In his new memoir, Dominick Dunne describes how he found fame the old-fashioned way: He yearned for it. 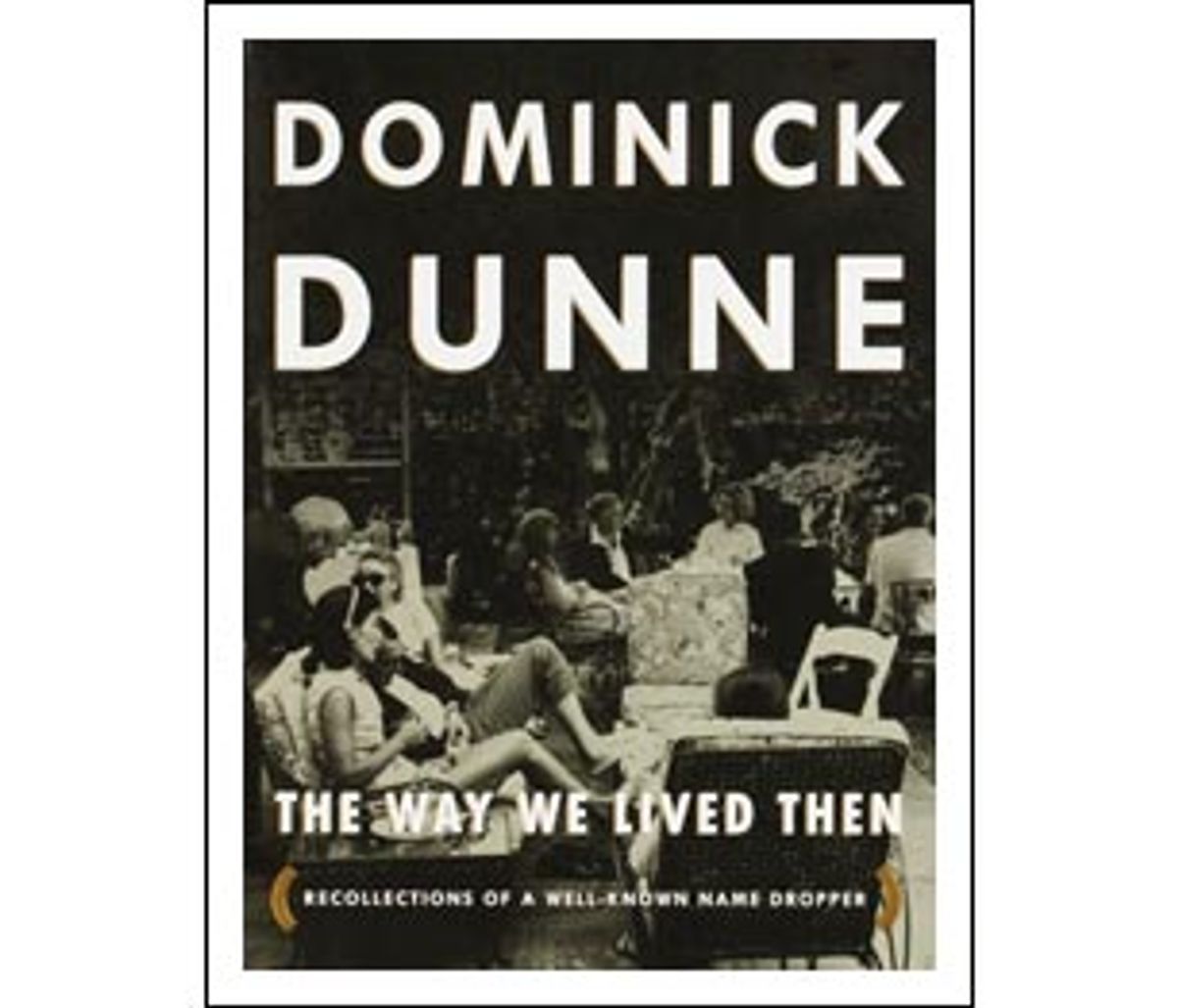 As name-droppers go, I'm no Dominick Dunne. Most of the names I could drop I met in the line of duty, writing profiles of movie actors for fashion magazines. Since those people were promoting films and their own careers, and since talking to me was often a contractual obligation for them, it's impossible for me to front. ("I was talking to Keanu a few weeks ago ...") It's like saying you scored with a prostitute.

But Dunne -- bestselling novelist and "special correspondent" for Vanity Fair -- was by his own admission a "natural born star fucker ... before I'd even heard the term." His new book, "The Way We Lived Then: Recollections of a Well-Known Name Dropper," brings the pastime to a new level: The memoir is a cluster fuck of celebrity, crisscrossing (as he has) the worlds of Hollywood and New York, entertainment and society as effortlessly as a butterfly. Though the book offers plenty of evidence of his access to the lives of the rich and famous and features more recognizable names than Liz Smith's Rolodex, I can offer my own humble testimonial to his ubiquity in several social worlds, while attempting to drop a few names myself.

I went to Dennis Hopper's wedding party about four years ago. Actually it was the third reception held for his fifth marriage (to Victoria Duffy) and was held at the Manhattan home of artist Julian Schnabel. I had no business being there: An editor at a fashion magazine had invited me; they were going to run pictures of the fete and asked me to write a few words to accompany the photos. She canceled at the last minute (health reasons, as I recall) but still wanted me to attend. To make matters worse, Schnabel -- a man who is politely reputed to be temperamental -- did not want to see some fucking reporter standing around with his notebook out and did not want me bothering the guests. In short, I was supposed to blend. Tough when nearly everyone else in the room had their own A&E "Biography" special in their future.

From the art world there was Schnabel, of course, and David Salle, Ed Ruscha, Roy Lichtenstein, Mary Boone and more. (Hopper is a painter himself and an avid collector.) The Hollywood presence was mostly old school: Jennifer Jones (whose film career began in 1939), the late Roddy McDowell, James Coburn and a number of producers, directors and screenwriters. ("Most of my friends were working," Hopper told me later. "Working or dead. I guess it's about the same.") And for real literary chops there were both Allen Ginsberg (already looking wasted from the cancer that would take him) and Norman Mailer, who spent considerable time talking to each other.

But in the midst of it all there was one man who was getting what ceramic artist Ron Nagle would call "the full cheese," one guy everyone gravitated toward and paid obeisance to. Where a lot of these famous people seemed to know each other more through name-and-face recognition, this little white-haired guy in the owlish glasses seemed to know them all. He took all comers on with a handshake or a kiss and scanned the periphery with a practiced eye. (He made eye contact with me and did the shutter-blink of nonconnection: You're nobody.) It was Dunne, of course, and his presence there -- his importance there -- is a testament to his survival skills, his tireless mingling and scene-making and the fickle hand of fame that (as he has said of Hollywood) forgives every sin but failure.

Dunne can also be held responsible for a new level of celebrity journalism (which someone once opined is to real journalism what military music is to music). Not the kind that I wrote, a simple profile of a celebrity. Not even the kind abundant in magazines today in which a celebrity profiles a celebrity. No, what Dunne hath wrought is the sort of celebrity journalism in which the journalist himself is a celebrity by dint of knowing celebrities. (Examples can be found in the current issues of Vanity Fair and Talk, just to name a few.) It's a hall-of-mirrors trick and not an easy one to pull off: You have to have fucked a few stars yourself. And as Dunne makes abundantly clear in his breezy, occasionally alarming narrative, there is a definite price attached.

Dunne grew up in Hartford, Conn., Irish Catholic in a world of wannabe WASPs. His father was a renowned heart surgeon; his brother, John Gregory Dunne, became a writer of note himself. But Dominick suffered from "demons of inadequacy" that will seem familiar to many an Irishman. In the pages of "The Way We Lived Then" (which looks like a coffee-table book, chock-full o' the author's own black-and-white photos, and reads like a magazine article) he describes his first visit to Hollywood as a child. "On the tour bus that took us to the movie-star homes," he writes, "I sat right next to the guide so I wouldn't miss anything; actually I knew more about the stars than the guide did, although he knew all their addresses." That would soon change.

Working as a stage manager in New York and Hollywood, Dunne managed to finagle his way into parties thrown by such bona fide royalty as Humphrey Bogart and Lauren Bacall -- a star-studded event that ended with everyone jumping in the pool with their clothes on. "I jumped in, too," he writes. "I wanted to be part of it. I thought to myself, This is how I want to live."

Problem was he couldn't afford it. His lust for celebrity was greater than his cachet -- until he married Ellen "Lenny" Griffin, an heiress to a wealthy American railroad manufacturing fortune and several stations above Dunne's. ("I never told anyone that she was kicked out of the Social Register when she married me," Dunne writes.) In 1957, when he was 30, the Dunnes moved to Los Angeles, where he worked for CBS's classy "Playhouse 90." Soon the Dunnes were carrying on like Sara and Gerald Murphy, entertaining constantly, keeping the names on their invitations au courant at all costs.

With this fascination with celebrity came a fixation on the crimes and murders of the rich and famous that bordered on the ghoulish. From the death of Lana Turner's gangster boyfriend, Johnny Stompanato, to Dunne's ringside seat at the O.J. Simpson trial (which he covered for Vanity Fair), this book features more beautiful corpses than a James Ellroy novel: Sal Mineo, Natalie Wood, they're all here, culminating in the death of Dunne's own daughter, actress Dominique Dunne, who was murdered by her stalker ex-boyfriend in 1982.

The chickens really come home to roost in Dunne's tale, darkening the sky by story's end in a way that gives this trip through celebrity city a gravitas that would otherwise be lacking. The myriad recountings of fabulous events grows wearying at times. The Dunnes threw the first Black and White ball in 1964. Truman Capote attended and then famously imitated the affair in New York a few years later, without inviting them (the bitch!). Dunne also conjures up a dinner party at David Selznick's house that included Dennis Hopper and his first wife, Brooke Hayward (the daughter of Hollywood agent Leland Hayward and Margaret Sullavan and the author of "Haywire," a classic growing-up-crazy showbiz bio). The Hoppers had just lost their house in a fire and Hayward began crying hysterically as Hopper and Dunne's wife discussed Rimbaud while maids in black-and-white uniforms scurried about with desserts. It's like a scene from Luis Buquel's "The Discreet Charm of the Bourgeoisie," and you half expect revolutionaries to appear and machine-gun them all. Which, in a sense, they did.

By the late '60s, everything was changing: "Hairdressers started to be invited to parties," Dunne writes with a straight face. One of those hairdressers, Jay Sebring, was murdered by the Manson Family, along with Sharon Tate and Abigail Folger. Things weren't going so well for Dunne, either. Drunk and stoned most of the time, he lost his wife, his family, his home and his job. He was busted for bringing pot in from Mexico. He was repeatedly humiliated by the very society he had feted. Lowest of all, he even sold his Westie.

Dunne tells the story of his own demise with remarkable candor. "Today I think the reason I write assholes so well in my books is that I have the experience of being one," he says, and reading his misadventures, it's hard to disagree. The story of his recovery (he sobered up and began writing at age 50, God bless him) is brief yet inspiring -- the kindness of strangers, really -- and his ultimate success is the book's final irony. Having been shunned by society, he paid it back in kind. He helped a reporter from the Washington Post uncover the David Begelman forgery scandal (around which Hollywood had built a wall of silence) and used the lives of those he had known as fodder for his novels. "My rationale," he writes, "was that if I didn't do it, someone else would have, and that writer might have been less judicious than I had been in presenting the story."

By the time I saw him at Hopper's wedding reception, more than 20 years after his return from purgatory, a lot of those same people were kissing his ring. His own celebrity came in fashions both unfortunate (his daughter's death) and fortuitous. His influence on both Vanity Fair and Talk are no coincidence, given his debt to Tina Brown. It was she who brought him to VF and he thanks her profusely. Though his magazine writing is often lazy and unfocused, he brings the gold of celebrity journalism -- access -- to many of his stories and keeps the customers satisfied.

"The Way We Lived Then" is not entirely a guilty pleasure; there are some remarkable stories from One Who Was There, pictures of beautiful people at their leisure and some evocative writing. The downside of Dunne's legacy is the fixation on writer status, as though an old-fashioned outside journalist couldn't get the story. The November VF, for example, finds John Richardson writing again on his pal Picasso, while deep into her profile of Viacom's Sumner Redstone, Judith Newman reveals that he is her father's first cousin (both access and inside dope).

More alarming is the November Talk profile of French Vogue editor Joan Buck. Buck is enjoying some success there; the magazine's numbers are up and she has been accepted into the shark-filled waters of Paris fashion. More to the point, she is famous by association (her father was a blacklisted Hollywood screenwriter; she is a close friend of Anjelica Huston) and pals to many in New York publishing, including Times theater critic Ben Brantley, Elle Decor editor Marian McEvoy and probably Brown, too.

All of which blurs the line a little bit more: Who are the celebrities, who the journalists? Dunne was profiled on CNN last week and I expect to see more on him soon. And he is as straightforward about his love of fame and its trappings as any old lady buying a copy of the National Enquirer (or Vanity Fair) at the supermarket. He gives good dish, he reckons, and you get what you pay for. (His book is $27.50, by the way.)

Besides, even those at the banquet often leave hungry. As my close personal friend Dennis Hopper told me a few years ago, after his party, "I wish I had a picture of myself with Allen Ginsberg and Norman Mailer."