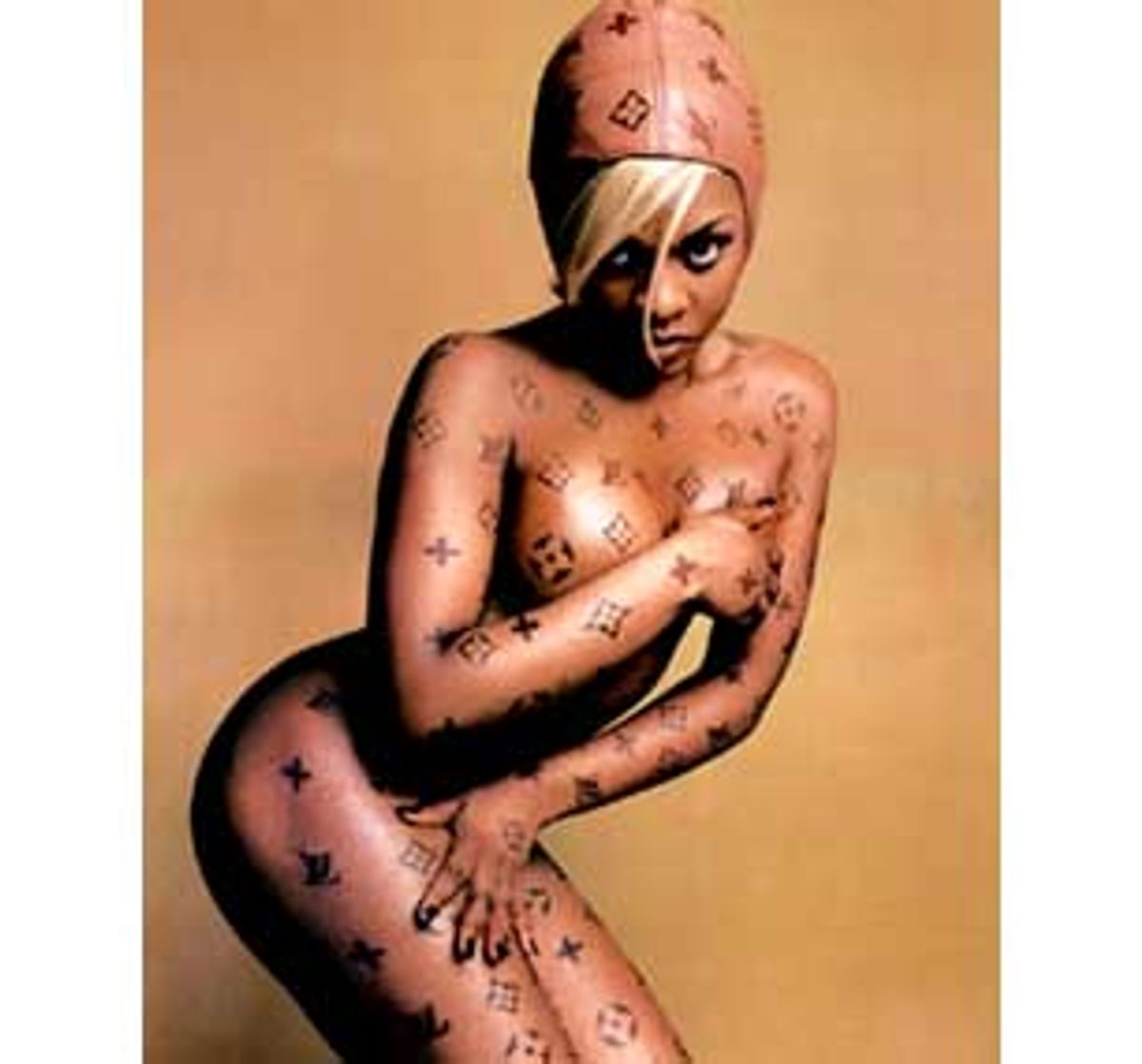 Suddenly, photographer David LaChapelle is everywhere. In a breathlessly short period of time, his gaga colors and anything-goes aesthetic have recharged slick magazines (Interview, Rolling Stone, Vanity Fair and Details), amped up moribund video visuals ("Dandy Warhols"), and added his brand of kink to print campaigns (Pepsi, Levi's, Diesel jeans, Jean Paul Gaultier perfume, Camel and Bass Ale.) Photography first must be a treat for the eye, and LaChapelle's photos are that, earning the admiration of Richard Avedon, for one, who likens the 36-year-old New Yorker to the surrealist painter Reni Magritte.

His work -- packed with enough humor to soften his often mordant observations -- celebrates the sickest side of pop culture. Even the titles of his books, 1996's "LaChapelle Land" and this season's "Hotel LaChapelle," hint at what's up in a typical LaChapelle picture -- an alternate universe of polymorphous perversity, all bright colors, buff dudes and bodacious ta-tas.

Social satirists are rarely rewarded as richly as LaChapelle, especially by Madison Avenue. But while his advertising work does not necessarily exhibit the deviant daring of his editorial efforts, his work in both areas is remarkably consistent in tone. As visual culture has shifted from the printed page to the electronic screen in the past decade, LaChapelle's work proves the page can still pack a punch. Bucking a design trend that's reduced most magazine photos to Band-Aid proportions, his pictures demand to be run big.

LaChapelle, like Annie Liebovitz 20 years before, redefined the celebrity portrait. But Liebovitz colluded with her star subjects to create (with warm lighting and informal poses) a manipulative and ultimately cynical mimicry of naturalness. LaChapelle has a manifestly different agenda; nothing is natural in his pictures, least of all his celebrity sitters. His photo subjects' artifice (and inanity) is worn as a badge of pride, and LaChapelle's celebrity portraits venerate -- rather than disguise -- the manipulative nature of all images. Life is a movie, and "Anytime you aim a light," he says, "you change reality."

Gay and out since his teens, LaChapelle uses an iconography drawn more from the works of Paul Cadmus and William Burroughs than of Edward Weston and Edward Steichen. In a nation where the Village People's "YMCA" has become a beloved sing-along at sporting events, the acceptance of LaChapelle's work is another large indicator of the merging of gay cultural sensibilities with the mainstream.

Born in a picturesque corner of Connecticut, LaChapelle moved at age 12 to North Carolina. "It was a boom town," he says. "Strip-mall culture, housing developments going up almost overnight. It introduced me to the scary and banal landscape that America is." He has written that he was "tormented at school," explaining in an Advocate interview, "I looked weird; I acted weird; and I wore my sexuality on my sleeve." His parents accepted who he was and, he says, did much to protect him from the harsh Bible Belt climate.

In 1978, at 15, he moved on his own to New York and landed a job bussing tables at Studio 54, then in its hedonistic heyday.

"I loved seeing people, celebrities, behaving outrageously," he says of that time. "I liked the colorfulness and strangeness of the '70s."

LaChapelle did a quick stint at art school in North Carolina in the early '80s, but was back in New York by 1984 when, after meeting Andy Warhol at a Psychedelic Furs concert, he got his first photo job shooting pictures for Interview magazine. "The one thing I learned working at Interview -- Andy would say, 'Do whatever you want. Just make sure everybody looks good.'" Taking the wisdom to heart, LaChapelle quickly became a downtown darling, shooting for European and the smaller fashion magazines.

In an Adweek interview, he credits a 1994 Details assignment, photos of up-and-coming rock musicians with their parents, with clarifying his style. "It was a breakthrough ... These pictures were the real America gone mad."

"For years," he says now, "all I wanted was to make enough money shooting pictures to survive in New York. I never expected this." "This" began with the 1996 publication of "LaChapelle Land." "It was the first time people got to see the range and scope of the work I'd been doing, finally brought together in one place."

A gorgeous color production set in an eye-catching box, the book gave LaChapelle currency in idea-starved agency art departments everywhere. His '96 MTV commercial depicting elderly imitators of Madonna and Courtney Love in a "Whatever Happened to Baby Jane" scenario helped turn the buzz into a roar.

"He's the Zeitgeist photographer of the '90s," says American Photo editor, and LaChapelle fan, David Schonauer. "He captured the moment not only stylistically, with his color and by celebrating trash culture, but also technologically with his use of computers. It just looked right."

LaChapelle's pronounced use of special digitized effects caused a stir two years ago when actress Mira Sorvino took public exception to the way he morphed her image, photographed for an Allure magazine spread, into a simulacrum of Joan Crawford (adding period clothing, makeup and a young Christina stand-in.) The dust-up prompted yet another media debate over the "reality" of photography and caused LaChapelle to hire a publicist to counter what he considered cheap shots, which began appearing in the New York tabloids. "It was all very Joan Crawford," he says now of the incident, which faded away without the threatened lawsuit. (The photo in question is not in the new book.)

LaChapelle says that if there is one misconception about what he does it is how much his pictures depend on computerized special effects. Certainly the work's strongest virtues -- set designs, locations, lighting, clothing, make-up and casting -- all come from the fervid brain and considerable skills of the photographer and his associates. (LaChapelle is exceptional for the public credit he gives his production team, a group that has worked with him for years.) And the pictures that work best in "Hotel LaChapelle" have the tang of real life included in the mix. Even so, with his every photo buffed to a bright candy-colored gloss, LaChapelle's current work would not be possible without the computer-enhanced color of the modern printing process.

Hot magazine photographers now become art stars with little fuss, and LaChapelle is no exception, having mounted shows at New York's Staley-Wise and Tony Shafrazi Galleries. The favored critical term given his work is "surrealist," an obvious tag that he, rightfully, rejects. Asked if he is a satirist, LaChapelle says he prefers to think of himself as a documentarian. "Not in the traditional sense, in that I'm creating these things. But I do feel these are [portraits of] people making up our world today." If his favorite subjects -- Madonna, Leonardo DiCaprio, Marilyn Manson, Devon Aoki, Mark Wahlberg -- lack a certain cultural gravitas, his work is not confined by their pop parameters. LaChapelle's photography is all flesh and blood; extravagantly immediate. His photos connect more to
the visceral pleasures and terrors of the theater, and its origins in ancient religious sacrifice, than to the rather abstracted cerebral feelings usually aroused by film.

LaChapelle's portraits do not celebrate celebrity so much as devour it. Of course, celebrity consumed returns as an indelible imago - a god ready to be eaten again and again. LaChapelle is clearly in touch with how this active process of deification works today. "Pictures are an escape. They should be bigger than life. In the same way, celebrities provide an escape from the mundane. They are photographed so we can worship them -- so they are worthy of our worship." He speaks the last sentence in a camp-reverent tone which does not undercut its essential truth. No photographer's work has better exposed that orgiastic extremity of fame.

Joe Gioia has been a senior editor at Modern Photography, a contributing editor at American Photo and a Camera columnist for the New York Times.