The overthrow of Pakistan's publicly elected government may bode poorly for democracy, but who's crying? 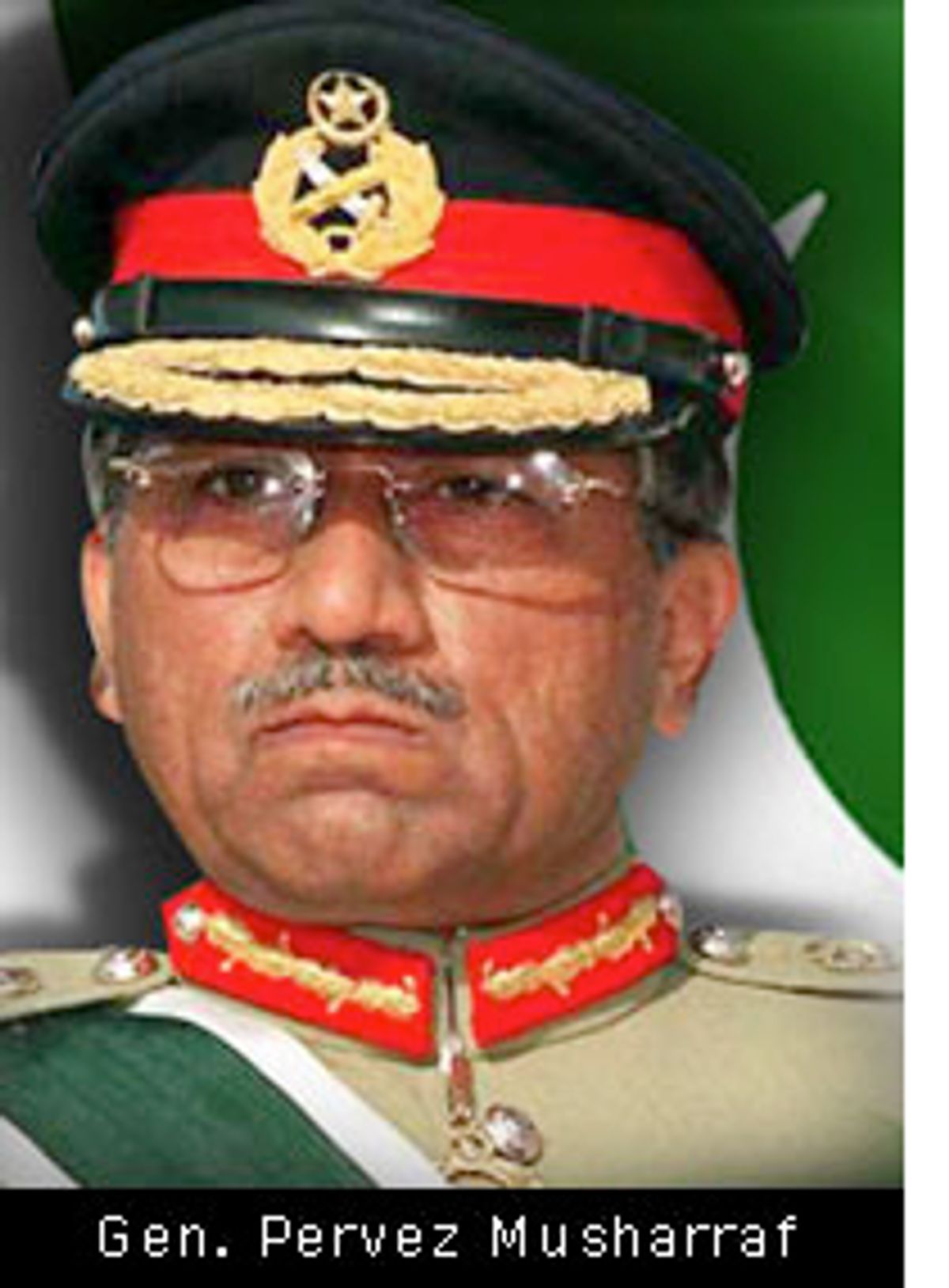 Gen. Pervez Musharraf's successful military coup in Pakistan Tuesday surprised few of those who have been following the deteriorating situation in the South Asian country recently.

The takeover came after Prime Minister Nawaz Sharif tried to fire Musharraf on Tuesday afternoon and replace him with a former head of military intelligence. Instead, Musharraf ordered his troops to arrest Sharif, close down the Islamabad airport and secure the national media.

Appearing on state television, Musharraf stated: "Despite all my advice, they tried to interfere with the armed forces, the last remaining viable institution in which all of you take so much pride and look up to at all times for stability, unity and integrity of our beloved country."

For the past 10 years, the country has been ineptly ruled by an alternating team of prime ministers -- Sharif and Benazir Bhutto, the latter awaiting trial on corruption charges. During this time, Pakistan's economy has declined drastically.

The downward spiral went out of control last year, after Sharif ordered nuclear weapons testing in what was widely interpreted as a challenge to neighboring India. Serious border disputes between the two countries have flared up anew in recent months, leading to the imposition of sanctions against Pakistan by Western governments. The International Monetary Fund and World Bank have temporarily stalled loans that had been keeping Pakistan's sinking economy afloat.

Sharif initially supported a move by Pakistani infiltrators (now widely believed to have been Pakistani soldiers) into the disputed Kargil region of Kashmir last year, then ordered them back to Pakistan under pressure from the White House. The retreat outraged Pakistani military leaders and provided the context for Tuesday's coup.

A number of experts discussed the coup in Pakistan and its implications for regional stability with Salon News.

Howard B. Schaffer is director of studies at the Institute for the Study of Diplomacy at Georgetown University and former U.S. ambassador to Bangladesh.

The overthrow of Sharif by the military did not come as a surprise.

There [was] an awareness on the part of the army that Sharif had failed in many primary areas of governance and had become unpopular, setting the stage for it to intervene without serious concern about adverse public reaction. Its hand was forced by Sharif himself, who sought to dismiss the army chief -- a move which he had been successful at a year earlier when he dismissed Musharraf's predecessor -- which led to this army reaction. The most serious failure has been on the economic front.

Another failure has been on the law-and-order front. There's been increasing sectarian violence between extreme shia and sunni groups. There have been allegations, which I fully credit, of considerable corruption. There has been tension between the majority state [the Punjab province and home of Sharif] and the four smaller provinces. This is a laundry list of failures.

There has been very little hope that there could be substantial change in any of these areas. Sharif has been unwilling to crack down on those of his supporters who have had their hand in the cookie jar. He's been unwilling to take politically risky measures to improve the revenue situation. He failed at Kargil and he created a foreign policy situation where Pakistan has very few friends in the world.

We don't know much about Musharraf except that he's a professional military officer ... He is considered a secular person -- I'm sure he's a faithful Muslim -- but he is not seen [as some other generals have been] to be inclined to an Islamic view of things. Allegations that he may lead Pakistan to take a more Islamic-oriented policy, especially vis-a-vis the Afghanistan situation, seem ironic when you consider that the guy whom Sharif proposed to replace him [Gen. Khawaja Ziauddin, head of the military intelligence] has been seen to have strong Islamic ties.

It's a blow to U.S. foreign policy. The attitude of the U.S. government toward the Pakistani regime is going to depend on what kind of polity emerges in the next day or so. The Pakistani generals are still consulting among themselves to decide what to do next. The [option] favored by Washington would keep the present parliament in place but remove Sharif and a few figures associated with him. And then create a new, duly elected government comprising parliament but excluding these figures. The second approach, most favored by Pakistani elites, would create a substitute government of technocrats -- senior officials and retired figures -- and have them serve as a caretaker government to clean up the messier elements in the three months leading up to elections. This follows the pattern used earlier in the decade.

Robert Hathaway is director of the Asia program at the Woodrow Wilson International Center for Scholars.

The real triggering event was Sharif's decision in July to withdraw the Pakistani troops who had infiltrated Indian territory in Kashmir. What happened was Sharif saw Pakistan was taking a military beating in Kashmir, and an economic beating at home and in the international community. But the roots of the problem go back further than this summer.

The last military dictator of Pakistan was killed in 1988 in an as-yet-unexplained plane crash. Since then, Pakistan has had a succession of weak administrations, none of which finished out their constitutional lives.

The Pakistani military had become increasingly disillusioned ... By any measure, the economy is going down the tubes. The social indicators are terrible. Whether you talk about literacy, infant mortality, people who live without electricity or health care, it's staggering.

What Pakistan has had since 1988 is poor leaders. Sharif was prime minister twice, [Benazir] Bhutto twice. But neither demonstrated any real ability to govern or meet the needs of the people. Both surrounded themselves with corrupt officials.

I don't want to overemphasis it, but another factor is the role that Islamic radicals have played or might play in the takeover. To many Islamic radicals, Kashmir was a holy war, and the pullout by Sharif was not only a betrayal of the nation, but a betrayal of a solemn religious obligation to help their Muslim brothers.

There are things the U.S. can do, has already done, and should do in the future. First, we need to recognize that our influence is limited ... We should send a message that we have no intention of conducting business as usual with Pakistan. This means that we will vote in the World Bank against loans to Pakistan. It means we will use the United Nations and other international forums to highlight what has transpired. It means that we will not give them diplomatic support in the disputes with India or other countries. Not so long as the military is in power.

Marshall Bouton is executive vice president of the Asia Society.

The political institutions in Pakistan did not acquire the roots in the national body politic that would help them over time. There was always this tension and between the government and the military. You had a relationship of distrust that in turn undermined the development of a political elite.

Success of military coups in the history of Pakistan varies widely. There is a widespread expectation that this new regime will lay out some kind of phased plan that will go from something short of martial law to technocratic, non-elected civilian government to full democratic control.

It will be difficult because the political institutions and the elite are not strong enough to sustain such a plan, so there's no one whom the military can look to, to carry out this plan.

The United States has to send a three-layered message to the new military leaders:

1. We don't approve of extra-constitutional changes of government, period.

2. We expect them to lay out a plan for return to civilian authority and eventually some legitimate democratic process.

3. This is a message best sent privately: We would be strongly opposed to any steps that would raise tensions with India. We expect the new government to not do anything to raise tensions and actually to find a way to reduce them.

They must recognize -- if their purpose is to safeguard the integrity of Pakistan -- that the path to that does not run through conflict with India.

Stephen Solarz is a senior advisor on South Asia at the Center for Strategic and International Studies.

Considerable thought had been given to this [coup] for some time.

From the inception of Pakistan, the military assumed the dominant role in the affairs of the nation because the nation's founder died not long after Pakistan became independent. In India, [Jawaharlal] Nehru served as prime minister for close to 20 years, and he was very committed to the principle of parliamentary democracy, and civilian supremacy played a critical role in institutionalizing these principles.

There was no comparably legitimizing figure in Pakistan.

Civilian lack of reaction to the coup has largely to do with the fact that the economy is in a shambles, and the regime was inept at dealing with the problems of the country. It was mired in corruption, as were previous administrations. Also, the decision of Sharif to pull troops out of Kargil was seen as humiliating.

Andrew Koch is a reporter at Jane's Defence Weekly and an expert in South Asian nuclear proliferation.

The coup came as a surprise to Sharif. He clearly thought he could get rid of Musharraf. But when he tried to fire him, it was the straw that broke the camel's back. Sharif was immensely unpopular. There have been signs for weeks that something might happen. The United States warned the Pakistani military recently not to do something like this, and Sharif expected the United States to save him. But in the end what could we do?

It's too early to say what's going to happen to the long-term government. Everybody's in a wait-and-see mode to see what the army's going to do. It doesn't really affect their nuclear stockpile -- it was already under the control of the military and now remains that way.

Musharraf might be a bit [hawkish] compared to past Pakistani generals, but typically it's the political leadership that's been causing the biggest problems. They tend to go for the demagogue rhetoric in Pakistan to whip up political support. Both Sharif and Bhutto have been guilty of lambasting India as a huge threat and said that their opposition hasn't been doing anything to safeguard against that threat. A lot more so than the military. People are saying that Musharraf is hawkish because he was the guy behind the Kargil [Kashmir] attack this summer. But I would caution that he is not whipping up, nor has he ever to my knowledge, Pakistani concerns vis-a-vis India like the political leadership has.

In terms of security in the region, if Pakistan could return to democracy in a solid form, that would be an immense help in stabilizing relations. But that's predicated on the economy. [The economy in Pakistan] is a disaster. It was in very bad shape before the nuclear tests, but sanctions really hurt them. The country has suffered through many years of very poor governance. Bhutto was incredibly corrupt, and now she's under indictment. Sharif is by many accounts just as corrupt. The level of his corruption hasn't come fully into light because he jailed journalists and successfully ousted judges and put them under his control. With him out, it will be revealed how corrupt his regime was. These two leaders have traded off -- one had led and then the other and back and forth for at least 10 disastrous years. Pakistan went on a more precipitous slide after the nuclear tests with the international sanctions and the temporary withholding of World Bank and IMF loans.