Has the influence of the New York Times Bestseller List declined? 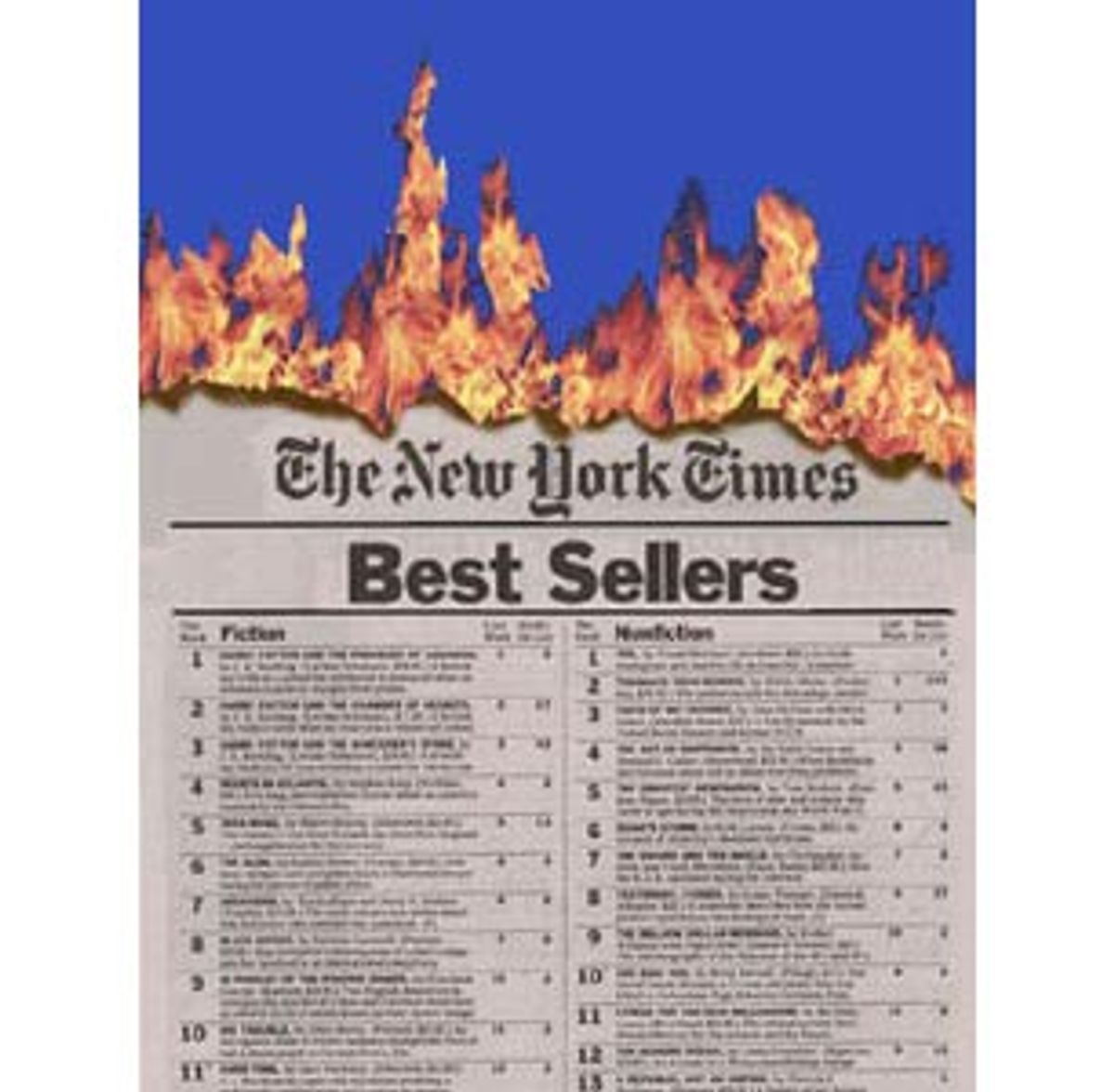 The New York Times Bestseller List turns 64 this year, and the venerable institution that has long been a gold standard for publishers and booksellers is facing complaints that it can't keep up. Barnes & Noble is foremost among those who are implying that it ought to be retired. The national chain of 1,000 stores -- with $3 billion in sales, which make up 15 percent of total book sales in the country -- has decided it will no longer rely on the Times' list as a key part of its retailing strategy.

As of Wednesday, Barnes & Noble's bricks-and-mortar stores will post their own bestseller list. The Times' bestsellers will be upstaged at the front of stores by displays of B&N's own bestsellers. (Discounts offered to customers on the books -- 20 percent for paperback, 30 percent for hardcover -- will remain the same for both lists.)

Does B&N's demotion tarnish the credibility of the Times list? Insiders at the Times describe the bookseller's decision as mere muscle-flexing: B&N's way of announcing that it is in the driver's seat of the book industry. Other members of the publishing industry don't think B&N has eroded the clout of the Times' list. "The Times is still the Times," Simon & Schuster publisher David Rosenthal said. "Certainly there are more bestseller lists today than there were five years ago, and everybody tries to read into those lists as much as they can to benefit their books. But there is something about the Times -- at least you know that care and thought goes into this. That gives it a tremendous cachet."

To collect and analyze information for the bestseller list, the Times uses its news survey department, which also handles joint polling projects with CBS. In a recent interview, news survey editor Michael Kagay explained how he puts together the bestseller list. The Times draws on sales figures from questionnaires filled out by hundreds of stores across the country, stores of different sizes and demographics, as well as wholesalers such as cost clubs and, recently, e-commerce sites. The Times does not, however, survey specialty shops such as mystery bookstores or children's bookstores.

"Basically, the list is done in the same way that public opinion polls work," says Kagay, a 12-year veteran of the Gray Lady who is a former Princeton professor with a background in political polling. "It's very much the same methodology. It depends on random sampling and checking every week to see that all the regions of the country are properly covered and the size of the stores are properly covered. You've also got to make sure that the ratio of the chain bookstores to the independent bookstores is right. If chain sales and independent sales equaled 100 percent, the ratio would be roughly 60 percent chain, 40 percent independent." (The American Booksellers Association estimates that the ratio nationwide is closer to 57/43.)

But how in touch with recent bookselling trends is the Times list, especially given that the last five years have been arguably the most volatile in the industry's history? "Every four to five years we do a census so that we have an idea at any given time of how many there are, what size they are, what volume of business they do," Kagay says. "We ask some other questions, like 'Do you use computers in your store?' At any given time, we have a pretty good picture of the retail bookselling universe in the United States."

Though this four-to-five-year gap between censuses may make the Times' sample seem like a statistical Rip Van Winkle, Kagay makes the case that his department still pays attention to important shifts in the bookselling universe, and will make changes between censuses when it deems them to be appropriate. "Independents used to dominate the book market, but a couple of years ago, it tipped in favor of the chains." It was as a result of this shift, Kagay said, that the Times modified the ratio of bookstores it polls to the current 60/40 split. It has also posted an independents' bestseller list on its site. (There is an interesting Times phenomenon: Even though J.K. Rowling's Harry Potter series now occupies the first, second and third places on its list, the books' sales are probably undercounted because the Times doesn't survey children's stores).

Kagay says that when online booksellers such as Amazon.com came along in the mid-'90s, at first the Times didn't include the upstart retailer in its polling, but later changed its mind. "A few years ago, if you looked at what was selling, it was books for techies, but it grew. Now they're very much in line with what's selling in general. We do count their sales. And we're increasing the number of online sellers who report to us." (According to an ABA estimate, online sales represent 6 percent of sales in the book market, and 80 percent of those belong to Amazon.)

As some independents see it, however, the Times slants its questionnaires toward the chains by supplying a preselected list of books to check off as bestsellers, then blank lines to fill in any titles not on the list. For instance, the September checklist featured such familiar titles as Stephen King's "Bag of Bones" and Wally Lamb's "I Know This Much Is True," and included sleeper hits like Phillip Gourevitch's "We Wish to Inform You That Tomorrow We Will Be Killed With Our Families: Stories From Rwanda."

While chains fill out their surveys from their corporate headquarters, independents will often nominate one employee to fill out the Times questionnaire on a weekly basis. The sales of independent bookstores tend to rely more heavily on publisher's backlists and other titles that may not have made the radar screens of the Times or the chains, so the questionnaires can be a nuisance, since clerks may have to write in nearly half the titles. "Neither the Times nor the [Washington] Post reflect our own sales patterns," says Mitch Brown, the general manager of Kramer Books, an independent store in Washington. "These lists have turned their focus to chains."

Nevertheless, the fact that some independents still submit these questionnaires reinforces the Times' clout. "I think that its influence has grown," says Andy Ross, the owner of Cody's Books in Berkeley, Calif., who submits his sales information to the Times. An outspoken critic of the bestseller list, Ross nonetheless thinks that stores still need the Times. "Chains use it with a vengeance. All sales reps care about is the New York Times list. It's grown in tandem with the chain booksellers." He also pointed out that publishers often use the list as a basis for authors' bonuses. He also notes that authors have an extra incentive to make public appearances and otherwise boost sales in bookstores polled by the Times.

Another common complaint is that the list's meticulous but slow genesis makes for a week's time lag between sales and the Times' reporting of them. In the case of Edmund Morris's "Dutch: A Memoir of Ronald Reagan," bestseller lists in Publishers Weekly and the Wall Street Journal have already reflected the brisk sales of the controversial biography, while the Times list won't feature it until this Sunday. In an effort to bring itself up to speed, the Times posts the list on its Web site two days before the Book Review's publication date.

One advantage Barnes & Noble gains from using its own bestseller list, spokeswoman Debra Williams says, is that "the customer can get ahold of the list in a more expedient way. It is a service we provide for our customer, so they have an up-to-the-moment idea of what other customers are reading." B&N competitor Borders has already instituted what it calls an "instant bestseller list" that it promotes in its stores. The benefits are clear: Borders can offer competitive discounts on books that it knows are hot, rather than waiting for the Times list in order to award discounts.

Times editor Kagay relates that when the Wall Street Journal and USA Today began publishing their own lists six years ago, Times editors discussed moving the bestseller list out of the Book Review -- which closes 10 days before its publication date -- and into the daily newspaper in order to get the list out more quickly. In the end, however, the staff nixed the idea, claiming that the change would disorient readers, who had been reading the list in the Review for more than half a century. "It was a weighty decision," Kagay notes.

Despite these criticisms and Barnes & Noble's decision, Kagay says that the Times will stick to its current schedule. Indeed, the B&N list has its own shortcomings. The Times, at least, has no obvious or immediate interest in the sales of individual books. How much of B&N's list will be an accurate reflection of sales, and how much of it will reflect its own in-house marketing strategy? If the retailer wants to push a title bought with high expectations but currently suffering lagging sales, it may order its stores to display the book more prominently to help it grab momentum and move it toward the bestseller list. Or, if the company decides that it needs new titles on a stagnant list, it may push fresh bestsellers to the top and eliminate books that are old news.

Even with the increasing skepticism expressed by bricks-and-mortar bookstores about the Times list, the burgeoning online bookselling industry seems to be sticking with it. Amazon.com, whose $1 billion in sales dominates the online market, just battled it out in court with the Times to retain the right to use the list on its site, and Barnesandnoble.com, a separate company from Barnes & Noble, also says that it will continue with the Times list. If the Internet is indeed the future of bookselling, then the Times is sitting pretty. And when you're nearing 65, that's no simple feat.