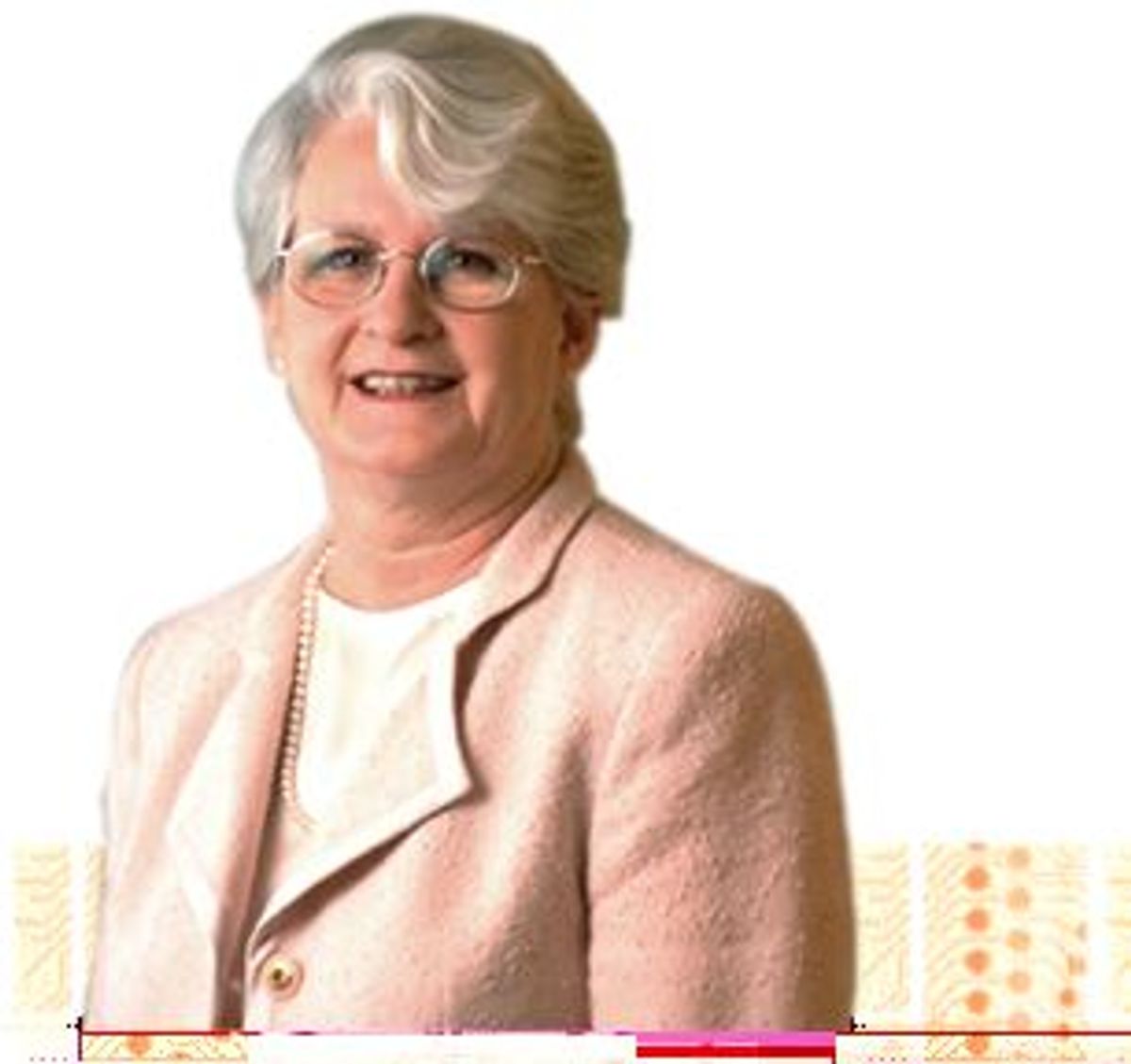 Ellen Hancock, CEO of Exodus Communications, is one of the highest-ranking female executives in Silicon Valley. But that's only part of what makes Hancock such a rare specimen in the high-tech world.

In an industry where 30-year-old executives are technology veterans, Hancock has spent more than 30 years shaping the way we get our computer information through networking hardware and software. And with her executive stints at IBM, National Semiconductor, Apple and now Exodus, you won't find a more varied résumé in the valley. She's seen the top from all sides -- from the corporate culture of Big Blue to Apple's let-it-be atmosphere.

Exodus, which Hancock joined in 1998 shortly before its IPO, is her first foray into Internet start-up insanity. So far, it's working for her. As an outsourcing provider for Internet systems, network management and development services, Exodus boasts such high-profile, high-traffic clients as Yahoo, Lycos, Hotmail and Geocities. Under Hancock's tutelage, Exodus has grown from 300 customers to over 1,300, has tripled its employee count and is expected by analysts to double its revenue in 2000.

As more big companies like Sun, HP, Fujitsu and Gateway see network outsourcing as the way to go for their fat sites, it could happen. Hancock, who once said her ideal-sized company has 15,000 employees, revels in the company's growth and accepts the growing pains as a welcome challenge. Hancock talked with Salon Technology about corporate growth and her other challenges -- Y2K, being female in Silicon Valley and finding spare time in a crowded CEO schedule.

Exodus is the ultimate behind-the-scenes player in high tech, providing the back end to all of these exciting front ends. Do you and Exodus prefer that role to a more glamorous profile like, say, a Yahoo or Amazon?

We are in that space called infrastructure, which doesn't sound like as much fun as Lycos or eBay. But as the Internet grows, people have really come to acknowledge the role of infrastructure. I think that definitely shows in the performance of the company, and the performance of the stock. I believe that where we are positioned now, we have leverage. We can work with other companies, including more high-profile ones, and have influence in the industry. It's definitely a different environment than Lycos or Amazon, but it's fun. At IBM, the networking division was also fun, but different.

And Apple was really different from that, I would imagine.

Actually, Apple and Exodus are much closer in attitude. Because of size, and because of type of culture, IBM was much more disciplined. At Exodus, we really took a lot from Apple. We have a lot of ex-Apple employees. We're used to the Apple style. While Apple was a reasonably large company, it still had a free-flowing style and we try to put that to work here.

You started at IBM out of graduate school and stayed there for 29 years. If you had to start your high-tech career over again today, what would you do?

I would go to IBM again. I learned a lot there. It's an excellent company, and very supportive of women in management. They gave me a lot of assistance. But today I would have come out to Silicon Valley earlier. I'm not unhappy with how it turned out, but those of us who joined companies in the '60s and '70s thought of our jobs in terms of lifetime employment. Today people are making more moves, and to some extent I think it's healthy to make those moves.

You've been in this business for a long time. What do you think of the mania today for treating Silicon Valley like the next Gold Rush?

I first came out here to work for National Semiconductor. That was definitely not a get-rich-quick situation. The same held true for Apple, as well as the other more mature companies. But now there are these new companies that are going public, and these companies are making millionaires out of their employees. If you asked me two years ago if I'd have the net worth I have at Exodus now, I'd have thought that was a strange question. But things are very different now.

Well, Exodus was definitely on to something with network outsourcing, but did anyone think back in 1994 that Web sites would be as big as they are today?

The size of companies is also different. We have a lot of young companies still coming in, but also sophisticated companies, like Sun's Java site. It's amazing how many technology companies are using Exodus. Sun, Fujitsu, National Semiconductor, Gateway, HP ... I could keep listing them.

Do all companies look the same from the back end?

What do you see most these days?

I've definitely seen more NT over the last year. A lot of sites are choosing NT for the front end, then Solaris, Unix or Linux for the back end. You'll still do things like search on a Unix system, usually a Sun, but the front end is diversifying as more people pick front-end Intel-based systems with an NT base. There used to be much more Unix. The one OS that has gained on the front end is NT. But it's still a mix.

Because of its ease of use on the front end. People want to use graphics. They want personality. They're using NT for that, focusing on the way the site looks to you as a consumer. Search engines will still usually be done on a Unix system.

Exodus is expanding at astonishing speed. As an executive, how do you handle that kind of explosive growth?

You can't reach the big revenue without growth. It's not that you have to be big, but you should be open to being big. We have a management team that has managed large-sized companies before. We're comfortable with that. We're not afraid to expand, to be in London, Tokyo, those kinds of places. We just make sure that we have the right people in place for growth. If it does get to a large size, we have more of a comfort level.

In a recent Fortune article, an analyst was quoted as saying, "As long as the Net grows, Exodus wins." Do you see that changing ever?

I have confidence that we will continue to see growth on the Internet for a long time. As more and more enterprises go to the Web, it will only get bigger, and they will need more network support. Now companies talk to us about supporting streaming media and graphics that will take even more network growth. As we impose more interaction with cable modems and more bandwidth, it won't stop.

This network still has a long way to grow. The Internet still has a lot to do in terms of becoming mature compared to other information networks we've seen. Our industry is working hard to add the support. It's fun to watch the technology mature, watch the Internet continue to grow. When Exodus went public our peak rate was 5 megabytes a second. Last time we measured the customers had it at 4.2 gigabytes a second. And it's grown since then. I have never seen this before in terms of rapidity and constant nature of growth.

Women often complain about the sexist nature of the tech industry, yet you've been in the business for a few decades. How do you handle being in the minority in high-tech -- not just a woman, but a woman CEO?

I'm one of those people who is an optimist on this subject. I've watched transitions, reviewed catalysts, and I see women on boards of directors. I see women in CEO positions. The fact that there is a women's CEO roundtable group in Silicon Valley means that there are more than two of us. Women are gaining -- you can see it all the time. If there is a negative, it's that there are so few woman CEOs in the Fortune 500. There's work to be done to ensure that women get to the top and don't hit the glass ceiling.

But if you feel there's a ceiling, that your company is not supportive, my advice is to find another one. It makes no sense to stay in an environment that isn't supportive. There will be someplace where you can grow.

You obviously thrive on the high stress of your business. Do you relax?

Relaxing is a hard subject for me. I'm going to give a weird answer, but it's nice to have a quiet Saturday to catch up on e-mail and work. It's nice to feel like you have control over a part of your life.

I have a commuting marriage. My husband is on the East Coast, I'm on the West. We try to have quality time, to go sailing at our place on Long Island. Reading is helpful. I don't have time to read novels, but I do a lot of books on tape. Right now I'm reading "Memoirs of a Geisha."

I compensate for the fact that I don't have a lot of personal time by enjoying the time I do have. You don't have a lot of personal time when you're running a company. Every little moment counts. You have to have a high energy level, and you have to like it. It's fun to be the CEO of a company that grows so fast in such a great way, has great employees, and great customers. That makes it worthwhile.

Julie Polito is a freelance writer in San Francisco.