An understated novel about life in the High Plains shines with a sophisticated optimism. 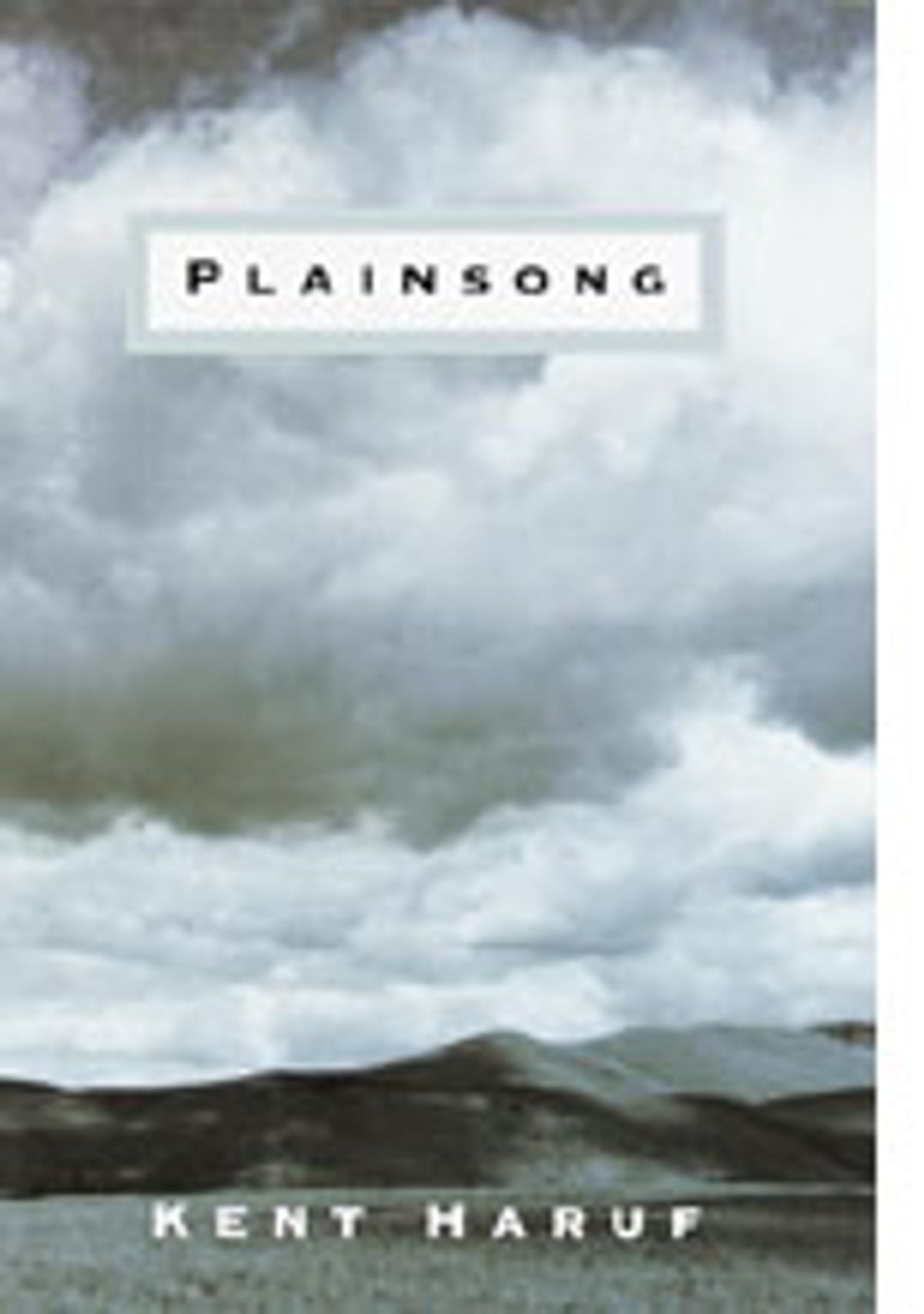 Reading Kent Haruf's new novel is like being in an expertly piloted small plane, finding yourself flying low and smooth over the suddenly wondrous world below. "Plainsong" (which was recently nominated for a National Book Award) lays out a year in the life of Holt, an unremarkable small town in the High Plains east of Denver. The cast includes a high school history teacher who stands up to ominous pressure to pass a failing student; two small boys whose mother is gradually disappearing into depression; a shy 17-year-old girl whose mother has found out she's pregnant and kicked her out; and two grizzled bachelor brothers whose life revolves around their cattle. These characters are as varied as they come, and yet in alternating chapters Haruf tells each of their stories with the same steady, unstrained rhythm and generous, unflinching tone, so that the unexpected intersections of his character's lives come to seem not just interesting but deeply, reassuringly right.

Tom Guthrie, the history teacher, is caring for his 9- and 10-year-old sons as his tormented wife becomes less and less able to function; she finally moves out of their lives permanently. Guthrie is the laconic moral center of the novel. He's by no means faultless or conventionally virtuous, yet the quiet dignity of his small daily acts reverberates in Haruf's understated sentences:

Guthrie brought two thick crockery plates of steaming eggs and buttered toast to the table and set them down and the boys spread jelly on the toast and began to eat at once, automatically, chewing, leaning forward over their plates. He carried two glasses of milk to the table.

He stood over the table watching them eat. I have to go to school early this morning, he said. I'll be leaving in a minute.

As Guthrie's sons, Ike and Bobby, bike through town on their paper routes or spy on teenagers at an abandoned house, we get a boys'-eye view of Holt that reminds us how much children witness when they're out of eyeshot: sex and violence and even death. Haruf is equally perceptive when he turns his attention to Victoria Roubideaux, whose unexpected pregnancy shows her how alone she is. He never asks us to pity her, and we come to admire the graceful doggedness she brings to a seemingly impossible situation. She's got enough sense to ask for help from the right people. For Maggie Jones, one of her teachers, to hook her up with the McPheron brothers, two lonely, bighearted old-timers short on social skills, is a potentially corny "solution," but Haruf makes it work by showing us the uncomfortableness of the arrangement and letting it play itself out slowly.

You could quibble with the quiet, almost ingenuous triumphalism that pokes through the novel. Troublesome figures, such as Guthrie's wife or the abusive father of Victoria's baby, simply go away. In real life, the people you dont want to deal with hardly ever disappear; they hardly ever willingly forfeit their stake in the things you care about. The trick is figuring out how to share the earth with them. The novel's brief, celebratory conclusion might have been even more effective if it had included one or two disagreeable people. But Haruf is not naive about human nature; he doesn't look away from violence, and he has a keen eye for the devastatingly casual acts of cruelty that punctuate daily life. He's simply convinced that decency is ultimately its own reward, and it's this optimism, along with the quiet sophistication of his technique, that allows him to look into the hearts of his characters while still respecting their privacy.