Melodramatic and ill-conceived, "Law & Order: Special Victims Unit" is so bad, it's a crime. 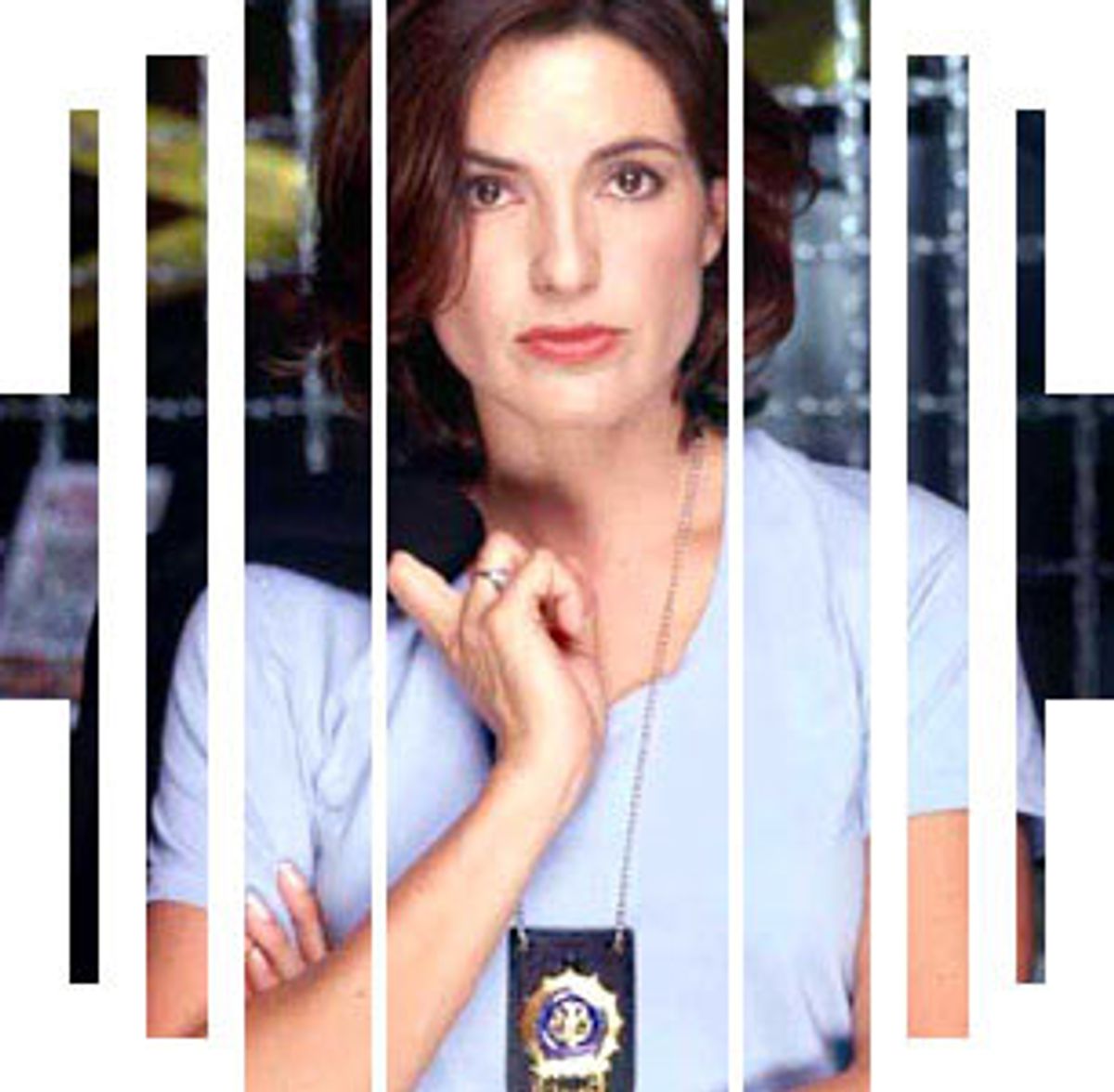 "Law & Order" is an efficient and hard-boiled police
procedural if ever there was one. With a half-hour allotted
to perp-catching and a half-hour allotted to the swift
prosecution of cases, "L&O" barely has time for characters
to catch their breath, never mind search their souls.
Compared to the operatic emotionalism of "NYPD Blue" and the
Dylanesque vision that was "Homicide: Life on the Street,"
"Law & Order" is a Woody Guthrie folk song -- plain, terse
and packing a wallop.

How to describe, then, the tear-jerking bombast and
in-your-face confessionalism of its woeful spin-off, "Law &
Order: Special Victims Unit"? Imagine Celine Dion duetting
with Paula Cole -- cranked up to 11.

Sure, it looks like "Law & Order" -- same opening
credits, same theme song, same clanging cell door sound
effect at the top of every scene, weekly cameos from "Law &
Order" regulars like Jerry "Briscoe" Orbach and Angie
"Carmichael" Harmon. But it doesn't feel like "Law &
Order." It's melodramatic and manipulative, splattered with
awkward attempts at comedy and lacking in the original's
cool dignity. The cases (daddy-daughter incest, Bosnian war
crime rapes, the serial killing of prostitutes) aren't
necessarily seamier than the ones that turn up on "Law &
Order," but the treatment of them is flashier, grabbier.

Worst of all, "L&O: SVU" violates the first law of "Law &
Order" -- it shifts the focus from the process of
police work to the personal lives of cops. I mean, it has
taken viewers years to glean background information
about the characters on "Law & Order"; they reveal tidbits
of opinions and problems on the fly, while they go about
their business. But, already, a scant month after its debut,
we know much, much more than we need to about the sex crime
detectives of "L&O: SVU."

Det. Olivia Benson (Mariska Hargitay) was conceived during a
rape (we learned that in episode one), which, I guess, is
supposed to explain why she seems to have trouble
maintaining a professional reserve -- one minute, she's
crying empathetic tears, the next, she's going off at
suspects like a loose cannon. Capt. Donald Cragen (Dann
Florek), a "Law & Order" castoff welcomed back into the fold
here, has had a drinking problem ever since his wife died in
a plane crash (tearful explanation, episode two). Det.
Elliot Stabler (Chris Meloni) has adolescent daughters at
home; being on this beat and seeing dead, raped girls turn
up every day gives him plenty to worry about. How can he
protect his girls' innocence if, indeed, they're still
innocent? "L&O:SVU" makes you yearn for the original, where
cops punch in, punch out and somehow manage to refrain from
weeping at their desks late into the night.

All of this jacked-up melodrama is surrounded by
"Homicide"-wannabe flourishes, like jarring shots of crime
scenes and autopsy tables and (not quite clever enough)
breezy cop sarcasm. The result is a show that's
simultaneously soggy and crisp -- not an appealing
combination however you slice it. "L&O: SVU" also has one of
TV's most bizarre -- and not in a good way -- ensemble casts
ever. Meloni, who had memorable guest roles on "NYPD Blue"
and "Homicide" and is also on HBO's prison drama "Oz," is an
undeniable star. He looks like a young Robert De Niro and he
has De Niro's whispery voice and his unsettling, unhinged
glimmer about the eyes -- which is why it's really,
really hard to accept Meloni's character as a nice,
normal, devoted, suburban family man. Still, Meloni is the
single reason to keep watching "L&O: SVU" -- if only for the
episode, maybe a season down the road, where Elliot Stabler
snaps and turns into Kevin Spacey in "American Beauty."

Adding to the overall sense of woozy displacement you get
watching "L&O: SVU" is the fact that Meloni is joined here
by his fellow cast-mate from "Oz," Dean Winters. What night
is it? What am I watching? A bad-ass thug on "Oz," Winters
is wasted as comic relief on "L&O"; he plays Det. Brian
Cassidy, who's new on the squad and a bit of a dunce. He has
a hard time keeping all the sex crime terminology straight.
He says "fromage" when he means "frottage." Stranger still
is Richard Belzer reprising his eccentric "Homicide"
character, Det. John Munch. What's a member of the Baltimore
murder po-lice doing on a sex crimes squad in New York City
(besides the obvious fact that his old show was canceled)?
In the "L&O: SVU" pilot, Munch explained that he fled
Baltimore after his bride, Billie Lou, ran off with his
fellow detective, Stu Gharty. Munch has vowed never to set
foot in Charm City again.

On "Homicide," it never seemed to make much sense, Munch
being a cop; he was an ex-hippie, an old anti-war protestor
who enjoyed his weed. But, for a long time, Munch was an
integral element of "Homicide," providing a dash of
old-fashioned liberal conscience and a pinch of Jewish soul.
Toward the end of the show's run, though, Munch was spouting
monologues, not dialogue; Belzer simply stood around doing
his government-conspiracy-rant stand-up act, whether anybody
was listening or not. And this is the past-sell-date Munch
we get on "L&O:SVU." Belzer serves up the hipster ravings,
but nobody here is volleying; they just look at him like
he's nuts.

Belzer has already played Munch on an episode of "The
X-Files" and on two "Law & Order"/"Homicide" crossovers;
he's also reportedly going to guest star as Munch on
"Homicide" producer Tom Fontana's upcoming UPN cop series,
"The Beat," and in a "Homicide" TV movie planned for next
spring (guess Munch will have to recant his vow never to
return to Baltimore). As a "Homicide" fan, I'm finding it
just a wee bit painful to watch Belzer become the equivalent
of Fat Elvis, hauling out the white jumpsuit that is John
Munch again and again and again. Let it go, Belzer, for the
love of God! Munch serves no discernible purpose, cop-wise,
on "L&O:SVU" -- so far, his duties seem limited to fetching
donuts and baby sitting Det. Cassidy. Munch has become a
cartoon character in search of a frame. Tucked away at his
desk in the corner, babbling about JFK and the grassy knoll,
he's devoid of context, time, place, meaning. He's like one
of those living, disembodied celebrity heads in a jar on
"Futurama."
Uh-oh, I see another guest spot coming ...