In Sweden, this little film about lesbian teenagers was as big as "Titanic." 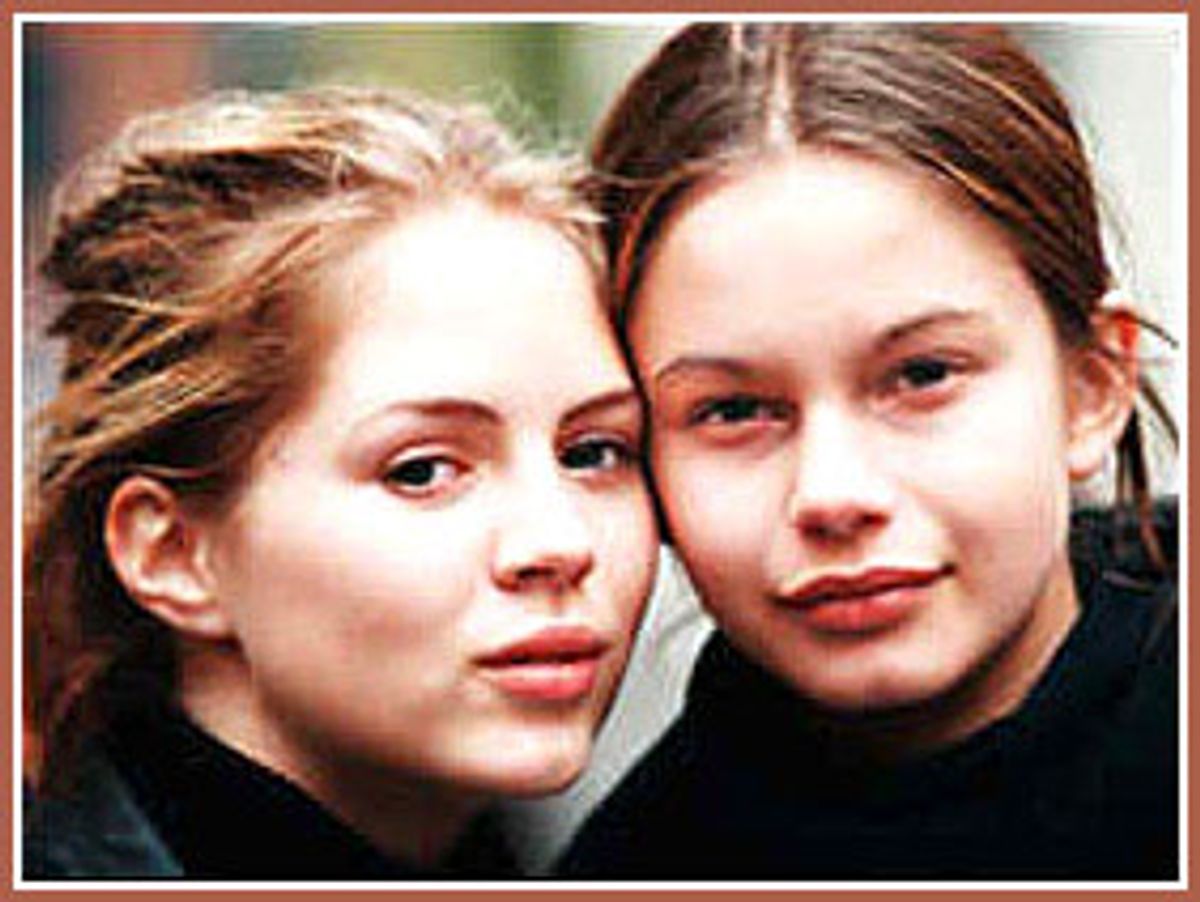 I love seeing lesbian couples walking down the street. Gay couples too. I'm happy for anybody who can walk around holding their honey's hand. When I see gay couples holding hands it's a reminder of how not too long ago it wasn't cool for gay people to show affection in public (still isn't in lots of places), and a reminder that when you're trying just to be thought of as a human being, the smallest victories feel like huge ones.

Maybe that has something to do with why gay teenagers are especially touching. There's nothing tougher when you're a teenager than admitting what guy or girl you've got the hots for. Think of how much tougher that is for gay kids. One of the nicest things about the teen comedies that have turned out to be such sweet-tempered surprises this year, pictures like "American Pie" and "10 Things I Hate About You," has been watching the characters hold their heads up as they pursue the objects of their affection across the lines of the cliques and the false divisions that high school imposes. But none of those comedies has featured a gay character. Gay teens have been pretty much consigned to indie films and foreign films, and many of those, like the new Swedish picture, "Show Me Love," just don't have the exuberance of the mainstream teen movies.

"Show Me Love," which was reportedly almost as big a hit as "Titanic" in Sweden, isn't a good movie. It's drab, visually ugly and a little pokey. You keep waiting for the kids to bust through the overlay of suburban boredom instead of being weighed down by it. (The much better original Swedish title, "Fucking Emel," refers to the characters' town and tells you exactly how they feel about it.) But the two heroines are so recognizable as real girls, and the young actresses who play them are so appealing, that you keep rooting for these kids.

Sixteen-year-old Agnes (Rebecca Liljeberg) is one of those quiet kids, a reader whose label as a strange plain jane keeps everyone, including her, from seeing that she's beautiful. Her straight hair parted in the middle and her high forehead might be camouflage for all the longing that radiates from her clear, steady gaze and for the sensuality of her bee-stung lips. She's the kind of kid who might still feel like an outsider even if she weren't in love with another girl in her school. After two years in Emel, Agnes hasn't made any friends, something her mother refuses to accept. She's determined to throw Agnes a sweet-16 party, though Agnes is certain no one will show up. About the only person who does is Elin (Alexandra Dahlstrvm), the classmate on whom Agnes has a crush.

Like Agnes, Elin is one of those kids whose reputation is based on the way she looks. Blond and voluptuous, she's assumed to have slept with lots of boys, though she's only kissed her fair share. (When one boy expresses interest in Elin to his buddy, the guy tells him she is used goods.) Elin has more energy than she knows what to do with, though it all seems to get snuffed out by the tedium of her town. When we see her in class with her head on her desk, she looks bored enough to cry.

Writer-director Lukas Moodysson is smart about the artificiality of high school alliances. Elin hangs out with her crowd because, like her, they're the attractive, cool kids she's expected to hang with. (Just as Agnes pretends to be friends with the wheelchair-bound girl who, like her, has no other friends.) But one look at Elin with them tells you they bore her as much as anything else. When Elin and Agnes start to talk the night of Agnes' disastrous birthday party, they make a connection. In some way, Agnes stabilizes Elin, and Elin imparts some of her what-the-fuck spirit to Agnes. And when they finally kiss, everything that has seemed tentative about the movie falls away. There's hunger in the kiss that goes beyond teenage lust. And Moodysson accords it a grandeur by setting it to Foreigner's magnificent "I Want to Know What Love Is." It's a great moment because Moodysson takes it as seriously as the girls do; the kiss has all the earth-shaking promise of those great teenage kisses, the promise that from here on out, nothing will ever seem dull or mundane again.

Unfortunately, the moment is so potent it just about sinks the rest of the movie. What follows has to do with Agnes and Elin dealing with that kiss, and the tentative overtures and sudden, hurtful rebuffs that follow. Nothing in this section of "Show Me Love" feels inauthentic. For Agnes and Elin to admit that they're in love means coming out to their friends and family (there's no way to hide being in love when you're a teenager). Gay teenagers watching this movie might feel everything that keeps them from declaring who they are is right up there on the screen. The trouble is that these scenes deprive the movie of its greatest asset: the natural chemistry between Agnes and Elin. I longed to see more of them together, more of the amazement they showed in that previous scene as they realized all the ways in which they connected.

It might not be so big a problem if there were something more to occupy our attention while waiting for Agnes and Elin to get together. But Moodysson never makes full use of his talented supporting cast, including Erica Carlson as Elin's older sister and Mathias Rust as Johan, the boy with whom she has a brief dalliance. Some of what the director does is fine. I particularly liked the way he treats Elin's sleeping with Johan as no great thrill and no great tragedy, refusing to accord it any more importance than she does. And I liked the way Ralph Carlsson, as Agnes' dad, works awkwardly but genuinely to keep the lines of communication with his daughter open. On the other hand, it doesn't make us care any more for Agnes that she's so unresponsive. And Moodysson doesn't show all the sympathy he might toward Rust's Johan, who's trying to open himself up to Elin but is carrying around too much protective-adolescent-guy baggage.

The director makes a horrible mistake with the character of Agnes' wheelchair-bound friend. Miserable for herself at her birthday party, Agnes berates the girl mercilessly, telling her she never wanted to be friends with her in the first place. We see just how much this hurts the girl. But Moodysson seems to be inflicting his own cruelties on her when her character turns out to be sour and petty, spreading rumors about Agnes' lesbianism.

What keeps us watching are Liljeberg and Dahlstrvm, both beautifully natural, and the hope that we'll get to see them together. The payoff, which combines adolescent bravado and tentativeness, is -- in tone if not in staging -- just about perfect. There's humor and sweetness in the way the movie leaves the girls teetering between the shelter of girlhood and the bigger, scarier, more thrilling world of sex. That they don't seem willing to give up either only makes them even more appealing. Like all adolescents, they want it all, a chocolate milk and a nice afternoon fuck.