For the bad times

Sometimes a friend in crisis is better than a friend for life. 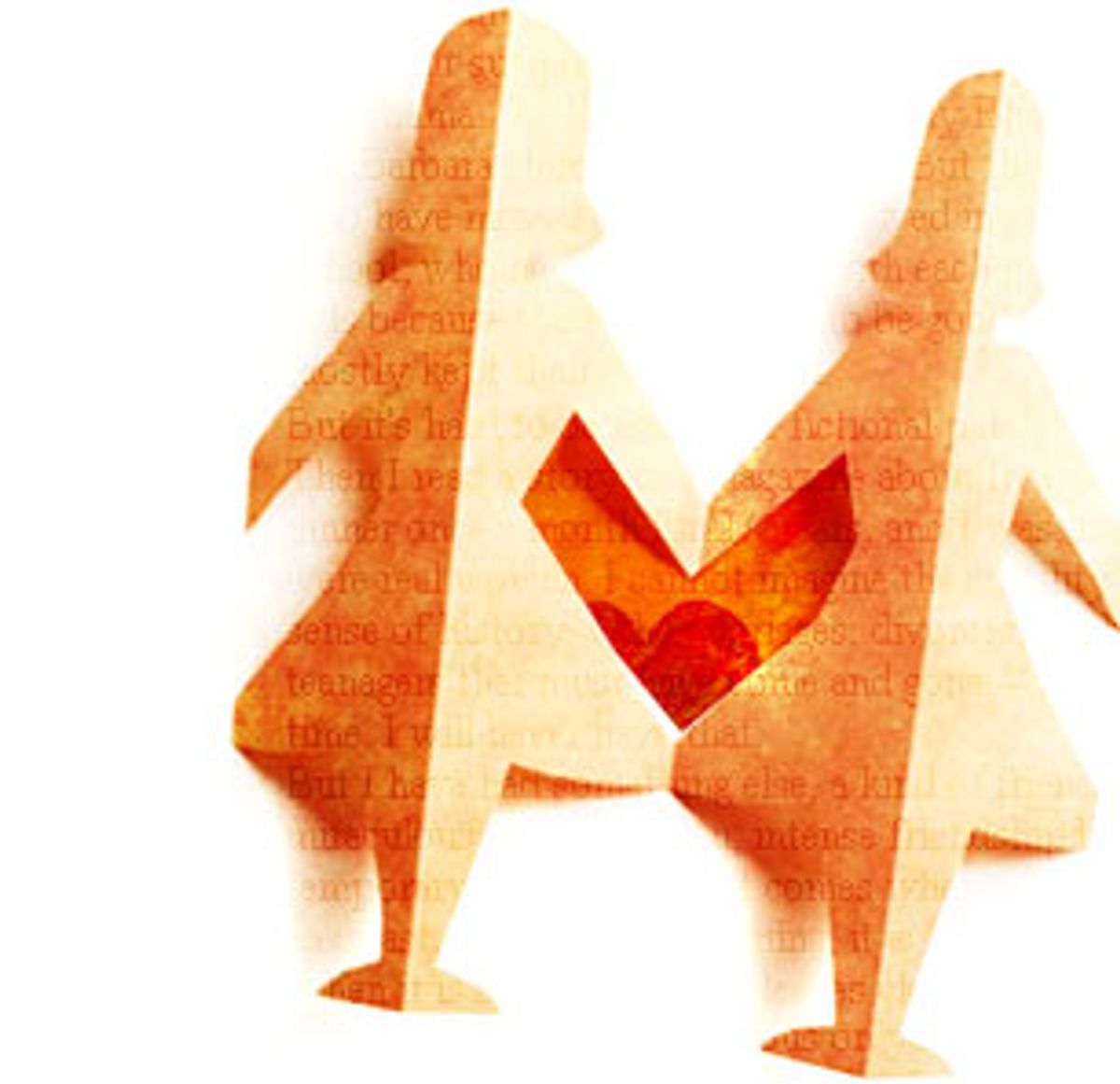 I know of such friendships. We all do. They are the stuff of fiction and melodrama: the YaYa sisterhood, Judy Blume's "summer sisters," Bette Midler and Barbara Hershey on the beach. But these are not real women, women, like me, who have moved eight times and lived in six different states since graduating high school; who have shed people with each move; who have had to trade friends for kids because there wasn't time to be good and true to both. Women who have mostly kept their own counsel.

But it's hard to be jealous of fictional pals.

Then I read a story in a magazine about five women who have been meeting for dinner once a month for 27 years, and I was, for a moment, truly envious. These were real women. I cannot imagine the stability of a group friendship like that, the sense of history -- the marriages, divorces, births and deaths, toddlers and teenagers that must have come and gone -- the ease, the comfort, the fullness of time. I will never have that.

But I have had something else, a kind of friendship that may be even more miraculous. It is a sudden, intense friendship born of adversity, a fierce, temporary connection that comes when you need it and fades when the moment has passed. When it is happening, it is the most important relationship in your life. When it is over, the hole it leaves closes quickly.

"There's something suspicious on your mammogram," the nurse had said. I knew there were many things it could be, but I also knew there was only one thing it was. The biopsy, a day later, confirmed it. Nancy was the only person I could think of to call when I got the news. She was the only woman I knew who had had breast cancer. She was not a close friend, but she was more than a nodding acquaintance.

"Shit," she said over the phone when I told her, a reaction I came to appreciate later after two friends fell apart on me when I told them the news. What you don't want when you tell people you're facing something terrible is pity. You've got enough of that going on inside. What you do want is anger. There's energy in anger.

Nancy came over that afternoon and sat with me at the kitchen table for hours. I don't know what she did with her two children. I don't know how, for the next two weeks, she rearranged her life so that she became a fixture in mine. I never asked, and she never burdened me with the details. During those weeks other friends called; other friends cared. But they didn't know what to do. "Call me if you need anything," they would say, meaning it. But of course I didn't. I couldn't articulate what I needed. I didn't know what I needed. Nancy knew.

She is a large, solid woman who listens carefully and measures her words. She is not a hugger, but when she hugs, you stay hugged. That first afternoon she sat and listened as I railed on about death and dying and how I couldn't believe this was happening to me and how I would never live to see my kids get out of middle school. Every once in a while she would pour more tea. When she got up to leave, she took hold of both my hands and looked me in the eye. "I'm still here," she said. "You will be too."

The next morning she dropped by to give me her cell phone so I wouldn't be house-bound waiting for calls from doctors and labs. Later that day, she drove me to my first appointment and sat with me as the surgeon outlined the reasons he couldn't do a lumpectomy and would have to remove my breast. When he left the room, and I allowed myself to cry, she sat next to me on the examining table, her shoulder touching mine. "Do you want to see what a mastectomy looks like?" she asked. I nodded, and she lifted up her shirt and unhooked her bra and showed me.

I found myself calling her several times a day. Sometimes I had news. "I have estrogen receptors!" I yelled once from a pay phone. That was good news because it made the cancer more treatable. But sometimes I had no news, nothing to say. I just wanted to hear her calm, soft voice.

She came with me to all my appointments that first week, tape recording the sessions in case I missed something, handing me paper cups of tea, keeping me fortified with cartons of yogurt. She insisted I go for a second opinion and arranged everything for me, making appointments with the doctors in Seattle who had treated her four years before. She took two days out of her life to come with me, to drive the five hours up and back the freeway and stay in a motel, to sit with me in waiting rooms and exam rooms and consulting rooms, and when it was all over, to celebrate my "excellent prognosis" with something big and gooey from the bakery.

Then, as quickly as she had come into my life, she left it. She was in charge of a two-week camping trip for her daughter's school. She had to go. By the time she came back, I had weathered a few storms on my own. My surgery was over, and so was the initial shock. I was less needy. I was more myself. She sensed that immediately and slipped back into her life, her children, her husband, her work, her own set of friends.

I saw Nancy a few times after that, and for a while we spoke weekly on the phone. "Just checking in," she would say. Then the phone calls, both hers and mine, grew less frequent and finally all but stopped, and she went back to being what she was before, a person I occasionally saw around town.

The thing about temporary friendships is that you don't have the chance to repay the debt. I think of those five women who have met for dinner for the past 27 years and all the opportunities they have had to pay back each other's kindnesses, to trade places, weak and strong, needy and needed, over the years. Nancy and I don't have that history nor are we likely to have that future.

Once, in the thick of our friendship, I despaired aloud over never being able to adequately thank her. That's when she told me about Janet, who came from nowhere to pull her through the three worst weeks of her life. "The way it works is this: You are how I'm repaying Janet," she said.

So it is that temporary friendships outlast us, repeating themselves serially, rhythmically, as each of us steps up when we are needed. We temporary friends are shamelessly intimate. Our connection is white hot, too hot to last. But it is also too essential not to pass on. I know how I will thank Nancy.

Lauren Kessler is director of the graduate program in literary nonfiction at the University of Oregon.