Our travel expert directs readers to accommodation and fun in the rainy city, plus advice on trips to Manhattan and Apostle Island. 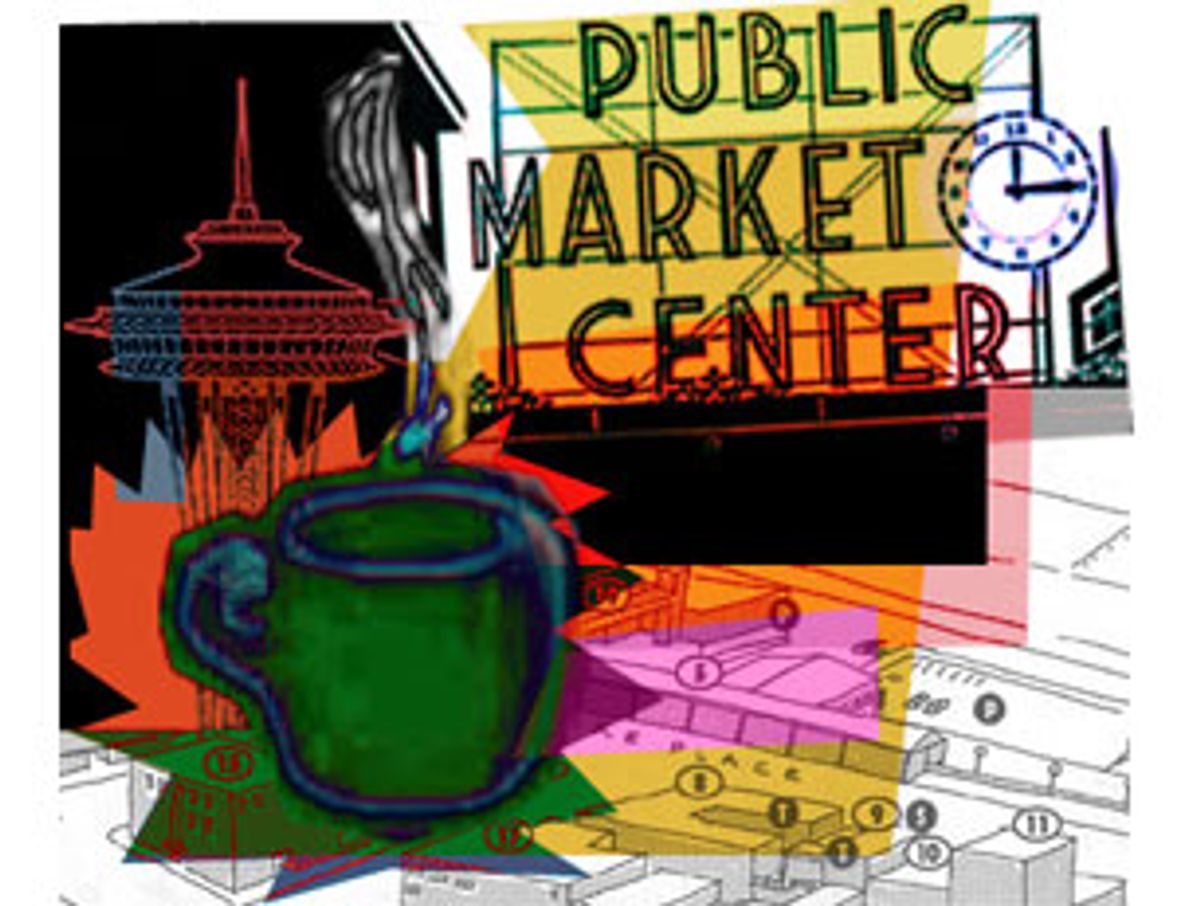 For a first-time trip to Seattle, where can we get information on an
interesting place to stay, as well as dining advice?

Seattle has many hotels with soothing views of Puget Sound and the
surrounding mountain ranges, and on clear days you might even see Mount
Rainier if you have a high, southeasterly exposure. You're also within
walking distance of Pike Place Market, the waterfront and other downtown
attractions.

Among places to consider are:

Many other hotels, grouped by location, can be found through the Seattle-King County Convention & Visitors Bureau, phone (206) 461-5800. You also can find out about discount programs through the Web site.

A clearinghouse for hotels, inns, bed and breakfasts and other
accommodation is Pacific Reservation Service, phone (800) 684-2932.

For quick-hit dining advice try the Zagat Survey guide to Seattle and the Seattle
Weekly's readers' "best of
Seattle" picks for 1999.

I'm looking for a reasonable place to stay in New York in November.
Any suggestions?

New York has plenty of hotel rooms, but at this time of year,
conventions and the approaching holidays can make it seem like every one
of them is booked, at least for business-class rooms, which are in greatest
demand. If you wait until the last minute to book, you'll end up paying a
premium and may not get your first choice of location. In fact, during
November and December, there is not much discounting available even if you
book well in advance.

The New York Convention & Visitors Bureau site has a
search engine for selecting hotels by price range and location. You can
also check with brokers such as Quikbook and
Central Reservation Service.

The CVB also promotes a Peak Season Hotel Hotline at (800) 846-7666
designed to help people find lodging during the fall and holiday seasons.
When using that line, though, callers should know that it's operated by Hotel
Reservations Network, the biggest online hotel broker, which promotes
itself as offering rooms at a discount. A story in the August 1999 Consumer Reports Travel Letter reported on a test of several brokers,
including HRN, and found that HRN sometimes charged more, not less, than
if you called the hotels directly.

However, brokers such as HRN sometimes have blocks of rooms available even
after a hotel reports being fully booked, so they can be worth checking
even if the price is not discounted. They also can save you the effort of
calling many hotels looking for a room. (Always ask whether a broker
charges a booking fee or cancellation fees.)

Another holiday twist is that many of the better New York hotels have
minimum booking requirements -- at least two days, sometimes more. I
monitored this last year and discovered that single-night bookings do
become available at the last minute if they haven't managed to fill all
their rooms.

Friends have invited me to the Apostle Islands of Wisconsin. What can
you tell me about that area?

The Apostles are a cluster of islands in Lake Superior at the tip of the
Bayfield Peninsula in northernmost Wisconsin. They supposedly got their
name from an early French missionary who'd spotted a dozen of them, but
actually there are about 21 islands in the group. They are undeveloped and are frequented by boaters and nature lovers. Among the group are half a dozen lighthouses and about a dozen docks.

The biggest of the islands, and the one that gets the most tourists,
is Madeline Island. It has fewer than 150 year-round residents at La
Pointe and is about 20 minutes by ferry from Bayfield, on the mainland. It
has its own airport. Madeline Island offers golfing, camping, hiking,
bicycling and a number of historic attractions, including an Indian
burial ground and the
Madeline Island Museum, commemorating its fur-trading past. The area is designated the Apostle
Islands National Lakeshore. Free national park primitive campsites are
provided on 18 of the islands; Madeline Island offers some rentable
campsites with hookups, too.

From June through October there are narrated boat excursions
of the Apostles that leave from Bayfield.

The lakeshore is open all year. The headquarters visitor center is open
daily from May through October from 8 a.m. to 5 p.m. (8 a.m. to 6 p.m.
Memorial Day to Labor Day) and Monday to Friday November through April
from 8 a.m. to 4:30 p.m.; closed Thanksgiving, Christmas and New Year's
Day.

An earlier column addressed the question of whether London tourists could
routinely go up into the Tower of Big Ben (the answer is no). But reader Mike Morley in
Toronto once made it into the tower courtesy of a relative who worked
for a member of Parliament. Here's his account:

There is no "lift" in the tower, so we ascend a narrow, winding
staircase stopping every 20 steps or so for breath and snippets of history
from our guide, an entertaining old Cockney fellow who has conducted tours
there for years. The inside of the tower is stone, as you might expect,
and lighting is provided by small windows cut into the brick and by
electric lights.

Toward the start of the climb, you pass through a small cell in which
prisoners have been kept from time to time right up into this century.
Leaning over to gaze down the center of the tower as you ascend farther,
you see only the spiral of iron railings about the stairs you've just
climbed, and a rope (used
for raising and lowering lunch, according to our guide) disappearing into
the darkness.

The clock faces are reached first, about twice the height of a man and
made of numerous translucent panes of German glass in an iron framework
in a chamber below the clockworks and bells. Behind each face, on the
opposite side of the aisle, is a large iron frame and reflectors for the
electric bulbs used to illuminate the clock face at night -- four in all.
The arms of each clock face are driven by long shafts protruding from
the center of the tower and connected to machinery descended from the next
level up. The bells (there are five if I recall correctly, including Big
Ben) are in a room behind the clockworks, and are accessible by a catwalk.
This is where we stood to hear the chimes.

Tours comprise about eight to 10 people at most. We were sternly warned
to keep silent for two full minutes at the hour, owing to the BBC
microphones positioned about the room, and we were informed, as we stood
about the clockworks, of how they had shattered and sprayed the room with
shrapnel in the 1970s when a 5-ton counterweight fell unrestrained to the
bottom of its shaft and spun the works out of control. It was amusing to
see old English coins (threepence and such) being used to "trim" the
pendulum so as to keep the clockworks accurate. According to lore, an
extra set of old coins is kept on hand as spares. The view of London and
the river from the tower is terrific; shooting photos inside the tower is
forbidden.

All in all, this was an enjoyable experience. Nevertheless, for those who are
interested in time and famous timepieces, there is an even more engaging
date to be had (so to speak) at the Greenwich Observatory in east
London. (Though I suppose many would disagree merely because the Tower
is off-limits, and therefore forbidden fruit.)

At Greenwich, one can view the very clocks engineered and constructed in
the 18th century by John Harrison, who solved one of the most vexing and
costly scientific problems of past ages: how to keep accurate time at
sea to enable the calculation of longitude. (Harrison's life is chronicled
in the engaging and easy-reading "Longitude" by Dava Sobel.)

The observatory is situated on top of the Prime Meridian; one can step
from the east to the west side of the earth in a trice. The Docklands Light
Railway and a quick trip through the Greenwich Foot Tunnel, London's
oldest foot tunnel under the Thames (an experience in itself), make this
a simple outing from anywhere in the city. Greenwich offers as well a
lovely park, the Maritime Museum and the Cutty Sark (in dry dock) close
by. Engineering and science buffs like me also enjoy the fact that the
trip back out of Greenwich on the Docklands line takes you down one of
the deepest tunnels of the London Underground.

Sir Isaac Newton labored at the observatory, as did astronomers
Flamsteed, Maskelyne and a host of others, and of course the observatory
itself was originally designed by Christopher Wren. Having been to
both, if I had to take my choice again, I'd take Greenwich over Big Ben
-- not least for the odd little wooden chair/bench, still intact and
unassuming as ever, upon which Newton himself reclined to observe the
heavens.