"Pre-Code Hollywood" by Thomas Doherty and "Sin in Soft Focus" by Mark A. Vieira

A fascinating and important study details the "moral anarchy" of the early, pre-censorship talkies; a volume of classic photographs covers the same era. 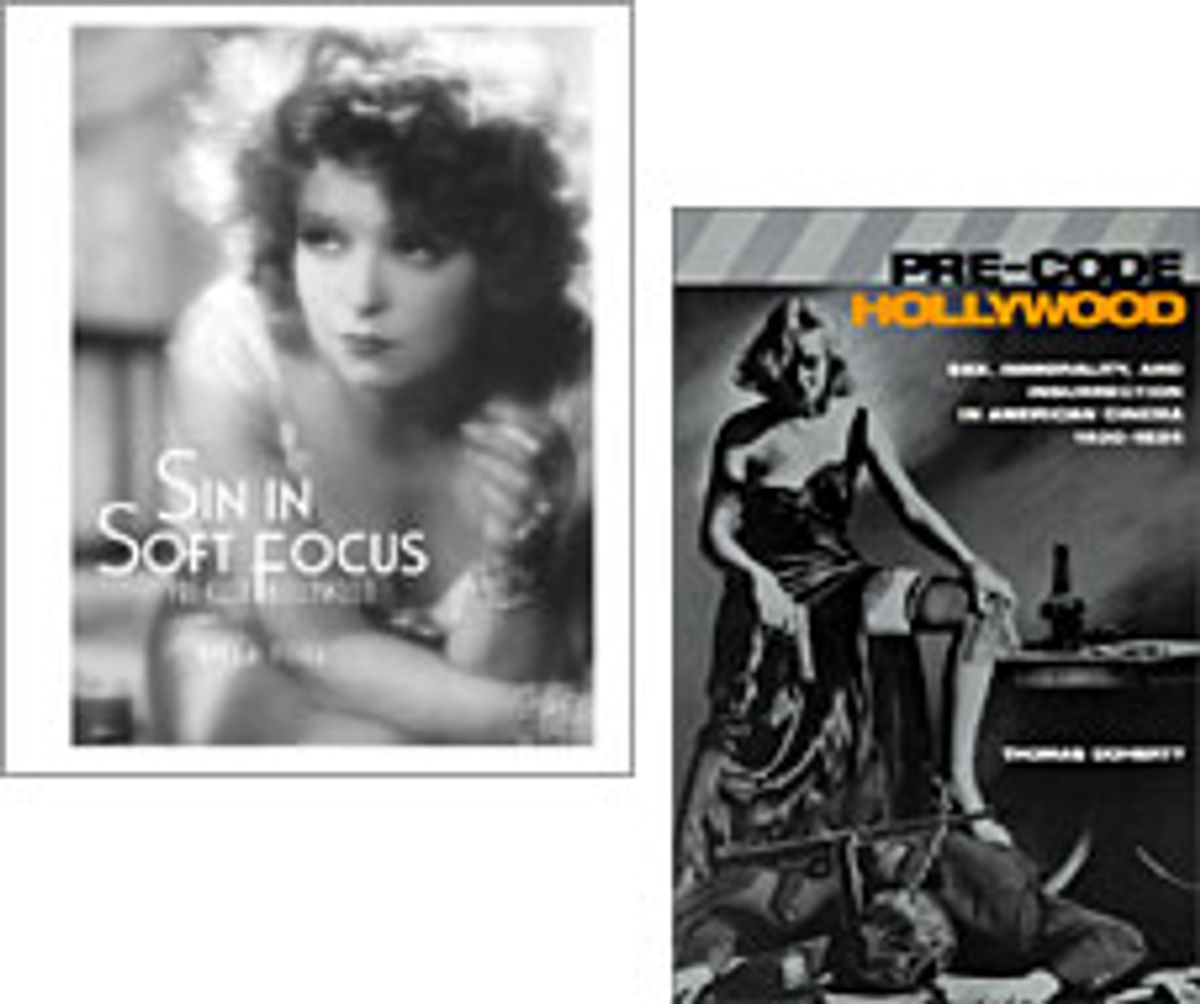 "Yes, I wrote the story of 'I'm No Angel' myself. It's all about a girl who lost her reputation and never missed it." So said Mae West in 1933, the last year before the American motion-picture industry voluntarily surrendered to three decades of censorship by the Hays Office, properly known as the Production Code Administration. Nominally, the Production Code had been in effect since 1930, when mounting protests against sin and scandal in Hollywood (both on-screen and off) prompted nervous studio heads, producers and distributors to adopt it as a safety measure against government regulation. Then as now, however, Hollywood paid nothing but pious lip service to the concept of self-restraint. Until July 1934, when the Code finally gained teeth under the direction of Roman Catholic newspaperman Joseph I. Breen, the studios not only ignored but flouted its directives in a series of wild, racy, sexy and subversive films that, up till now, have been largely forgotten by both audiences and film scholars.

On the heels of a major retrospective at Film Forum in New York, two new books now chart the course of this freewheeling era in Hollywood history when vice went unpunished on the screen and gangsters, call girls, adulterers, con men, romantic revolutionaries and "moral reprobates" were, by all standards of measurement, the favored heroes of American cinematic culture. It was a period when movies were "a realm of moral anarchy," as Thomas Doherty writes in his important and entertaining documentary study, "Pre-Code Hollywood."

The four years between the surface adoption of the Code and the final triumph of the Hays Office corresponded with the worst of the Great Depression and, simultaneously, the advent of talking pictures -- two events that left the studios scrambling for new ideas and desperate to retain their hold on a rapidly dwindling audience. As it happened, that audience was in a foul mood, seeking not just "escape" from the grim economic reality of the time but something to whet its increasingly cynical, anti-authoritarian appetite. Not since the Civil War had the American public been so ripe for rebellion. Hollywood's four-year excursion into sin and temptation ended only with the presidency of Franklin Roosevelt and the consolidation of national recovery efforts at the federal level, when the threat of government intervention became real and the studios bowed to the inevitable.

Doherty, director of the film studies program at Brandeis University, came to his topic after seeing a restored and uncut print of "Tarzan and His Mate" (1934), which included "an eye-opening underwater swim scene featuring Johnny Weissmuller, barely clad in a loin cloth, and a body double for Maureen O'Sullivan  clad not at all."

To anyone raised on the syrupy, tightly muzzled romances of a later era, the open sensuality of the pre-Code years is bound to come as a shock. West, "Paramount's gift to a jaded world," promoted sex by both mocking and flaunting it. Jean Harlow happily traded her virtue for money and chauffeurs. Men exposed their sweaty chests long before Clark Gable doffed his shirt in "It Happened One Night," while the cultured androgyny of Dietrich and Garbo suggested "erotic alternatives" to a public hungry for defiance as well as sensation. On top of all that was the huge proliferation of gangster films, horror films, "wisecrack" comedies, "racial adventures" and "preachment yarns" of social reform: "The promiscuous embrace of sex was only the most commercial and carnal element of a broader assault on traditional values," Doherty writes. "The complete spectrum of vice, not sex alone, infested the films in question, an epicurean indulgence in activities illegal, forbidden and stimulating."

"Pre-Code Hollywood" is not just a valuable exercise in film scholarship but also a fascinating cultural history of America in crisis. Doherty's discussion of Roosevelt's notorious manipulation of the mass media is itself worth the price of the book. (Among other things, the author explodes the currently fashionable myth that American voters were unaware of Roosevelt's confinement to a wheelchair, and for this alone he should win an award.)

With few exceptions, as Doherty admits, the films of the pre-Code era can't stand up next to the brilliant, lavishly produced fantasies of Hollywood's ensuing Golden Age, which began with the full adoption of the Code in 1934 and ended with the advent of the ratings system in 1968. That Hollywood produced its finest work under direct censorship is a stubborn paradox for the culture wars. "The sad lesson of film archaeology," Doherty writes, "is that quite a few forgotten movies have earned their consignment to oblivion."

Memorable indeed, by contrast, are the still photographs reproduced in Mark A. Vieira's "Sin in Soft Focus," which covers the same period in Hollywood history in a handsome coffee-table format. Vieira's text is by necessity briefer than Doherty's but no less lively and provocative. At a time when Hollywood is again under pressure to stanch the flow of violence, smut and mindless titillation in its product, press reaction to the rediscovery of pre-Code films has so far taken a "plus ga change" approach. One glance at the gorgeous stills in Vieira's book will convince you that plus ga change, plus c'est a whole lot less.
One striking photograph shows Marlene Dietrich dancing a voodoo number with a crew of Hollywood Hottentots in "Blonde Venus." With images like that as competition, who, in 60 years, will remember Cameron Diaz with a glob of semen in her hair?