As J.H. Hatfield's credibility crumbles, St. Martin's Press stops distribution of his new book, which says the GOP front-runner was arrested on drug charges in 1972. 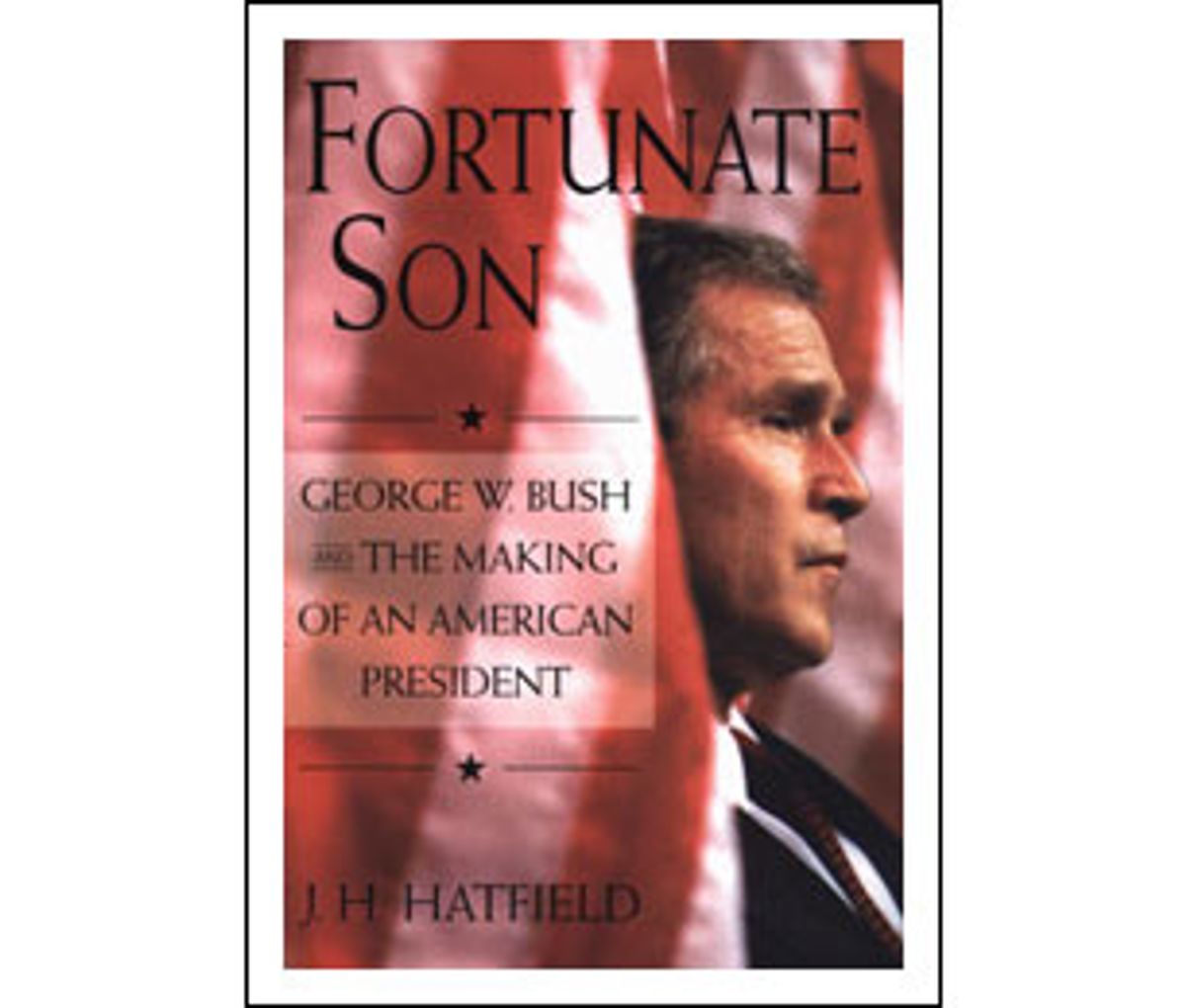 The publisher of a controversial new biography about George W. Bush has halted publication of the book after published reports opened up serious questions about the veracity of the book's claims, the publisher's fact-checking process and the credibility of the author, J.H. Hatfield.

In a statement Thursday, St. Martin's Press said, "Last night, St. Martin's Press received information from a reporter at the Dallas Morning News about James Hatfield, the author of 'Fortunate Son: George W. Bush and the Making of an American President,' which, if true,
calls into serious question our continued ability to trust the information
provided to us by Mr. Hatfield. As a result, at 9 a.m. this morning, we suspended publication of Mr. Hatfield's book."

In the book, Hatfield alleges that Bush was arrested for cocaine possession in 1972, but had his record expunged by a Republican judge in exchange for Bush's participation in a community service program at Project P.U.L.L. in Houston's inner city. The author cites three anonymous sources to support his claim.

The Bush campaign called the book "science fiction," and a report in the Dallas Morning News said that Hatfield is a convicted felon. According to the Dallas newspaper, Hatfield, 41, was convicted in Dallas of hiring a hit man to murder his employer with a car bomb in 1987, and served five years of a 15-year sentence in a Texas prison.

Hatfield, who previously penned books about "The X-Files," "Star Wars" and "Star Trek," told the Dallas Morning News that he was not the convicted felon, James Howard Hatfield. By way of explanation, he offered the following Mulder and Scully-ism: "Doesn't it sound a little bit weird to you that all of a sudden, the guy that's accusing potentially the next president of the United States of having his record expunged, all of a sudden miraculously has a record himself in the state of Texas? This is all just a little bit too bizarre."

In addition, Salon News has learned that Hatfield has checked out of his New York hotel, where he was staying during a book tour, and disappeared. St. Martin's Press officials have not been able to locate him.

Thomas Dunne, publisher of the St. Martin's Press imprint that released "Fortunate Son," said in a statement: "We were totally surprised and distressed by this development. Mr. Hatfield
was the author of several successful prior books. We acquired this book
through a highly reputable literary agency."

A Salon News investigation of Hatfield's background also raised questions about the author's risumi. In the publicity materials released by St. Martin's, Hatfield is described as a Texas "syndicated columnist, freelance journalist, a frequent contributor to several Lone Star State newspapers and magazines, including the Dallas Times-Herald, Houston Post, Dallas Observer, and The Texas Women's News." Three of those papers are now defunct. Thomas Dunne publicist Jamie Brickhouse said Hatfield had done most of his freelance writing in the late 1980s and early '90s, but could not specify exact dates.

But Bob Walton, who was editor in chief of the Dallas Observer from 1980 to
1991, told Salon News he didn't recall ever working with Hatfield. "The
name doesn't ring a bell," he said. "If somebody wrote for us a few times,
I wouldn't be surprised if I didn't remember the name. But he wasn't a
'regular contributor' -- otherwise I would click on the name." Current
Dallas Observer editor Julie Lyons, who took the helm after the publication
was sold to the New Times weekly newspaper chain in 1991, said neither she
nor her staff had ever heard of Hatfield, nor did the Observer's accounting
office have any record of paying him. "My most charitable assumption," she
said, "is that he wrote for us before 1991. I've never heard of him, nor
has anyone else in this office."

Former Dallas Times-Herald editor Roy Bode also had no memories of working
with Hatfield. "I don't recall that byline," Bode said in a telephone
interview, adding that the Dallas daily had an extensive bureau system and
used freelancers very rarely.

"I do not recall the name James Hatfield," said Lynn Ashby, former editor
of the Houston Post. "We dealt with a whole lot of people over the years
and I can't remember them all." But he added that he had done a
comprehensive search of Post articles from 1985 through 1995, the year the
paper folded, and had not turned up Hatfield's name.

Casting further doubts on the author's past, St. Martin's was unable to
present evidence that Hatfield was, in fact, the recipient of what his
biographical materials describe as the "prestigious international Isaac
Asimov Foundation Literary Award for Outstanding Biography." Tracy
Bernstein, the editorial director at Kensington Books who edited several of
Hatfield's previous books -- including his "award-winning" biography of "Star
Trek" star Patrick Stewart -- said she was unaware that Hatfield had won
such an award. Nor had she heard of the award itself. Salon News has been unable to find any record of an Isaac Asimov Foundation or a literary award of that name.

Jesse Olsen, an assistant at the Ralph Vicinanza literary agency in New
York, which handles literary rights for Asimov's estate, also said
his agency had never heard of the award.

But Bernstein defended Hatfield's past work for his "professionalism."

"I found Jim Hatfield to be a tireless worker who I could count on to
always deliver, and in every way an easy author to work with," she told
Salon News in an e-mail interview. "Most of the books we worked on concerned pop-culture trivia, but even those books had a certain amount of 'backstage'
info about the stars, creators or what have you. So those books, as well
as the Patrick Stewart bio, were vetted by our lawyers and anything that
was questioned he had reputable sources for. I thus never had cause to
doubt his professionalism or honesty."

Bernstein said Kensington Books ended its relationship with Hatfield when it
turned away from the unauthorized celebrity biographies and unofficial
science-fiction television tie-in books the author favored.
"We declined to do those books anymore because people like George Lucas and
Paramount got very litigious. It's unfortunate. It didn't have anything to
do with his professionalism."

The controversy also puts St. Martin's' fact-checking and legal review
process under an intense spotlight. On Monday, Thomas Dunne told Salon News
that the book was carefully fact-checked and scrutinized by lawyers. But
Hatfield only provided his editor, Barry Neville, with the name of one
source regarding the explosive Bush drug allegation. And it was unclear
how thoroughly the publisher investigated Hatfield's credibility.

Thomas Dunne Books publicist James Brickhouse told Salon News on Tuesday
that Hatfield was unavailable for interviews because "his wife recently
had a child and there are complications." The author had been widely
available to the media on Monday, but stopped returning calls as criticism
of his biography mounted. "We're investigating our author's credibility and
the allegations against him," added Brickhouse.

The "Fortunate Son" incident isn't Thomas Dunne's first brush with literary
scandal. The St. Martin's imprint was forced to withdraw a biography of
Third Reich propagandist Joseph Goebbels in 1996 after a storm erupted over
the book, which was written by controversial British historian David
Irving, who has been widely condemned as a Holocaust revisionist.

George W. Bush dismissed the book's charges as "ridiculous" on a campaign
stop in Arizona Monday and his father, former President George Bush, issued
a statement Tuesday calling the allegations a "vicious lie." "He has
insulted our son's character and my character, and I resent it. This kind
of nasty, groundless attack is the reason that many good people are
unwilling to enter politics. I am proud that George is willing and strong
enough to take the heat
even in the face of this kind of mindless garbage."