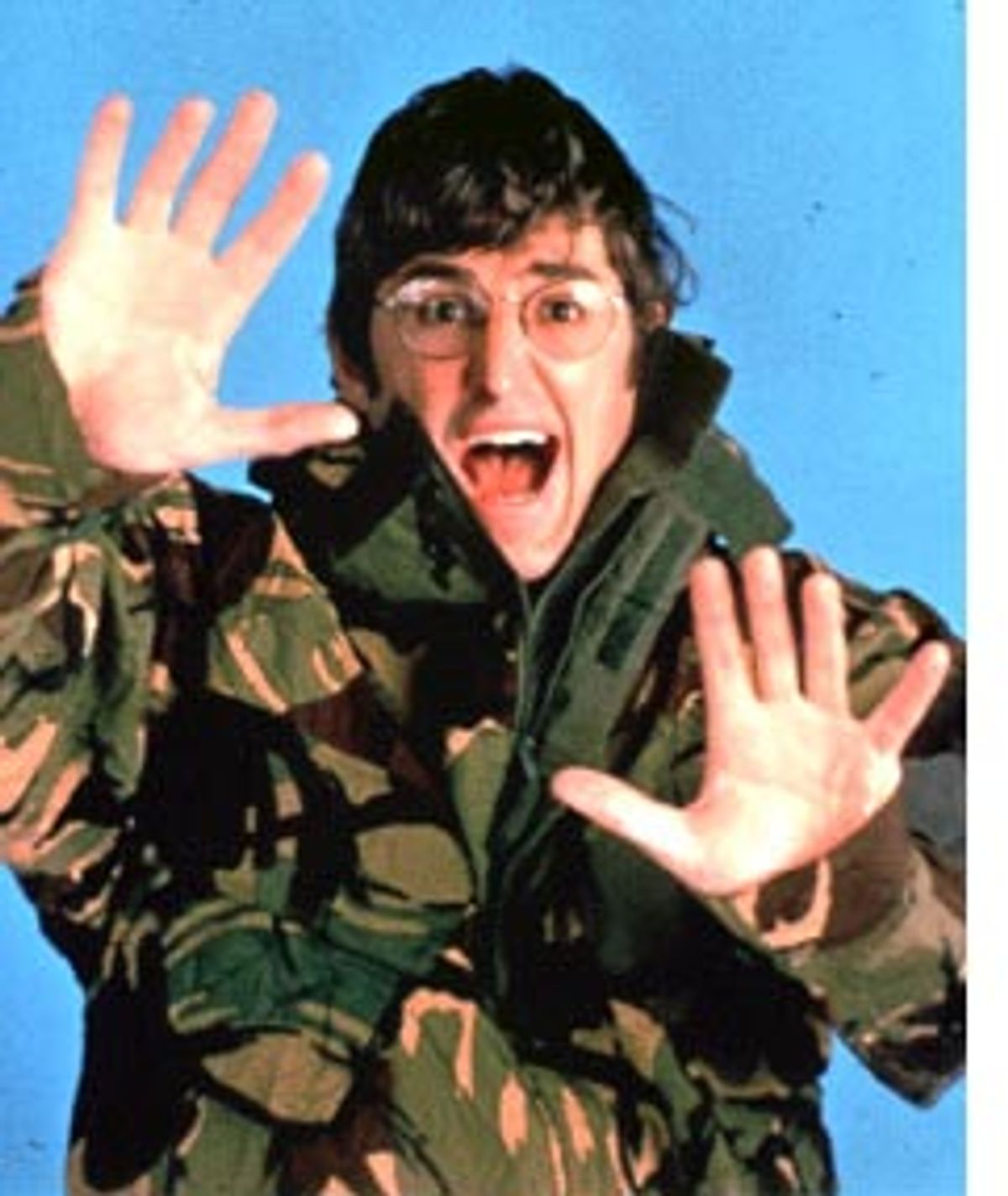 Theroux, 29, came to television by way of "TV Nation," the predecessor to Michael Moore's "The Awful Truth." (Fans of that show may recall how Theroux distinguished himself
with a brilliant segment in which he waged "psychological warfare" on the media circus surrounding the O.J. Simpson murder trial.)

But Theroux's distinct charm -- and, indeed, the success of his show -- depends largely on his lacking any clear agenda, political or otherwise. "Weird Weekends" is more
about Theroux's earnest explorations than it is any kind of satirical exposi -- though he's not above using provocation for the sake of good footage. (In one segment, a pissed-off pro wrestler worked him over until he threw up.) He walks the line between being brave (sleeping in an underground mountain shelter with an armed survivalist) and brazen (asking a wannabe porn actor to show him his penis), but he never forgets his well-bred manners -- in a show about born-again Christians, Theroux accompanies his "date" to a religious revival, and shows up in a suit and tie.

There's a touching moment at the end of the show about anti-government survivalists in Idaho where Louis bids farewell to his host and advises him "not to do anything
silly." "Seriously, Mike," he intones,
"I'd hate to hear that something terrible happened to you because of something silly." He reprises the sentiment in the closing voice-over, and just when you think he's taken it to the point of mockery, comic relief kicks in and the following readout appears on-screen: "Since the taping of this episode, Mike hasn't done anything silly." Ultimately, Theroux makes more fun of himself than anyone.

"One of the weird things about doing the series is that I'm making the program,
but the program's also about me, to a degree," Theroux explained during our interview. "So I'm both scientist and laboratory animal."

The Oxford-educated Theroux cut his teeth at the Spy school of satire, working briefly at the magazine as a writer and editor in 1992. "It was fun, but it was difficult, because it was definitely after the glory years.
I think we felt a bit like ancient Britons in the ruins of the Roman baths, you know, looking around at these monuments to a lost civilization and peeing in them, crapping in the Forum."

You worked with Michael Moore, who is a pretty controversial character, especially among
American lefties. So it's interesting that he seems to have found an audience in Britain. What's the appeal for British audiences?

For me what it comes down to is, Do you find his shows funny or not? Do you enjoy watching the shows or not? And if you think that there's something bogus about the political analysis, then that's because you're not enjoying the show. But I
personally do enjoy his shows. I like Tom Green. I can't justify it; I don't think [Green's] really doing a huge amount for the environment, but you're either laughing or you're not.

Michael's a polemicist, and a satirist, so he's going after corporate targets. It's not really what
I would do. But I applaud him for doing it. I don't consider the people I cover to be targets, just subjects.

So how do you pick your subjects?

There's a refreshingly unscripted feel to the shows. How much of it is mapped out ahead of time?

The first time I meet people, it's always taped. We have, obviously, a director and producer who have contacted people and pre-interviewed them to see what they're like. But I meet people for the first time on camera. I had a lot of war stories from working on "TV Nation," a lot of behind-the-scenes anecdotes, and I always felt like that was the sort of thing that should be going on air. So that's one of the primary impulses behind "Weird Weekends," that there be no "behind-the-scenes."

It seems your subjects tend to be working- or middle-class. Is that by coincidence, or are you
making some commentary about class in America?

I think the reality of it is, the show is about the relationships that form between me and people
who are alien to me and my way of thinking. And for that friendship to develop, I think we sort of rely on quite a lot of goodwill from the people
I talk to. And it may just be that upper-class people have better things to do than hang out with
TV crews and British people. I mean, most of the people we do stories on are pretty excited or flattered to have us there. And so a lot of the goodwill and bonhomie that comes out of the programs, I think, flows from that.

Would a show exploring English subcultures be as interesting?

It would be a lot harder to do. For one thing, I think maybe Americans like British people a
bit more than British people like Americans. It sounds harsh to say it, but there's a huge
Anglophilia over here, because America's got nothing to fear from Britain, really. America's
the most powerful nation on earth and so it has this luxury of being able to not feel threatened
by other countries. Whereas Britain, this former empire, is now reduced to inferior second-class
status in the world. So British people console themselves with the idea that maybe they're a
bit more cultured and sophisticated.

There's a long tradition of programs in Britain that cater to that sense of cultural superiority.
And I think some of the people in Britain who watch "Weird Weekends" get a sense of "Oh, those Americans, they're so vulgar and tacky and weird and stupid." I happen to think there's more to the shows than that.

You do walk a tightrope between taking a satirical approach with your subjects and seeming
genuinely engaged by them -- and occasionally it seems as if you're about to fall off.

This has been a weird journey for me, because I'm not someone blessed with a tremendous amount
of self-knowledge. And I think the first couple of stories I did, I was definitely being faux-naive. I was, what we call in England, taking the piss out of people. I did a story on some neo-Nazis in
Montana, and they were talking about the "race war" and different planets the different races were
going to go to. And I'd say, "Well, what's the black people's planet going to be like? What sort of facilities will it have?" And I just strung them along for a long time in this way, asking in ludicrous detail about their theology.

After that show, I tried to rein it in. But I'm actually aware now that, when I look at it, I'm
capable of being insincere without really realizing it. Which is troubling. Sometimes I think the other
people are being faux-naive also, and it's just part of the theme -- people know that I'm doing it, so it's OK. And other times I'm just being sincere. Sometimes the funniest stuff with people is stuff
where I just don't get it, and I'm just being normal. You know, if you look at the shows, I'm usually laughing quite a lot. It's really about me
being amused by people and them being aware of me being amused, and I suppose both of us being aware
of a culture clash. It's not supposed to be satirical. It really is supposed to be about my authentic reaction to people.

A lot of people say that.

It was pretty unsettling to watch.

At that moment I didn't feel like he was about to hit me, quite honestly. And maybe he was -- a lot of people have asked me about it -- and I just wasn't aware of it. But we actually had quite a good rapport going. If you analyze what is happening in the moment, I got slightly irritated with him because he was bragging about how much money he'd made. And I said, "Yeah, but you are
going down on guys, right?" He'd told me he was straight. You know, if you're gay, that's
absolutely fine, but if you're straight, that seems to me going against your nature, contradictory.

Because my take on him was that actually he was gay, but that he had kind of a homophobic streak and didn't want to admit to being gay. And so when he said, "Yes, unfortunately," I thought, that's unnecessary -- why say "unfortunately," like
that? When he said "unfortunately," I felt like he was saying, "You and I both know that we don't like gay people," and he was trying to bond with me over the fact that gays are gross or whatever. So that's basically why I said, "Come on, you enjoyed it," and that was the bit where he flinched.

There's a certain mundane reality revealed beneath a lot of the more extreme behavior you
stumble onto, so that by the end of each show, you really feel like you understand how, for instance, a roller-skating, Holocaust-denying survivalist came to be the way he is.

Yeah, it's really true. To me, one of the weirdest things about meeting weird people is how normal they are. I just thought of an analogy this morning: It's kind of like if you saw a naked person wearing a little leather cap -- that little bit of clothing makes them seem even more naked.