Gift of the flower

After drug-addiction and homelessness, a hopeless man rediscovers the healing potential of his childhood fascination. 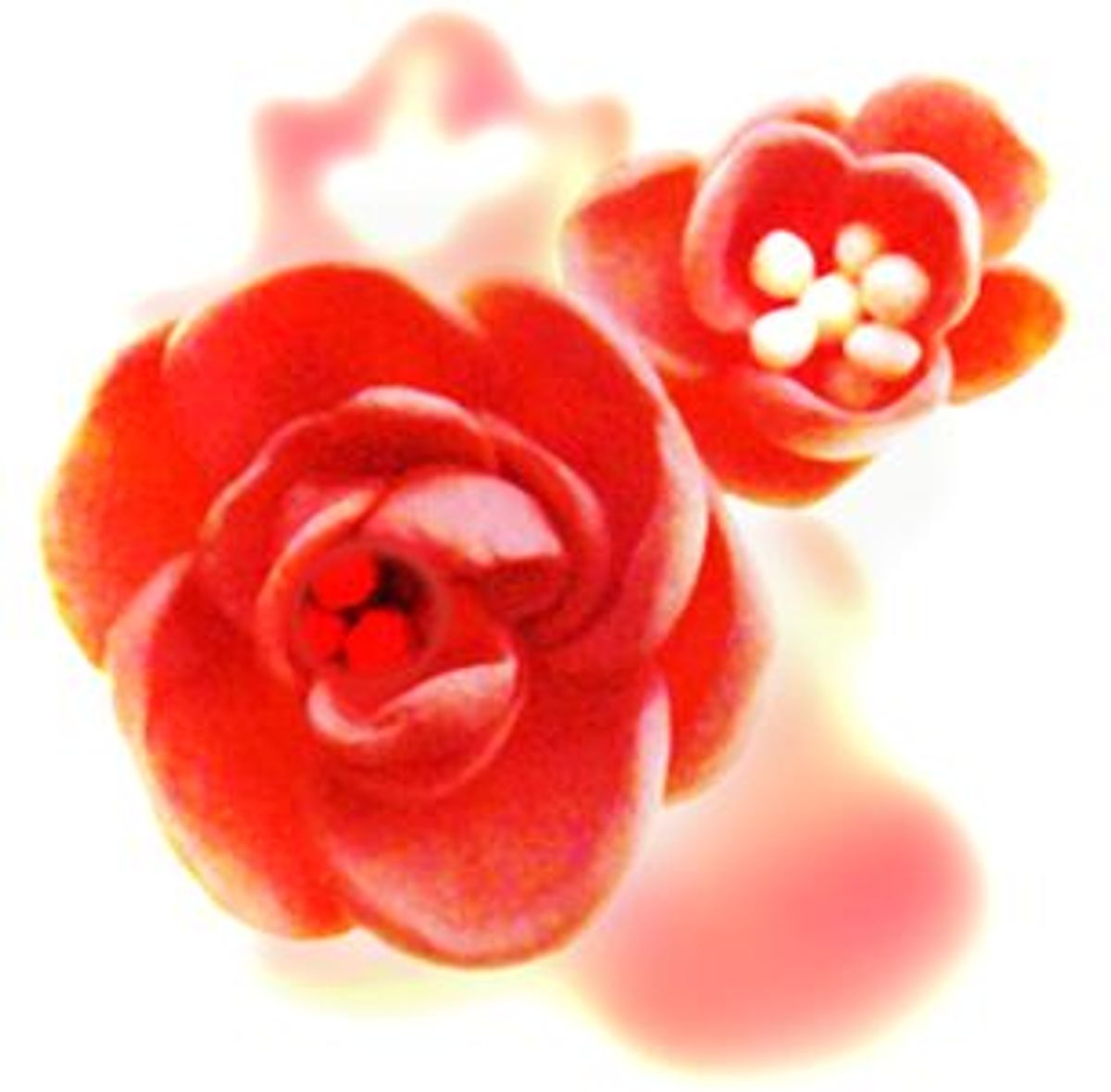 In the back room of Baskin-Robbins, my arms spotted to the elbows with
rocky road and hot fudge, I am confronted by the lounging figure of Mark
Hanson, drug partner, hanger-on, social reject. My friend. He is spread
across some cardboard boxes, leaning his back against the wall. Mark wears his
red winter jacket because it is winter. Other than that he looks the same
as he does every other day of the year: desert boots, green fatigues, black
T-shirt, capped off by a head of straight orange hair that hasn't seen a
pair of scissors in two years. He casually fingers a glob of hot pink
Play-Doh and says, "You know what a pussy looks like?" We are 15 years
old.

"Let's see," he says, holding out the dough.

Cornered, I take the soft clay in my hands and begin to mold. Pussy,
pussy, pussy. I try to recall my only actual sighting, when Mandy Wolf and
I played doctor. We were 8. I begin shaping, momentarily believing
that I might pull this off, but in a minute I am finished. I
have formed a cube that features a single, narrow, vertical depression
bisecting one plane from north to south. I look at my creation and
recognize a model of riverine glaciation from the natural history museum.
I try rounding the vertical edges on the face of the cube. This can't be
right. After years of surreptitiously looking up girls' dresses, spying on
my older sister in the shower, even trying on her panties when alone in the
house, I have little idea what the object of my obsession even looks like.

"Well?" Mark says from behind the blackout glasses he wears night and day,
"Ya done?"

I lay my creation on a carton of pink plastic sample spoons
and try to affect an air of nonchalance. At 15, I am years from
abandoning the notion that people might think I'm cool.

"Ahh! What's this supposed to be?" He turns it sideways and holds it up
next to his own tight, somewhat liver-lipped smile before squashing it
between his fingers. "Nice try, I had a feeling you were bluffing."
He molds the Play-Doh with competent fingertips, using his one long
fingernail for the fine lines. In a couple of minutes he shows me a
delicate flower, something from the orchid family. His lips move, he is
saying, "That's just about right."

In the year of the summer of love, my worst fear seems to be
inevitable: No girl will
ever open her jeans for me.

Chloe knocks on my open door as she breezes into the room. "Can you do me a
small favor?"

She bends to read the title of the book I'm reading, Robert Graves' "The
White Goddess," but
doesn't comment. Her own literary tastes run toward "The Tortures and
Torments of Christian Martyrs and Saints."

"It's this Friday, at the Art Institute."

"Actually, that was the favor." She glances at my bald pate. "Head glare can be deadly."
She's gone, and I hear her big laugh bouncing down the
long hall. I love Chloe's laugh. I love the way she looks. I just love her. Every inch. Our
history is complicated. Currently, we share a flat and are siblings in some
sort of loosely formed, extended family of recovering addicts.

We first met at a Narcotics Anonymous meeting and I was drawn to her quite
innocently. She looked so young, so wounded; her story made me think
guiltily of my own teenage daughter and the rough treatment she had
received at the hands of my addiction. I began seeking her out; a bad
father, commiserating with the daughter of another bad father. I believed
we might heal one another. Just being in her presence seemed to crank life
up a notch.

Then one day, around six weeks after we met, things changed. After a
Saturday morning meeting I found myself at a restaurant table with Chloe
and five or six other people. A few of the women were discussing their
work, different clubs in different cities, where the most money could be
made, Chloe occasionally chiming in. My mind, like the ketchup in the
bottle I held, moved reluctantly, but eventually it hit the potatoes. Chloe
and two of the other women at the table were exotic dancers, but that
wasn't all. Not only was Chloe a stripper, she had worked in several cities
over the course of six or seven years. I looked at her across the table and
realized, then actually saw, that she was not 17 but in her late
20s.

At the time I had been attempting to adjust to a life without romance. I was
right out of rehab and years of abuse, and living like a weasel had reduced
my already fragile self-esteem. I had pretty much given up on the
possibility of having sex with human females in this lifetime. If I were to
experience physical love again, I thought, it would be as a spectator.

And yet, the company of a beautiful, intelligent, witty young woman
stirred some faint echo of hope in me. Hadn't I written myself off
prematurely in the past? I found myself more drawn to Chloe than ever
and the attraction was distinctly less parental. In all honesty, I can say
that I never actually expected anything to happen. It
was more of a fantasy; something to keep me going.

I continued to ask about
her life, filing data, showing concern, laughing at her jokes. I was
flirting, but secretly, the way a priest might test the water with the new
altar boy before making his move. I began calling Chloe evenings,
attempting to be positive and friendly while mute with desire. On one of
those calls, seemingly out of nowhere, she said, "Would you like to come over
and spend the night?" What could I do?

As it turned out I couldn't do anything. I was living in a halfway house
and it was past curfew. They locked the doors at 10. I told her that I
had the next day off (this was technically true, as I was still collecting
welfare), and asked if I could come over in the morning. To my utter
delight she said, "OK, around 10. I'll let you buy me breakfast. Good
night."

Buy her breakfast? I wanted to build her a house. Thank you, God! I savored
the moment for more than a moment before noticing that my roommate was
looking my way. He couldn't help overhearing my end of the conversation as
he pretended to read his Alcoholics Anonymous "Big Book." His face said it
all. He looked down on me with the pity of the saved, the tight mouth
suggesting that I had just arranged to meet the Hells Angels for a road
trip to Las Vegas, from which I would never return. Too late.
I was back in the game!

I bought Chloe breakfast. Then we crossed the street to her apartment. She
excused herself for a minute, returning to sit on my lap at the kitchen
table in non-exotic panties and a T-shirt. She allowed me to kiss her, hold
her, touch her. Did she actually say, "Here I am, what are you going to do
about it?" or was that just her smile talking? We moved down the hall to
her bedroom and had some silent, uninformed sex.

I took my time. I went over her body like a
concerned dermatologist, no freckle too small for my attention. I was
gentle and tender and sweet. I wore a condom. In the missionary position, I
raised her arms over her head and saw an intricate tattoo of a cross on the
pale underside of her arm. It was placed in such a way as to be seen only
in this submissive posture. It had been applied upside down for my viewing
convenience. If I could return to that moment I would speak. I would say: "Tell me what you
like," or perhaps "I'm too preoccupied with my performance to decipher any
clues to your preferences. Can you help me?"

Oh, I needn't have worried, I performed adequately for a man whose genitals
hadn't been wet anywhere but the shower in the last four years. We made
love, as I then understood the concept, for what seemed a long while.
In a way it was like visiting a library, taking down a beautifully bound book and caressing the intricately embossed leather cover without
ever reading a word. I loved her. I didn't know her at all, but I loved her.

My gratitude alone was sufficient for a monogamous commitment, but it was
not to be. Our intimate encounter was never repeated, never discussed.
Chloe made it clear that the only openings she had for me to fill were that
of friend, and one year later, roommate.

I was disappointed that Chloe and I were not going to be lovers, but I would
survive. The fact that she had chosen to spend one afternoon in bed with
me was enough. Because when I put my head between her legs I wanted to stay. I was face to
face with soft, moist, pink perfection. At 15, close inspection of a
Play-Doh pussy had robbed me of all hope. At 40, the absolute beauty of
Chloe's vagina blasted me out of self-pity and into the world. And the
opportunity to sniff, to lick, to kiss that fragrant blossom made me want
to live.

Tom Wolbarst is a writer living in San Francisco.