Blacks have voted overwhelmingly Democratic for years, but now they seem to be rethinking their political allegiances. 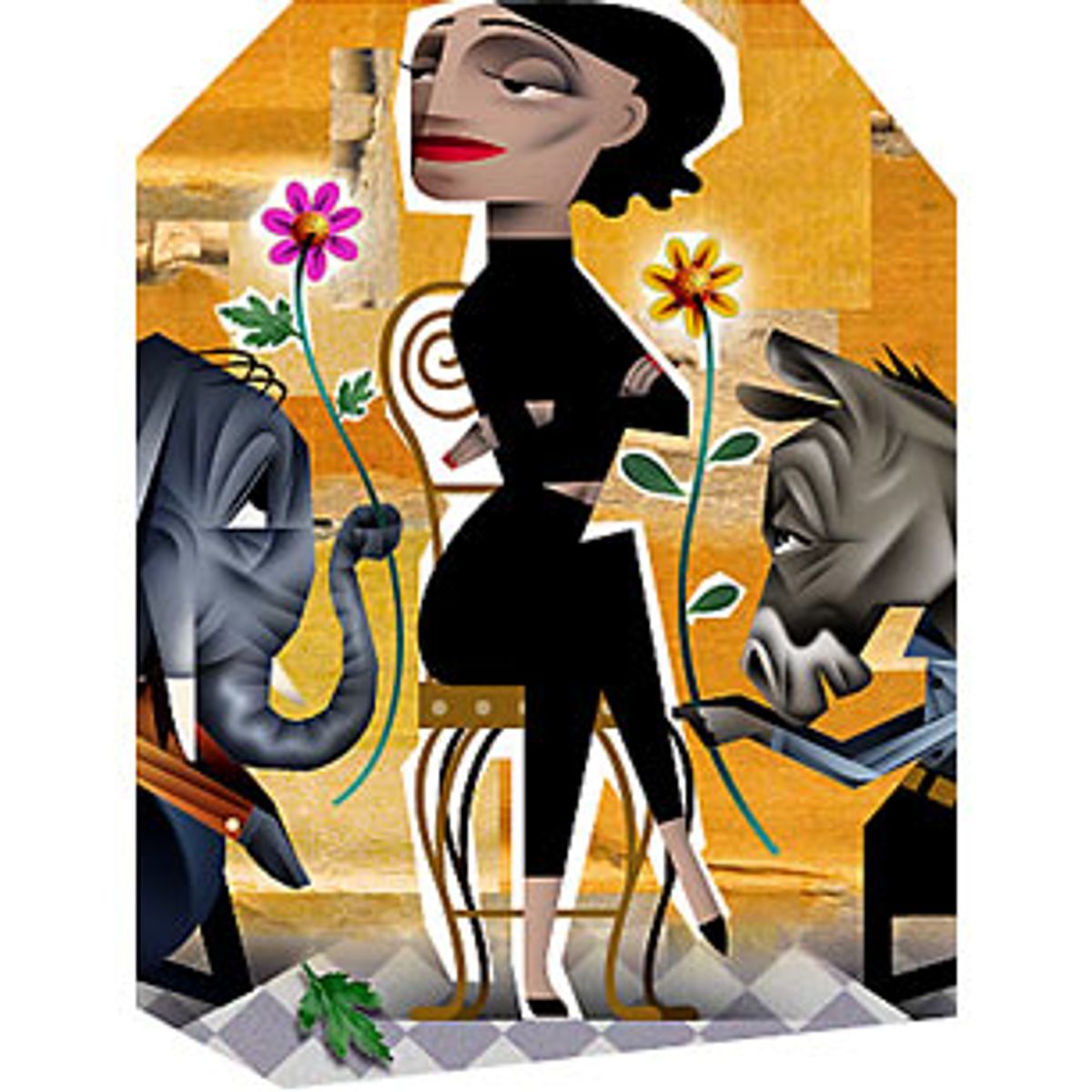 Now that high-profile black Republicans like Colin Powell and J.C. Watts have emerged to lead the way, it would seem logical that rank-and-file blacks would feel comfortable rejoining their historic home in the party of Lincoln.

But so far, public-opinion polls show little evidence of such a trend, although a growing number of blacks do seem to be identifying themselves as independents. Whites have been moving away from the parties as well, but not at nearly the same speed.

Blacks make up about 10 percent of the electorate and still vote overwhelmingly Democratic (89 percent in the 1998 elections), so the issue is not so much that they are switching parties; it's that they're ditching parties altogether.

According to David Bositis, senior policy analyst at the Joint Center for Political and Economic Studies, there has recently been a strong upward spike (more than 50 percent this year alone) in the number of blacks who identify themselves as independents, which has now reached fully 23 percent of the black electorate. This is still low compared to the general population, 38 percent of whom identify with the independent camp, according to a Gallup poll, but blacks seem to be catching up fast.

Bositis says 68 percent of blacks still identify themselves as Democrats and only 5 percent as Republicans; interestingly, twice as many black men say they are Republican as black women. But, "Blacks are starting to say 'no' to both parties," concludes Bositis, "many by not voting at all."

So why would blacks be poised to set aside their 50-year relationship with the Democratic Party? For clues, we may have to look back over black political trends throughout history. When blacks were first enfranchised in 1870, nearly all of them initially gave their allegiance to Abraham Lincoln's party of abolition, the Republicans. But only 28 percent were still Republican by the time of FDR's second New Deal administration in 1936.

Black allegiance to the Democratic Party kept increasing until it peaked in 1964, when Lyndon Johnson, who signed the Civil Rights Act into law, won the presidential election with 94 percent of the black vote.

In recent election years, roughly nine in 10 black votes have still routinely been going to the Democratic candidate. But a growing number of voices in the black community are asking themselves why this should continue.

Phyllis Berry Meyers, a black Republican who heads the National Center for Leadership Training and Recruitment at the Black America's Political Action Committee, argues that it is simply not strategically sound for blacks to support the Democrats so monolithically.

"Blacks, especially older black women, are the greatest bloc that's solidly Democratic. Why? That commitment is so one-sided," says Meyers. "Besides, it's crucial that we not allow the Republican party to be the haven of whites. Of course black Republicans agree that lots of progress still needs to be made; we just differ on how to get there."

But George W. Bush is trying to get there in a hurry. He has taken his presidential quest to neighborhoods that few Republicans -- other than Jack Kemp -- would walk through, much less campaign in. In Harlem, Bush relied on the Rev. Floyd Flake for an introduction to potential black converts during an October campaign stop. Flake, a former Democratic congressman, specializes in being a goodwill ambassador for Republicans in the 'hood, having campaigned for Rudy Giuliani and George Pataki.

Calling Bush "my homeboy," the pastor praised the governor's willingness to go "into communities to demonstrate that no party has total access to and control of any group in this country." Bush's "compassionate conservatism," an appeal to core values minus the rancor, just might win a new black following for the GOP.

Bositis' polling indicates that blacks do tend to respond well to conservative political ideas. GOP presidential candidate Steve Forbes, who ignored black voters four years ago, discovered this recently when he was interrupted by applause nine times as he addressed the black National Baptist Convention in Tampa.

The issues that won the crowd over? Conservative ideas like school choice and replacing Social Security with personal retirement accounts. Nor is Forbes above playing the race card. He described school-choice opponents as "big-government politicians standing in the schoolhouse door to keep children trapped in dangerous, failing schools."

And he argued that the Social Security system fails to fully benefit African-American men, because with their relatively short life expectancies they cannot enjoy the fruits of their own labor.

Opportunistic though his arguments may be, Forbes is effectively tapping into blacks' actual political urges at a time when many seem to be feeling simultaneously more confident yet more frustrated with their political options.

There seems to be room for conservatives to make major gains with black voters in a number of issue areas. According to the BAMPAC, for example, 48 percent of blacks oppose abortion. And Public Agenda, a nonpartisan New York-based research firm, says that 54 percent support school vouchers.

The research indicates that black voters also are feeling neglected by the major parties. BAMPAC found that 47 percent feel that the Democrats take blacks for granted, compared to 72 percent who feel that way about the Republicans.

Stranded between the proverbial rock and a hard place, therefore, most blacks continue to bide their time in the Democratic Party, and wait for someone to pay attention. Not all, though. Nat Irvin, president of Future Focus, a black futurist institute at Wake Forest University, has little patience for party talk.

"We've moved beyond defining problems in party terms," says Irvin, who says he is a registered independent. "Most of what we, as black people or any people, are faced with in the future defies political philosophy. If your dad has Alzheimer's, is that a Democratic issue or a Republican issue? It's neither. It's a human issue.

"Black folk ought to spend time thinking about the Human Genome Project and how we can get a stronger foothold on biotechnology and the Internet," he says. "How do we get the jobs done that need to be done politically? That's the future. Parties are the past."

"A 60-year-old black Democrat most likely got his partisanship from his parents when that meant being pro-civil rights," Bositis continues. "But we're talking about history here and kids, irrespective of race, don't know history. You have to be around 70 to remember Truman desegregating the military. You have to be 55 or so to remember Brown vs. Board of Education; 45 to remember the Civil Rights Act; 41 for Martin Luther King's assassination.

"That's all a long time ago for kids today and these things aren't taught, or aren't taught very well, in our schools. To them, Hannibal crossing the Alps and marchers crossing the Edmund Pettus Bridge all happened about the same time," Bositis laughs.

Bill Stephney, president of Stepsun Records and a co-founder of Public Enemy, agrees. "You have to understand the perspective of some 29-year-old hard-working guy, maybe his folks came here from Trinidad. He just doesn't see the world like a black person from generations of sharecroppers. They're not always going to draw the same conclusions on things."

Stephney is himself a 37-year-old self-made millionaire with grandparents from the Caribbean and Latin America -- a family history that he says affects his world view.

"That noble generation, the 'Eyes on the Prize' generation, everyone admires their sacrifice and courage, but they were a rather homogenous group," he says. "We're more fragmented today. The black person standing next to you might look just like you but is more concerned with gender, or sexual orientation, or entrepreneurship. The hip-hop generation just sees the world through a different lens."

Chris Rock, neither a Democrat nor a Republican, may be the perfect representative of this generation, this new breed of black youngster who inherited an integrated world, as well as the freedom to critique it. He has featured the full range of black leadership on his television talk show, and offered each a hilarious critique that brought down the house. After telling Jesse Jackson how much he admired him, he then asked, "But Rev. ... what do you do?"

He asked the Rev. Al Sharpton why poor whites couldn't lead some of the protest marches, and J.C. Watts why he associated with a party that often gave black people such a hard time. The true mark of his effect on the political equation may be the backlash forming against him among the black liberal bourgeoisie.

It's probably the internal critique, though, that keeps most black independents and Republicans in the doghouse with other blacks. Stephney points out that many young blacks first began to question the liberal status quo during the height of the 1980s crack wars.

"It wasn't the white bogeyman on horseback" that had blacks running back and forth from the subway in Stephney's Brooklyn neighborhood, a mecca for successful blacks like himself and Spike Lee. "It was brothers with leather jackets and matching Nikes and guns," Stephney remembers grimly. "But liberals didn't want you talking about that. That [hypocrisy and censorship made] lots of young folks rethink what they thought were their politics."

That political rethinking is occurring in black communities all over the country right now. And the candidate, or the party, who recognizes it for the golden opportunity it is may well be the beneficiary of a significant boost in next year's elections.