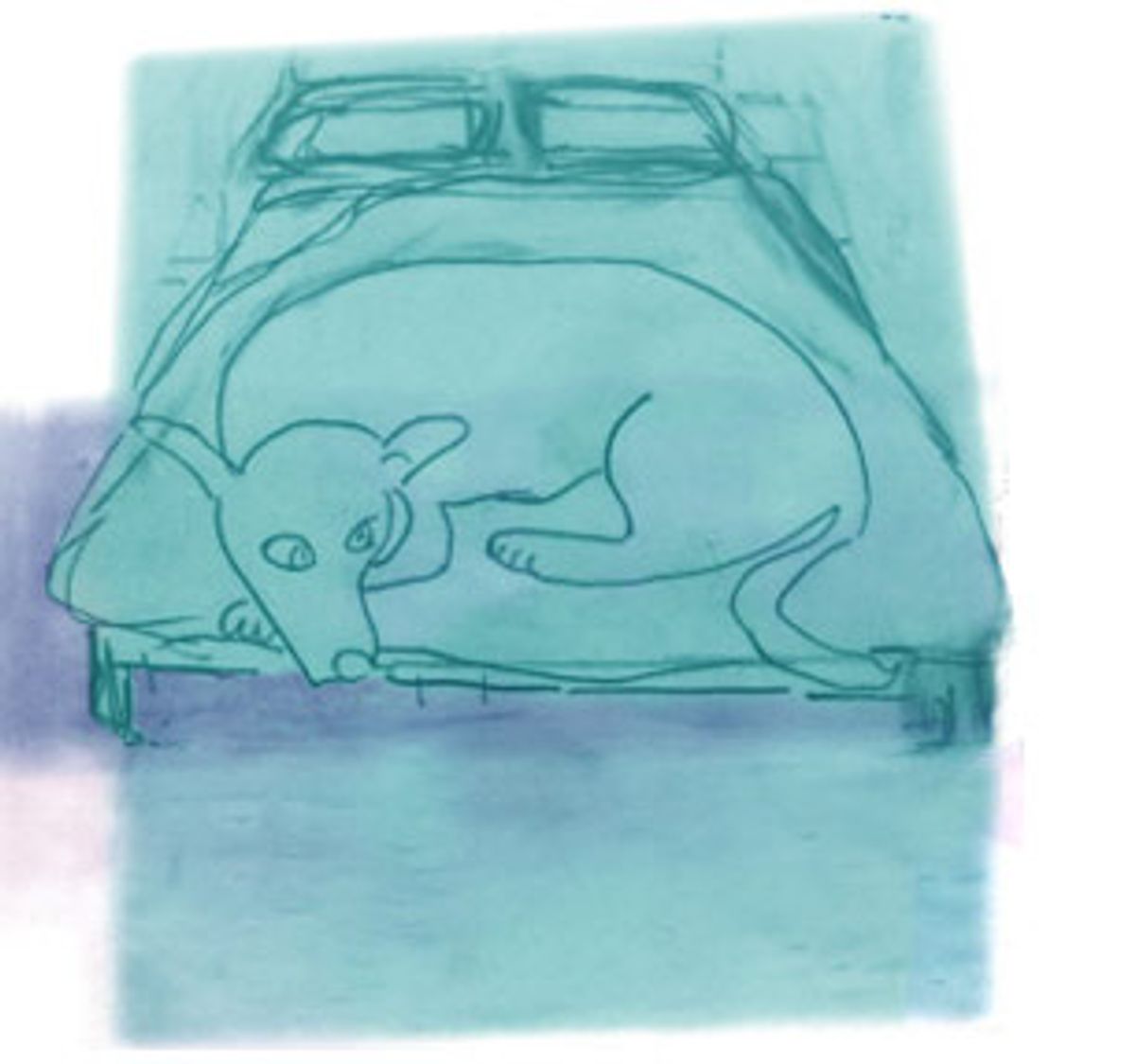 After four months of dating, Lina and I were at the stage where we were having a lot of sex in the mornings, before coffee even, that kind of daylight sex that imprints another person's face on your brain and flavors the e-mails you exchange during the day. The alarm would go off and we would begin kissing, throwing back the bed sheets. I would grope under the pillow for the condoms I'd put there, all the while keeping a wary eye on Violet, her dog.

I should have known better. When our mutual friend Christina had first set us up, she'd described Lina in an e-mail: smart and serious, had family in Colombia, graduate student in history, was fond of whiskey and lived with an energetic, somewhat unpredictable dog named Violet. Without elaboration Christina added: "Lina's in denial about her dog." At the time, I took this to mean that Lina and Violet had a relationship that Christina didn't understand. I never thought about what it would mean for us.

As one date turned into two, three, four, I gradually learned about Lina's strong attachments to her dog, whom she described in such glowing, loving terms I imagined Violet as a Lassie; on dates five and six, I finally met an obviously cunning dog, the kind who'll let you starve in the collapsed mineshaft for your foolish curiosity. After seven dates, I figured out that Violet's love for Lina was a jealous love. Lina admitted she felt guilty for spending too many nights out away from Violet, who sometimes misbehaved when she didn't get enough attention. Lina also admitted she'd never been as strict as she could have been, never provided the kind of Alpha dog leadership that socializes a dog for human households. At that point, it occurred to me that Violet seemed less like a dog and more like a spoiled chimpanzee that knows where the keys and petty cash are.

One night after a movie, Lina and I made out on the dewy grass of the university quad and told each other secrets from our romantic pasts. I found out she'd gotten Violet as a puppy from a Chilean soccer player who discovered too many times the hard way that his pretty, red puppy liked to chase down soccer balls, tackle them and chew them until they exploded in her astonished face. On and on it continued: The more intimate we became, the more I learned about Violet. By the time we were sleeping together, Lina confessed that Violet had once bitten a child in the face, and Lina was afraid she'd have to euthanize her dog.

By that point, Violet had spread trash throughout the house while Lina and I were out; she also disappeared a five-pound bag of dried beans. I'd also seen her bristle and charge other dogs, barking ferociously as if she were protecting her territory, even when we were in the park. Sometimes while chasing a Frisbee, her ears flattened, her eyes widened in devil-dog fashion and her lips curled berserkly. Great, I thought, my girlfriend's dog is Cerberus. And when Violet chewed my credit card up into tiny slivers of gray plastic and chewed off the buttons of my jeans, I remembered what Christina had said: Lina was in denial about Violet.

In the context of this emotional triangle, sex started to get strange. Once when Lina and I were having sex, Violet circled shark-like at the edges of the bed. To be fair, Violet was used to getting a walk every morning at 7:30 and recently it had been as late as 11. The inevitable result was that increasingly we found ourselves having sex with the dog.

When Violet thought we were not looking, she would sneak both paws onto the mattress, first one and then the other, and lean on the bed like a praying child. With the same imploring eyes, she would lay her chin down and watch. The canine voyeur.

Because of Lina's inscrutable relationship with her dog, there was an added emotional dimension to Violet's intrusions, but even when we escaped to my house, my cat made her presence known. Jumping onto the bed, she perched on the pillow, staring at our bodies with a blank expression. It was the same look with which she approached her reflection in the mirror: I see a shape, two shapes ... I think ... but I can't be sure ...

But unlike my cat -- who sees nothing at all -- Violet sees very well. No puzzlement crosses her fuzzy face as she watches, no shame, no disgust. She watches intently. I like to think it's the universe regarding us benevolently through her attention, a reminder that what we're doing is a wholly unique moment as well as a reiteration of billions and billions of seamlessly similar moments in the life of the species. Some days I take pleasure in the reassuring disinterest of Violet's eyes; I lean closer to her so that I can see Lina's pale body, curved and distorted, shining in her dog's glistening eyes.

But Lina pulls me away -- trying to get me to concentrate on her. Even though she is emotionally preoccupied by Violet, she still finds it disturbing to see me similarly preoccupied. Afterwards, while my grad school girlfriend and I are lying together, discussing quietly how we'll each spend our days, the dog whines nearby. Then, all of a sudden, she's on the bed, towering over us triumphantly. "Violet!" I scream: "Get off!" Her eyes screw around psychotically and she bolts away. And just as we begin to postpone breakfast for another half hour, there's Violet again, back on the bed and standing over us impatiently. What is taking so long?

The kinkiness of "pet" and "sex" in the same sentence underscores the prevailing taboo about our intimate relations with animals. The pet books don't ever mention it; nor do psychologists who study human-pet relationships. But this omission is also rather curious. As with humans, we expect to receive physical and emotional pleasure from our relationships with animals. We keep pets because we like how they feel, and we like how our bodies interact with theirs. A good cat is one that'll curl in your lap when you read, purr when you scratch it, know when play is play, knead you with it claws in and lick you once in a while. This may not be erotic, per se, but it's not something one would normally allow a platonic friend -- much less a stranger -- to do. For most people such physical intimacy is limited to lovers, infants and -- yes -- pets.

Lina and I are still together -- which means that Lina and Violet and I are still together as well. And Violet still climbs on the sheets, puts her paws on us, sticks her snout in our faces and collapses long beside our tangled bodies. As long as her wet snout stays away from our
crotches, I'm not ashamed to admit that I don't always push her off. If Lina has her denial, I have my grudging acceptance -- as long as Violet
and Lina have the relationship they do, Violet's presence in the bedroom
is unlikely to change.

And I know there's nothing I can do about the nights I don't sleep over, when I suspect that Violet's sleeping and cuddling on my spot on the bed.

Michael Erard is a graduate student in English at the University of Texas, Austin.