Bring on the ghosts, the ghouls and the unhappy endings. 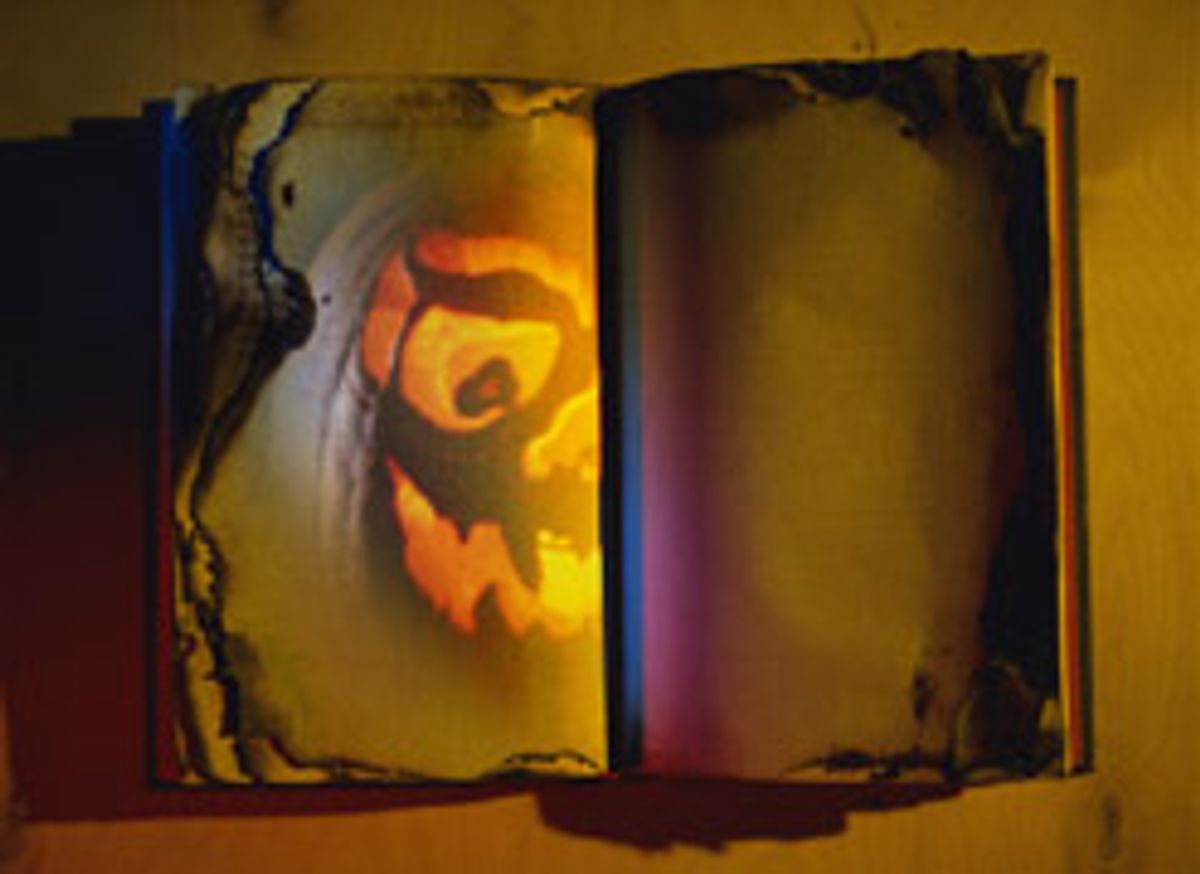 There's no holiday like Halloween, with its domesticated thrill of fear,
its transfiguring disguises, its license for mischief and -- not least -- all
that candy. What creature, natural or supernatural, could be unnatural
enough not to love Halloween? Well, maybe the tooth fairy.

Dental advocates like Herself who become tempted to slip a book
into the trick-or-treat bag instead of candy will find plenty of goodies
to choose from. Anthologies of ghost stories, chapter books about
witches, and gothics for tots crowd the shelves this time of year.
They'll keep the Halloween spirit alive well past Thanksgiving, when
long-hoarded sugar pumpkins have turned to rock.

Angela Barrett -- whose heroic "Joan of Arc" and "Snow White" have become classics -- provides delicate illustrations for "The Random House Book of Ghost Stories," which features tales that are, on the whole, more melancholy or comic than frightening. Originally published in Great Britain, it brings together such British masters as Leon Garfield, Penelope Lively and Philippa Pearce.

In Pearce's "The Yellow Ball," a pair of children call
up a phantom dog who appears each evening at dusk to chase her favorite
toy; eventually they come to understand their unmeaning cruelty in
keeping her tied to this world.

In Lively's "Uninvited Ghosts," a family of specters as irritating as in-laws haunt the children of the house. They sing hymns, suck juicily on peppermints and recite arithmetic tables in the children's ears so they can't concentrate on their homework; it takes all the young heroes' ingenuity to get rid of them.

And Garfield's story, "Laughter in the Dark," is a Dickensian
vignette about a miser. Like the master, Garfield creates an atmosphere of seething gloom that nevertheless can't quite squelch the world's essential benevolence.

A few of the book's selections -- Joan Aiken's "Little Nym," John Gordon's "Grandmother's Footsteps" and Susan Hill's "A Friend Forever" -- are variations on the theme of the lonely ghost who tries to carry away a living soul for company. These few stories are truly chilling.

"A Newbery Halloween" takes on ghosts and goblins from our side of the pond.
Some pieces, such as Beverly Cleary's "The Baddest Witch in the
World" and E. L. Konigsburg's "A Halloween to Remember," are excerpted
from books probably already sitting on the shelves of the well-read child.
Still, it's nice to be reminded of why "Ramona the Pest" and "Jennifer,
Hecate, Macbeth, William McKinley, and Me, Elizabeth," from which these
excerpts are taken, deserve to be read over and over.

Other selections are less familiar, more self-contained. In my favorite, Konigsburg's "Camp Fat," a ghostly counselor visits the bedsides of a pair of
troubled campers. She shows them pieces of damaged jewelry with
treasures hidden inside -- a metaphor for the selves they keep hidden.

If "The Random House Book of Ghost Stories" and "A Newbery Halloween"
are assortments of Godiva truffles, Robert D. San Souci's "Short and
Shivery" series is the literary equivalent of candy corn. San Souci
collects and retells supernatural stories -- folk tales, urban legends,
even the occasional story from Hawthorne or Hans Christian Andersen -- in a plain, straightforward voice. No literary flourishes here; if there ever
were any, San Souci has stripped them out. Brief, easy to follow, with a
spooky twist rather than a subtle moral, these tales are perfectly
calculated to tempt young adrenaline junkies. Even the ugly
black-and-white illustrations seem deliberately unpretentious, as if to
reassure readers that this isn't stuff the grown-ups will push you to
read.

Little Wendy, the heroine of Alice Low's "The Witch Who Was Afraid of
Witches," would probably appreciate those tales. Wendy lives with her
two bossy older sisters, Polly (isn't that a witchy name!) and Wog. "You
don't know anything, and you'll never learn," they tell her. "Your voice
is too weak. You don't even know how to cackle." Poor, cowed Wendy
believes them. But, appropriately enough in a chapter book for early
readers beginning to discover their abilities, Wendy finds her powers
burgeoning once her sisters have flown off to their Halloween revels. An
unsaccharine Cinderella story, "The Witch Who Was Afraid of Witches"
delivers sweet revenge. Illustrations by Jane Manning show Wendy as
a spunky, green-skinned witch with a magnificent nose and a chin wart any
kid would be proud of.

Witches abound in juvenile fiction, from Harry Potter to the White Witch
of Narnia: Wendy is only one of many. Nonfiction books about witches are
rarer. "Witches and Magic-Makers," by Douglas Hill, illustrates some of
the difficulties of treating the subject without relying on imagination.
For one thing, where do you draw the line between magic and religion?
Hill strives for cultural sensitivity by including sections on Western stereotypes of witches and wizards, then touches on the world's
polytheistic religions, tossing in rituals, shamans and paraphernalia with abandon. He also includes a section on modern Wiccans.

"Witches and Magic-Makers" is an Eyewitness book, a series whose design shook juvenile nonfiction when it first appeared in the '80s. Images of objects -- mostly photos -- are scattered against a white background, with brief captions and, occasionally, a thin black rule around the edge of the page to reign them in. The design gives the appearance of objectivity -- somewhere between a museum guide and a scrapbook.

A delightful pair of novels for 10-year-olds, the first two books in "A
Series of Unfortunate Events," make no attempt at objectivity. Lemony
Snicket, the (surely pseudonymous) author, twists the conventions of juvenile literature around his little finger. "If you are interested in stories with happy endings, you would be better off reading some other book," he writes in the opening of "The Bad Beginning," going on to say:

In this book, not only is there no happy ending, there is no happy beginning and very few happy things in the middle. This is because not very many happy things happened in the lives of the three Baudelaire youngsters. Violet, Klaus, and Sunny Baudelaire were intelligent children, and they were charming, and resourceful, and had pleasant facial features, but they were extremely unlucky, and most everything that happened to them was rife with misfortune. I'm sorry to tell you this, but that is how the story goes.

Violet, Klaus and Sunny lose their parents in a horrible fire and get
sent to live with their evil cousin Count Olaf in his dismal mansion.
Olaf tries scheme after scheme to get his hands on their vast fortune: He
dangles the infant Sunny out the window in a birdcage and tries to trick
14-year-old Violet into marrying him. The Baudelaires' friends and
guardians, well-intentioned but hapless, refuse to believe them again
and again as they beg for help.

Fortunately, the children are intelligent and resourceful enough to foil Olaf in both books, and to provide readers with admirable heroes with whom they can identify. But Snicket, true to his word, never lets them rest on their laurels. Again and again he rescues Olaf, to ensure that he will return in all his dastardliness later in the series. The books are appealing objects -- small and thick, with deckle-edged pages and graceful illustrations -- at once dramatic, understated and humorous. Any young reader should be delighted to find them in her trick-or-treat bag.

The Witch Who Was Afraid of Witches. By Alice Low. Pictures by Jane
Manning. HarperCollins, 1999, 48 pages