A new book accusing Pius XII of being "Hitler's Pope" overestimates the pontiff's influence and underestimates his character. 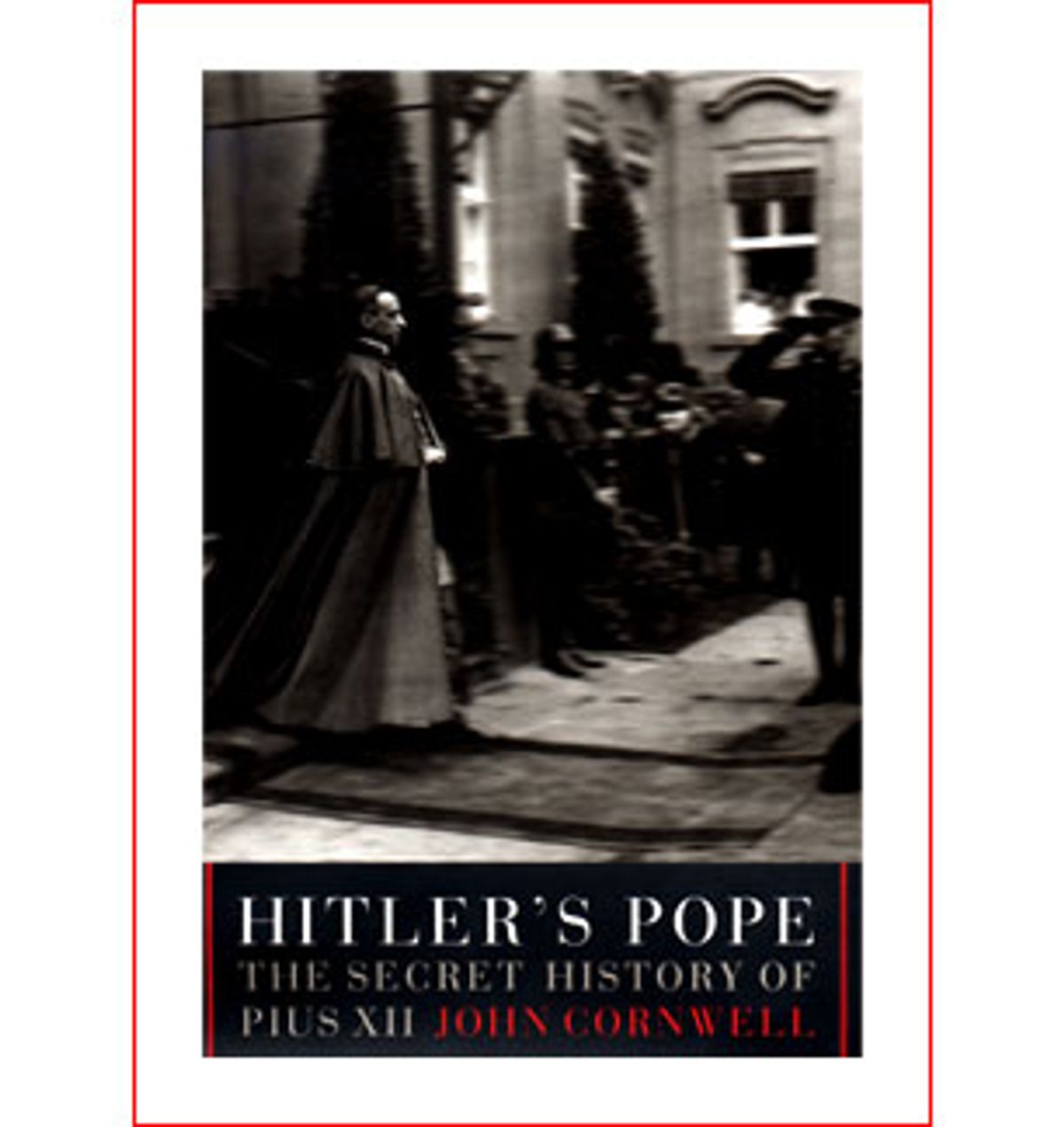 We have had Daniel Goldhagen, in 1996's "Hitler's Willing Executioners," dubbing the entire German nation congenital anti-Semites responsible for Auschwitz, and Philip Gourevitch holding the Clinton administration morally responsible for the slaughter in Rwanda in 1998's "We Wish to Inform You That Tomorrow We Will Be Killed With Our Families." In the genocide-accusation game, almost everyone close to a collective crime is subject to severe cross-examination.

And now it's the turn of a pope: Eugenio Pacelli, Pope Pius XII, leader of the Catholic world from 1939 to 1958. Was even the spiritual heir of Peter a Nazi collaborator? In "Hitler's Pope: The Secret History of Pius XII," Cambridge historian John Cornwell poses this question. It is not being asked for the first time: Ever since Saul Friedlander published his "Pius XII and the Third Reich" in 1966, Pacelli has been suspected of cowardice, self-aggrandizement and selfish Realpolitik.

According to many commentators, Pius maintained an ambiguous stance of neutrality during the Second World War, significantly failed to speak up about the Holocaust and failed to intervene in the notorious deportation of 1,000 Roman Jews in 1943 -- even though the SS trucks made a deliberate detour so that the German soldiers could get a glimpse of St. Peter's Square. Some historians have shown Pius in a sympathetic light. A 1992 book by historian Anthony Rhodes called "The Vatican in the Age of the Cold War" claimed that Pius could not speak truth to power when that power was Hitler. The pope, Rhodes argued, was doomed to Faustian bargains in which he could not prevail.

With a current move in the Vatican to beatify Pius, the controversy over his wartime behavior has heated up. Cornwell's book attempts to deliver a definitive blow, to nail Pius once and for all on the charge that he was a passive accomplice in the Nazi reign of terror. Pius, argues Cornwell, could have swung the vast weight of global Catholicism against Hitler. In particular, Cornwell claims that Pius could have mobilized the powerful German Catholic churches against the coming atheistic dictatorship. Why did he not do so? Wasn't Hitler, by his own dark admission, Christianity's most rabid enemy?

Cornwell has brought some new material to bear against Pius, including recently discovered letters that show that the suspicion of papal cowardice had been voiced even during the war by the British envoy to the Vatican, Francis d'Arcy Osborne. On July 31, 1942, for example, Osborne wrote from inside the Vatican:

It is very sad. The fact is that the moral authority of the Holy See, which Pius XI and his predecessors had built up into a world power, is now sadly reduced. I suspect that His Holiness hopes to play a great role as a peace-maker but, as you say, the German crimes have nothing to do with neutrality.

Yet as damning of Pius XII as they may be from a moral perspective, Osborne's letters do not exactly prove that Pius was secretly rubbing his hands behind the scenes at the thought of Nazi atrocities, or even gazing at them indifferently. Quite the contrary. When the Dutch Catholic bishops finally condemned the round-up of Jews in 1942, a furious Hitler retaliated by killing 40,000 Jews who had converted to Catholicism. A horrified Pius decided at that point that saving lives was more worthy than uttering papal condemnations.

It was a familiar reaction; Nazi ruthlessness made bargaining appear pointless. Indeed, hadn't British Prime Minister Neville Chamberlain made more or less the same calculation only a few years earlier? It was called appeasement. We forget that most heads of state collaborated with Hitler while they were afraid of him; fear, alas, is a wonderful silencer of scruples, especially when the executioners are next door.

One cannot forget, as Cornwell seems sometimes to do, the implacable realities in which Pius had to exist. He held sway over a tiny principality rather inconveniently located in the capital of Fascist Italy: not exactly the ideal location from which to launch jeremiads against Nazism. As Cornwell points out, the Vatican "depended even for its water and electricity supply on Fascist Italy, and could be entered at any moment by Italian troops." Pius himself was once physically assaulted by a Fascist gang on a Roman street.

Nor should we forget that Pius had edited his predecessor Pius XI's famous -- though fruitless -- condemnation of racism, the flaming encyclical "Mit brennender Sorge" in 1937. (Which, by the way, if Cornwell's assumption that a papal condemnation would have influenced Hitler, should have had some effect.) And in 1940, as Cornwell concedes, Pius XII was even involved in a wild plot to kill Hitler.

Pacelli himself was actually an inscrutable, complex, scheming and not altogether likable character. Born in 1876 in Rome, he was a scion of that city's "black nobility," aristocratic families devoted to service of the Vatican. In photographs he appears as a somber, intense youth with a streak of priggish precociousness but also of bibliophilic refinement and sensitivity. From his earliest years his vocation was never in doubt. His sister later recalled that "he seemed to have been born a saint."

Pacelli was fond of having himself photographed with little birds perched on his finger: an image of gentle but prehensile Franciscan strength. He was also, as Cornwell shows, the first pope to master mass media, using it to great effect in augmenting his own prestige.

Pacelli was legendary, too, for his industrious and far-ranging intellectualism. One of his Vatican colleagues recalled once seeing a huge pile of books on his desk. "They're all about gas," Pius explained. They were. He later addressed, with astonishing technical fluency, the International Conference of the Gas Industry.

Pius was also worldly and ambitious. As papal nuncio to Germany in the '20s, he drew up the Concordat with the Weimar Republic in 1929 and later the infamous Concordat with Hitler in 1933, an agreement that, as he saw it, gained immunity for the German churches from Nazi attack. Hitler, of course, saw it as a stamp of approval for his regime. Hitler's and Pacelli's opposed designs formed, says Cornwell, "a tragic subtext" of the Holocaust.

Cornwell's principal accusation against Pius is that he was a megalomaniac who turned the papacy into an instrument of unprecedented autocracy through his own willpower and centrist ambition. It could also be argued, however, that the papacy itself was in an epoch of crisis after 1870 and that Pius tried to solidify the church through an excessive centrism in response to the rise of totalitarianism and secular radicalism. Essentially, he was a self-styled benevolent autocrat; collegial consensus and shared decision-making were simply not his style.

Did Pacelli's obsessive centrism, though, as Cornwell argues, castrate the German bishops in their dealings with Hitler? Cornwell seems to think that German Catholics could have stopped Hitler in his tracks if they had been given the green light by either Pius XI or Pacelli himself. He gives the example of the Nazi euthenasia program, which was halted in 1941 after vehement protest by the bishop of Munster.

Catholic protest had also ignited when crucifixes were banned in Munich schools; then too, the Nazis backed down. Indeed, Cornwell argues, contrary to myth, the Nazis were extremely sensitive to public protest. Catholics protested against euthanasia and confiscated crucifixes and won; but on the Jews, conversely, they kept quiet.

Cornwell's accusations carry some weight. German Catholics as well as the Holy See itself were shamefully silent on the destruction of the Jews, of which all of them were certainly aware. But does any of this prove that Pius' restructuring of the papacy -- or indeed his lack of condemnatory utterance -- actually aided and abetted Hitler? It's a far-fetched claim, to say the least.

Would a more independent German church have resisted Hitler more forcefully? This is, ultimately, an unanswerable question. But since the German Protestants, who obeyed no central papal-style authority, did little to stand in the way of Nazism, it's reasonable to doubt that German Catholics would have. (And it's worth noting that Pius' later strong line on Communism influenced Stalin not one iota.) One wonders, too, if German Catholics didn't simply use Pius and his papal bossiness as a scapegoat for their own cowardice. In a strange way, it let them off the moral hook.

And there are other problems, too, with Cornwell's analysis. The euthenasia program was not, in fact, stopped; it simply went underground. More important, euthanasia and school crucifixes did not occupy the same place in Hitler's demonology as did the Jews and their extermination. Hitler would compromise over the former, but over the latter, not a chance.

Cornwell seems to think that, by standing up to Hitler, Pius could have changed the course of history. But as appealing as this scenario may seem to us half a century later, he clearly overestimates the degree of Pius' power to influence an unscrupulous dictator. It's telling that Joachim C. Fest, in his monumental 1973 biography of Hitler, does not mention Pius even once. The pope is not a power in the world; he is a moral influence among Catholics. The totalitarian dictators were not Catholics, to put it mildly. Their view of the world was determined by artillery and tanks. As Stalin famously sneered about Pius, "Where are his divisions?"

Lawrence Osborne is the author of "Paris Dreambook" and "The Poisoned Embrace," both published by Vintage. He lives in New York City.