A cyber-tour of sites for the scariest jack-o'-lanterns ever: Martha Stewart, Christian evangelists and dead celebrities. 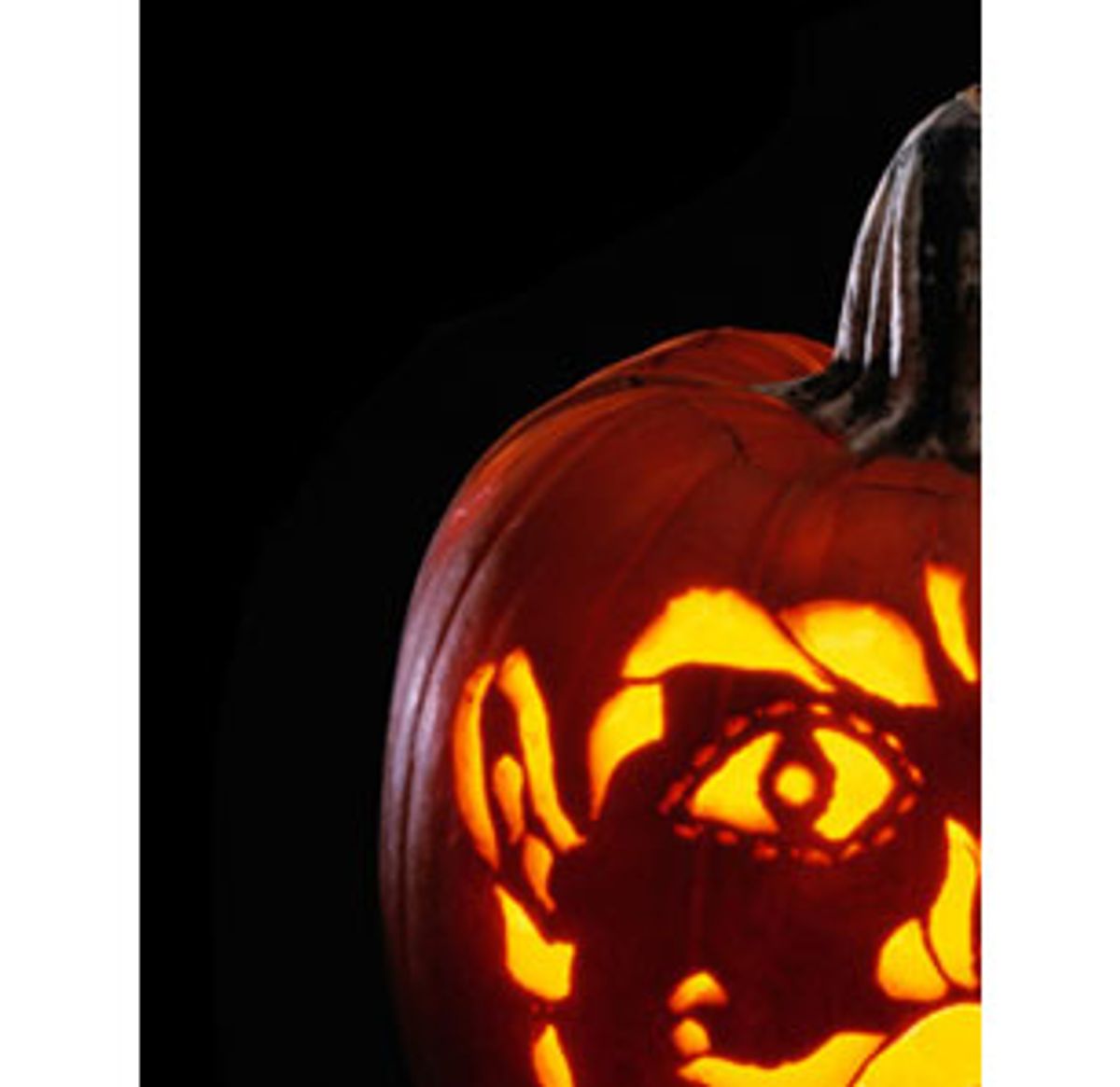 Of the many traditions surrounding Halloween, the custom of pumpkin carving best illustrates the American penchant for beating the fun out of any childhood activity. The homemade jack-o'-lanterns of yore will look downright homely next to the gourmet gourds to be found on instructional Web sites that run the gamut from the saccharine saint, Martha Stewart, to the sacred Christian cross.

Call me a pumpkin purist, but somehow carving and lighting a pumpkin seems to be a sensible practice, while painting and dressing up a pumpkin feels a little, well, silly. For examples of pumpkins in drag, you need look no
further than the suspiciously overproduced series of decorated produce on
display at Family Fun magazine.The wicked witch of the Midwest is worth a cackle, but please don't stay. True
pumpkins are carved, not shellacked.

According to high-gloss pumpkin wisdom, to carve the gourd, the non-artistically inclined will need a template: tape a sheet of paper with a pattern to the face of the pumpkin and trace it with pinpricks. Next, carve the pattern (after cutting a hole in the top and emptying the guts, of course). But where to go for the perfect template?

A typical collection of such templates is available at Swan's Pumpkin
Farm in Racine, Wisc. This modest site oozes small town Americana and 1997 default-settings Web design. For example, the Events page announces a pancake breakfast at a local church, and comments about the site are invited to be sent to "Farmer Ken."

The pressure of competition starts to build when you go to the Web site of The Pumpkin Masters," self-described as "America's Pumpkin Carving Company." This site offers the sentimental tale of Paul Burdeen, also of Racine, who taught carving to his children, then to children in community centers across the Midwest (and presumably to leper colonies and burn wards across the globe).

The site notes that "in 1983, Paul Bardeen died and as a tribute to him, his children decided to share his carving techniques with other American families." This they have done, founding a company that sells expensive sets of tiny plastic tools and templates on cheap paper. I figure the markup on these little kits is in the neighborhood of 10,000 percent -- a touching tribute to the American Way.

Viewers who pause to decipher the work of Pumpkin Masters' self-proclaimed "Pumpkin Picassos" may sprain an eyeball as they try to make sense of what at first seems like a senseless pattern. The tension presumably vanishes when they "get" the pumpkin: It's George Steinbrenner! It's Pocahontas! It's the Last Supper!

Another pumpkin artist who favors non-seasonal representation is Tom
Bennett, who trained himself on templates from the Pumpkin Masters.
"After I mastered the easy patterns, I moved up to the hardest patterns
they could throw at me," he writes. "Which at the time was a pattern titled
'If Tiffany had used a pumpkin.'" Now Bennett uses Victorian fretwork
patterns to create intricate original designs of astonishing complexity.
These are not instant effects, however: Some patterns take four eight-hour
days of work to complete.

Still, these pumpkins are monochromatic. You only carve holes where light
shows through, for a sort of woodblock effect. To discover how
limited this method is, you must take a look at the works of Hugh
McMahon, the Michaelangelo of pumpkin carvers. Go ahead, throw away that expensive set of tiny plastic tools. You'll never get close.

McMahon's pumpkins have appeared at the Whitney Museum, the Brooklyn Academy of Music; in Life, People, Mad and Vogue; on "Regis & Kathy Lee," "Late Night With Conan O'Brien," "Good Morning America," "The View" and "Martha Stewart Living" and in restaurants like Four Seasons, the Rainbow Room, American Place, Tavern on the Green and the Hard Rock Cafe. Needless to say, McMahon carves in New York and has a first-rate publicist.

McMahon scrapes at the flesh of the pumpkin to permit gradations of light
to peek through for an almost photographic effect. He specializes in
celebrity portraiture -- including Bill and Hillary, Martha Stewart, Bob
Dylan, Michael Jordan and a Carmen Miranda watermelon -- and he may be our century's answer to John Singer Sargent.

McMahon suggests that one cut a hole in the bottom of the pumpkin, not the top, to help the pumpkin keep its shape. I can imagine arguments erupting across the country about this controversial practice, but in McMahon's defense we must note that there are very few people in
this country who have been paid over $1,000 for one of their
pumpkins. So shut up and do as he says.

You really start to get the idea that the wheels have come off the track when you visit Everything
Halloween. It starts out by asking "if your children are always
complaining that your pumpkin doesn't look as good as the ones across the
street" and sniffs, "No more jack-o'-lanterns with the standard 'triangle
nose and eyes' faces." Now do you feel stupid? Inferior? How can you even
look your children in the face? Of all the pumpkin sites I visited, this
one truly knows how to twist the knife.

Class consciousness begins and ends, however, with the doyenne of
decorating, Martha Stewart. Martha shows us how to decorate pumpkins by punching tiny holes in them and inserting small white Christmas lights. She calls them "magical pumpkin lanterns." You will not see a prissier concept for Halloween decorations. Your kids will probably be beat up every time they leave the house.

But leave it to Martha to deliver the most pragmatic advice of all: "Keep
in mind when planning your Halloween decorations that once a pumpkin is
carved, it will rot more quickly."

In her customarily thorough fashion, Martha also offers an "Ultimate
Pumpkin-Carving Kit" for almost $70, made up of instruction booklet, a
canvas tool holder, keyhole saw, scraper, double melon-ball scooper, chip
carving knife, hole-cutters in three sizes, linoleum-cutter, needle tool,
colored glassine paper for decorating (four colors/two sheets each), six
reusable template designs and two battery-operated mini-lights. It ain't
just for Halloween, either: As the site notes, you can use it "all year
with watermelons, turnips, and squash."

Stepping up to the next level of corporate sponsorship takes us to
international candy conglomerates with a vested interest in Halloween. The
good people at Hershey's offer several pumpkin carving templates and carving tips, including a
pumpkin bearing ... the Hershey's logo. One can only imagine the thrill of
forcing your youngster into carving a series of pumpkins sporting your
favorite corporate logos -- Nike, BMW, Warner Brothers, Archer Daniels
Midland.

Hershey's carving instructions bear the polish that only a top-flight legal
department can lend. Specifically, the last instruction is: "Place a candle
inside your pumpkin. Carefully light it -- and watch your design come to
life! Do not leave a lit candle unattended." My question is: Has there been
an outbreak of porch fires we haven't heard about? Call me a daredevil, but
I'd never thought to make little Johnnie sit chattering on the stoop to
guard his pumpkin.

Nor had I ever considered what our devout evangelical Christian brethren
should do about Halloween, what with its pagan and satanic overtones. Our polite northern neighbors, however, have found a way to apply "hostile love" this season. Paul Naylor, of the Inter-Varsity Christian
Fellowship of Canada, reports the story of a Belleville, Ontario, church
that distributed pumpkins with crosses carved in them. "Amid a sea of
ghosts and vampires, black cats and skeletons, witches and evil grins ...
Christian crosses were shining in the darkness."

Bob Caceres is a freelance writer. He lives in Jamaica Plain, Massachusetts.