Bring me the fat head of Elton John

Young men once fretted over sculpting the future, not whether they were going to get a sweaty power-handshake. What happened? 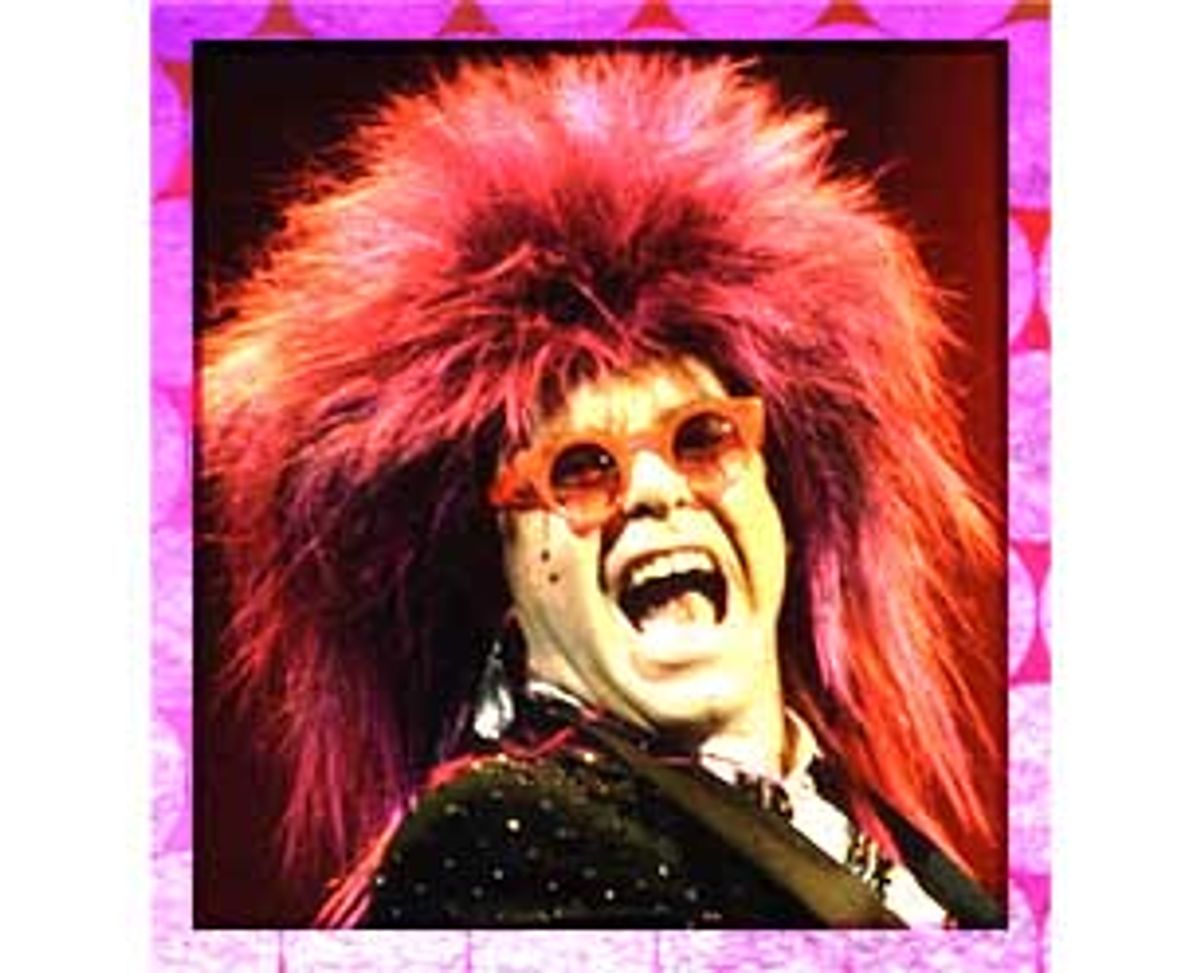 I went to a party for Details magazine the other night, with a friend of mine who is a low-to-mid-level movie star; everybody knows his face, nobody knows his name, and for some reason, only African-Americans are confident that he is a movie star at all. Our black brethren seem to have a much higher memory retention and recognition level for the more obscure celebrities, and a much more magical happiness upon spotting them in the flesh -- who knows why. "Love your work!" shouts the FedEx man, full of sweetness and light as we cross the street. "Thanks very much," mumbles Eddie. White people know Eddie's face but they always think he's someone else.

Eddie is the only reason we got into the party at all -- the ability of my name to spontaneously evaporate from guest lists is truly legendary. The big, fancy black door-guys all recognized him and hurried us importantly into the party (as opposed to making us stand in the long line of "sexy" people who were being forced to wait indefinitely behind the velvet rope, which, presumably, made those unlucky, low, uninvited pedestrian swine passing by the venue positively vomit with envy for the red-hot popularity of the empty room we were about to enter).

It was an impressive set-up: loads of modern lighting, fashion films on the wall, sleek bartenders and caterers running around in crisp Nehru jackets with electric trays. An African-American videographer shined his klieg light on Eddie and began filming us. Eddie happily turned his back on the camera like a Hollywood pro. I copied him. "Vincent Gallo and friend," the caption would probably read, later, in the edited version.

The party was full of tall, pouty, cigarette-thin, saucer-eyed girls with birth dates hovering around 1979, swaddled in rabbit fur coats and cowboy hats, being led around by the elbow by short, squat, loudmouth magazine boys with thick expensive glasses, loud sharkskin ties and boxy suits camouflaging their premature spare tires. Their personalities were all infected with the raw, metallic twang one gets when exclusively cruising for sex or money or connections to one or the other or both. It was kind of horrid and sad, all that young potential and energy, waddling into blind, obedient pursuit of the unthinking commercial pleasures provided by the Corporate Lust & Greed program. All those supposedly "hip," smart and pretty people standing around as anonymous and dead in the face as fly corpses in a lightbox.

The highlight of the evening was a performance by MTV/Viacom-approved performer Moby. Moby, who looks like a bald, sickly version of Howard Jones without the oversized yellow pants, launched into an abrasive, hammering techno-kraut-crushing machine beat and began yelling into his microphone while Windex-blue lights flooded the unfeeling faces of the uninterested, "cool" audience.

Only one short, fat office girl really got down and danced to Moby. Her enthusiasm was distastefully retardataire to the rest of the vodka-sanitized glow-worms, who leaned away from her lest her hardy involvement soil their boredom. The apathy in the room was louder than the fucking band.

It became amazing to me that youth culture ever meant anything. Rock 'n' roll was once an actual movement that people lived for and loved and cared about. Young people once had attention spans long enough to absorb subversive ideas. Young men fretted over sculpting the future and not just whether or not they were going to get a Cohiba cigar and a sweaty power-handshake and some thin pussy that night.

I just finished reading the new Lester Bangs biography, "Let It Blurt," by Jim DeRogatis, which is OK. Any dose of Lester Bangs in the American consciousness is desperately needed. Given the emergency level of how fucked up pop culture is now, anything Lester-related should be considered an antibiotic drip for a horribly infected Zeitgiest.

Sure, Lester was a fat mustachioed drunk who rarely bathed and was dead of pills at 34, but he had enormous care for and belief in the medium of rock 'n' roll and he wallowed in it better than anyone. His pure, screaming blasts of messy feeling are absolutely heartbreaking.

Lester, with hilarious grit and Gonzo grandiloquence, took the twists and turns of rock personally. Nobody seems to feel as much as Lester anymore. Nobody takes up the jousting lance and gets on the white steed and makes a big romantic fool of themselves sloppily loving and hating things with all their meat and blood and personal humiliation, the way he did, anymore. That used to be the job of the artist: heightened sensitivity, feeling life in ruder colors than the rest of the populace. Now success is all about looking stylishly dead, inside and out. It's a flat new world of celebrity insect heroes for a depersonalized culture in service to the corporate hives.

I think that one big reason why nobody cares anymore is that my generation witnessed the hardcore debasement of all of our majestic rock legends by their own liver-spotted hands. Paul McCartney, Stevie Wonder, Sting, Elton John, all of them, upon aging, started spitting up tasteless, runny clots of pre-masticated musical baby-food. These people used to be outrageous; godlike mega-talents, carnally magnificent legends, capable of ripping out billowing streams of raw transcendent emotion! They were the shit!

Then, all of a whiplash-sudden, age and the vast financial rewards of Top 40, adult-contemporary hose-bagging chewed them into fat jingle-writing jerk-offs, triggered by greed. How can any artist, in the span of one lifetime, jump from creating the audio masterpiece "Living for the City" to ejecting the limp, cringe-inducing "Ebony and Ivory"? Paul McCartney was always fairly tasteless when left to his own devices, but how could any human being voluntarily jump from "Helter Skelter" to "Ebony and Ivory"?

"Let's write some hits, Michael," McCartney said to Michael Jackson around 10 years ago. Not songs. "Hits." Result:
"The Girl is Mine." Shudder. How did it happen?!

Elton John! Once the towering, spangled bliss-freak who birthed "Rocket Man," became the soft-hipped CEO who artificially inseminated "The Way You Look Tonight" into the big money airwaves. Sting is the worst offender of them all, having regressed from being the sneeringly poetic pirate boy who howled on "Outlandos d'Amour" to a whimpering purveyor of goddamned Branford Marsalis ultra-lite jacuzzi jazz.

Is it all the ravages of age? Do the years turn everyone into a withered, simpering, pastel Hallmark card of a tired, cynical fuck? Give me the Big Black Pill, mother, if you ever see me exchange my piss and vinegar for cap-toothed, hollow-eyed, Viacom cheerleading. Better to eat dog food at 70. Book me a seat on the Chuck Wagon. Hope I eat them beef-flavored rat briquettes instead of my own words.