Night of the Living DVD

Another classic gets killed by its own "anniversary edition." 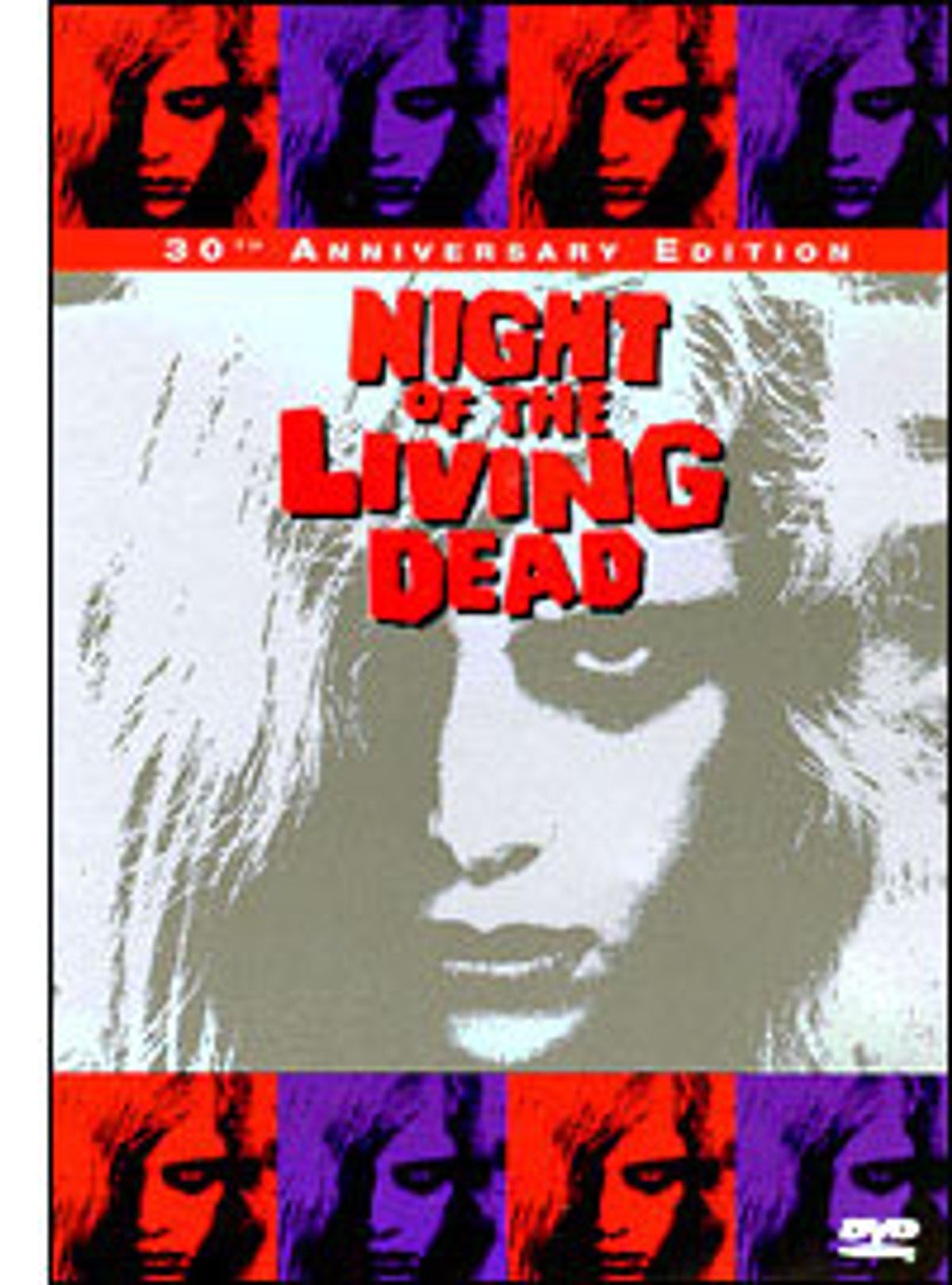 Poor "Night of the Living Dead."

It began as your basic, heartfelt film about six strangers boarded up in a house defending themselves from an atomic plague that makes the dead arise and crave human flesh. OK, so maybe the original concept was a tad convoluted. But its execution and aspirations were humble. Made for $114,000, "Night of the Living Dead" was kinetically shot, frantically edited and sharply acted, co-starring a legion of lurching zombie extras (mostly made up of family, crew members, $600-a-pop investors and the film's stars hiding under goopy makeup). George A. Romero's spare, instinctive direction favored paranoid dread but didn't skimp on the grisly chills either.

When "Night of the Living Dead" was completed in 1967, no one wanted to touch it. Fratricide, matricide and intestinal tug-of-war were not the respected institutions that they are today. To top it all off, "Night" was a black-and-white film during the dawn of color TV. Desperate to make their money back, the filmmakers sold distribution rights to the low-profile Continental Films, and "Night" premiered in its hometown of Pittsburgh on Oct. 2, 1968.

Then it got really, really popular.

The brains behind this Frankensteinian beast are people who really should've known better: director of the new scenes and original co-screenwriter John A. Russo (I have my own ideas of what John's "A" might stand for); original co-producer Russell Streiner (who nabbed "Night's" most famous line, "They're coming to get you, Barbara"); and original cemetery zombie Bill Hinzman. Hinzman, it seems, has taken his delicately nuanced, three-minute portrayal of the rugged-yet-sensitive cemetery zombie (you know, the one who chases Barbara around) and transformed it into a career of fantasy/horror convention-hopping and B-movie directing (the DVD features a clip of his clearly inspired "Flesh Eater: Revenge of the Living Zombie").

Russo, too, has spent the better part of his post-"Night" existence helming movies like "Scream Queens: Naked Christmas" and "Santa Claws." In fact, everyone involved with this new DVD has successfully ridden Romero's coattails all the way to cinematic oblivion. If "honoring" "Night" with this heinous atrocity is some way of getting back at Romero for leaving them in the dust, it sure is a doozy.

My agitation is not unjustified. "Night" is an important film. Released one month before the MPAA ratings board began strangling the industry, "Night" was a visceral culmination of the helplessness, agitation and paranoia that the late '60s specialized in. In the Vietnam War era, America was troubled over its own capacity for violence and dishonesty. The figure of the zombie was the perfect open-ended metaphor for the new domestic threat. You didn't know who they were, where they were or how many there were, only that they were coming at you from all sides, and some of them looked just like you.

"Night" was a purging of authority and self-cannibalization of culture; Romero chewed up taboos the way zombies eat flesh. The black hero is smarter, richer and stronger than his white counterparts. The government is impotent. Brothers eat sisters. Daughters eat parents. This total lack of reverence presents "Night" as catharsis -- but also as a very scary reality. In "Night of the Living Dead," we are all equal zombie fodder.

When Romero sold "Night," he failed to protect quality standards; the last 30 years of late-night television have been haunted by videotape dubs of videotape dubs of film prints originally made on old, out-of-date, mismatched film stock. This led to tapes that were grainy, scratched, out of sync and often missing entire scenes (compliments of Joe TV Producer's cavalier amputations). Put on heavy rotation like a sinew-slurping "It's a Wonderful Life," "Night" remained the late-night blue-plate special.

It is only in the last 10 years that "Night's" impact on independent filmmakers has been acknowledged. This has resulted in better and better video releases. Not surprisingly, the digitally remastered "30th Anniversary Edition" DVD looks as sharp as a butcher knife and sounds as clear as a bloodcurdling shriek.

Every other change, though, is ruinous. "Anybody who appreciates the craft of filmmaking will appreciate how the new footage is integrated with the old footage without tampering with the content of the original film at all," Russo says on the DVD commentary. Perhaps Russo has confused "content" with "plot." True, the plot of "Night" goes largely unchanged. The content of any film, however, exists between the script lines, and that is exactly where Russo unleashes his kamikaze editing style.

Feeling a bizarre compulsion to keep the movie at exactly 96 minutes (after all of the other indignities, why honor the running time?), Russo kills the major dialogue scenes of Barbara, Harry and Helen, reducing all three characters to mere plot-pushers. Russo forgets that suspense is fueled by stillness as much as it is by action; "quiet" or "slow" moments have been hacked off mercilessly, moments of intimacy slain with insipid abandon.

Russo insists that his new scenes cover "story points that we wished we could've covered 30 years ago." But the showy, vulgar and irrelevant new scenes aren't story points at all; they primarily consist of additional zombies shuffling around sporting gory, '90s-style prosthetics. The original "Night" kicked off with the famous cemetery attack, leaving the protagonists -- and us -- without our bearings for almost an hour. The new "Night" unspools with a back story about Hinzman's cemetery zombie. Turns out, he's a recently executed child-killer set to be buried. Is this as irrelevant as it sounds? Is its primary function to drain the first hour of any suspense or shock? Is its secondary function to illustrate how much weight Hinzman has gained in 30 years? Yes, yes and yes.

The prologue also introduces the new character of the Rev. John Hicks, flagrantly overacted by Scott Vladimir Licina (who also composed the new score). Hicks returns for what Russo describes as the "mindbending epilogue" (the what?), which takes place one year after the film's original (and, evidently, unsatisfactory) ending. It seems that Hicks has survived a zombie bite and claims that God has saved him and that blah blah sinners will be blah blah punished yadda yadda yadda. Is this as irrelevant as it sounds? Does it hammer home themes that Romero, wisely, only hinted at? Once again, yes and yes.

So far, DVD "special editions" (like "Star Wars") have had the distinct whiff of "Mom, watch what I can do!" To recollect Frankenstein again, the question filmmakers should be posing to themselves is not "Can I play God?" but "Should I play God?" "Night" is such a quintessential product of its time that even one of the details out of place -- the new synthesizer soundtrack, the not-quite-matching new shots, the contemporary phrase "You wish!" -- could alone have brought the entire cinematic construct crashing down. Every weak spot is highlighted by its sudden lack of coherence. At odds with the music, the acting is suddenly amateurish. At odds with the new special effects, the old effects are suddenly cheesy.

In Entertainment Weekly, Romero responded to the idea of new scenes by saying, "I [don't] want to touch 'Night of the Living Dead.'" That should have been the end of it. Instead, Russo took advantage of an old agreement with Romero that gave them both the right to do with "Night" as they pleased, and has thus condemned himself to the same hell occupied by the likes of those who transplanted Fred Astaire into vacuum-cleaner commercials. Compounding the insult, the DVD is crowded with excessive Russo and Hinzman self-promotion, and the new scenes appear to be in support of a semi-sequel they are concocting entitled "Children of the Dead."

That the "Night of the Living Dead: 30th Anniversary Edition" will never catch on is some consolation. This practice of tampering with classics, though, may continue, and that should truly send chills down your spine. After seeing her work in the new scenes, actress Debbie Rochon asked Russo, "Now can you do me just one more favor? Can you put me in 'Casablanca'?"

Bogie's on the run from an army of gore-dripping flesh eaters, and Ingrid raises both of her spurting, bloody stumps to wave her final good-bye.

Can't you just picture it?