Please, God, don't let him be a penis grabber

Then again, if he is a penis grabber, keep him away from mine. 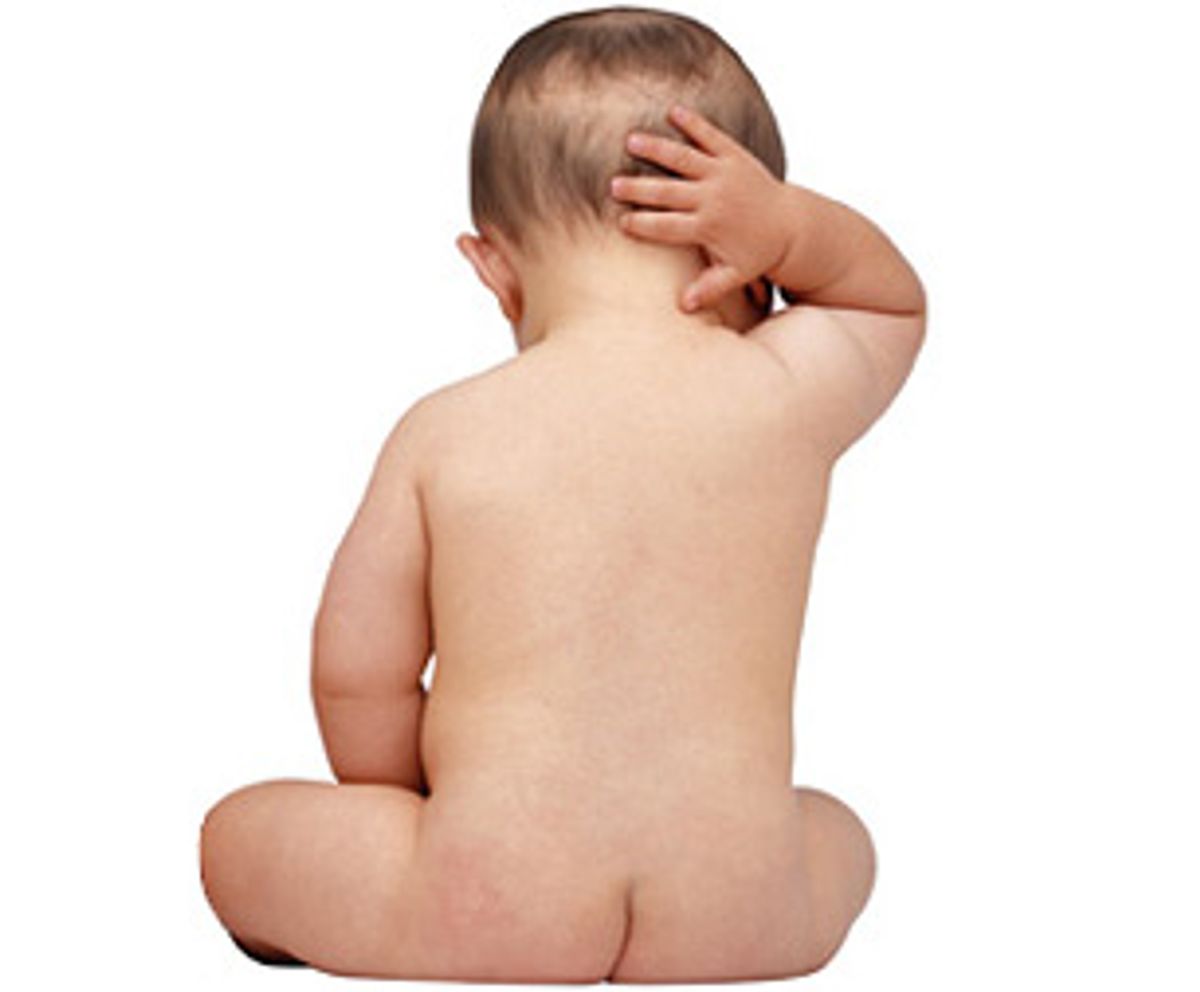 After 18 months on the planet, Max has discovered his penis. This is a good thing. It's a nice penis, and it's his, so I want him to feel good about it. It's in the right place, and hopefully the two of them will share many happy years of socially appropriate activities together. But after spending numerous mornings as a parent assistant in my daughter's preschool class, I admit to the disturbing fear that he will become a penis grabber.

They are perfectly nice boys, these penis grabbers, but they demonstrate a single-minded devotion to their little pals that cannot help but hamper their development in other critical areas, such as not grabbing their penises. When first confronted with this phenomenon, I assumed that these newly potty-trained boy geniuses were merely trying to tell whomever was watching that they had to go. But nobody has to go that much. They just naturally gravitate there when they have a free hand, and they always have a free hand. Some of them seem to have six or eight free hands.

Penis grabbers present enlightened parents with a bit of a quandary: One wants to allow one's child the freedom to explore his anatomy to the best of his ability; but one doesn't want him to feel so free that he believes it is OK to try the same stuff with anyone else's anatomy.

When you consider how much attention the parents of newborn boys devote to the little guy's little guy, perhaps penis grabbers are only following our lead. I speak of course of the circumcision decision. As with just about every other parenting decision, what was once a no-brainer now involves something along the lines of the Lincoln-Douglas debates.

Even being Jewish no longer is a complete out. My cousin and his non-Jewish wife went back and forth on the issue so often that when they finally came down on the snip side, they had apparently so confused the doctor in question that he did a less than complete job. Circumcision lite, we call it.

For Jewish parents of my parents' generation, circumcision was an excuse for a party. To the delight of my older sisters, I was brought into the room on a silver platter and de-foreskinned in a manner not unlike that of a flank steak in a Benihana restaurant.

The bris, as the ceremony is known, seems to me an uncharacteristically cruel chapter in the otherwise noble tradition of Judaism. Here you've gone through the trauma of being born -- essentially going from being a fish to a mammal in a matter of hours -- then eight days later, just when you're starting to think that maybe this place might be OK after all, they come after your goodies with a Ginsu.

Needless to say, Max was spared a bris. He was circumcised at the hospital in the usual way. We didn't even save his foreskin, mainly because 1) that would be gross and 2) I was afraid at some point he might want it back. I once got a newsletter from an anti-circumcision group called the National Organization to Halt the Routine Mutilation of Men (NOHARMM). These bright lights traced every failure in their failure-laden lives to the removal of their foreskins, and actually offer advice on foreskin replacement, which is about as welcome as advice on how to remove your own spleen with a twisty straw.

Then the other day it happened. I stepped out of the shower and there he was, eyes wide and finger pointed, laser-like at, quite literally, the daddy of all penises. Now women will take great pains to convince the men in their lives that size doesn't matter, but I fear Max was suddenly gripped by his first brush with penis envy.

Yes, it looked like his I suppose, but I shudder to think what was going through his tiny mind at the moment he realized that, by his own weenie standard, I had a foot-long and he had a pig with no blanket.

I couldn't remember what the books said about this particular developmental moment. He clearly wanted to take a moment to gauge its length, width, distinguishing characteristics and kinetic capabilities, but that prospect gave me the, pardon the expression, willies. I'm generally open-minded and encouraging of childhood exploration, but this went beyond my ability to cope. I found myself, for the first time in my life, wishing I had Dr. Ruth's 800 number.

So I did what I thought any intelligent, forward-thinking father would do: I hid. I wrapped myself in a towel and offered him some raisins, the only thing I knew he'd find more appealing -- and wrinkled -- than my dick. And now when I change his diaper and he goes for his wee-wee like it's a winning Powerball ticket, I am at ease.

At least he's not going for mine.