Samantha Morton, the best actress to emerge in the last decade, finds a film deserving of her talents. 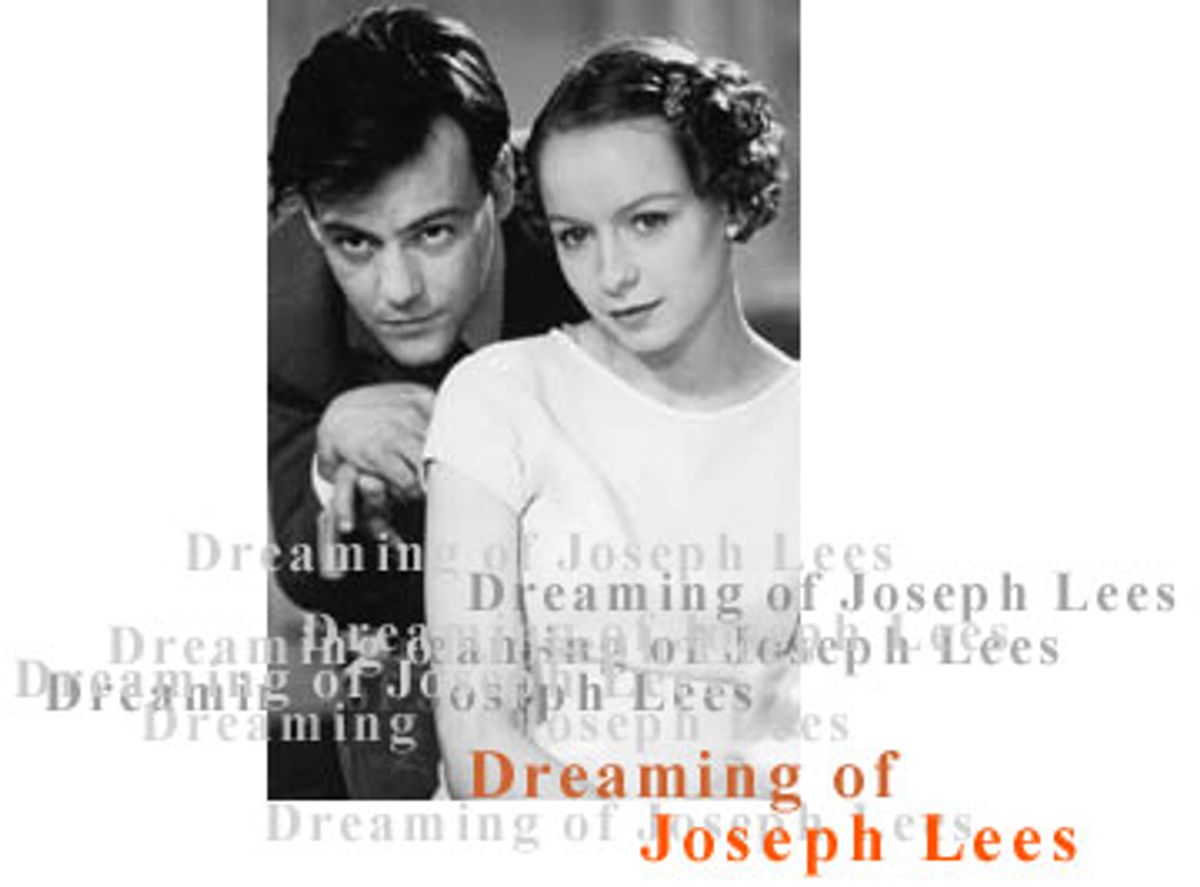 In "Dreaming of Joseph Lees" the phenomenal young British actress
Samantha Morton combines romantic dreaminess and sexual hunger in a
way that's uniquely hers. There's a will of steel beneath her tremulous
surface; she's fierce and vulnerable at the same time. In one scene a drawing
teacher (Miriam Margoyles) announces to her class that the female brain is
like the female form: soft, changeable. Applied to Morton, that statement is
half right -- and half dead-wrong.

In last year's "Under the Skin," as a young woman whose mother's death
sends her on a destructive sexual odyssey, Morton made one of the most
remarkable movie acting debuts ever. She seemed utterly contemporary.
Here, in a period film set in rural England, she's no less immediate. You
don't catch Morton feeling her way into the character of Eva. From the
opening shot of Eva alone in her bedroom lost in a daydream, Morton
seems completely submerged in the role. With her curly bob and long
woolen skirts and sweaters, Morton could have stepped out of Life
magazine. But the way she's tuned into Eva's interior life dispels any phony
nostalgia.

When a title announces we're in 1958 it has an almost Brechtian effect.
From the look of Eva's Somerset village it might be 1938. The only glimmer
she's ever gotten that life could hold something beyond her job as a secretary
in a sawmill or (eventually -- inevitably) marriage came in a long-ago visit
from her second cousin Joseph Lees (Rupert Graves). A geologist whose job
took him traveling the world, who loved art and books, Joseph became a
romantic figure for Eva, and remained so even though her family lost touch
with him after he lost his leg in an accident.

Only her weekly drawing classes give her any sense of the world Joseph opened to her.
But Eva is too starved for physical attention to live entirely in her dreams. And when
Harry (Lee Ross), a local pig farmer, sets his sights on her, Eva finds herself
open to his whispers that she's the only local girl "who's never been to
heaven and back," or to the way he pulls her into an empty schoolroom
after her drawing class to play her Peggy Lee singing "Fever" on his portable
phonograph.

Harry is one of those jolly joes who's got nothing going for
him besides persistence. Not looks -- his prominent nose and jaw seem like
the work of a cartoonist -- and certainly not the same curiosity about the
world that Eva has. But on some level Eva is amused by the way Harry sets
about wooing her, alternately kidding and beseeching, and drawn to the
chance he represents to satisfy her sexual longings. He may be a joker but
he's dead serious about her.

So Eva agrees to move in with him but, refusing to surrender her dreams, won't agree to marry him. The awful thing about watching Eva and Harry together is that they're one of those
complete mismatches that you can foresee surviving for years; she'll
become bitter and tight-lipped over all the ways he's fallen short of her
expectations, and he'll act more outwardly jovial in an attempt to convince
himself everything is fine, all the while becoming more and more needy.
But it's not in Eva's nature to be satisfied with less, and all the desires she's
kept under wraps spring to the surface when she encounters Joseph at a
family wedding.

Along with Sheryl Lee, Morton is probably the best actress to
have emerged in this decade. And like Lee she's absolutely fearless. It's not
so much that these women disdain the idea of protecting themselves -- in
other words, relying on acting shortcuts and tricks -- it's that the idea of
protecting themselves seems never to have occurred to them. Each
performance is a walk into the flames, a willingness to follow their
characters wherever they lead.

Watching Lee or Morton often makes me feel
divided against myself, fearful of what lies in wait for characters so
unprotected, and dumbstruck by the courage they show in opening
themselves up to the extreme emotional states they navigate with such
lyrical clarity.

The conflict Eva faces here -- between duty and desire -- isn't a particularly
novel one. So why does it seem that Morton does stuff the movies have
never seen before? Partly it's the depth and intensity of Morton's
acting, the way every emotion, every reaction seems raw and new. And yet,
as in "Under the Skin," she never loses an actor's control.

Here, there's constant tension between Eva's need to express her emotions and her need
to control them. Everything she's feeling is visible on her face, and, as with
all great interior performances, Morton turns the audience into her
confidante. Even her smiles seem to start on the inside and work their way
out, as if Eva were no longer capable of holding back her delight. That
tension plays throughout the movie -- there's a powerful scene where she's
wracked with sobs while trying to steady her voice and speak -- even in Eva's
sexuality. The script doesn't really explain why Eva decides to live openly
with Harry. But Morton explains it with the unembarrassed blend of
pragmatism and idealism that defines Eva.

But even as I write this I suspect
that explaining what Morton does here is futile. There are some actors who,
when you try to define what they do, only seem more of a mystery, and
Morton is one of them. Rather than diminish her with explanation, I'll say
what's certain about her: She's one of the most emotionally instinctive actors
around, a genius at articulating inchoate emotion, and that the only thing
we can expect from her in the future is to be astonished by her.

Both director Eric Styles and screenwriter Catherine Linstrum are making
their feature debut with "Dreaming of Joseph Lees" (a terrible title), and it's
a clean, solid piece of work. Though the movie is claustrophobic in a way
that I don't find particularly pleasurable, Styles and Linstrum have captured
the gloom and stasis that settled over post-War England. (The film bears
some resemblance to Jim O'Brien's 1989 "The Dressmaker," another period
English drama that featured a trio of coruscating performances from Joan
Plowright, Billie Whitelaw and Jane Horrocks.)

The filmmakers aren't interested in playing to the Merchant-Ivory crowd; they're not out to stoke anybody's anglophilic nostalgia. The autumnal colors (the movie was shot
by Jimmy Dibling) of the rural setting blend right in with the dinginess of
the domestic interiors. It's a world that seems incapable of change and yet
you can see that it has to.

The movie feels a little unpopulated, possibly because Linstrum's script feels
somewhat underdeveloped, and it's grimly humorless, possibly because it's
a Gothic. But Styles does fine work with the actors. As Joseph, Rupert Graves
has lost the puppyish look that hung about him ever since "A Room With a
View"; this is the first time he's seemed to be an adult. He's very good,
particularly in the scenes where Joseph is trying to woo Eva while holding
himself apart from the stifling family atmosphere he's escaped.

You see what he had to escape when he's embarrassed by an aunt fawning over the
"courage" he showed after his accident. As Eva's younger sister Janie, little
Lauren Henderson suggests one of those people for whom being a kid is
nothing more than a physical condition. She's grounded beyond her years,
and her relationship with Morton suggests the way Eva depends on this
young girl.

Lee Ross, as Harry, has a particularly tricky role. Mostly, Ross is excellent,
conveying the lumpy ardor Harry uses to win Eva, and showing how
Harry's honest gracelessness makes him feel inadequate when Eva starts to
lose interest in him. The depths to which Harry's neediness drives him is
frightening. But Ross' performance suffers the most from the movie's
shifting into the mechanics of suspense in the last section. Styles intercuts
one too many shots of Harry brooding malevolently with scenes of Eva and
Joseph together, and the portents become heavy-handed, obvious. Through
no fault of Ross', we lose sympathy for Harry, begin dreading his
appearances, in a way that we wouldn't if Styles and Linstrum had
compressed the final section.

Somewhere along the way, the filmmakers must have realized that the
logical conclusion wouldn't be the satisfying one. That they've opted for the
latter shows good sense, a consideration for the audience as well as for their
characters and cast. When an actress takes the chances Morton does here,
sending Eva off to do her duty would have been just about the most
churlish thing imaginable. The filmmakers who use Morton (and she stars
next in Woody Allen's "Sweet & Lowdown" and in the film adaptation of
Denis Johnson's "Jesus' Son") are going to have to prove themselves worthy
of her, as Styles does. Otherwise, they're going to end up toast.