A massive tome on the silent era's greatest performers fails to come up with much that's fresh. 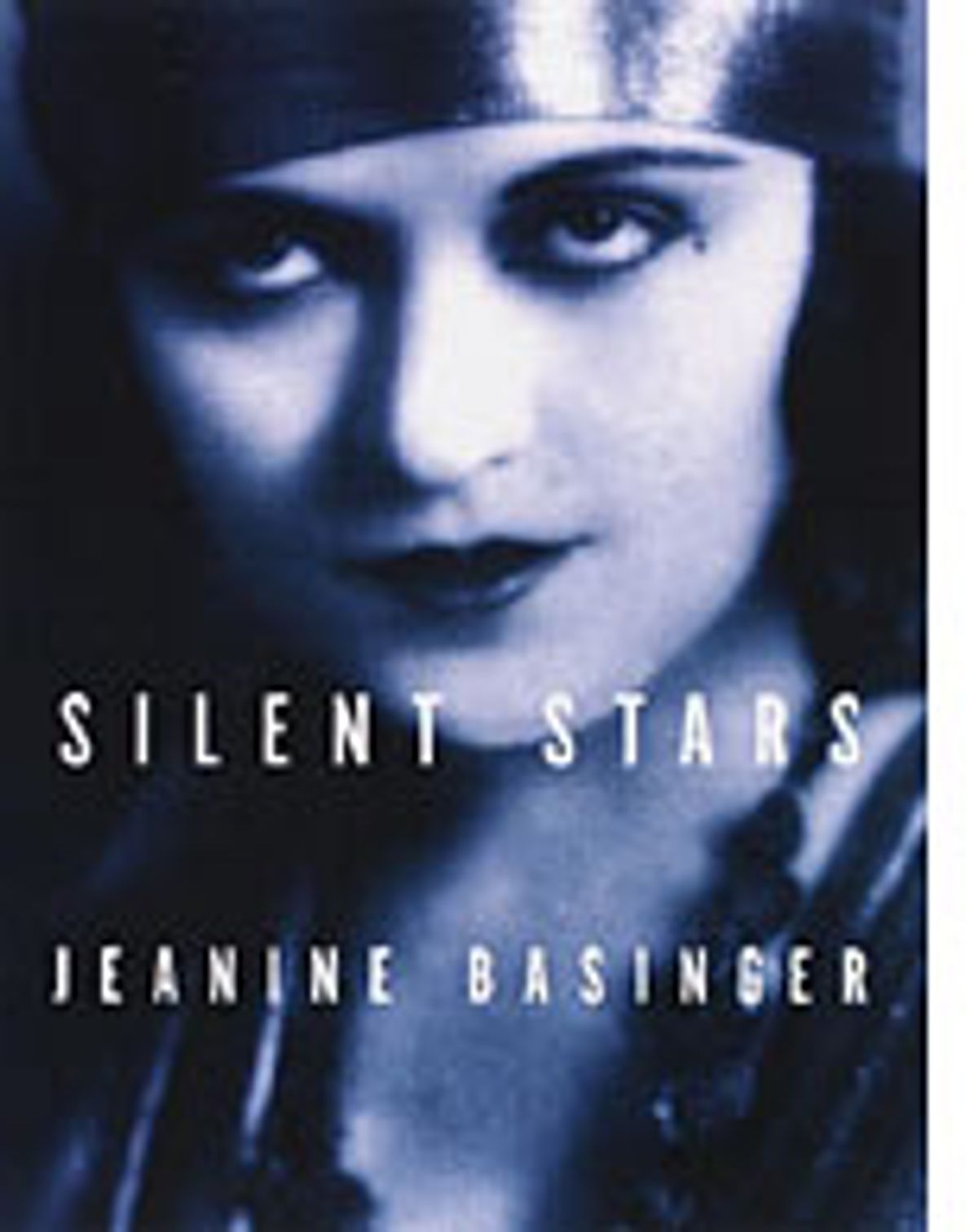 The heyday of silent movies began in 1915, when D.W. Griffith released "The Birth of a Nation"; not quite a decade and a half later they were shoved into an early grave by the invention of talkies. Watching them now, you enter a coded, embroidered world that feels as remote as the Middle Ages. It's easy for a novice to get discombobulated -- as a college freshman, I wandered into a screening of Griffith's great "Intolerance" and was so thrown by the rhythms that I fled, dazed, at intermission.

At the outset of her nearly 500-page volume, "Silent Stars," Jeanine Basinger, a much-published scholar who teaches film at Wesleyan University, attempts to define the world of the silent screen, where

stars look rounder. Their faces aren't shadowed or hawkish, with razor-sharp cheekbones, but romantic and soft, with apparently no bones at all  The women are often barely five feet tall, and the men are short, compact, and well proportioned  It's an Ur-world, full of strong emotion, and you seem to be constantly sharing lives in secret ways, looking on at secret moments, watching scenes of deeply felt and hyper-expressive revelation.

This is a promising beginning, but the book -- a selective yet varied series of portraits of the silent-movie personalities Basinger believes have been either forgotten or misunderstood -- is a major disappointment. Basinger isn't gifted at describing what actors do: She includes an array of details about performance after performance, but there's no lyricism to float these details into evocation, and there are surprisingly few ideas to ground what start to feel like interminable summaries. After 20 pages on Gloria Swanson, for example, all you've gleaned is that most of her movies were built around her costumes, yet somehow she was more than just a clotheshorse.

A study of the horror-movie chameleon Lon Chaney culminates in these unhelpful sentences: "What, after all, was Chaney's appeal? The answer is simple: he was unique." A chapter on Rudolph Valentino, the most parodied (and, to Basinger's mind, the most underrated) of the era's male romantic stars, includes this distillation of the 1921 film that made him a star: "So what was it about Valentino in 'Four Horsemen [of the Apocalypse]'? The answer is simple: as Julio, he has star power, though not much else." In a dual examination of the careers of the flapper heroines Colleen Moore and Clara Bow, we're met with the startling revelation that actors aren't always the characters they portray on the screen.

Basinger is such a ham-handed writer that somewhere in the middle of the book I began to suspect she might have something valuable to express about these performers but just couldn't get it out. I kept stumbling over bizarre sentences ("Norma Talmadge is the proof of the basic fact about stardom: clearly in her case, you had to be there"; "[Pola Negri's 'Passion'] combines historical sweep with intimate portraiture, and there is no overestimating what having a good director can do for the historical reevaluation of an actress's career") and wondering what she might have been trying to say. Sometimes she contradicts herself -- she lists all the customary reasons for the disintegration of John Gilbert's career as Hollywood's great lover, refutes each one, then claims the real cause was a combination of them all. At other times she makes comments that are so far off track you can't believe she meant them -- e.g., that Lillian Gish is "somewhat sexless" (has she seen "The Scarlet Letter"?), that John Barrymore was a proto-Method actor (the style of matinee idols like Barrymore was precisely what Method actors were breaking away from).

Some of the anecdotes she tosses into her discussions of the stars are fun. I enjoyed learning that Colleen Moore and not Louise Brooks pioneered the Dutch Boy bob, and that the plot of Warren Beatty's "Bulworth" has its origins in a 1916 Douglas Fairbanks comedy called "Flirting with Fate." But only a single chapter in "Silent Stars" is the lark the whole book should have been: the one on the canine star Rin-Tin-Tin and his rivals. Here Basinger locates exactly the right tone, a mix of admiration and humor, and her descriptions of the movies illustrate clearly delineated points.

This is truly original research: No one has written seriously about animal performers, and though Basinger 's project throughout is to resurrect the shoddily reported careers of her other subjects, the fact is that other scholars before her have praised Mabel Normand (perhaps more than she deserves), Chaney, Fairbanks, Valentino. It's been nearly three decades since Pauline Kael, in "The Citizen Kane Book," set the record straight on the distinction between the talented comedian Marion Davies and the fictional character Orson Welles and Herman Mankiewicz cruelly modeled on her; and there's nothing in Basinger's chapter on Mary Pickford that Eileen Whitfield didn't cover in far greater depth in her brilliant biography, "Pickford: The Woman Who Made Hollywood." But, silent-movie lover though I am, I didn't know a damn thing about Rin-Tin-Tin.

Steve Vineberg teaches theater and film at Holy Cross College and writes regularly about both for the Threepenny Review.