The dearth of cool

Are white hipsters an endangered species? Is sellout just another word for nothing left to lose? 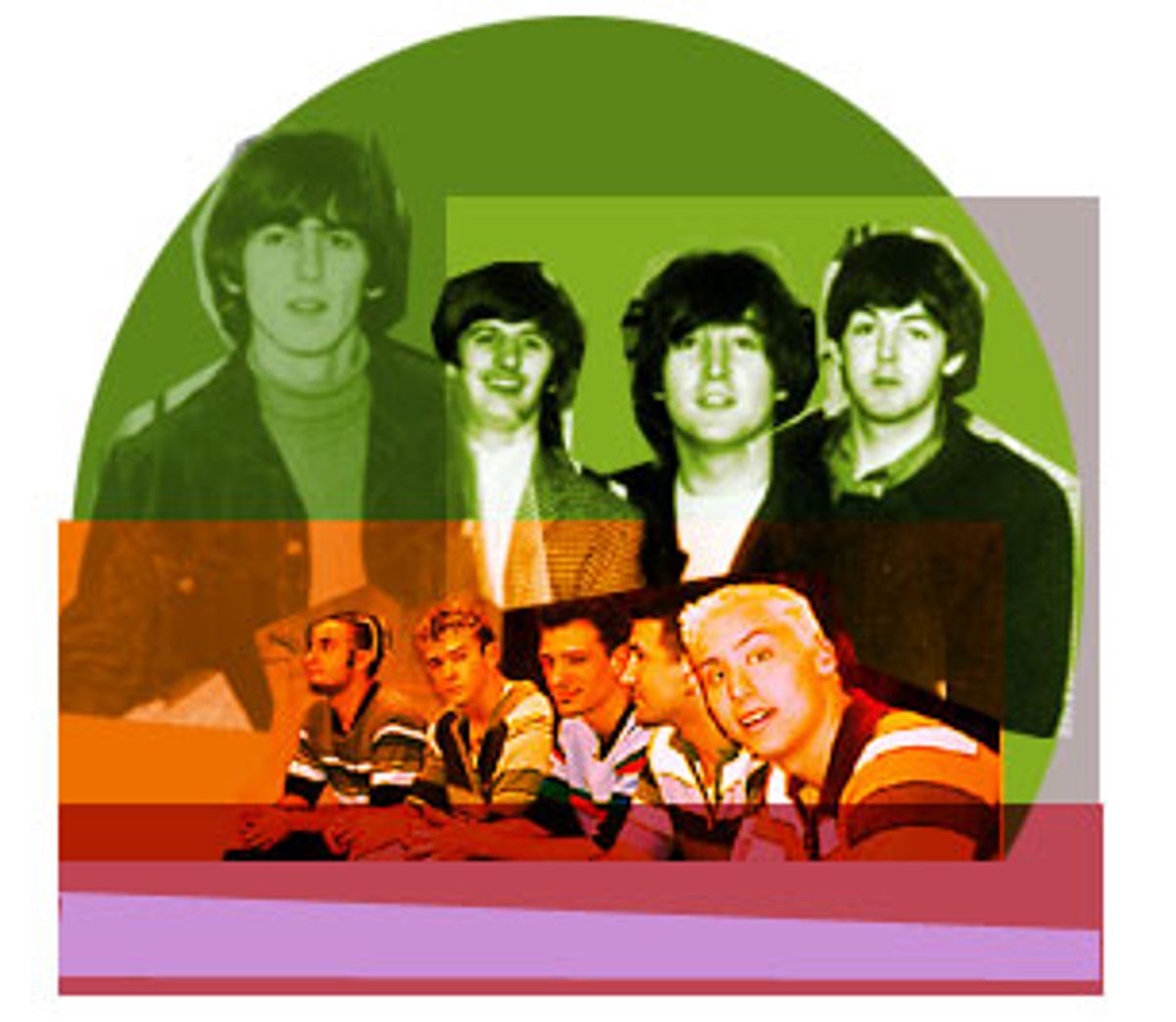 During his opening monologue on MTV's Video Music Awards in September, host Chris Rock surveyed the audience and asked, "Where are all the cool white guys?" Throughout the night, Rock could savor the accumulating evidence for his assertion that they were, in fact, missing in droves. Pretenders to the long tradition of cool white male stars embarrassed themselves on stage or sat in the audience looking like nervous piglets cornered by Rock's wolfishly scathing wit. The sad display reached the pit of inanity when Limp Bizkit's front man, Fred Durst, made lewd references to co-presenter Heather Locklear's breasts. While Durst smirked, a bandmate and fellow would-be homey either pretended to be inebriated or really was stumbling -- and neither scenario was all that entertaining.

Then Madonna took the stage, thank God, to introduce the evening's surprise guest. She called him a talent the likes of which surfaces but a handful of times in a century. Seconds later, when Paul McCartney strutted forward, I was struck by his quiet self-assurance, his apparently secure knowledge that he was all those things the Material Girl had called him. His unimpressed aplomb contrasted neatly with all the young dudes who were so desperate to attract attention. Here at last was a cool white guy.

Ever since Marlon Brando and James Dean taught white men the devil-may-care aspect of cool, when such an attitude was the province of the young, Hollywood and rock 'n' roll have done the proselytizing. Everyone -- or at least those of us with enough time on our hands to care -- can trace their own lineage, and the list is potentially long. But there have been a handful of icons who, through artistry or artfulness, elevated cool to the point of regality -- guys like Brando and Dean, Frank Sinatra, Warren Beatty and, of course, Elvis Presley and countless other musicians from a time when "cool rock star" would have been considered a tautology.

The striking thing about them all is that they achieved a kind of princely dominance by the time they were in their 20s and, importantly, they wore it well. Dean was killed in a car crash at 24; The Voice had his first number one single, "I'll Never Smile Again," at age 25; the presidentially coy Beatty was 24 when he found "Splendor in the Grass" with Natalie Wood; Elvis had them swooning at 20. And now? Thanks to the current demographic appeal of pre-fab teen movies and sanitized pop music, we are being haunted by the ghosts of New Edition and the Brat Pack.

Is there an entertainment industry-wide problem here? Of course not, if you take a financial viewpoint -- the entertainment industry does just fine, thank you. Maybe its finely honed strategy of product positioning leaves little room for iconoclasm. The market's tastes form a bell-curve, and cool anti-heroes have their place -- off to the side of that big bulge in the middle where the innocuous cluster together, where you find the Backstreet Boys, or Garth Brooks, who only pretends to be cool by posing as a rocker. Our oft-lamented media saturation makes celebrities into commodities with the built-in obsolescence of a consumer appliance, but with shelf-lives a fraction as long as, say, a Sony Trinitron.

But what about aesthetics? If you use media prominence as a measuring stick (the discussion is, after all, about icons), it doesn't matter where you look -- television, movies or music -- we are in short supply of young white artists who possess the kind of lasting qualities we attach to the idea of "cool." This has happened before, especially in the cyclical music business, which has produced countless other eras of teeny-bop pop. But many earlier teen idols, the best of whom matured emotionally and artistically -- Sinatra and the Beatles, for example -- only got cooler as they grew up. It's hard to envision the same kind of creative flowering for N'Sync, the boy group that has performed Christopher Cross' "Sailing" in falsetto while suspended like circus acrobats over the audience.

Times like these serve to remind us that cool is a white man's idea of something more purely black, like early rock music. Miles Davis oozed cool. James Brown has it in his bones. Unsurprisingly, then, plenty of hip-hop stars, male and female, exude cool. But what about Lenny Kravitz? He derived his once-cool persona from the same people he mimicked with his music -- Jimi and Jimmy, among others. Kravitz's near-simultaneous release of the song "Fly Away" as a single and in a car commercial -- two videos for the price of one (and tidy revenues on the other) -- was crass enough to lose him what little credibility he might have once possessed.

Older generations of stars have been similarly losing their cool, refuting the idea that the quality might endure mostly as a generational hallmark. Thanks to the endless promotion and recycling of celebrities like Mick Jagger, we see cool can be squandered through overexposure, even by legends. The Rolling Stones and just about all the other great old rockers -- even Lou Reed and Bob Dylan -- have also licensed songs to commercials. "Sellout," once the antithesis of cool, is now just another word for nothing left to lose.

In the hip-hop world, of course, showy materialism can be a cool, in-your-face kind of weapon, but it can't save white rappers like Durst or Eminem. Vanilla Ice may have died so that Kid Rock could live, but in white hands the overall effect is far more strained than self-assured. In the music biz, cool white guys seem to have gone the way of decent rock 'n' roll -- MIA. Back in the grunge days, all of eight years ago, Kurt Cobain was a cool shooting star, too conflicted to endure. Eddie Vedder faded quickly, defensively stammering on MTV's 1998 "Year in Rock" that he didn't want to become a "blockage" in the music industry's intestines. Billy Corgan lost his cool when he started hulking around like Uncle Fester. We do have Beck, but he's a '90s kind of hero: ironic, a techno-fetishist dressed up like a hipster. (But hey, he can dance like one, and that is cool.) Radiohead's Thom Yorke heads up a cool white band, but Yorke so pouted his way through their recent documentary, "Meeting People Is Easy," he became a poster boy for the perils, not the pleasures, of stardom.

It's been a while since a young and dangerous white male actor has been seen in Hollywood, now that Leonardo DiCaprio, 25, seems to have left town. Vanity Fair may have been in a hurry to confer royal status on Matthew "Naked Bongo Man" McConaughey years ago, but he hasn't seemed cool since he played Wooderson, the high school graduate still making the old scene in "Dazed and Confused," in 1993. ("That's what I like about these high school girls," Wooderson boasts. "I keep getting older, they stay the same age.") Nicolas Cage, who wasn't even 20 when he played Randy in "Valley Girl," is threatening to turn into a Stallone-clone action hero before our very eyes. Johnny Depp (24 when he arrived at "21 Jump Street"), like Cage, is well into his 30s now. Sean Penn, who was 21 in "Taps," will be 40 next year.

What about James Van Der Beek, whose head, up close, is said to resemble a breadbox? I suppose it could be generational snobbery, but to me celebrity cool was once exhibited by young princes, whereas Van Der Beek and other so-called Generation Next stars have more in common with the annoying college kids of MTV's "Real World." Sure, all the young white celebs display the cockiness and style that can be purchased with megastardom. But true cool is made the old-fashioned way: It's earned, usually with talent.

Our dearth of cool might be a factor behind another recently spotted trend -- the so-called democratization of celebrity. Or it might be the subject of a sad, closing chapter in "The Lost Art of Immortality"
-- a sense of living large that the creative geniuses of this century inherited from the Romantics.

A more optimistic viewpoint is that with all the cacophony (white noise?) built into the modern infotainment apparatus, it takes longer for the real stars -- the cool ones -- to emerge. With so many white males in the industry these days, maybe the young ones have to let their voices deepen before they can be heard above the din. Just look at Edward Norton, an Academy Award nominee who just turned 30. He's appeared in just a half-dozen films, and he has been a cool chameleon in almost all of them. And besides, Paul Newman didn't land his first big film role until he was 31, when he played boxer Rocky Graziano in "Somebody Up There Likes Me." By 42, he was "Cool Hand Luke."