Dartmouth Greeks tried to improve their reputation with a non-offensive Hawaiian luau. The leis never even made it off the rack. 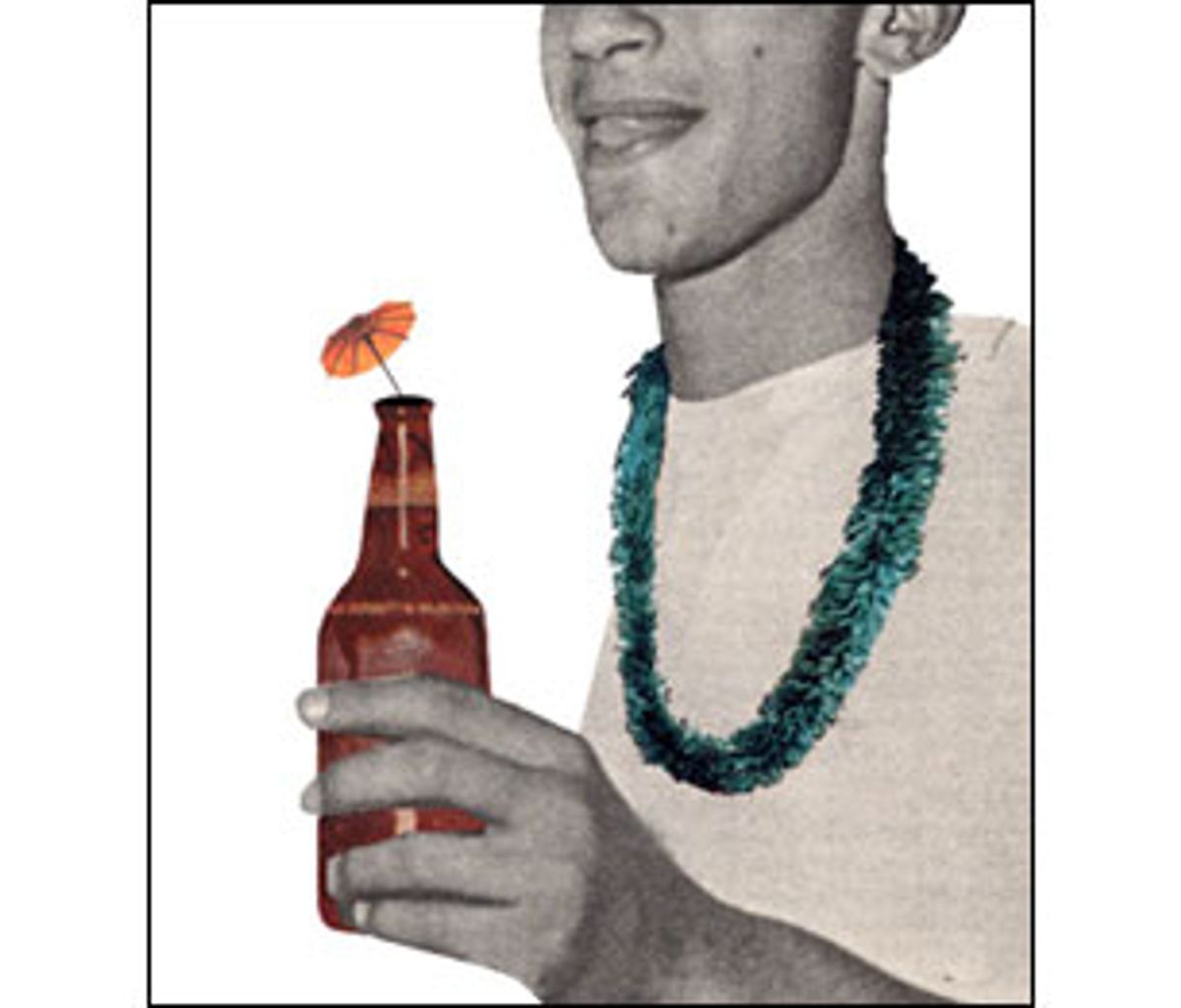 What could be more fun, reasoned some young Dartmouth
fraternity brothers, than hosting a big party and
having everyone dress up like poor black people?
We'll play lots of rap and hip-hop music, they
decided. We'll tell our guests to "dress ghetto."
News of the party sent Dartmouth undergrads scurrying
for Afro wigs, toy handguns and crimping irons.

Ten months and several protests later, Dartmouth is still trying to live down the now-infamous "ghetto party" with promises of greater cultural sensitivity and more aggressive outreach programs. Fraternities and school officials offered heartfelt apologies and
promises to do better. Everyone agreed on Step 1: no more ghetto parties. From now on, only happy, non-offensive theme parties -- a festive Hawaiian luau, for instance.

That's precisely what the brothers of Alpha Chi Alpha and the
sisters of Delta Delta Delta thought they were co-hosting in August -- a harmless end-of-summer bash. But hours after the e-mail invitation went out, the Dartmouth campus was again in an uproar.

Aaron -Aina Akamu, the president of the school's Hawaii club, had e-mailed out a note of protest, saying that calling the party a "luau" was offensive to him as a native Hawaiian. A traditional Hawaiian luau, he later argued, is a ceremony with a long history and deep cultural and religious significance. Alpha Chi's "luau," on the other hand -- with its promises of Jello shots and scorpion bowls aplenty -- had nothing at all to do with Hawaii, and everything to do with a bunch of frat guys getting together to get drunk.

Ordinarily, a few complaints about an offensive frat party would have barely raised an eyebrow on campus. This was, after all, Dartmouth, the inspiration for
the film "Animal House" -- a campus where stories of fraternity brothers receiving oral sex from dogs and fondling a fellow pledge dressed as a bloody, post-mastectomy woman have become an integral part of Greek lore. What's more, these so-called luaus have been thrown at schools across the country for years.

"I thought someone was joking with us," said Alpha Chi summer president Eric Kelley about Akamu's e-mail. It was no joke -- the presidents from both the fraternity and the sorority met with Akamu later that night and agreed to cancel the party. Two hours
after that, the presidents sent out a formal apology campuswide for "any disrespect and harm our actions caused."

The speedy response, many claim, had little to do with
concerns over cultural sensitivity. Following Dartmouth president James Wright's
announcement last February of plans to reform the Greek system -- a plan which includes making all the houses coed -- many houses on campus are doing everything in their power
to avoid anything that smells even remotely of trouble. While many fraternity and sorority
members worry about the future of Dartmouth's Greek system, others at Dartmouth are seizing this opportunity to reform what many describe as a racially hostile environment.

Dartmouth's recent history suggests the fraternity and sorority members have plenty to worry about. In November, the ghetto-party incident drew more than 400 protesters to the university commons. In December, a fraternity-hosted "Miami" party -- which invited guests to dress as Cubans -- angered members of the Latino fraternity, Lambda Upsilon Lambda. On Columbus Day, Native Americans protesting the holiday were heckled by rowdy, drunk onlookers. And at homecoming, a fraternity sold "Yale sucks" T-shirts that depicted a bulldog performing oral sex on an Indian.

The Alpha Chi Alpha party, according to summer president Eric Kelley, wasn't meant to be controversial at all. "People were going to dress up in flowered shirts, we'd get some leis, play some tropical music and have mixed drinks and appetizers," he said.

The problem started when a social chair from the co-hosting sorority e-mailed her sisters asking for help with the event. The e-mail message included an invitation to dress
up "hawaiian style," along with somewhat puzzling references to "pinatas" and "volleyball with those teekee lamps." An idea to have an "american flag jello thing" was also floated in the message; that particular idea -- a patriotic tribute consisting of red, white and blue jello shots in the shape of an American flag -- had been initially suggested for the group's Fourth of July barbecue. "It's not 7/4," the message read, "but hell, hawaii is a state!"

The message found its way to Akamu, who sent it to his friend Omar Rashid, president of Lambda Upsilon Lambda. Rashid, in turn, composed his own e-mail and sent it off to the Coed Fraternity Sorority Council, the Greek system's governing body on campus.
Rashid's message was much angrier, calling the party racist and bigoted, and he threatened to pull his own fraternity out of the CFSC if action was not taken against the two sponsoring houses.

That evening, tri-Delta president Alexandra Sophocles called Akamu. "We went for a really long walk and talked for about an hour and a half," he recalls. "I could tell she was really sorry about what happened, and wanted to do something to try to make things right."

Later that night, Sophocles and Akamu met with Alpha Chi president Kelley and the social chairs of the two houses. At 5:02 a.m., a campuswide e-mail went out apologizing for the planned party, and the two houses announced plans for a forum "about the misuse
of culture and ethnicity on campus." Another racial incident at Dartmouth had been narrowly averted, it seemed, with all sides leaving happy.

And then the storm started.

When news of the controversy hit the campus and eventually the AP wires, hate mail poured in for Akamu and Rashid. "A lot of people were just swearing at me," says Akamu, who
received more than 300 messages. "There were anonymous e-mails from bogus e-mail accounts saying, You better watch it, You better keep an eye out."

Rashid received similar messages. The controversy sparked a wave of editorials and "letters
to the editor" to the Dartmouth, the campus' daily newspaper, many ridiculing Akamu's assertions and blasting the CFSC for giving in to Rashid's demands.

In the end, Alpha Chi got off scot-free, while the sorority received full sanctions from the CFSC judiciary committee. Rashid blames Dartmouth's long-standing "boys club" traditions -- the college didn't admit women until 1972 -- for the uneven sentencing. "They penalized the sorority and not the fraternity," he says, "because all the frat guys have each others' backs."

Largely lost in all the late-night sessions, online debates and irate editorials was the issue at the very heart of the controversy -- namely, why were people
so offended by what was, in Dartmouth Review editor Steven
Menashi's words, a "silly" and "harmless" frat party?

In fact, much of the confusion about the incident stemmed from the party announcement's ambiguous text. What does "dress up hawaiian style" mean, exactly? Menashi insisted that "hawaiian style" didn't mean dressing up like Hawaiians at all -- no grass skirts, no coconut bras -- but rather, dressing like "silly-looking American tourists with floral shirts
and straw hats." Either way, the implication of dressing up "hawaiian style" meant wearing something a little goofy.

"It's because these stereotypes [are] all they know about Hawaii," says Akamu. "They actually think that's real, so they don't see what's wrong with it."

While the prospect of his home being used as a goofy theme for a fraternity costume party obviously irked Akamu, it was the "hell, hawaii is a state" comment that really struck a nerve.

For Akamu and many other native Hawaiians, the issue of Hawaiian statehood is
particularly sensitive. Supporters of Hawaiian sovereignty point to the "annexation" of the nation of Hawaii as nothing less than a hostile takeover by U.S. military and business interests, who forcibly dethroned and imprisoned the reigning monarch, Queen Liliuokalani, stole the land and installed pineapple magnate Sanford Dole as president.

Statehood in 1959 was just the final step in the takeover, they say -- albeit a more palatable step at the time, since it meant the local populace would at least gain the rights of U.S. citizens. In 1993, President Clinton signed a bill apologizing for the overthrow, and native Hawaiian groups like Ka Lahui Hawai'i continue the fight to reclaim Hawaii's status as a sovereign nation. And here was the issue of Hawaiian statehood, popping up in a jokey comment about Jello shots?

Like the Hawaiian sovereignty movement, it seems the cultural importance of the luau was news to the party planners. "We were kind of confused because we all knew the commercialized luaus some of us had been to at restaurants and resorts, and that's
what we were basing ours on," says fraternity president Kelley. "We had never even looked into the fact that there are two separate classes of luaus in Hawaii."

Ty Kawika Tengan, a Dartmouth alum and former member of the Hawaii club, explained some of the differences in a recent letter to the college daily. "It is a joyous celebration of a people who are very strong and vibrant," he wrote, "not the echoes of the past which may be conveniently appropriated as a decoration for a frat basement."

But why can't it be both? some wondered. Many argued that the luau had become so commercialized, such a part of American pop culture, that it is just as much Americana as Hawaiiana. That's no excuse, responded Akamu: "I still don't feel that it gives people the right to be ignorant about what a real luau is."

At the end of the day, did anything good come out of the controversy? If nothing else, it did foster some unusual friendships. Akamu and sorority president Alexandra Sophocles became "very, very close, almost best friends" through the incident, says Akamu.
Sophocles agrees that the incident and the resulting fallout brought their small group -- herself, Akamu, Rashid and his brother Ali and student assembly vice president Margaret Kuecker -- much closer together. "By the end of the term, the five of us had no other friends," laughs Sophocles.

And if the five did become social pariahs -- even if only for a summer, and only on one small New Hampshire campus -- Rashid sees the whole experience as a positive step, emblematic of good things to come. "Alexandra stood up in front of all the CFSC members and said, 'Look, what happened was wrong,'" Rashid says, before launching into a spirited defense of, among others, Aaron Akamu, the ghetto-party protesters and James Wright, the university president with the controversial plans to clean up the Greek system
at Dartmouth.

"I guess it sounds corny, but it's because of them that I'm happy to be a Dartmouth student," says Rashid. "Those drunken idiots who go running around the green throwing up and pissing on themselves? They're not Dartmouth."