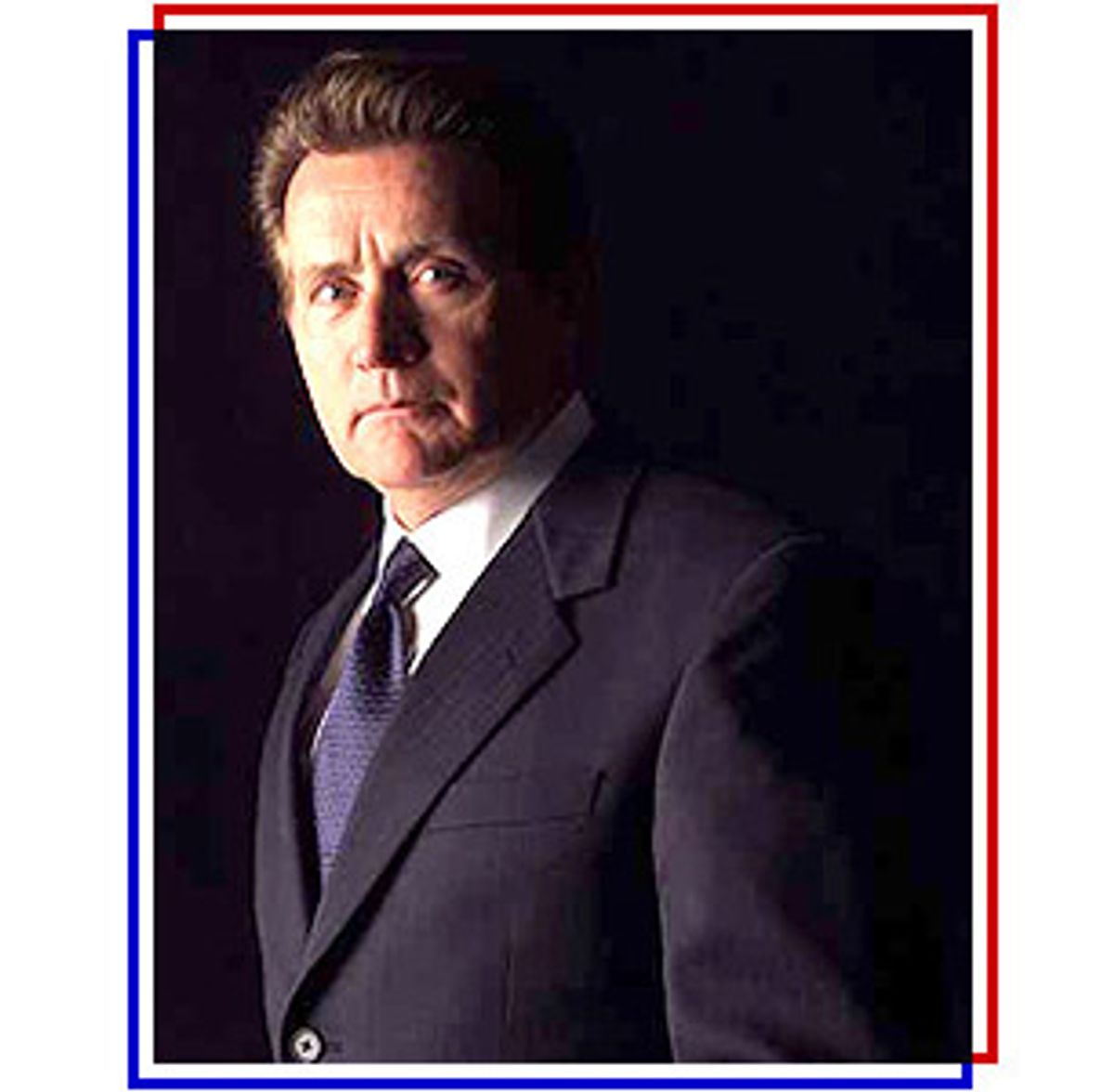 The very idea of "The West Wing," "Sports Night" creator Aaron Sorkin's new NBC drama about a fictional U.S. president and all his men and women, seems a tad naive -- quaint, even. I mean, what made-up version of Washington hi-jinx, political and otherwise, could possibly top the real thing? But "The West Wing" isn't out to top the real thing. Sorkin's ensemble drama, which NBC has picked up for a full season run, takes dramatic liberties of a different kind. It's almost magical in its optimism.

"The West Wing" is a bustling White House-as-workplace drama filled with busy, passionate people having busy, passionate Sorkinesque conversations (surely no one is this cleverly articulate in real life) about political moves that could affect the well-being of the country, if not the entire free world, all the while sprinting through the maze-like corridors of the White House's West Wing. The characters on "West Wing" have important, meaningful jobs that preclude them from having personal lives, but, hey, ask not what your country can do for you. They are proud to serve first-term President Josiah Bartlet (Martin Sheen), a folksy New Hampshire Democrat of founding-father stock. Squeaky clean and decent, Bartlet respects the office, doesn't waffle on the issues and shows no inclination to engage in thong-snapping in windowless corridors. Perhaps as Sorkin's little wish-fulfillment gift to the Hillary-weary, the first lady has yet to be seen. There's a rumor she's played by Stockard Channing.

In Sorkin's half hokey, half sort-of-sweet wonkadelic premise, Washington politics is a hallowed and noble sport, not the vicious Fight Club it actually resembles. There is cynicism and partisanship (the show's not a total fantasy), but it isn't crippling -- President Bartlet (or, rather, his staff) is still strong enough to force compromise and cooperation. The Washington of "The West Wing" is the best Washington it can be, given the times we live in. And just when you're ready to write the show off as a sentimental load, Sorkin snaps out of it and delivers a scene of surprising political -- OK, liberal -- bite.

In the pilot episode, for instance, Bartlet's deputy chief of staff Josh Lyman (Bradley Whitford) and communications director Toby Ziegler (Richard Schiff) are forced to sit down and apologize for an impertinent remark Lyman made to the female leader of a right-wing Christian anti-abortion group during a TV debate. During their meeting, the "Lambs of God" leader and the rotund congressman who champions her aren't satisfied with just an apology; they want concessions from the president, and demand that he endorse the morality legislation they're pushing for.

When Ziegler sharply demurs, the Lambs of God leader makes a veiled antisemitic remark (Ziegler and Lyman are Jewish). Just as things threaten to get uglier, into the room strides Bartlet, booming out the First Commandment ("I am the Lord, your God. Though shalt worship no other God before me") and launching into a rambling story about his 12-year-old granddaughter Annie and the interview she gave to a teen magazine. He seems amiable at first, but then he icily gets to the point: Where in Scripture, he wants to know, does the Lord command his followers to send mutilated rag dolls to girls who express pro-choice opinions in national publications? "Now get your fat asses out of my White House!" thunders Bartlet. They get.

But network realities dictate that "The West Wing" can't be a liberal fiesta all the time (darn!), so, in one episode, doveish Bartlet almost ordered Syria to be bombed back to the Stone Age after a plane carrying his personal physician was shot down. And environmentalists got skewered in a scene in which press secretary C.J. Cregg (Allison Janney) tried, and failed, to keep a straight face through a presentation from a wildlife protection group solemnly asking for a $900 million taxpayer-built highway just for endangered wolves. It's a credit to Sorkin's writing (which is far less annoyingly stagey here than on "Sports Night") that those scenes didn't play like a loss of conviction on the part of the characters or the show. Sorkin does a decent job of conveying the complexities of political issues and decision-making in the real world; nothing is ever black and white.

Not that "The West Wing" doesn't have its mind-blowingly corny side, starting with Snuffy Walden's schmaltzy orchestral theme song that manages to echo both "Fanfare for the Common Man" and the love song from "Titanic." Most episodes so far have been saddled with unbearably cloying President Bartlet speeches that sound like unironic rewrites of candidate Reagan's "morning in America" campaign ads. There are dippy plot developments you can see coming from a mile away -- the minute the president's physician pulled out photos of his newborn daughter and mentioned that he was going on a mercy mission to the Middle East, you knew the poor guy was a goner.

And then there's Sorkin's weird characterization of Bartlet as a capricious cross between JFK (whom Sheen played in a 1983 miniseries), Teddy Roosevelt and Jerry Ford. One minute, Bartlet is all principle, compassion and New England vigor, the POTUS with the mostest; the next, he's riding his bike into a tree or showing up for a staff meeting loopy on pain medication. It's hard to get a handle on Bartlet, and Sheen's wheezy, overexuberant, canned-ham performance doesn't help.

Still, "The West Wing" sucks you in with its swiftly paced multiple story lines ("ER" creator John Wells is an executive producer), awesome cast and (most of the time) piquant and punchy dialogue. Rather than focusing on Bartlet, "The West Wing" is really about the people in his orbit, the ones who whisper in his ear, advise him, humor him and nudge him toward positions they want him to take. As communications director Ziegler sees it, his job is to prevent Bartlet's "demons" from overtaking his "better angels." (I'm sure Ed Meese and Ollie North felt the same way.) But even if you dont work in the Oval Office, the "West Wing" staffers have the kind of career problems you can relate to.

Schiff's fuzzy-bearded Ziegler might be too uncompromising and outspoken for his own good; Bartlet is pissed off at him much of the time. Janney's nurturing yet acerbic Cregg works so hard at being a team player, she has no life outside the office. Whitford's seemingly nonchalant Lyman is really a bundle of nerves consumed with fear about losing his job. Bartlet's haggard chief of staff, Leo McGarry (played by John Spencer from "L.A. Law," who bears a passing resemblance to former Clinton press secretary Mike McCurry -- or, rather, what McCurry might look like today if he hadn't quit when he did), is a recovering alcoholic whose wife has left him because he's married to his job. By throwing a spotlight on the presidential posse, Sorkin makes a point worth remembering next November. Sure, we get to vote for our presidents. But we can only hope they hire the right people.

Watching Sheen's eccentric performance on "The West Wing" and Alan Alda's assured one in his current five-episode guest stint on "ER," you can't help thinking that their roles should have been reversed. Alda would surely make a more even-keeled president. And Sheen's advanced case of windbagitis might work better in Alda's role on "ER"; Alda's supposed to be playing a brilliant emergency medicine trailblazer, but he shuffles around so modestly, he might be mistaken for Marcus Welby.

Alda plays new attending physician Dr. Gabe Lawrence, a former med school mentor of Dr. Kerry Weaver. Lawrence's affable, avuncular manner captivates everybody except for Mark Greene, who sees him as a threat to his turf. Alas, the hints of forgetfulness and brief flashes of sudden bad temper Lawrence displayed in the Oct. 14 and 21 episodes are slated to blossom into some dire condition and ... oh, well, another short-timer bites the dust.

But Alda fits so snugly into the cast and gives the show such a jolt of personality, it's a shame he's going to be pushed out the revolving door. He's in his element here; after all, "ER" is basically "M*A*S*H" stretched out to an hour with a domestic battlefield (the health care crisis) instead of a foreign one. And his Lawrence fills the moral authority void "ER" has had since, well, forever. He'd be a great chief of staff at County General, a central voice of reason, sanity and all that is good and right, much like Capt. Frank Furillo on "Hill Street Blues," Dr. Donald Westphal on "St. Elsewhere" and, OK, Hawkeye Pierce on "M*A*S*H." Oh, how I long to see Lawrence level that smarmy little pretender to the throne, chief of staff Robert Romano, with a withering squint and a lethal dose of sarcasm.

"ER" has always been a bit of a blur, and it's not because of its huge cast or manic pacing. The show has never really let any single character lead; doctors who show ambition, confidence and take-charge attitudes are always being punished and humbled by fate. Which is absurd, because these are doctors, they're supposed to take charge. The show has come into focus around Alda these past couple of weeks, and viewers have sat up and noticed; the ratings, merely great last season, jumped back up to monsterland since Alda has come on board. I, for one, wish he could stay. Or better yet, challenge President Sheen for the Democratic nomination in 2000.