My kids are so loud they go to group speech therapy. 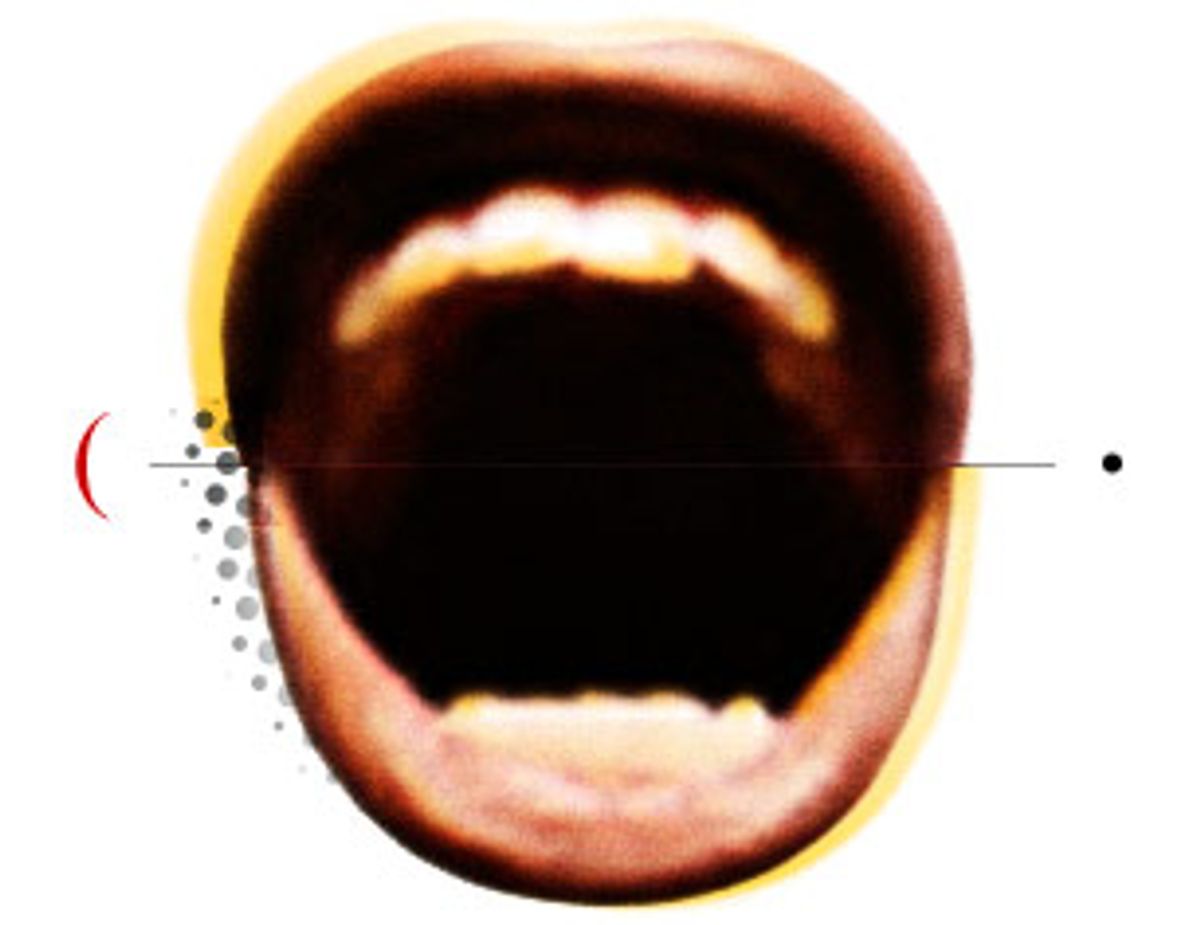 When my little daughter snuggles up to me on the sofa at night to tell me she loves me, the sound of her voice almost ruptures my eardrum. Her twin brother has a yelp that makes my skin crawl. And as for their older brother, he's so loud that, at 10 years old, he sounds like Rocky Balboa right after the big fight.

The ear, nose and throat specialist we finally took him to said he had one of the most advanced cases of vocal nodules he'd ever seen in a kid, and recommended speech therapy on the double. He went on to say that if my son didn't get a grip on his own voice and learn to use it more gently, he'd have to undergo a surgical procedure that would basically sand the nodules off his vocal cords.

So now I go around threatening my kid with an operation if he doesn't pipe down. As threats go, it's not terribly effective. Threatening to take away his TV time works much better.

My brother-in-law calls us "the foghorn family."

"SAM FINISHED OFF ALL THE TOASTED OATMEAL? NO FAIR."

I don't know for sure why my children are so loud, but I think it has something to do with the fact that at any given time, one of them is shrieking to be heard above the other two. My husband and I, however, are not particularly loud; in fact, at least in the case of my husband, the opposite is true. He practically embodies the notion of the soft-spoken, laid-back, contemplative type -- except, of course, when he's really, really pissed. Then he, too, is capable of shaking the rafters.

Unlike my husband, my kids don't seem capable of controlling their voices. Instead, they go from zero to 60 decibels faster than you can say, "Who broke the vase?" They're deafening from the minute they open their sweet little eyes in the morning to the minute they at last, mercifully, close them at night. And it started almost immediately, as in, from the moment that Sam, my firstborn, emerged from the womb, all sticky and tiny and blinking his alien-like eyes. I mean, this was a baby who could scream. Satisfied? He was never satisfied. Content? Why be content when colic is so much more dramatic? By the age of 3, the kid sounded like Humphrey Bogart.

Oh, and did I mention that all my kids, but Sam in particular, tend to be slightly on the anxious side?

Here's an illustration of how annoying it is to live with high-anxiety, high-decibel-level kids: Let's say that I'm in the bathroom, with the door locked behind me, and Sam's on the other side of the door, screaming at me, even though he knows that he is not allowed, under any circumstances, to trail me to the bathroom.

Car trips are nightmares; Thanksgiving dinners painful; "quiet time" an exercise in theater of the absurd. About the only time my kids are, in fact, reasonably quiet (other than when they're sleeping) is when we go to synagogue. Alas, Yom Kippur comes but once a year. Anyway, it's no laughing matter, not really, which was why, after our little visit to the ENT, I finally got my act together and started looking around for a speech therapist for Sam, whose vocal nodules were thickening and coarsening by the minute.

Actually, it wasn't hard to find a good speech therapist because my younger son, Jonathan, was already in speech therapy. He'd started speech therapy the year before because the only person who could understand him was his twin sister, and lately she, too, had been having trouble. The problem was that Jonathan's speech therapist, Miss Lutavia, couldn't fit Sam into her already jam-packed schedule.

Besides, she pointed out, the problems Sam had were global, having to do not only with his own strained vocal apparatus, but with the entire family dynamic. So she called a colleague of hers at the Louisiana State University speech and hearing clinic at the department of communication sciences and disorders and, to make a long story short, Sam was evaluated.

Shortly thereafter, my children embarked on group speech therapy. I am not making this up.

Before they could even begin, I had to fill out a four-page questionnaire about Sam's physical and emotional development including his APGAR score (9.9), his length and weight at birth (20.5 inches and 6 pounds, 4 ounces) and his nursing habits (nonstop). Moreover, I had to answer questions like "Did your child experience ear infections, and, if so, approximately how many? (state year)." As if I could possibly remember. Does he now or did he ever play with matches? (No.) Torture small animals? (Just his brother and sister.) How does he get along with his peers? (Loudly.)

Honestly, sometimes I think there's a vast conspiracy of health-care-related sub-specialists out there whose sole aim is to discover what my husband and I have done to fuck up our children. Group speech therapy is not the first time we've gone down the childhood-imperfection disorders road, no ma'am.

There was the little dance we did with a couple of developmental psychologists the year that Sam was in first grade and his teacher, among other people, noticed that his bottom never actually touched the chair. Sam's now-ex-pediatrician told me that Sam had a hot-zinger case of attention deficit disorder and would be on Ritalin "for the rest of his life." (To date, the kid's never taken anything stronger than children's Tylenol.)

Then there was the educational testing to which we subjected our daughter, when another bright bulb in the education racket informed us that she apparently processed information in a disjointed way typical of children with learning disorders. So off we shlepped to the neuropsychologist for a battery of tests, only to be told, among other things, that Rose "has difficulty attending to a task unless it is something she is interested in," and showed no "evidence of hallucinations, delusions or disordered thinking." Duh.

But group speech therapy at least addresses something real. And OK, so maybe the head honcho at the clinic did sit me down on the first day of group speech therapy and ask me, in a very gentle, non-threatening voice, if I thought that just maybe there might be something in Sam's history or perhaps in our family's past that just might account for what she called his "verbal intensity." You mean in addition to the regular beatings his father gives him? Just kidding. "The cords on his neck stand out whenever he speaks," she said, "indicating extreme tension and anxiety." Gee, now you tell me.

The kid's loud, OK? That's why we're in group speech therapy to begin with. Or, in the words of the report: "Therapy should focus on the reduction of high-intensity talking, yelling and screaming. Also, Sam should begin to develop self-monitoring skills with respect to vocal intensity, particularly while interacting with his siblings. Inclusion of his brother and sister in the therapy sessions will facilitate transfer of these self-monitoring skills to the home environment."

This is how it works: The kids go into a room together with their speech therapist and ascribe numerical values -- "1" for whisper all the way through "5" for screaming -- to each other's tone of voice. When they come out, they're covered with stickers.

The real fun begins the rest of the time -- the approximately way-too-many hours a week when they're neither in group speech therapy nor at school, but at home, torturing each other. It is during these hours that I am supposed to track their vocal behaviors daily, rating them by frequency and logging them onto a little graph. Among the behaviors that I am supposed to track:

Jennifer Moses is the author of "Food and Whine: Confessions of an End of the Millennium Mom"(Simon & Schuster.)