Getting smart, the stupid Web way

AltaVista's new marketing campaign says smart is the new sexy. So why is the search engine coming off so dumb? 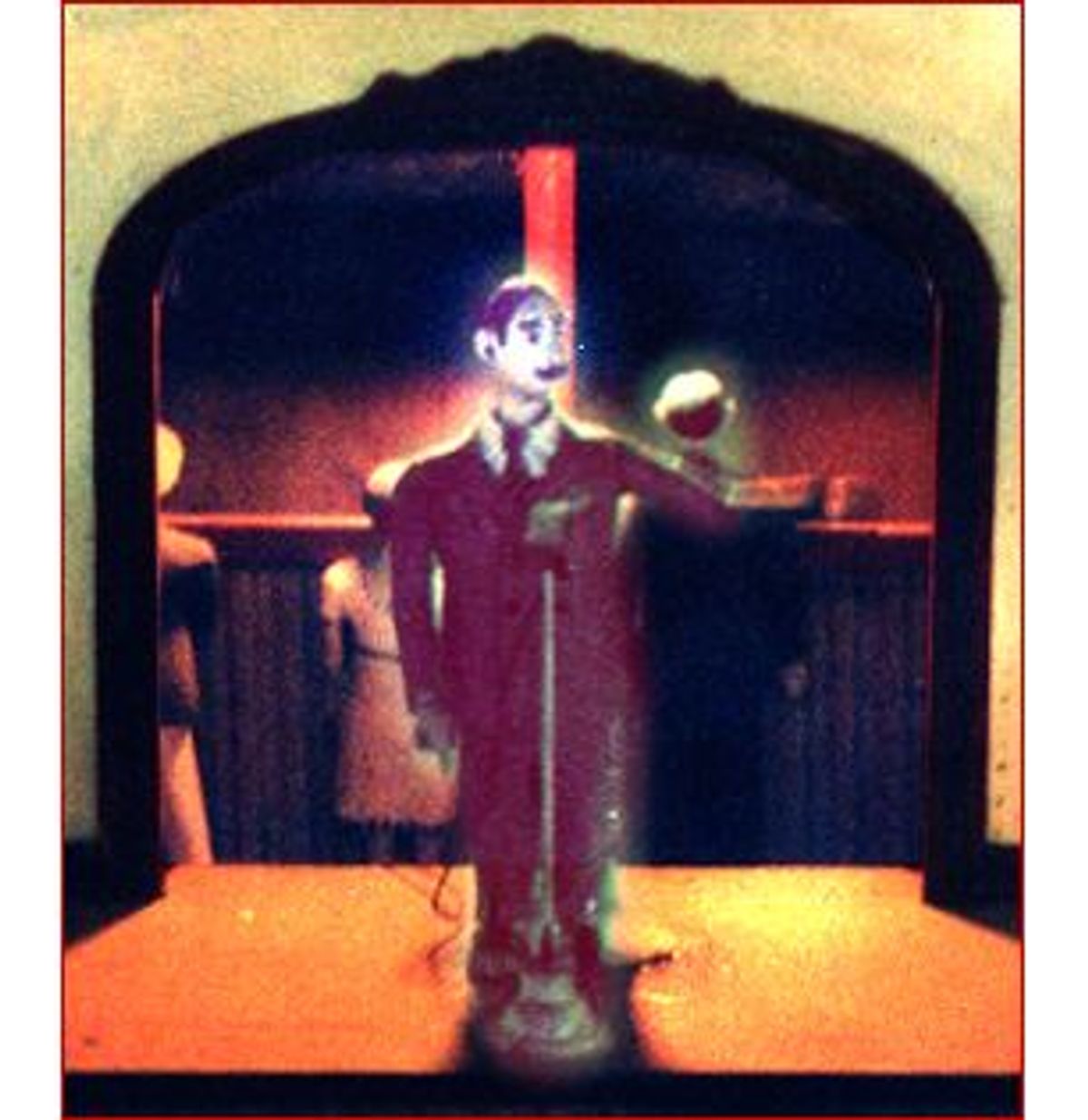 On a color-saturated stage reminiscent of an MTV awards telecast, a curly-haired pianist opened the self-tagged "culture-shaping event" by banging out a New-Agey number, which ended just as a blond opera diva, bedecked in a white ballgown and matching fur stole, started tearing into an aria while being lowered to the stage by a hydraulic lift. A sign-language interpreter translated her song for the hard of hearing, which was strange, considering that we hearing-capable folks had no interpreter to translate the song out of Italian for us. Stranger still, the interpreter was nowhere to be found when the tuxedoed Harlem Boys Choir crooned, in English, about "marching to Zion" and the "highway to heaven."

As the reporters in the press box watched with expressions equal parts amazement, embarrassment and pure terror, the choir was followed by the cast of "Stomp," which was followed by a young African-American woman, adrift in a "crowd," on stage, barking out a string of adolescent impressions, each more precious than the next: "Intelligence is the ultimate aphrodisiac," "If men gave birth to children, there would be no more wars," "If a tree falls in the forest, was it cut down needlessly?" and "Your brain weighs 16 pounds. How many ounces did you use today?"

Well I sure didn't use many on that particular morning; in fact, I swore I could feel the cells being sucked right out of my cranium, as I witnessed AltaVista flailing for cultural credibility. But in the increasingly crammed market of seek-and-search-sites -- with companies wedged shoulder to shoulder in the page-view rankings, keen on future IPOs, and flaunting personality-free, visually interchangeable interfaces -- perhaps a little odious self-congratulation is the only way to get any attention these days. So what if engaging in such aggressive marketing for marketing's sake usurps the very smart-alecky, rebel-with-a-cause climate that birthed the Internet? AltaVista certainly isn't alone in attempting to attract attention with a marketing campaign that has all the style and verve of a Dockers ad. Everyone is playing this game, striving to one-up competitors with absurdly ridiculous launch events that cry out desperately for even a smidgen of self-conscious irony. Today's search sites are trying to make the case that their products will make you smarter -- but the tactics they employ only make them look dumb.

Two weeks before the AltaVista launch, About.com, which once used to be called the Mining Company, staged its own over-the-top promotional affair -- the Red Ball, held in mid-October at the Luxor Hotel in Las Vegas. About.com's apparent goal was to solidify its reputation as the search engine that really does engage in person-to-person discussion. The company wants you to think it's the closest the dot-com world comes to replicating the hands-on attention you once got at your hometown library. The Red Ball was billed as a party for About.com's 650 "guides," regular folk with a more-than-passing interest in anything from South American travel to mixology to gymnastics. A guide can fill his or her page with whatever info he or she chooses, and a good number of them choose to fill it, at least in part, with links to other, more detailed sites. It's like a dime-store search engine that boasts a friendly fleet of
customer-service reps.

This time, think "Our Town" as directed by Fellini. Sporting matching black polo shirts emblazoned with the company logo, the guides took turns staffing expo booths to hawk their intangible wares with bits of tangible free stuff. In the span of 20 minutes, I sampled sugared pecans from the Columbia, S.C., tourism guide, talked jump serves with Olympian Erik Sullivan (an associate of the volleyball guide), sipped virgin Bloody Marys courtesy of the cocktails guide, then digested it all in my brand-new journal, compliments of the journals guide. Oh, yeah -- and I also got some Web-searching tips from About.com's Web search guide. Confined to the bowels of the Luxor Hotel, the Red Ball suggested that maybe, just maybe, the Internet could achieve all its global-village potential.

But then I returned home, booted up my office computer, logged onto About.com and spent my usual 20-odd minutes wading around, lost. So much for Las Vegas-style glamour -- there still isn't much of a correspondence between marketing budgets and Web site usefulness. And unfortunately, that's the key way that these search engines haven't changed since their nascent days. The Internet can still be an inspiring place when you're just searching around, seeing where the Web leads you, but it's also still a huge source of information superhighway road rage when you're looking for something specific.

AltaVista's excess provided possibly the best example of this axiom. A top-10 Internet search engine heretofore known mostly for being, well, a top-10 Internet search engine, AltaVista wants more. In the words of AltaVista
president and CEO Rod Schrock on Monday, "We aspire to be far more than the sixth-largest Internet company in the world." In the spirit of the dog-and-pony show mounted at the Hammerstein, AltaVista is positioning itself as the portal where everyone's Zen-meets-Pollyanna enthusiasm for the Web's wide-open possibilities gets fulfilled.

But both of these brass rings are being lunged at with a few relatively minor design and function tweaks that, in the brick-and-mortar business world, would equal a nice paint job. Stock quotes, sports scores and weather and news updates can be streamed onto your computer screen instantaneously thanks to new AltaVista satellites and news-wire partnerships. Great stuff, to be sure, but smartly beautiful, or beautifully smart, or whatever? More like just plain old boring progress.

AltaVista's pitch reminded me of yet another search engine launch. Back in September, Looksmart.com didn't try to woo me with giveaway goodies at its kickoff bash; they just plied me with liquor and let me get my picture taken with Cookie Monster. Looksmart's hook is to be the search engine for women -- the centerpiece of the bash was a preview of two television advertisements that could sell scented panty liners as easily as Web sites: myriad slo-mo shots of women jogging, goofing off with their boyfriends and driving convertibles. The message -- our search site will help you be cool.

And smart, don't forget smart. AltaVista has its own TV spots featuring a woman in a convertible -- she talks her way out of speeding tickets by quoting obscure legal cases and noting the specifics of radar gun mechanics. True, the woman is quite beautiful, and she does look smart talking down a stoic street cop with such sass. But doesn't it insult our intelligence to make even a joking claim that a revamped search engine will get the cops off your back? At the AltaVista event, Schrock proclaimed that thanks to the Net, we can now all make like Matt Damon in "Good Will Hunting," who wooed the gorgeous Minnie Driver by demonstrating just how intelligent he was. Think, willfully idiotic.

At the AltaVista relaunch, there was one final, guerrilla-tinged marketing assault: the day hires who'd just portrayed "the crowd" onstage so convincingly moved outside and gridlocked the sidewalk, hoisting placards advocating knowledge and enlightenment and once again reminding us couple of hundred journalists and schoolkids (whose schools were the recipients of 500 computers donated by the company -- an act of charity that somehow merited the cameo appearance of hip-hop princess Lauryn Hill), as we played the scabs and crossed the picket line to leave, that "smart is beautiful."

OK, so maybe smart is the new sexy. But now that the search engines are chanting that mantra with such devout, marketing-induced mindlessness, what, pray tell, is going to be the new smart?

Rose Martelli is an assistant editor at Redbook and has written for Entertainment Weekly, Time Out New York, Mode, citysearch.com and girlson.com.