"The Season" by Ronald Kessler 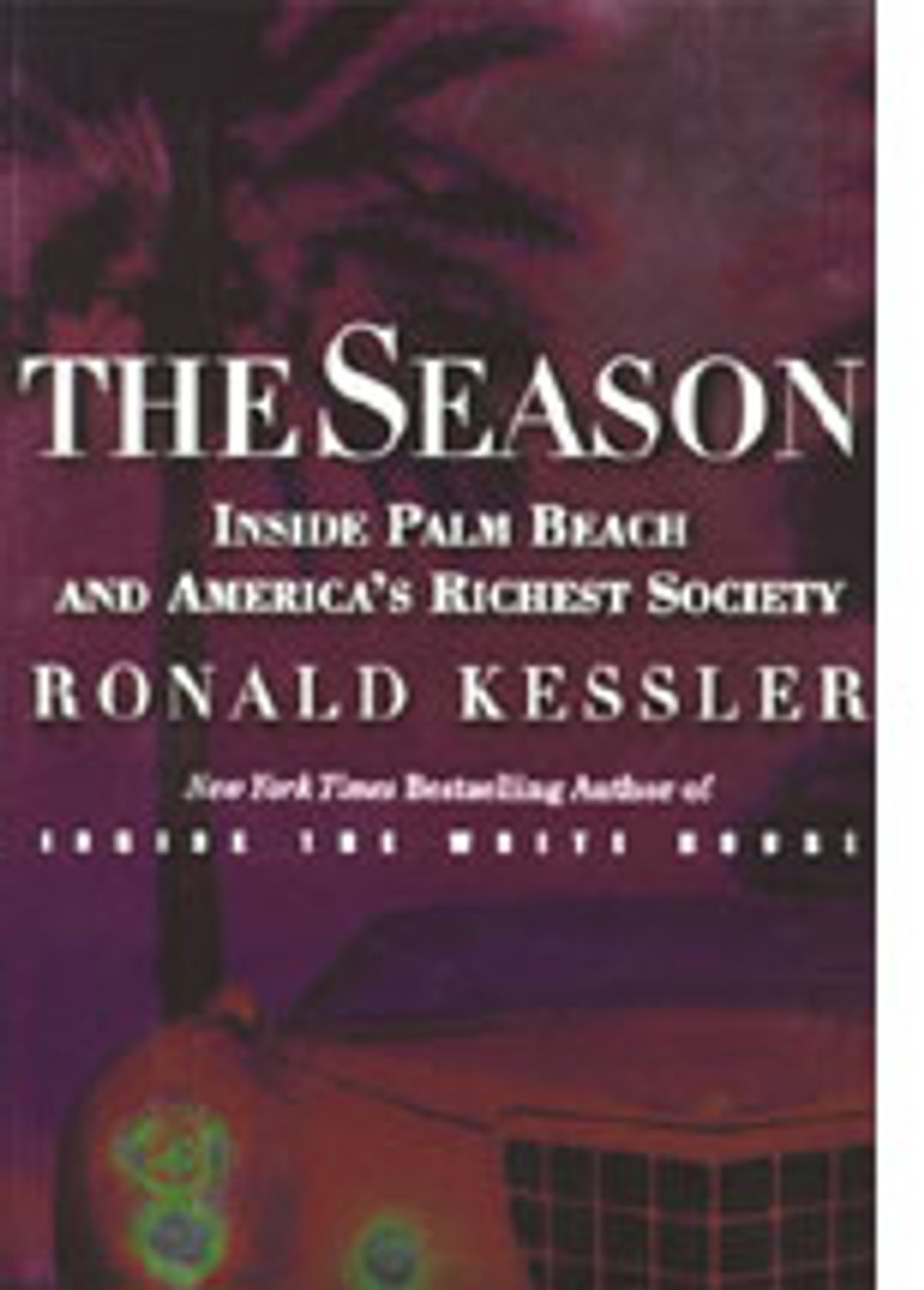 Quick, class: What's the "most wealthy, glamorous, opulent, decadent, self-indulgent, sinful spot on earth"? In which American city can you put your dead husband's body on ice for 40 days -- literally -- because you "want to party at Mar-a-Lago" and a funeral would only spoil the fun? On what "3.75-square-mile island paradise" can you murder your wife, rape the maid, plow the gardener and bar Jews from your club but find yourself shunned for cruelty to the Pekingese?

"It's Palm Beach, darling," says a resident of that preposterous pile of egotism, money, social pretension and silicone boobs. "That's what it is. You move into a big house, you drive an expensive car and everybody accepts what you're saying without asking, 'Isn't this a little bit strange?'"

"Grotesque" might be a better word to describe the denizens of the world's most pompous resort. Not even the Grimaldis' Monaco can rival Florida's gilded swamp for sheer parading and enslavement to appearances. The comparison is relative, of course: Monaco is still a police state, but Palm Beachers are no longer allowed to fingerprint the servants. "It was a nice feature of living in a town like Palm Beach," says the city's mayor, the son of a Romanov grand duke.

Ronald Kessler, a former Washington Post investigative reporter and the bestselling author of "Inside the White House" and "Inside the CIA," now kneels to billionaires, dowagers, bimbos, "escorts" and lounge lizards in "The Season: Inside Palm Beach and America's Richest Society." Kneels to them and gives them "a Lewinsky," as the saying goes. Despite its hype as "a powerful, seamless, juicy narrative that no novelist could dream up," Kessler's chronicle of so many leather-skinned paranoids on South Ocean Drive is the work of an overpaid lapdog. Someone should tell him the truth: No novelist would want to dream it up. A book about the private lives of alligators would be more interesting and make the same point in less time.

Granted, Kessler had some problems gaining access to "the beautiful people" in "plastic-surgery central," as one of his four main sources, "the night manager of Ta-Bos, Palm Beach's trendiest and most successful restaurant and bar," describes the moral vacuum he calls home. As a Jew, Kessler was automatically under suspicion in a famous nest of WASPs. As a reporter, he labored under the restrictions that apply to any journalist who has to suck up to his subject -- that is, he got his information in exchange for allegiance to the status quo. "Palm Beachers pretend to be above it all," Kessler writes, "but I found they thrive on the latest gossip, making for lively dinner-party conversation or late-night prattle over scrambled eggs and truffles." You can learn more about the place just by stepping over into West Palm Beach, where the workers and wannabes live.

Like all celebrity exposis, "The Season" promises vastly more than it delivers. Can anyone really care that Roxanne Pulitzer regards her drug-drenched, threesome-riddled existence as "more normal" than the lives of most people she knows? Are you surprised to discover that money rules everything in Palm Beach and that "Roman orgies" abound? That "most Palm Beach women go bare-legged," eschewing pantyhose "even with formal ball gowns"? That William Kennedy Smith was acquitted on rape charges? That Barton Gubelmann, the purportedly reluctant "queen" of Palm Beach's Old Guard society, thinks "every single man around here is a gigolo"? That most of the gigolos and escorts are gay? Can you believe it?

In Kessler's nest of mummies, vipers, babes and moneybags, only one person emerges as a hero: Donald Trump, who bought Mar-a-Lago in 1985 and stunned the Old Guard by turning it into a country club that accepts anyone as a member -- Jews, blacks, you name it -- anyone, of course, who happens to have buckets of cash. Kessler seems to approve of this move, but it's as close as he comes to a democratic impulse. All 336 pages of "The Season" are tainted by his wide-eyed wonder at the glamour of it all. The fun comes in watching the Trumpster rile a crowd that ought to be first in line for the tumbrels, should such a glorious moment ever return.