What is a Jewish lesbian punk folk singer to do?

Neaten her crewcut, put on an apron and sell lots of Tupperware. 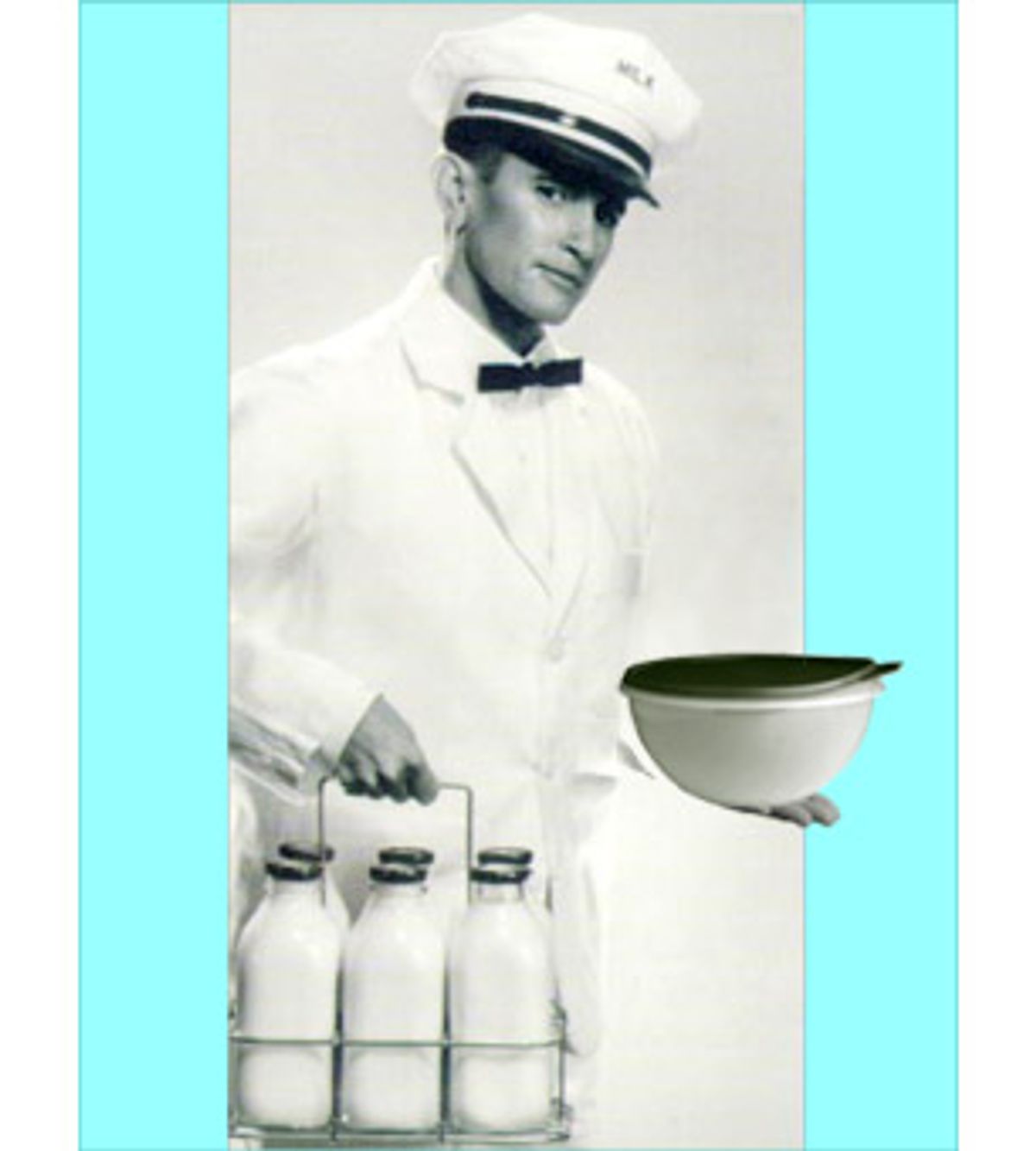 Driving to a Tupperware party last week on one of those bright fall
afternoons in L.A., I got gloomy. Why was I going to an event organized around plastic vessels? What on earth did Tupperware have to do with me?

The answer was ostensibly comforting. I was going because this particular Tupperware party was being given by a locally renowned punk-turned-folk singer. An L.A. story if there ever was one, replete with kitsch-rich possibilities. Yet the punk element was not enough to completely erase all of my unappealing free associations with Tupperware: the drab '50s bungalows, the career housewives, the bad meatloaf and the bad, bad plastic juju.

Tupperware was always one of those seemingly innocuous things that was actually the dark antithesis of creativity and cultural resistance. In my house, my Louisiana-born mother used tin foil and empty Cool Whip bowls to pack away extra food or to assemble care packages for Thanksgiving dinner guests. Tupperware was too ordered, too well-thought out; it was capitulation of the first, and worst, order.

Compounding the psychic challenge was the fact that the party was to be held in a lovely, hilly section of town east of Hollywood that I'd visited twice in 37 years. You had to drive over a charming little bridge to get there. I vowed to duck in, breathe the air as little as possible, take notes and duck out.

The house is one of those wonderful, rambling art-deco bungalow places
from the '20s that became de rigeur habitat for L.A. yuppies in the '90s. The predictability of the motif ended, however, with my arrival at its door. Phranc -- the self-proclaimed "all-American Jewish lesbian folk singer" -- hovered there, waiting to greet me.

She has a pleasant, slightly weatherbeaten face, a tidy crew cut and no jewelry. Her accessories comprise a spotless white shirt, a polka-dot bow tie and an apron with "Tupperware Lady" stitched across the bib. From her waist dangles a colorful assortment of Tupperware mini-goods mounted on key chains: a spatula, a pitcher, a grater. Phranc's face is slightly flushed; the house is pretty full and this is only her second party. She smiles and encourages me toward the snack table, and I find her hospitality touching and disarming -- perhaps she isn't the only one feeling a bit displaced.

"I've always wanted to sell things, but I never have until now," she confides
later. "I thought about advertising first, but you know, you have to have at least one degree, and I dropped out of high school. I had to figure out something else."

That something else was Tupperware, a product Phranc says she was born to sell because she grew up with it and deeply believes in it. She has a Tupperware mini-bowl handed down to her by her mother that functions now as a kind of inspirational touchstone.

"I'm very old-fashioned, an Ozzie and Harriet kind of girl," Phranc says sincerely. "I mean, look at my hair!"

And how do people react when she tells them she's a Jewish-lesbian-folk-punk-rock singer who also happens to be a Tupperware lady?

"The first thing people do is laugh and laugh," she says. "And then they say, 'I need to order something.'"

Lunch is an acute childhood sense memory: toothpicked sandwiches,
Fritos, frosted animal cookies, Jell-O mold. I am feeling much better about being vacuously American; it feels not so much like a capitulation as it does a very necessary indulgence of social imagination, a piffle of a dream that serves to more firmly bind the grit and integrity of real life. The Tupperware display out on the sun-dappled deck, all bright blues and greens and raspberries, is such a vision.

Phranc straps on a guitar and opens the proceedings with a heartfelt ditty called "Tupperware Lady" (soon to be released as a single by Phranc on her own label, Phancy Records.) Her voice is sweet, reminiscent of Joan Baez, decidedly more folk than punk, and the group gathered outside -- parents, children and singles alike -- sways and nearly breaks into song. The Tupperware Lady then gets down to business, holding aloft and exhorting the wonders of such select items as covered ice trays, stainless steel ice cream scoops and the pihce de risistance, salad spinner bowls that double -- no, triple -- as colanders and strainers.

I am caught up in this simple magic, in the chorus of oohs and aahs, and my earlier doubt evaporates like morning haze. Phranc's sprightly delivery has just the right blend of sly humor, showmanship and old-fashioned sales patter: "I love Tupperware because it's fun, flexible, and ... it supports me!" she declares, placing a bowl on the deck and standing on top of it in her black lug-soled boots, to a burst of applause.

She makes Tupperware seem both wonderfully frivolous, almost like objets d'art ("Isn't this Healthy Baster a gorgeous blue? Pass it around!") and rock-bottom essential. ("These sealed tumblers are great for kids ... as well
as alcoholics who tend to spill their drinks!") Everyone is cozying up
to the idea of Tupperware acquisition, from collectors to novices to those, like me, who almost never cook and have no real use for food contraptions.

One guest in his 20s admits to me that he lives in a one-room apartment by the beach, is rarely home and has no discretionary income to speak of. "But," he says, sharing a Tupperware moment, as we all do at some point during the day, "I still eat my oatmeal out of a Tupperware bowl that I've had forever."

After the show, Phranc breaks out order forms and a calculator in a
back room and the guests line up into the hallway, checkbooks and ATM cards in hand. The Tupperware Lady rings up $900 in sales, bringing her grand total to $5,000 in just three weeks on the job.

"This is the best gig I've ever had," she says. "Tupperware rocks!"

It's certainly proving to be more lucrative thus far than the music
business, which the 42-year-old Phranc has been a part of for nearly
20 years. In the late-'70s and early-'80s she was a fixture of the L.A. punk scene, playing in bands like Nervous Gender and Catholic Discipline alongside such punk notables as the Circle Jerks and X. But she also wanted to distance herself from a certain nihilism she saw in the genre, and with her first acoustic single, "Take Off Your Swastikas," she officially
became a solo artist who could give free rein to folk inclinations.

Things went relatively swimmingly for years; she put out albums on Rhino Records and her own label, and opened for Morissey during his world tour in 1991. But everything stopped abruptly that same year when, during the tour, she got a phone call in Boston informing her that her brother had been murdered.

"My momentum stopped for a long time," says Phranc. "I was so sad. I
needed to slow down and reevaluate what I wanted to do." She began devoting much more time to artwork, something she had always done in the margins of her music career. The mostly three-dimensional pieces fashioned from cardboard, dubbed Cardboard Cobbler, are now a crucial part of her growing enterprises.

When she returned to music full-time in '93, she was relieved to find
that she hadn't been entirely forgotten. "The business moves very
quickly," she says, "and it's very easy to become invisible and stay invisible."

Her new act includes a bit called Hot August Phranc, in which she does signature Neil Diamond tunes. If her Tupperware mien is any indication, Hot August is more of a salute than a sendup, a nod to the kind of passion that, in this age of irony, is almost entirely passi. Phranc doesn't believe that the two -- passion and irony, she and Neil -- are mutually exclusive.

"Folk and punk, for example, have a lot more in common than people think," she says easily. "Musically, they're very similar -- there's two, or three, or even one chord. The difference is in volume and speed. They're both music of the people that carry a message. Woody Guthrie and Nine Inch Nails aren't that far apart."

Neither, it turns out, are me and Tupperware. Far apart, that is. In
the afterglow of the party's success, as Phranc efficiently packs up her display, one late-arriving guest in a Hawaiian shirt sits and muses, pretty unironically, on the whole Tupperware weltanschauung.

The stuff is as American as we wish we were, he says, the essence of
uncomplicated equipoise: square and definitive but clear and flexible,
airtight, supremely adaptable, consummately useful and, however much it is abused, virtually indestructible.

"It's the perfect synthesis of rationalism and art -- what Jefferson
called enlightened rationalization," he waxes on. "What could be more rational than Tupperware?" And, he adds, "It's timeless -- past, present, future. It's Jeffersonian andJetsonian."

Phranc smiles brightly in agreement. Her personal heroes -- and
heroines -- in this business are Brownie Weiss, the first Tupperware lady from the '50s, and a drag queen named Pam Teflon, who is currently L.A.'s hottest seller.

"He's one of my greatest inspirations," says Phranc, with a bit of awe. "I mean, before, he had nothing. Now he's doing $5,000 a week with Tupperware and he has a show on Comedy Central. He's so busy, he might have to give up selling."

Not only does Tupperware inspire philosophizing, it makes Hollywood take notice. Talk about synthesis. Utterly woozy with a sense of possibility, I sit and fill out an order form for a pitcher, a commuter coffee mug and a set of modular containers called Packables. I have no idea how I'll use them.

Phranc cheerily makes out my receipt and then, in a spasm of sororal feeling, invites me to a Tupperware rally next week. "Everybody is great, the
training is free," she says. "At the rally I went to, there were about 200 housewives, a drag queen, and me. I was so excited, I couldn't sleep. Tupperware is really all about family."

And, she says, it'll pay for her next record.