A woman with cancer rediscovers her body through a passionate love affair. 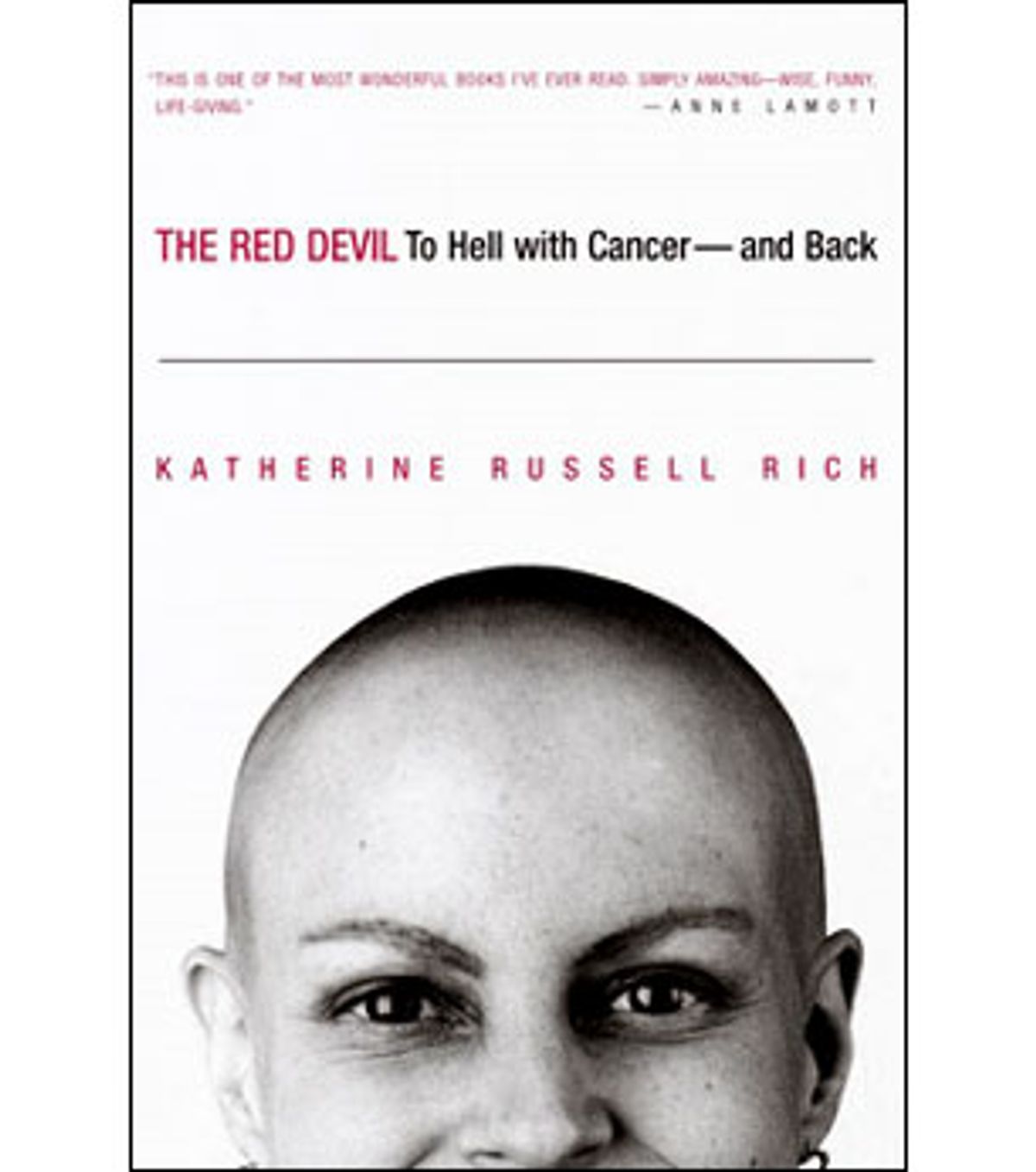 After that first night of compressed desire, when he'd turned to me in the blue-gray light of the video we'd rented and said, "This may be a mistake, but I'd really like to hug you," after he left my apartment at four a.m., then phoned midmorning the next day to ask, "Did I leave my belt there?" with such an obvious purr of happiness that I was reduced to embarrassed mumbling, right exactly after that, I closed my office door, phoned the shrink, and relayed what had happened, declaring, as melodramatically as whispering would allow, "I can't believe it. I wish he would die."

No you don't, Neden replied. I could tell he was as surprised as I. But professional training prevented him from indulging in the pleasures of double-speak hyperbole.

I did. I adored Ben. In the last couple of months, Ben had been tenacious about investigating metastatic breast cancer on my behalf. He hounded the disease as best he could, and best for him meant research. He was a journalist. Information, as he saw it, was my strongest defense.

"Package here for you," the receptionist would unexpectedly
phone back to say every so often. I'd come out to find another gray envelope thick with clippings, some from obscure medical journals. I preferred these, the articles with the tangled footnotes that Bell had cryptically circled. It was reassuring to stumble on sentences like "Identification and purification of the 'stem cell' responsible for repopulation of marrow and for sustained hematopoietic cell renewal have long been a goal of experimental hematologists." Scientists were clearly moving on the problem, though I couldn't always tell where. I hated the stories torn from popular newsstand magazines. In the quiet of my office, words like dismal and two-year survival would jump off the page at me like barking dogs.

Since I'd become sick, Ben had shown a deep, fraternal concern. I'd begun to regard him as a brother, and that was half the trouble. The other half was, I just didn't get it.

"It's like he's making fun of me," I was trying to explain on the phone. "I don't understand. What would make him want to get involved with me now?"

Why don't you ask him? the shrink proposed.

"I was going to bring it up if you hadn't," Bell said at the restaurant that night, shooting a quick glance up from his tureen of mussels. An intolerable shyness had overcome us both. To surrounding tables, we must have appeared to be two people speaking into our plates.

"Courage," he said somberly, addressing a green fleck in the broth. "Courage is a real turn-on. I was really turned on by how courageous you've been. And beauty. Courage and beauty. I've always liked you and thought you were attractive, but since you've gone to the magazine, you've really looked good."

By the time the waiter set down the Belgian-chocolate mousse, we were sitting up straighter, as if there'd been a shift of air pressure in the room. I examined his face as we discussed how to proceed, agreed to go slow. The slight pulsing light coming off his skin had no discernible source. Ben was beaming.

Outside my apartment building, before we went upstairs, he paused and held me. "I wish time would stop," he said.

Later he said, "You're like that dessert. Wicked. And sweet."

Ben left town. He had an assignment, in Detroit. When the
weekend came, I went to a party. I went to the gym, I cleaned the
apartment. I was floating.

On Monday night I'm floating once more, but in a different way. In bed I keep my eyes fixed on a painting of palm trees. The pain has gotten bad again. I've taken two pills tonight, the doctor said I could, and I'm skimming on reverie through the lush, ocher air of a codeine haze.

In these tropics, in my bedroom, I'm cresting on emotion, so smooth. I nurse languor with each breath. It's sweet, sweet like the way, I admit now, groggy and grinning, that I've loved Ben from the beginning. I let the thought "I love him now" skitter through my head as I mumble to the palm trees about how I don't want a savior, I just want him, I love to touch him, stroke his back, his hands. We're cruising together, Ben and I, and I love it, I love it, till I foolishly allow myself to replay the nights with him in my mind, and the ocher takes on the dirty yellow tinge of fear. The nights were too good. When I see him again, he could say they were a mistake, he's sorry, he can't, and I'm crashing. I don't want them to have been one flash of dreamlight in the long black stretch of these terrible months. The codeine tumbles me and I hit hard, because, of course, I'm not just worried that Bell will reconsider. I'm so afraid that I'll get sicker, and this will all end.

When Ben returns, he doesn't say anything like "My mistake." For the first three hours, he doesn't say much. We're at his apartment, a bachelor house. His blue couch is soft, except in the spots where his cat has shredded it and he's placed Scotch tape over the tears. We lie down, and when he touches me, the pain eases. I'm happy.

Later he tells me about a woman he loved, someone who treated him badly. "It was ten years ago," he says. "You'd think -- ten years -- but it's still painful. We were really in love. And the thing is, I could have the same feelings for you."

She left him, he said. And he's worried he'll leave me, that he won't be able to take it. We're in bed now, side by side, staring at a groining of light that's forming on the ceiling. He doesn't see me when I nod.

I do, I nod, because, for one thing, I'm not surprised. This guy was my friend for years. I already gathered he wrote the manifesto for men who can't commit. It's not a screed that's alien to me; I've contributed a few tracts on the subject myself. I nod because cancer and codeine's making me reckless, bold -- so what, I'll take the risk. But mostly I'm nodding acceptance. Once it's been stated, I see the worst isn't that bad. I can't tell if Ben can be strong enough. But I do know I loved him once without hope that he'd love me in return, and that had to have been harder than any bad ending that might happen.

Shadows are vaulting the ceiling. I reach over and trail a finger over his cheekbone. He shifts his head, smiles. I smile back. Since I never thought I'd have him, all this is gravy. If he left me, it would be awful. But if he did, I'd survive.

Two dreams wake me the first week in June. Neither requires the services of Dr. Jung. In one I've gone to Switzerland. I'm trying to buy a watch, but the man will only sell me a small one. A watch, get it? Time. In another, Lynn (a friend from college who'd died) appears. We're straddling a bench, facing each other, playing cards. Another winking nudge from the subconscious, a dream for the remedial sleeper. Because what Lynn and I are playing for is, of course, time.

On the afternoon of the first whole night we plan to spend together, I stop into a small lingerie shop on my way back from the gym. My top drawer needs replenishing. Nothing in it fits anymore. Behind the curtain, I'm wrestling with a strap when I hear a gruff, familiar voice. "Do you still have that sleep shirt I was asking about a few days ago?" Ben. "Ben!" I cry, grabbing the curtain and circling out so the fabric wraps around me like a sarong. Caught in the middle of examining undies, he looks grimly shocked. Then he breaks into a grin.

"Do you two know each other?" the salesgirl asks as we both laugh and one of us squeals.

"Have plans for tonight," I inform her.

"Uh-uh! I don't believe it," the salesgirl exclaims, and we all three shake our heads.

That was like an O. Henry story, he and I agree as we emerge from the store carrying bags packed with tissue.

The sleep shirt is thick silk, a cream stripe imprinted on cream. "It's beautiful," I whisper when he formally presents it that evening. I quickly slip it on -- then hug my body so he can't see it's way too tight. The sleep shirt's a medium. I've become a true large. Ben doesn't indicate he's noticed, but he must have. When later he says, "You're so sexy. Men must flock to you," I check him for signs of veiled sarcasm or pity, but his brown eyes are narrowed. He's serious. I'm fatter than I've ever been, bloated from cancer treatments, and he thinks men are flocking to me. Well, one is. The one I want.

Some things I do with Ben that I haven't done before: Sit willingly for sweeping romantic gestures (he brought a book of ancient Chinese poetry to a coffeehouse, for instance, and read it to me out loud) and don't think, Boy, is this embarrassing. Make out in the back row of a movie theater. Fool around in the back of a cab. Learn the steep and intricate pleasures of a foot message.

Swoon in an eighth-grade manner about the boy to the members of the support group.

I'd lead with an oncological concern, then catch a quick dogleg. "I didn't need to have the X ray, after all," I said, "but since I'd left work anyway, I went to Ben's. He's so cute." The tactic wasn't really washing. I had an idea I was becoming the most unpopular person in the group. One woman in particular, Nancy, was shooting me daggers. "You just don't know yet how bad it is," she'd hissed when we were alone together in the elevator.

I couldn't help it. I was a goner. Besides, if these women wanted to talk alternative healing, I had a few suggestions. I hadn't realized how angry I'd been with my body -- damn lump, damn scars, damn splintering, collapsing bodies -- until I lay on the couch with Ben and he kneaded me, lightly at first, then fast and deep, till soma welled and flowed over me, washing the anger away. Little by little, he was returning my body to me.