"Stephen Spender: A Life in Modernism" by David Leeming

A biography of the celebrity-loving man of letters -- friend of Auden and Isherwood, surrogate son of Eliot and Woolf -- whose social calendar was one of his finest works. 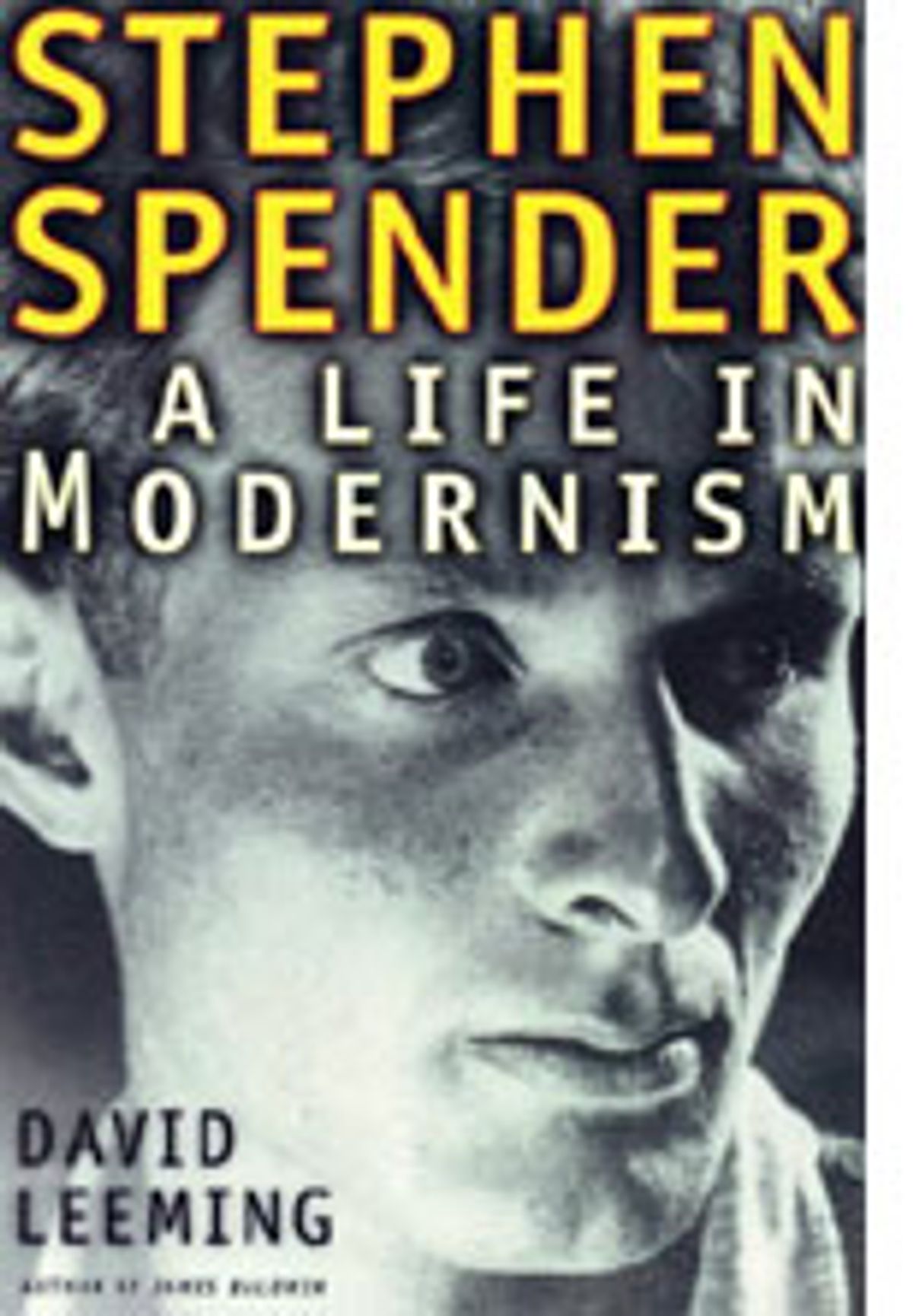 By the end of Sir Stephen Spender's lengthy life, he had become one of that near-extinct species, the man of letters. So when David Leavitt "borrowed" materials from Spender's autobiographical "World Within World" for his novel "While England Sleeps," it seemed almost like a case of necrophilia -- a vampiristic author filching from the undead.

In the ensuing scandal, many people sympathized with Leavitt, arguing that Spender had taken legal action because he did not want his homosexuality broadcast after he had become an English monument. This scenario is unlikely, because until the end of his life Spender, though committed to his wife, Natasha, was uncloseted about his attraction to men. A more likely possibility is that Leavitt failed to grasp that for Spender -- who had written novels, plays, memoirs and many volumes of poetry and essays -- "World Within World" was his narrative as well as his greatest achievement.

Spender was famous for his intimacy with the literary giants of his age. Virginia Woolf and T.S. Eliot were his surrogate parents, and they lionized him; W.H. Auden and Christopher Isherwood served as his substitute older brothers. From his days at Oxford in the late '20s, where he was a young man of immense charm and beauty, until his death in 1996, Spender made the pursuit of "the great" the focus of his life. Yet the company of the great, which gave glamour to his life, obscured, and then dwarfed, his achievements.

David Leeming has written a biography that is more interested in Spender the socialite -- the collector of the great -- than in Spender the writer. (The comments on modernism to which the subtitle alludes are perfunctory and not really central to any discussion of the book.) Leeming does write a clean, chatty prose, and he has kept his book free of academic jargon; reflecting its subject, it is refreshingly unpretentious. But an accumulation of facts does not add up to a satisfying biography, and early on I got tired of reading the litany of events that filled Spender's social calendar. The Queen Mother and Jacqueline Onassis, for example, make gratuitous cameo appearances merely to add more marquee names to the cast of notables.

Are we to believe that Spender was merely a star-fucker and a literary dilettante? Fortunately, Leeming quotes copiously from "World Within World" to dissipate this notion. And if this biography serves no other purpose than to lead readers -- as it did me -- to Spender's masterwork, that's enough.

Spender thought of himself as an autobiographer. Marianne Moore described him as a discerner "of the core of a writer's intentions," and Virginia Woolf praised "his large generous sensitivity." Perhaps Reynolds Price said it best when he called Spender "a brilliantly generous connoisseur of beauty." In "World Within World," all these qualities shine. The book is a masterpiece: a major philosophical and aesthetic attempt to encompass the cosmos of Europe during the first three decades of the century. It is memorable for its portraits of Woolf, Eliot, Auden and Isherwood, which have the psychological depth of Rembrandt and the elegance of Velazquez. It contains Spender's dazzling comments on German architecture and his keen insights into the street life of prewar Berlin and the scapegoat-hunting paranoia of the economically desperate German middle class. And it was one of the first books in which a prominent intellectual drew the parallels between communism and fascism.

"World Within World" is a symphonic elegy to a dying way of life. It was Spender's misfortune to have written it when he was barely 40 years old. Afterwards he lacked what he termed "the stillness of attention necessary for creative work." His life became a series of literary luncheons, teas and weekends at the estates of the powerful.

Spender admitted in his most famous verse, "I think continually of those who were truly great." It must have been poignant for him to realize that although he was capable of greatness, he preferred being a contented gentleman. He certainly had his regrets about the life he chose (as Leeming often reminds us); but he was wise enough to realize that any man who in his 70s finds love with a 20-year-old boy hasn't exactly wasted his life. Auden, under whose shadow Spender lived much of life, was the greater artist, but Spender was the happier man. Of Isherwood, Spender wrote, "He was on the side of the forces which make a work of art, even more than he was interested in art itself." The same might be said of this brilliant and fascinating 20th century humanist and gentleman.

Jaime Manrique is the author, most recently, of "Eminent Maricones: Arenas, Lorca, Puig, and Me."