Three photography books focus on the amazing spectacle of the planet we live on and the skies beyond. 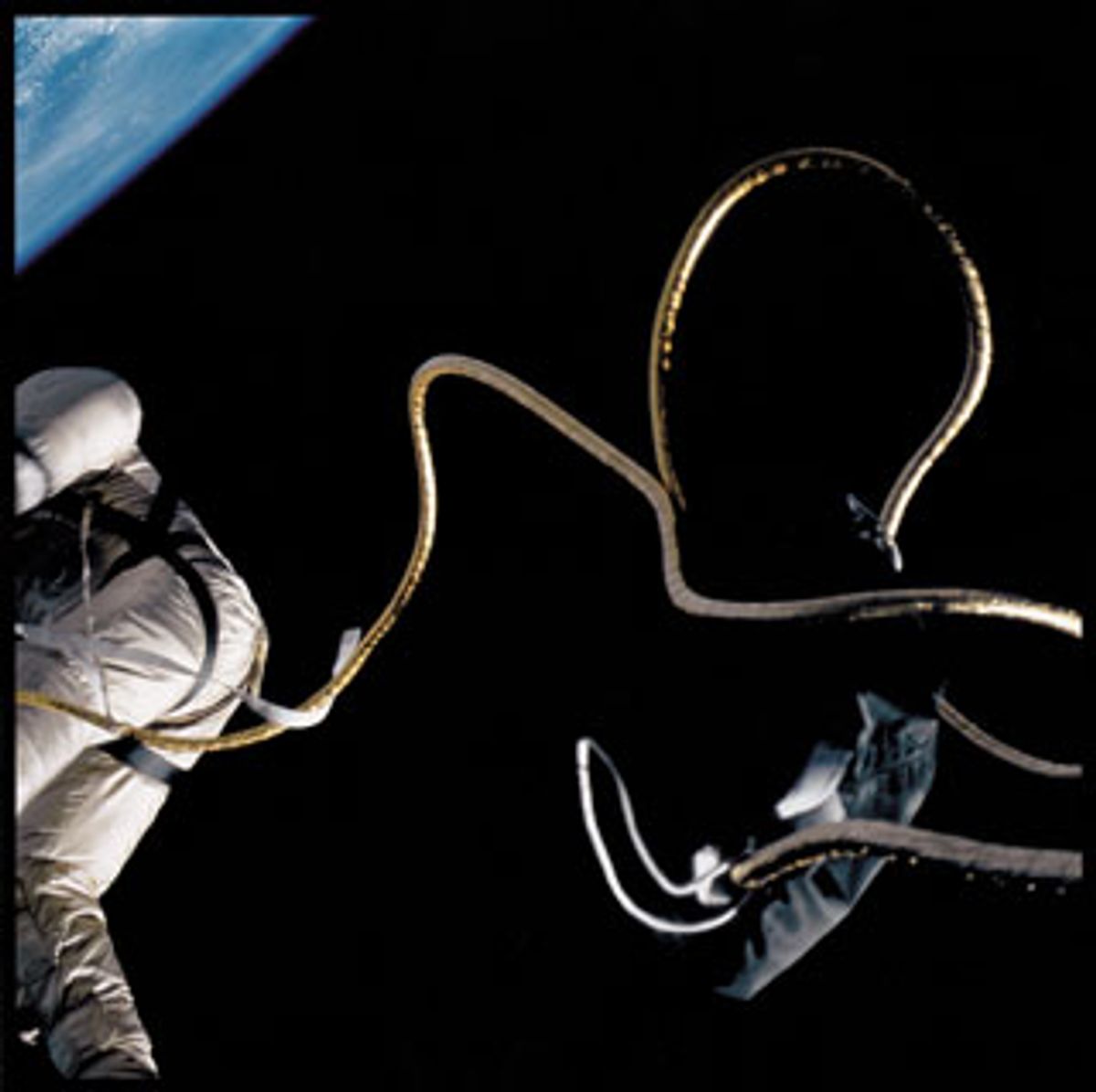 One of the more worthwhile aspects of millennium madness may be the resurfacing of an urge to set aside the mean concerns of everyday life and reflect on who we are, what we are and what on earth -- and away from it, for that matter -- it all means. Three recent books of photography go surprisingly deep in exploring the awe-inspiring sights of our terrestrial, lunar and celestial surroundings.

Although images from National Geographic, CNN and the Discovery Channel can at times make our planet seem all too familiar, the Earth is still a source of wonder -- something that "Earth From Above," a new coffee-table book by French aerial photographer Yann Arthus-Bertrand, makes clear.

At 416 pages and eight pounds, this encyclopedic compendium doesn't seem to leave much out. With a team of more than two dozen assistants, Arthus-Bertrand completed a five-year project in which he flew in airplanes and helicopters over 75 countries, photographing geological formations, rural settlements, desert dwellers, sinuous coastlines, urban metropolises and much more. Most of the 195 photographs span two full pages, and thanks to an extensive legend system, each one has an informative thumbnail caption describing locations, histories and other pertinent information.

All 10 sections cover a satisfying range of land and sea, often in striking progressions. The first volley, for example, proceeds from Yellowstone National Park to the Sulu Archipelago in the Philippines to the Okavango Delta in Botswana to the Folgefonni Glacier in Norway. The sections are punctuated with thoughtful commentaries by historians, demographers, economists and geographers, the bulk of which are cautionary essays on population control, the distribution of wealth, urbanism, cultural diffusion, gender inequality and resource exploitation.

In its sheer scope and breadth of imagery, "Earth from Above" is a unique achievement. The photographer varies the altitudes from which he shoots and comes away with previously unseen perspectives on the forces, terrestrial and human, that we live with daily. His eye is strongest with design, both natural and manmade. One pair of photographs juxtaposes a close-up of the shimmering roofs of Frank Gehry's titanium-clad Guggenheim Museum Bilbao, all chaos and order and song, with a very high view of silvery salt deposits in Namibia's Etosha National Park, whose elongated antler forms and irregular basins look like a half-dozen whacked-out reindeer from a Tim Burton movie.

One picture quietly illuminates the sometimes invisible links between nature and "culture." At the center of an arid landscape in Tsavo National Park, Kenya, stands an acacia tree, known as the Tree of Life, that has managed to stay healthy and green, providing shade to a small patch of the ochre dirt beneath it; surrounding the tree is a crisscrossed network of narrow animal trails leading in from all directions. It's a gorgeous image of nobility and perseverance, which becomes somewhat disquieting when you realize that this Tree of Life is the image that Disney has appropriated, and re-created in living plastic, at the center of its Animal Kingdom theme park in Orlando. Art imitates commerce imitates life.

It was only 30 years ago that human beings first visited the bright, mottled world that hangs in the night sky, but to many it feels like a distant historical event. In "Full Moon," photographer Michael Light rekindles the excitement of NASA's achievements. Using the mission photographs taken by the astronauts themselves, he's recaptured the elemental amazement that the missions to the moon produced.

Light negotiated with NASA for the right to take many of the first-generation negatives and transparencies off-site (the originals remain locked away, untouched, in frozen storage) so that he could scan them digitally. His new, ultra-clear prints are worlds away from the thousands of now discolored copies in circulation. He has assembled them in a strong narrative arc, like a 200-page storyboard, with no text until the end (where we get essays by Light and Andrew Chaikin, and thumbnail captions to all the photographs). Like the best histories, "Full Moon" tells its story through primary sources, and it's the most spine-tingling book of photography I've ever "read."

Light has sequenced the square-format photographs in three parts and presented them with black borders and intermittent black facing pages, which provide an appropriate sense of silence. Part I, covering the outward journey, begins with images of fiery Saturn V rockets ascending and moves to a stubble-faced Walter Schirra, with a head cold, peering out the hatch window of his command module. Then come astronauts spacewalking against the blue Earth, including particularly disorienting views of Edward White's first American spacewalk, during Gemini 4. The astonishing clarity and precision of detail in the images owe much to the vacuum of space and NASA's choice of camera -- the Hasselblad, which Schirra lobbied for.

The Earth becomes smaller in various crescent images until it's abandoned in favor of the approaching moon. Alien craters and dust and mountains and seas come into view in stunning close-ups. It's a new world too large and unknowable to bear much resemblance to your usual friendly full moon. One more picture of home -- the first Earthrise ever seen (by man, that is), taken by William Anders on Christmas Eve 1968 -- gracefully interrupts the riveting approach to the lunar surface.

Light has purposely made his narrative nonchronological, weaving together images from 1965 (Gemini) to 1973 (two pictures from a Skylab mission splashdown) in order to tell a story that's less traditional and much more personal than the one we know. Most of the pictures in Part II, taken by astronauts on the lunar surface, are quite unfamiliar. The only truly iconic image here is Buzz Aldrin's boot print; it's preceded by a wonderfully unprepossessing picture of the same patch of soil just before Aldrin stepped there. The photos that follow are eye-opening in the ways they divulge the scope of the geological experiments done on the moon, the luminous beauty of the landscape (especially in several multi-page panoramas) and the intensely personal experiences of the 12 men who walked there. One picture by Charles Duke shows a snapshot of the astronaut and his family in their backyard, wrapped in a plastic bag and lying on the surface of the moon, its new home. That's some wallet photo.

Part III, the trip home, is the shortest section, a satisfying and still exhilarating denouement, which includes perhaps the best-known space image of all: the full Earth, in all its glorious blue marble-osity, as seen from the final Apollo mission. It's an image that reflects a feeling most of the Apollo astronauts came home with -- that in the end, their exploration of the moon was secondary to our rediscovery of the Earth.

Flip through the important illustrated publications on astronomy and you'll come across scores of David Malin's color images, which often present never-before-seen close-ups of distant galaxies, nearby star clusters and brilliant stellar nurseries. Head-turning cosmic imagery has enjoyed front-page and screensaver prominence since the first Hubble Space Telescope digital images in the early '90s, but Malin, working with two telescopes at the Anglo-Australian Observatory in Australia, has been taking spectacular pictures the old-fashioned way for the past quarter of a century.

"The Invisible Universe," Malin's new book, is of Atlas-like proportions -- Malin feels it's less a coffee-table book than a dinner-table one. The compendium begins with words, not images, including a foreword by science writer Timothy Ferris, a thoughtful, fluid introduction by Malin and a particularly clear and focused "cosmic primer" in which Malin defines interstellar dust, planetary nebulae and the like for the lay reader.

But the astrophotographer quickly embarks on a star voyage, presenting 52 full-page color plates that amount to a brilliant tour of several constellations in the southern sky. Most of the phenomena here are undetectable to the naked eye and even to observers using powerful telescopes. Malin usually shoots three exposures of the same object, in red, green and blue light, and then combines them, in perfect register, onto one negative. His many other techniques, including some very long exposures, are complex, but the results don't look that way.

The first image shows the well-loved Orion and Horsehead Nebulae, neighbors in a cosmic pas de deux about 1,500 light-years from Earth. Here, in the astronomical equivalent of a wide-angle photo, the suns of Orion glow white-hot; there is little detail in the nebula's central and outlying dusty regions, and the rose-enshrouded Horsehead looks like a toppled-over and forgotten toy. The subsequent photographs, however, zoom in to reveal monumental pillars and caverns of elemental dust and gas in subtle tones of yellow, orange, blue and crimson. Further on, the Rosette Nebula looks like the jewel of a world-class botanical garden, and the seven sisters of the Pleiades twinkle with crosses and halos through their deep indigo cloak of dust.

Malin accompanies his works with extensive histories (mostly Western-oriented) of the constellations and their significance. Astronomy, he reminds us, is at its root a form of "star ordering, or regulation  It is not the immensity, or even the beauty, of the universe that is so humbling," he writes; "rather it is that we know so little about it."

Images from "Earth From Above" are on display at the New York Public Library's Science, Industry and Business Library, Madison Avenue at 34th Street (212-869-8089), through Jan. 26.

Andrew Long is a senior editor at Departures magazine, and writes frequently about photography.