The latest kids' movie is taken on by the real critics -- five kids. 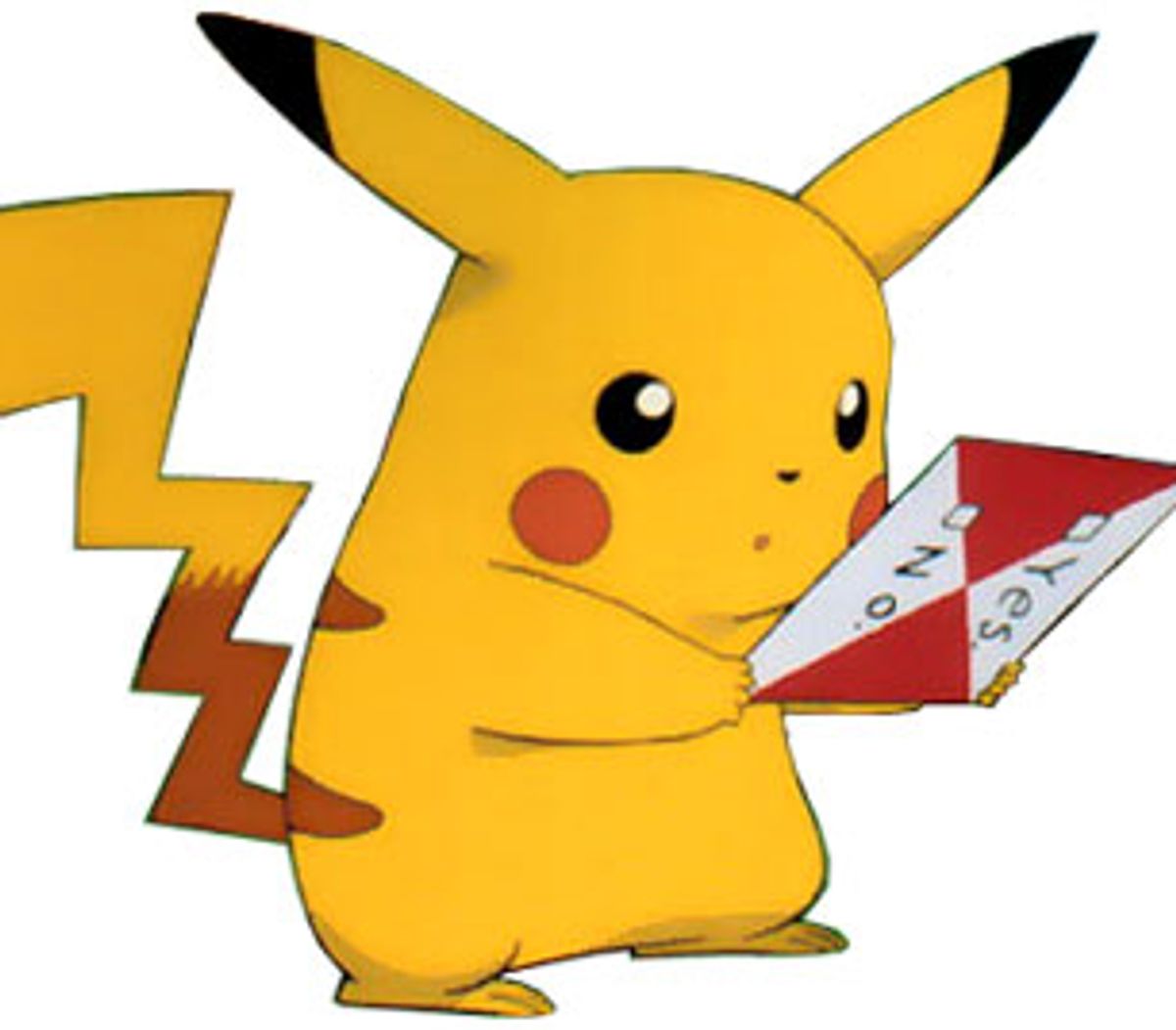 In the opening scenes of "Pokimon: The First Movie,"
an entire island goes up in smoke. Fires rage. Humans
run for cover. Mewtwo, the most powerful Pokimon in
the world, is having an identity crisis. Engineered
from ancient Pokimon DNA, this rampaging catlike
Pokenstein has no purpose beyond serving as a specimen for scientific study.
That makes him really mad. After all, hostile Pokimon
with malicious psychic powers have feelings, too. So
Mewtwo decides to destroy all humans, enslave all
Pokimon and take over the world. But our fearless
heroes, Ash, Misty and Brock, and their loyal
Pokimon -- Pikachu, Squirtle, Bulbasaur and others --
find a way to save the day.

Seventy-six minutes, 151 fantastically mutated
animal-like monsters and five expert points of view
later, I'm still not sure I really get the
whole Pokimon thing. But I'm an adult, so it doesn't
really matter. Now my five experts, they matter -- and
they had plenty to praise and dis about "Pokimon: The
First Movie."

Joey Talbot, 9, thought the movie was pretty cool,
although the ending was too predictable. Nora Walsh-DeVries,
also 9, called the film "hella tight," but would have
liked to see more blood and guts. The special effects
were a highlight for 9-year-old Logan Weir, while
Walker, his twin brother, loved seeing the Pokimon
fight each other. Refusing to kowtow to pop culture,
Sydney Benfer, 10, thought the movie was only "OK" and
that Pikachu -- a chortling, red-cheeked, yellow fuzz
ball of a mouse -- was ugly. Blasphemy.

"Pokimon: The First Movie" uses the ruse of good
vs. evil to show that fighting is wrong and, as one
character put it, "Real strength comes from the
heart." Our five savvy critics spotted the clichi
right away, and one announced he was ready
for a little realism in kids' movies. Wake up,
Hollywood: Kids don't fall for happy endings.

There's plenty of violence in the movie, but it's the
beat-'em-up kind rather than the blow-'em-up kind.
Still, I felt a little squeamish when Pikachu
was being slapped silly by his more powerful clone. I
know Pokimon never die in battle -- they just faint
until you revive them -- but I still felt bad for the
little guy. The kids weren't bothered by the fighting
at all. Nothing, they said, could be as gross as the
chicken feet they had to dissect in class that day.

Here's more from our five critics on "Pokimon: The
First Movie":

What did you hear about the movie before you went to
see it?

Sydney: That they gave out cards.

Joey: I heard that they were selling cards, but I never
believed it. I was like, Oh my God, no it's not
true.

Nora: We're going to take the cards to school ...

What did you think of the movie?

Walker: I think the ending was good, when all the Pokimon
were fighting, and then when all the tears were coming
in from a bird's-eye view and you see all these little
specks of light going into Ash. But then after that,
when the narrator was talking, at the very ending, I
thought that part was kind of dumb.

Sydney: I thought it was OK, better than I expected.

Logan: It was on a good subject and it was good
animation ...

Nora: It was horrible animation! When they talk they
don't move!

Logan: Well, I like Japanese animation mostly. I think
it's cool and I also liked the special effects, when
all the tears were going into Ash and Mewtwo and Mew
were bouncing off each other.

Were you worried at the end when Ash [the hero] was
turned to stone?

Joey: Not really because usually all the kid movies
always have a good ending and it's not really freaky.

Logan: We knew he was coming back to life.

Joey: 'Cause he's the main character.

Logan: The main character never dies. I wish he'd really
turned to stone because I don't really like the
humans. I just like the Pokimon; they're the only cool
ones.

Nora: They [the humans] have nothing to do with Pokimon.
They just stand there. They're not good trainers, they
only fight Pokimon.

Joey: I disagree. I think that the humans are very cool
because without the humans, the Pokimon wouldn't be
fighting because no one would have captured them.

Nora: Then they [Pokimon] could just fight wildly; that
would be cool.

Walker: Yeah, that would be cool.

What was your favorite part of the movie?

Walker: I had two favorite parts. One, when [Mewtwo] was
in the lab and he blows everything up, and the other is
when all the Pokimon doubles are fighting the
originals. I thought the special effects were really
good, like when Mew and Mewtwo are in those balls and
they're crashing into each other.

Logan: Yeah, it was.

Walker: I think the lamest part was kind of the
introduction and everything. When the narrator says,
"This is a mystical tale" and "I do not know who I am.
I was not meant to be here." [Walker mimics Vincent
Price.]

Logan: I thought it was sort of good, but not the best. I
give it two stars because some of it was sort of dorky
because the really weak Pokimon beat the real powerful
Pokimon. But it's also really cool. My favorite part was when
Mew and Mewtwo were fighting. But I don't like tragic
parts, like "Oh boo hoo hoo hoo," when the Pokimon
were crying.

Why were Mewtwo's powerful Pokimon, the bad guys in
the movie, also crying when Ash was turned to stone?

Joey: They realize that fighting is wrong ...

Joey: They see how the other Pokimon, how emotional they
got and how hurt they were getting.

Did you think it was kind of violent?

Walker: Well, if Pokimon were real, it would be a violent
movie, but ...

Nora: Pokimon aren't real, so it's violent, but it's
hella tight.

Joey: I don't think Pokimon is violent because it's not
one of the those shows like, Oh you're dead. Wow.
Boom! Boom! Boom! Boom! I have a machine gun! It's
not like their guts are exploding and blowing up and
you're shooting back. It wasn't like you were
dissecting chickens.

Nora: That's what we did today. We dissected chicken
feet!

Nora: It was tight because we were pulling the tendons.

Walker: And when we pulled one tendon one of the toes
moved, then the other and the other one moved.

Joey: Actually it was pretty similar to Nora's foot.

Nora: Actually, I think it was pretty similar to Joey's
brain!

OK, let's go back to the movie. If you could make
another Pokimon movie, what would it be like?

Nora: ... everybody would die and the movie would end.

Nora: Everybody would die!

Logan: I would make it sort of like actiony, like there's
some Pokimon fighting, and not all tragedy, but a
little tiny ounce of tragedy. It would have a little
tiny bit of everything. I would try to make it about
the same thing that they made the Pokimon movie
[about] because I thought that was a good subject.

Walker: My movie would be three hours long and what would
happen is, it would be the same idea: Mewtwo and Mew
are fighting and all 150 Pokimon are fighting
each other and then the same thing would happen. Then
all the Pokimon, even the bad ones, would go against
Mewtwo and destroy him. Then he would come back to
life and they would be friends, instead of that stupid
ending with the crying and no one remembers what
happened.

It's like always the same thing every movie. It, like,
starts to get boring. I would make it that Mewtwo
would turn good but maybe it should be a little more
tragic, like Brock loses one of his Pokimon or a
character dies.

But that's the thing about Pokimon, they never die,
right?

Joey: Yeah, so that's why it should be different. They
wouldn't expect it. They'd be like, oh, this is a good
ending.

What did you think the movie was trying to say? Did
you learn something from it?

Logan: I learned that fighting's bad.

In the end, the humans forget that they even met
Mewtwo or went to New Island. What did you think of
that ending?

Nora: That was stupid. I mean now they're never going to
remember about Mewtwo.

Joey: I think they should remember it because, like,
maybe they can tell it to their grandkids and have a
big story around the fire.

Logan: It would be a legend.

Joey: Then they'd have proof of it from other people.

Walker: And be popular.