I wanted to be a millionaire

In which our hero braves technical difficulties, arctic temperatures and too many geography questions in his quest for a fast fortune. 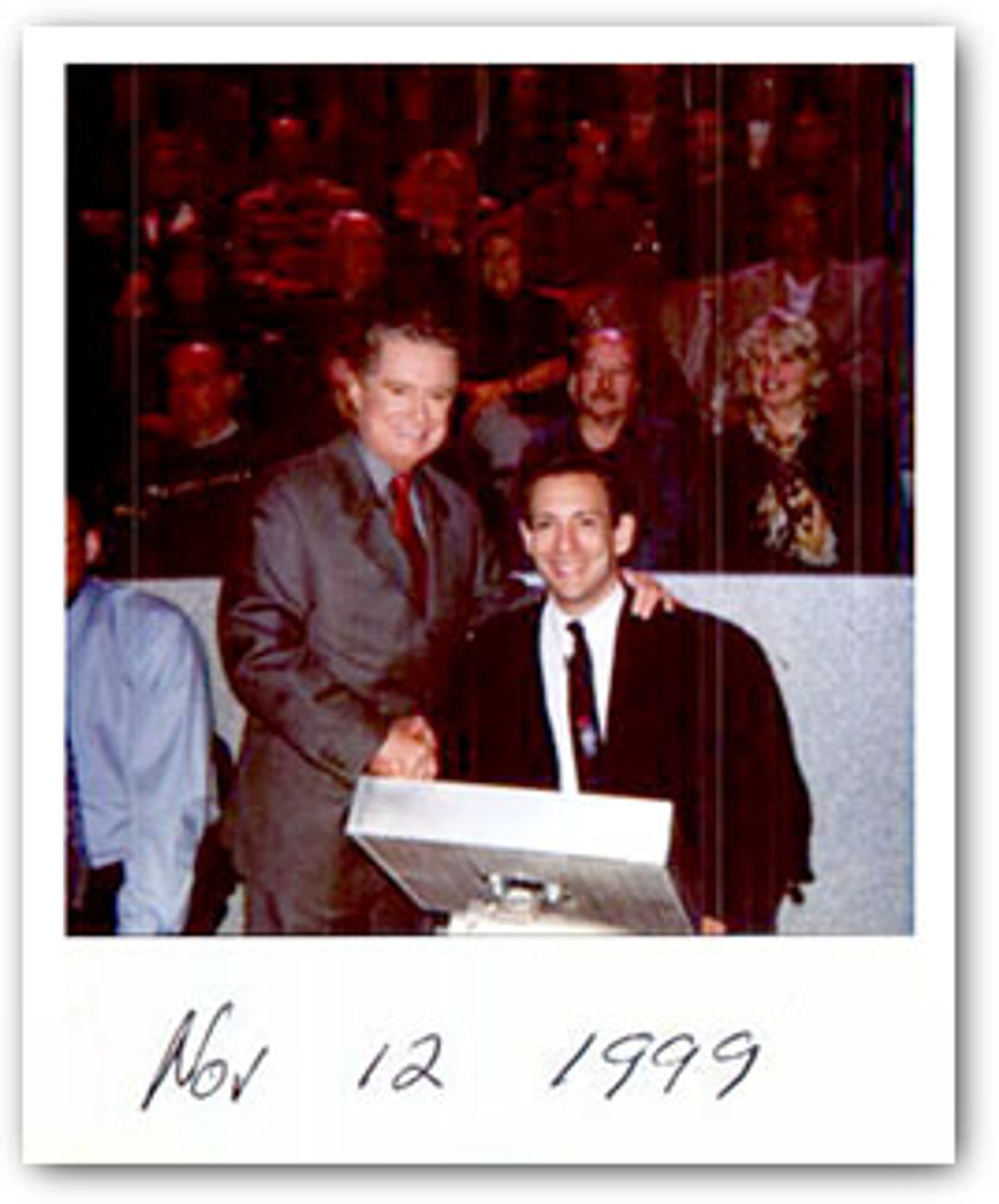 Put these types of headaches in order from least severe to most severe: a) migraine; b) sinus; c) cluster; d) tension. No matter how you rank them, I have them all after being a contestant on "Who Wants to Be a Millionaire."

Everyone gathers in a room in the Empire Hotel. The lovely and mercurial Susan, contestant greeter, informs us that we will be taking a van four blocks to the studio. We are 10 contestants, two alternates and sundry "companions." The van ride provides some insight into how numerous clowns fit into a Volkswagen.

We arrive at the studio and are escorted through tunnels, steps and several security points en route to "the green room." We are warned along the way not to speak to any ABC employees other than those displaying official "Who Wants to Be a Millionaire" tags. We are then sequestered in a room where J.P., a guy with a headset, welcomes us to a nice spread of donuts, coffee and bagels. A woman named T. tells us that we will be meeting our assigned producer shortly for an interview. Even their names are expedient.

My mother, whom I've chosen as my companion, is having a bad morning. She is coughing and feeling dizzy. I have obtained permission for my sister to be my companion's companion. Thank God for guilt-ridden children.

I meet my producer, Lisa, while my mother and sister put a schmear on some bagels. I tell Lisa my life story in 10 minutes. My mother is treated to the life stories of the contestants to her right and left as they are drilled by their producers. I take a moment to suss out the competition.

The first guy I meet is Mike. He is the holdover from the night before. He had reached the $8,000 level when time ran out. He holds his wife's hand as he tells me that he has only one "lifeline" left and is not very good in science and pop culture. (Lifelines are phone calls which you're allowed to make to friends to get their help in answering Regis' questions.) Mike wants a sports question. He is a bit edgy. It is only noon and we still have six hours to go before taping.

Next I meet Andy, who was a "Fast Fingers" contestant in August. ("Fast Fingers" is the game that gets you to the hot spot chair.) Wow! You get a second chance! He points out Bruce, who was also a "Fast Fingers" contestant in August. Back then, ABC hadn't finalized the rules yet because they didn't know whether the show would continue. Officially, contestants are now allowed to be in the top 10 twice in two years. These two guys, because of their appearance on the show before the rules were written in stone, get three tries. Then there's Rick, who resembles Edward Norton and is a former "Jeopardy!" champion. My mother is impressed. She watches "Jeopardy!" religiously.

My life story is abruptly cut short when J.P. and T. inform us that we are going to watch an episode of the show to give us an idea of how what a "good " contestant is like. They tell us to remember that "We are the show!" Watching video takes another half-hour.

As the tape ends our small army of producers return to the room. We are given our "Fast Fingers" seat numbers. I am number 10. We are to line up in order in single file and remain in formation for the rest of the day. The two alternates are side by side behind me. I jokingly tell them not to push me down the stairs (I have seen "All About Eve.") Celeste, who has come from a town of 200 in Utah where it took five hours just to drive to the nearest airport tells me not to worry. I wonder if she has what it takes to win.

We are warned that it is very cold in the studio to keep all the lights and computer equipment from overheating. Everyone is joking, "Who wants to be in a Frigidaire!" We take our assigned "Fast Finger" seats and our companions take their seats in the audience. They weren't kidding about it being cold. I am wearing a sweater but start to tremble. All I can think about is my mother getting pneumonia from me wanting to be a millionaire. It doesn't seem right, somehow.

Michael Davies, the producer of the show, comes in to the studio to greet us. He gives us a 40 minute pep talk. He tells us how he created the show, and that it is going all over the world. In fact there is a gaggle of Canadian television people in the rehearsal audience who are here to see how it is done -- and perhaps buy into the franchise.

I am getting colder. My teeth are chattering. It's time for the "Fast Fingers" rehearsal. My hands are frozen into claws. My screen is hard to read. On the practice round, I tank. Andy, the guy who participated in August, gets all the ordering in lightning speed. I'm in big trouble. Oh well, time for hair and make up!

There is a locker room mentality in the changing room. We all wish each other luck. I put my hands on some light bulbs to warm them up as a producer named Brett looks on, and asks me what it is like to be a writer in New York. Not as tough as quickly and correctly punching in those "Fast Finger" answers with rigid hands and a dim screen. I hope they don't ask geography questions. It's my worst subject.

We are dressed. I'm looking great and the feeling has briefly returned to my hands. It is time for the show. As we are led back up to the Fridgidaire, Regis stands offstage and greets us. With his impish swagger, sharp gray suit and blood red tie, he isRegis Philbin.

And the show begins. Mike picks up from where he left off yesterday. His first question: In biology, what does the double helix structure represent? a) DNA; b) red blood cells; c) RNA; d) amniotic fluid. Mike is stumped. With his one lifeline left, he decides to call his stepfather who is a doctor. Immediately, his stepfather tells him the answer is a) DNA. Mike makes it to the S64,000 level only to be foiled by another science question, ("What animal is represented on the Caduceus?") He opts to take his money and run. (The answer was the snake.)

Time for "Fast Fingers." I start blowing on my hands to warm them up. But this is a one-set show, which means the computerized double chair that Regis and the contestant sit in has to be unplugged and taken off-stage to prepare it for a new contestant. It takes 15 minutes before we are ready to go.

Finally, the music starts to hum, the lights starts to sway and Regis booms, "Put these Canadian cities in order from west to east." Damn! Geography! And Canadian to boot! I am dead in the water. I press any four buttons as fast as I can and pray. And wonder if they did this to butter up the Canadian television people. You know, make them feel included.

Andy gets it right in the second highest speed ever. I sit through his questions hoping for another shot at "Fast Fingers."

Andy is 23 years old and attends Johns Hopkins. He has a car with a 143,000 miles on it. He is good at geography, history and sports, but bad at pop culture. This is not his lucky day. "Who won an Emmy for their performance on the last show that Johnnie Carson hosted?" (He calls a friend who tells him the answer is Bette Midler) "Which lifestyle entrepreneur went public with her company in October, earning a billion dollars?" (He opts for audience help and learns it is Martha Stewart.)

And then the killer: "Which actress did not play Rizzo in Grease on Broadway? a) Courtney Cox; b) Rosie O'Donnell, c) Lucy Lawless; d) Brooke Shields." Andy falters. He has no clue. He has used all his lifelines. Andy is dead meat.

After 15 extra minutes due to technical difficulties, we are on the air. The lights, the music, the whole deal all over again. I focus on my stiff digits. Then Regis says, "Put these television shows in order from the cities they are set in from west to east." Another disguised geography question. I curse large land masses.

The "Jeopardy!" champion, Rick, trots over to the hot seat. Rick is like Andy. Good in geography, history and sports but not very hip at pop culture. He reaches the $64,000 level, but uses up all his lifelines. It's 8:30 p.m. My time is running out. I don't wish bad things on other people, but hell, I'm on a game show. For $125,000 Regis asks Rick, "Which one of these people was a founding member of the Rolling Stones? Was it a) Brian Jones; b) Jeff Beck; c) Ron Wood; or d) Jimmy Page.

Rick is plagued by doubt. He has no lifelines left. He is almost certain that the answer is Brian Jones, but isn't sure whether to stake it all on a guess. Then he goes for it. He takes the plunge. "A) Brian Jones," he says. Regis fixes him with his trademark "I'm worried about you" stare. He looks extremely concerned for Rick. "Is that your final answer?" Regis asks solemnly. Unsure of his answer, Rick crumbles. He decides to stop at $64,000.

Rick gets his fake check for $64,000 as we are all informed the correct answer was -- technical glitch. Producers and stagehands are in a flurry.
Rick's humiliating defeat will have to be dramatized. The audience is told not to not overact as we reenact our disappointment. It's all very sad for Rick.

One more "Fast Fingers" round! Yahoo!

And the question is: "Put these non-fiction books in order according to their publication dates, from earliest to most recent." a) "Angela's Ashes"; b) "Private Parts"; c) "In Cold Blood"; and d) "Roots." I know this one! I punch in my answer and celebrate for one infinitesimal moment -- and then I realize -- I didn't punch in OK. I didn't punch in OK!! Punch again! OK! OK! OK! Two others beat me to it.

Tom, an international banker who is fluent in Italian, will be the next contestant. Then the horn sounded. The game was over.

What does it feel like to come so close and not go all the way? A bit of
disappointment, a bit of despair. Hard to look your companion and your companion's companion afterward. No chance to sit opposite Regis. Time to go silently into the night.

Exhausted and coming down from an adrenaline high, I made sure my sister and my mother got their limo back to Long Island. Instead of calling ABC to get my courtesy car home, I decided to take a cab.

Was it worth it? Of course! Would I do it again? Sure -- for a million bucks!

Steven Scott Smith is a journalist and playwright in New York.