As Egyptians protest the move toward a criminal probe, reports emerge that a crew member said a prayer and plunged the plane into the ocean. 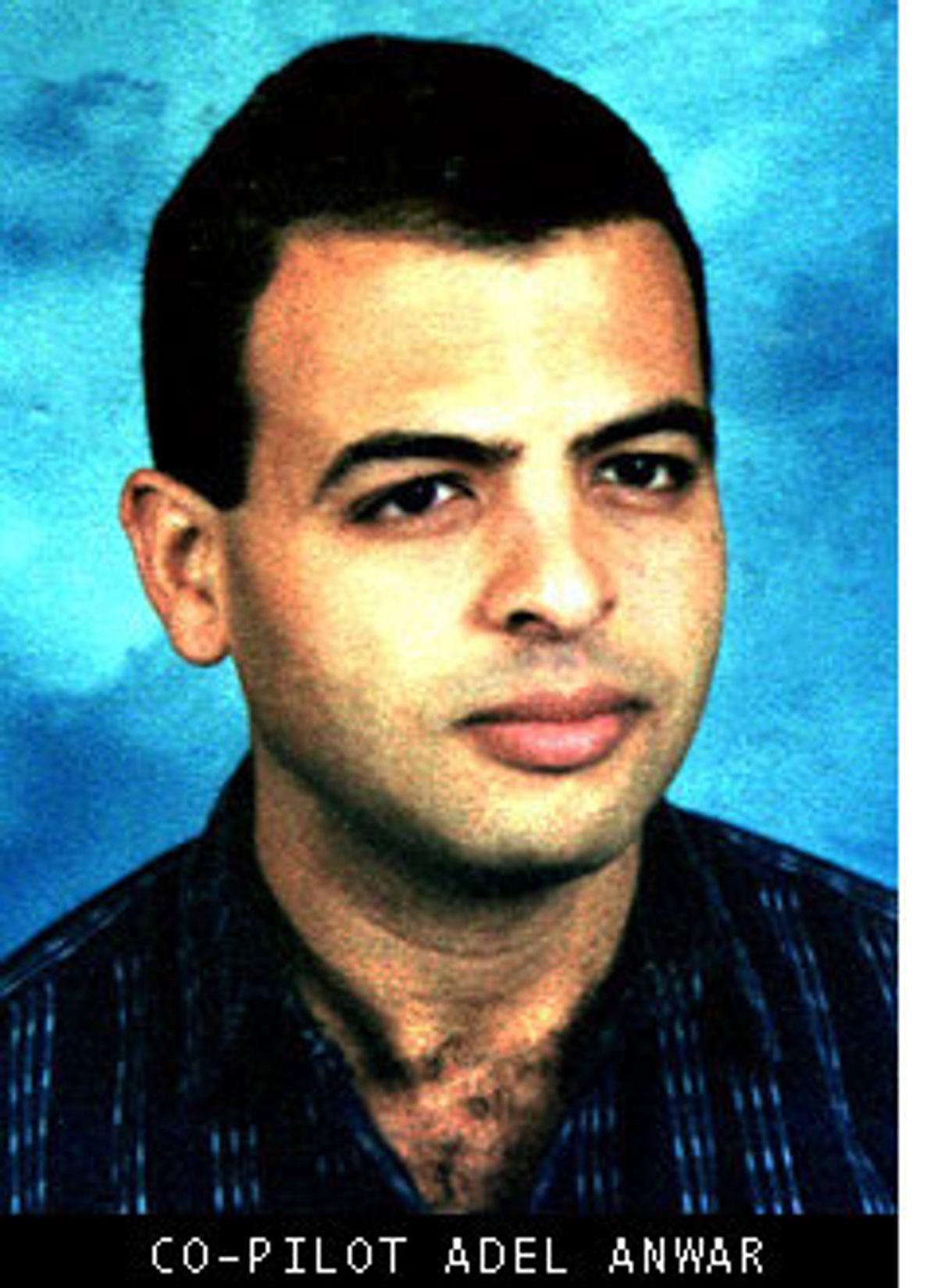 Investigators now believe an EgyptAir Flight 990 relief pilot took control of the plane and deliberately dived it into the Atlantic Ocean, killing all 217 people aboard.

The New York Times reported late Tuesday night that "a detailed analysis of the voice and data recorders aboard Flight 990 indicates that a crew member, possibly a relief pilot, was responsible" for the crash.

According to the Times, the suspect, relief pilot Gamil al-Batouti, a 59-year-old, veteran EgyptAir employee, uttered "Tawakilt
ala Allah," which is roughly translated as "I put my faith in
God"or "I entrust myself to God," before diving the plane toward the ocean.

The Times said government officials believe the plane's captain, Ahmed al-Habashi, had left the cockpit and struggled in vain upon his return to take back control. The crew member originally believed to have uttered the prayer, Adel Anwar, was on board, but not in the cockpit, officials said.

The revelation came after a day of confusion. Earlier Tuesday, National Transportation Safety Board delayed plans to turn over leadership of the EgyptAir crash investigation to the FBI, because of concerns by Egyptian government officials that such a move indicated that criminal activity is suspected.

News organizations, including CNN, reported that the Egyptian government is "extremely sensitive" to the decision to label the investigation criminal, according to officials close to the probe.

At a news conference late Tuesday afternoon, NTSB Chairman Jim Hall said that additional Egyptian authorities and experts would join the investigation to "process and analyze" information related to the crash.

U.S.-Egypt cooperation may be necessary, but it could also slow down the investigation. "The U.S. and Egypt work closely together, but the teams involved sometimes don't work out well," said Anthony Cordesman, senior fellow and co-director of the Middle East Program at the Center for Strategic and International Studies. "It took the FBI a long time to put an effective team together in Saudi Arabia" after a 1996 bombing at Khobar Towers that killed 19 airmen.

"Many of the [FBI] who initially went in were not particularly competent," Cordesman added. "They spoiled a relationship that had worked well between the CIA and Saudi intelligence and the FBI was much of the problem during the early investigation."

The planned shift to the FBI followed an article in Tuesday's Washington Post that, just before shutting off the plane's autopilot and sending it into a catastrophic plunge, one of the plane's pilots uttered a Muslim prayer in Arabic.

The information, extracted from the plane's recently recovered cockpit voice recorder, also included what is described as the sound of a door opening more than once. A source also told the paper that the plane's captain had left the cockpit -- leaving the other pilot alone -- and returned just as the plane began its dive into the sea.
Sources would not confirm the actual words of the prayer, but MSNBC reported Tuesday that it could be loosely translated as "I put my life in your hands." Investigators stressed that it is not known whether the prayer was related to the cause of the crash, noting that Arabic speakers frequently make references to God in everyday speech.

The BBC reported Tuesday that the pilot left the cockpit shortly before the prayer was uttered, and that when he returned, he said "What is going on?" When he took back the controls, the BBC reports that he ordered the co-pilot, "Pull with me, pull with me," apparently attempting to recover the plane from its steep dive.

"We're working to try to determine exactly the words that were spoken. We are prepared to continue with that process ... with additional resources and individuals from the Egyptian government in the United States in the next couple of days to assist with that effort," Hall said.

The agency has refused to release transcripts -- in Arabic or English -- of the cockpit voice recorder to the media.

Hall said he met again Tuesday with FBI Director Louis Freeh, who agreed that investigation should not be transferred until the Egyptian authorities had a chance to review all materials related to the crash.

The Associated Press reported late Tuesday that investigators had synchronized the flight data recorder and the cockpit voice recorder and had discovered that a pilot uttered the prayer just before the autopilot was disengaged and the plane began to fall.

NTSB's Hall, however, said he won't be able to confirm that the synchronization has occurred until Egyptian officials have a chance to review the data from both recorders.

Tuesday's Washington Post reported that the "disturbing" discovery of the pilot's absence, the co-pilot's prayer and the plane's sudden plunge led NTSB's Hall to call a meeting on Monday with Freeh in which the two discussed transferring jurisdiction over the investigation to the FBI.

Among other developments in the case, the FBI and NTSB have requested that the U.S. Navy Supervisor of Salvage contract a large ship with heavy lifting capability that can be used to raise the cockpit and other parts of the crashed plane crucial to the investigation. Only two such ships exist in the United States.

The investigation at the accident site off Nantucket Island has been hampered in recent days by poor weather and visibility, but better weather is expected later this week.

Additionally, Hall told reporters, "We have so far found no sign of a mechanical or weather-related event that could have caused this accident."

A team of experts continues to review the tapes at an NTSB lab in Washington to determine the relationship between mechanical events and the information on the cockpit voice recorder. Hall would not comment on the expected time line for completion of the analysis, but he remained optimistic that it would yield answers.

Language experts are also cautiously translating the contents of the cockpit tape, which are in Arabic, to determine whether or not the pilot's quote was, as is alleged, a prayer.

"Because of the quality and the extensive information contained on the flight data recorder, I am confident that many of the questions we have, you have and the individuals following this investigation around the world have, will be answered," Hall said.

The investigation team also includes representatives from Egypt, the Federal Aviation Administration, Boeing Co. and the engine manufacturer, Pratt & Whitney. Hall bristled at a question about how much influence Boeing has over the investigation.

At each step, clues from the crash have only raised more questions and have done little to rule out any theory -- be it accident or sabotage.

The FBI has conducted interviews with EgyptAir staff and family members of the pilots, each of whom had recently passed mental and physical evaluations done by the airline. The Boston Herald reported last week that a crew member had placed an ominous call to his wife before takeoff, saying there was "something wrong with the plane," and that he was "very worried."

Meanwhile, in Egypt, conspiracy theories and angry suspicions are circulating about the crash.

The South China Morning Post reported Monday that EgyptAir officials are angry that the investigation has focused on the pilots' mental health, and that they believe the black-box data "points to sabotage." The report quotes Essam Ahmed, former head of EgyptAir's committee in charge of investigating crashes, as saying that the pilots were trained to glide an aircraft down if the engines stopped. Ahmed suggested the possibility that a bomb was planted in the toilet behind the cockpit, a scenario that the U.S. investigation has not ruled out.

On Tuesday, the AP quoted veteran EgyptAir pilot Yusry Hamid rejecting pilot sabotage as the cause of the crash. Hamid has flown the New York-to-Cairo route often and said of the pilots, "I know them very well." He suggested that co-pilot Anwar was responding to an emergency caused "possibly by an explosion, possibly by a missile or some mysterious thing." As for the widely reported prayer, Hamid insisted, "Any pilot who sees he is heading toward trouble will say religious prayers, whether he is a Muslim or a Christian."

The Middle East Times reports that the editor in chief of "conspiracy-minded" official Egyptian newspaper Al Gomhuriya published an editorial on Nov. 6 accusing the U.S. military of bringing down the plane with missiles.