I wrote a novel in three days

A guy, his best pal and a bottle of tequila. It was a recipe for literary greatness. 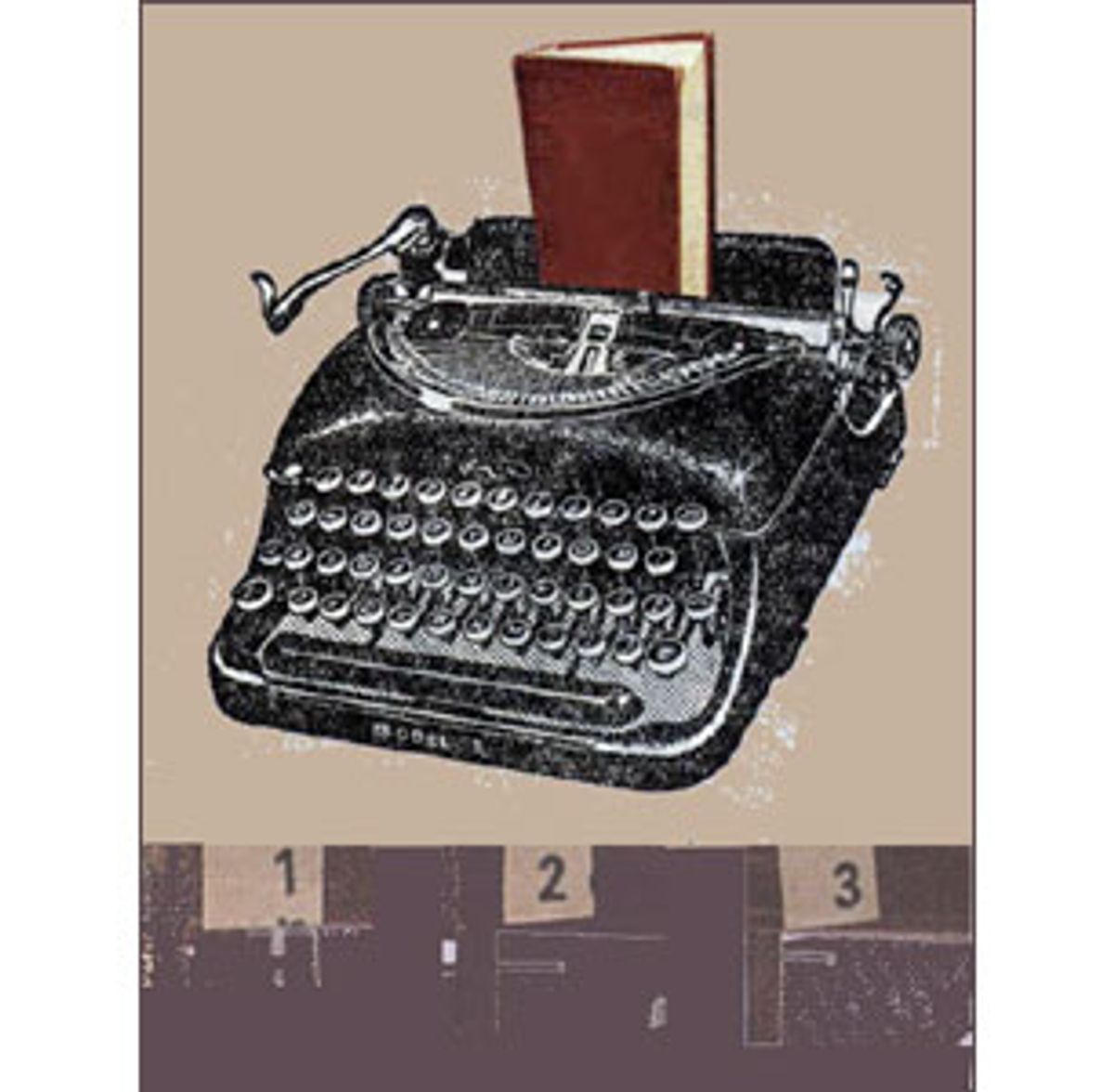 For years, my friend Mark Cirino and I had bantered about this crazy idea for a story: What if J.D. Salinger wrote a new manuscript? What would happen if an A-list Hollywood actor and a stuffy English professor teamed up to break into Salinger's house and steal it? It was one of those great projects we knew we'd never have time to actually do.

Then I stumbled across Anvil Press' Web site and noticed a blurb about a "Three-Day Novel Contest." "The event began as a joke," the page proclaimed, "became a dare, and has now become a literary institution." It was perfect. We'd write "J.D." in one long weekend, do or die. It would be like Sir Mallory and his Everest, Earhart and her Atlantic, Captain Ahab and his Dick.

Hoping to sniff out our competition, I queried Brian Kaufman, Anvil Press' managing editor. Turns out over 400 people entered last year's competition, though "we usually lose 10 to 15 percent by the time the dust settles." Since the contest works on the honor system, and since I'm a cynical bastard, I expected roughly 50 percent of our opponents would be cheaters -- people who had old novels sitting around the house and figured they'd just ship 'em on in. But the publisher was in Vancouver and most of the entrants Canadian, so maybe it wouldn't be as bad as that. Everyone knows Canadians are more honest than Americans.

I did the math. Eight words per minute head to head against 350 hacks, loons and pedants. The grand prize was an offer of publication. The first runner-up snagged a hefty $500. That's in Canadian dollars, baby.

Base Camp: One week prior

Writing with a partner is like driving cross-country using the same steering wheel -- sure, the other guy'll pay for half the gas, but will anybody really get anywhere? But I wasn't too worried. Author of "Name the Baby," Mark has been my best friend since we caught each other sneering at the professor during our college writing workshop. We've collaborated on songs, soap operas and screenplays and have edited each other's novels down to the bone.

According to official contest rules, you're allowed to outline your novel before the Labor Day weekend
gantlet. So we ordered two large pizzas and scrawled out the plot. For the next few days we waded through it. We couldn't tell which had more sludge -- the Thai iced coffees we were draining by the dozens or our poor, limping outline. Neither of us dared admit that the story had more hole than donut.

False confidence is the novelist's only friend. By Friday afternoon we were sure we had crafted something great. It would be a blues jam of a book that would make Kerouac's manic prose look dainty. Everything until now -- the hours of discipline, the rejection notes, the girlfriends we'd scared off with our neurotic self-obsession, the lucrative careers we'd avoided -- was only preparation for this moment.

At precisely 12:01 a.m. we would clink shot glasses and down a quick bullet of tequila. We'd read the last paragraph of "The Great Gatsby" as our incantation. Then we'd write like lunatics until the sun rose.

Delayed by a family emergency, I walked in my door at 11:55 p.m. Mark and I had decided to spend the night in our separate apartments, communicating via modem. But there was a problem with my Internet connection. After fumbling with drivers and cables, we finally hooked up at 12:19. Nineteen minutes behind schedule. Thanks a lot, Microsoft.

I cracked my fingers and typed the title: "J.D.," I typed, "a novel by" followed by our names. Then I put his name first. Then I reversed them. It wasn't until 1 a.m. that I jumbled enough words together to form the foundation upon which the rest would teeter:

"Surely a human life is worth more than a novel."

Now for sentence No. 2, which in many ways is even more important. It must fulfill the promise ...

At almost 3 o'clock, we e-mailed each other our efforts. It was a defining moment. Would the two chapters meld together like stripes of plaid or would they be a painful mess of inconsistency, redundancy and inanity, like a poor man's "Finnegan's Wake"? My eyes hungrily bounced along his text. Some lines were so delicious they made me want to retire. Others, so preposterous ... they made me want to retire. "Looks great," was all I told him. Thirty-eight more chapters to go. At this rate, there was no way we were going to make it.

As I collapsed into bed, Mark phoned. He said my first chapter was awesome, brilliant, perfect. "Except one thing ..."

Each muscle in my body throbbed in a different key of tiredness. "I don't even remember what the hell I wrote anymore," I snapped.

There was a pause. "We'll figure it out tomorrow."

The only good thing about a three-day contest was that it would be over in three days.

"J.D." sentences continued writing themselves on the parchment of my shut eyelids. The hamster wheel in my head kept spiraling. Every few minutes, I rolled over and jotted down a note. After a few hours of the old toss-turn, I poured a glass of wine. It only made my mouth taste like vinegar and my guts writhe. The ache traveled to my heart and then to my head.

I looked at the clock -- 5:03 -- and reached that point where you just look forward to morning so you have an excuse to stop faking sleep. Finally, I rolled off the torture-rack at 7. I glanced at myself in the bathroom mirror, and my eyes were so red they seemed sunburned.

Mark arrived at around 10, lugging two Big Gulp-size vats of coffee, and I almost hugged him. But this was no time for male bonding. We formulated a triage battle plan. One hour per chapter, max. No going back to rethink structure. No proofreading. "Normally I expect diamonds from you," Mark said, pacing like Gen. Patton. "Now all I demand is the cold, hard text."

I wrote like a fiend. Tiredness flowed numbly through my veins like molasses. I typed, "Hills and dales," about 20 times. I highlighted the text, deleted, just to keep my fingers moving, hoping my brain would follow suit. Somehow, pages filled themselves. And then, without prelude, twilight descended. We skidded to a finish. We looked at each other, dazed, unbelieving. We'd just output about 60 pages. We promised each other we'd edit the whole mess later.

He went home to watch a Mets game. I rented a bad Billy Baldwin video. Neither of us ended up editing a single thing.

My body learned to siphon all its energy directly from my brain to my fingertips, ignoring everything in between. I hunched at a desk, then reclined against the futon, then slumped on the floor. My spine felt like a Red Lobster crab leg. If we only won second prize with this thing, my half of the loot would just about cover the first chiropractic session.

Every time I reached an apex, Mark did something to shatter my crystal sphere of concentration. He was an endless polka of annoying little spot edits, random laughs out of nowhere, CD changes, chapter number confusions. Then I reached a bottleneck. I needed to know the name of the Cornish, N.H., baseball field -- the setting of the novel's denouement. I asked him, "Say ..."

He held up a finger without turning to look. "Dude, you're kind of annoying me." He slipped on his headphones.

He finished his chapter and jogged around my studio apartment like a madman. He ranted, psyching himself up, "This is a game! Our work was done weeks ago with the outline, man. This is typing, kid. Not writing. Easy!"

He shadowboxed against the wall. He shadowboxed against my face. We started on one of our legendary conversations, talking about everything from the nature of art to the physics of a football kick. I glimpsed the clock -- 40 minutes of non-writing had passed. "Hey," I said, "we should get back to it. We're not here for fun." He moped back to his laptop. Would this novel be worth tarnishing our friendship? It was one of many big questions we had no time to consider.

I spent three hours on a two-page chapter, capturing the feel of a big-time Italian fashion shoot in a small New Hampshire town. But my dawdling was inexcusable. I vowed to go double-speed and sprinted ahead, then glared impatiently at Mark until he finished.

"I can't believe we did it," I said, reading his output. "This is good stuff."

Mark shrugged. "So far, we just took the girl to the dance."

Never has a day been more aptly named. We quibbled over word choices, plot twists. We were mutilating each other's work. Every subtle difference in our world perception was tested. I didn't want to argue. But it was obvious -- if we did it my way, the book would be a realistic, mournful slice of Americana. If we went his direction, it would become a joyless cartoon.

We butted heads until, as if dropped to two starving mongrels by some capricious muse, an entirely unrelated solution found its way into our pages. Mark ran through the text like a crazed savage with a machete. I was close behind with my steamroller. We paved a road through the wilds of the subconscious. We high-fived. Suddenly I realized there was nothing else I would rather be doing this Labor Day. No final summer beach trip or veggie-burger barbecue or scenic foliage drive or TV sports marathon could compare -- dirty in the trenches with my best mate, alert, focused ... alive.

A little past 9 p.m., Mark let my thumb piggyback on his finger as he tapped the novel's final period. We'd talked about going to the local bar and downing enough tequila to drown ourselves. But our constitutions were too wobbly to mess with anything that had a worm at the bottom. We went out for a mellow meal of celebratory sushi.

"Do you realize, lad, that these days of youthful energy will never happen again for us?" I asked, raising my water glass.

"I fucking hope not."

The Descent: The day after

Tuesday morning I woke up disoriented, my fingers still twitching. I took a long, warm shower and shaved my three-day growth of stubble.

No childbirth, no red-carpet Hollywood premiere, could equal the joy of seeing a laser printer spit out the slick black rows of a freshly completed novel. The musk of the toner, the warmth of the paper -- it was almost sexual. I gathered the pages into a ream and packaged them in a manuscript box. Mark and I met for coffee. We blessed the box, stamping it with our cups -- two overlapping muddy rings. Not that we gave a whit about the contest anymore, but off to Canada it flew.

What we had accomplished was not winning a marathon or climbing a mountain or spearing a whale. It had no measure. Of course, a monkey or a computer program could write a "novel" in even less time, but what if, as part of me suspected, "J.D." was actually a beautiful little read? The implications were frightening. What did that say about the plodding Tom Wolfes and Thomas Pynchons and, yes, J.D. Salingers of this world? Did it make them whining, temperamental, lazy put-offers as well as great artists? And what did it say about my own novels, my own years of posturing and sentence-twiddling and adjective-niggling?

Anvil Press will judge our novel. With a bit of luck, posterity will judge it, too. Perhaps this noble effort will catch fire and transform us into the literary giants of our generation. Until then, though, I've got to snag some sleep.