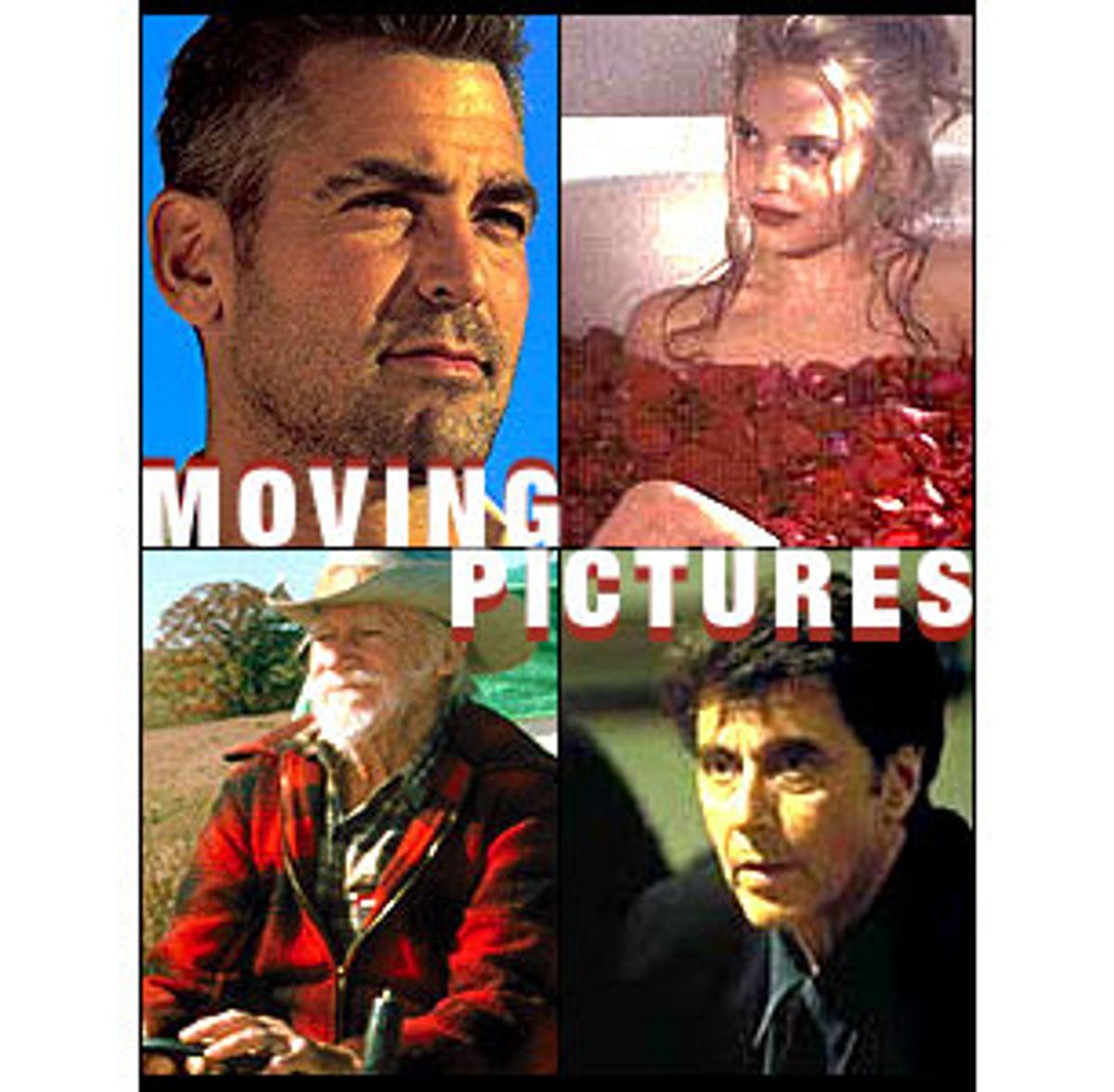 My mother telephoned the other day and asked me how I was and without even thinking I exclaimed, "Great! Movies are so good right now!" She gingerly hinted at wanting more personal details regarding my (contented, thank you very much) daily grind. But at the risk of sounding too society-of-the-spectacle, nothing in real life has thrilled me in the last few weeks quite like the moment in "Three Kings" when a jeep darts across the desert to the Beach Boys' "I Get Around"; or grabbed me like the landscape of Richard Farnsworth's face in David Lynch's "The Straight Story"; or captivated me like that floating bag sequence in "American Beauty"; or cracked me up like Terence Stamp's Joe Strummer snarl in "The Limey"; or made my stomach hurt as much as "The Insider's" ulcer-in-residence Russell Crowe; or -- despite recent river cruises and coast-to-coast flights -- taken me on a ride as scenic as "Being John Malkovich."

I have been more moved at the movies in the past eight weeks than I have been in the past eight years. And I've been wracking my brain for days and days trying to figure out if this spate of greats is some kind of fluke. Economically, the coincidence might be chalked up to the rise of independent film and a subsequent independent spirit forced onto the movie studios within the last three decades. (When the Disney logo appeared on "The Straight Story's" opening credits, something no one ever expected from a David Lynch film, the audience in the theater where I saw it laughed.)

But spiritually, the last 30-plus years of truth and beauty in this country have been defined by those old standbys: Vietnam and rock 'n' roll. And in the age of Bill Clinton -- the first president to personify our fear and trembling at Vietnam's chaos as well as the first president to have a favorite Beatle (Paul, but still) -- Vietnam and rock 'n' roll have infiltrated every cultural corner, including, I'd argue, the current crop of cinematic thrills.

One of the smartest paragraphs ever written about American culture comes toward the end of Vietnam correspondent Michael Herr's book "Dispatches." Home from the war, he writes, "Out on the street I couldn't tell the Vietnam veterans from the rock 'n' roll veterans. The Sixties had made so many casualties, its war and its music had run power off the same circuit for so long they didn't even have to fuse ... What I'd thought of as two obsessions were really only one, I don't know how to tell you how complicated that made my life. Freezing and burning and going down again into the sucking mud of the culture, hold on tight and move real slow."

Or, as a character in "The Straight Story" points out, "There's a lot of weird people everywhere now."

Herr's weariness of pop, of the war, of too much sex and drugs and rock 'n' roll, too much death and freedom, too much fighting here and abroad, translates to the big picture too. The USA is a Vietnam veteran and a rock 'n' roll veteran. And aesthetically, for its citizens, this is a double-edged sword. What it has meant is that conventional authority (the authority, say, to send thousands of soldiers to die but not until they've killed thousands of Vietnamese for, let's face it, pretty much no reason at all) came to seem ugly, ugly and crude.

Whereas conventional ugliness (Ladies and gentlemen, Little Richard!) came to epitomize a new definition of beauty. As Nik Cohn wrote of the music biz before rock, "For thirty years you couldn't possibly make it unless you were white, sleek, nicely spoken and phoney to your toenails -- suddenly now you could be black, purple, moronic, delinquent, diseased or almost anything on earth, and you could still clean up."

"American Beauty" entrusts the viewer's sympathy and the boy's sexual desire to the intense and grim daughter Jane (Thora Birch), who wears too much eyeliner and doesn't carry herself with the sexy self-confidence of her blond bombshell best friend Angela (Mena Suvari). Jane looks like a Nine Inch Nails fan and is only pretty if you think Kim Deal is pretty, whereas Angela, for all her slutty airs, could be re-clad as a member of the Pat Boone fan club. She's that blond and milky and dull. Mad with jealousy when the boy next door obviously prefers Jane, Angela yells at him, "Well at least I'm not ugly!" He replies, "Yes you are. And you're boring. And you're totally ordinary. And you know it."

Rock and Vietnam aren't just metaphors in a lot of these films. They're part of the language the characters speak. Like the Iraqi torturer in "Three Kings" interrogating the American soldier. (What happened to Michael Jackson?) Or that to celebrate quitting his job, Kevin Spacey in "American Beauty" gets in his car and sings along with "American Woman." Or that perfect moment in "The Limey" when the young girlfriend of Mr. '60s Peter Fonda, (playing a lovable if loopy record producer who was there, man) looks at a Grateful Dead poster on his bedroom wall and asks him why he has the same poster at home as the one in his office and he unconvincingly protests, "No. They're different."

As for Vietnam, if the horrors of war were the underlying theme of all previous war literature from Homer on down, Vietnam made that subtext into text. Before Vietnam, I'm not sure an American film would have depicted the crucial, devastating moment in "The Straight Story" when World War II vet Alvin Straight sits down with a fellow vet and confesses to accidentally killing one of his own buddies in the war -- a secret that's clearly been digging a hole inside him for 50 years.

Or one of those glorious John Wayne war epics wouldn't have showed, as "Three Kings" did, what happens to a combat corpse in such unflinching detail. Of course, in "Three Kings," the conventional Vietnam-movie question of Should We Be Doing This (A: No), is translated to Mark Walberg's Troy Barlow pointing at an Iraqi soldier and wondering, "Are we shooting people or what?" (A: Yes, he decides, and blows him away.)

I've been watching a lot of Billy Wilder movies on video, because I've been reading director (and former rock critic) Cameron Crowe's interview book "Conversations with Wilder." Like everybody else in general and Crowe in particular, I love so many of the old man's films -- "Double Indemnity," "The Apartment," "Sunset Boulevard," even "Sabrina." And while Gloria Swanson and Barbara Stanwyck are as lurid as ever, or Audrey Hepburn's smile and Jack Lemmon's grimace can still break my heart from across the divide of decades, I don't deep-down identify. Maybe it's just the armies of suits, the battalions of ties. I mean, all those million repetitions of the titles "Mr." and "Miss" in "The Apartment" kind of get on my nerves.

And just try to get a grip on Fred MacMurray's barbershop buzz after you've just been appalled and therefore enthralled by John Cusack and Cameron Diaz's "Malkovich" mops. I was trying to put my finger on it, this distance I feel between those movies' world and my own, when I came across Crowe's description of a dinner he and his wife had with Mr. And Mrs. Wilder. I found my answer: No rock 'n' roll.

The question of whether a chauffeur's daughter can date a rich man's son -- that question has been answered and then some. According to Mick Jagger, she can sleep with him and whoever else she wants. Wilder's strangest character is "Sunset Boulevard's" Norma Desmond. But Norma's only off because she's crazy, which for 6,000 years or so was pretty much the only excuse for acting like Prince or Johnny Rotten.

At that dinner, Wilder asked Crowe, "What is rock music?" Crowe, obviously delighted at the query, enthusiastically runs down the history of rock from Robert Johnson through punk and claims that he's "even able to finish by referencing the unplugged version of Eric Clapton's 'Layla' now playing in the next room, bringing it all back to Robert Johnson in less than two minutes." And does the senior citizen have a breakthrough, exhibit some flicker of excitement, crumple his napkin and run out to Tower to dig right in? No, he blurts, "I can live without it." Maybe he could, but the rest of us can't. If we want to go to the movies, we don't even have a choice.