I sold commie posters to a future Supreme Court justice

Long ago His Honor paid 10 bucks for a Bolshevik broadsheet. I wonder where it's hanging now. 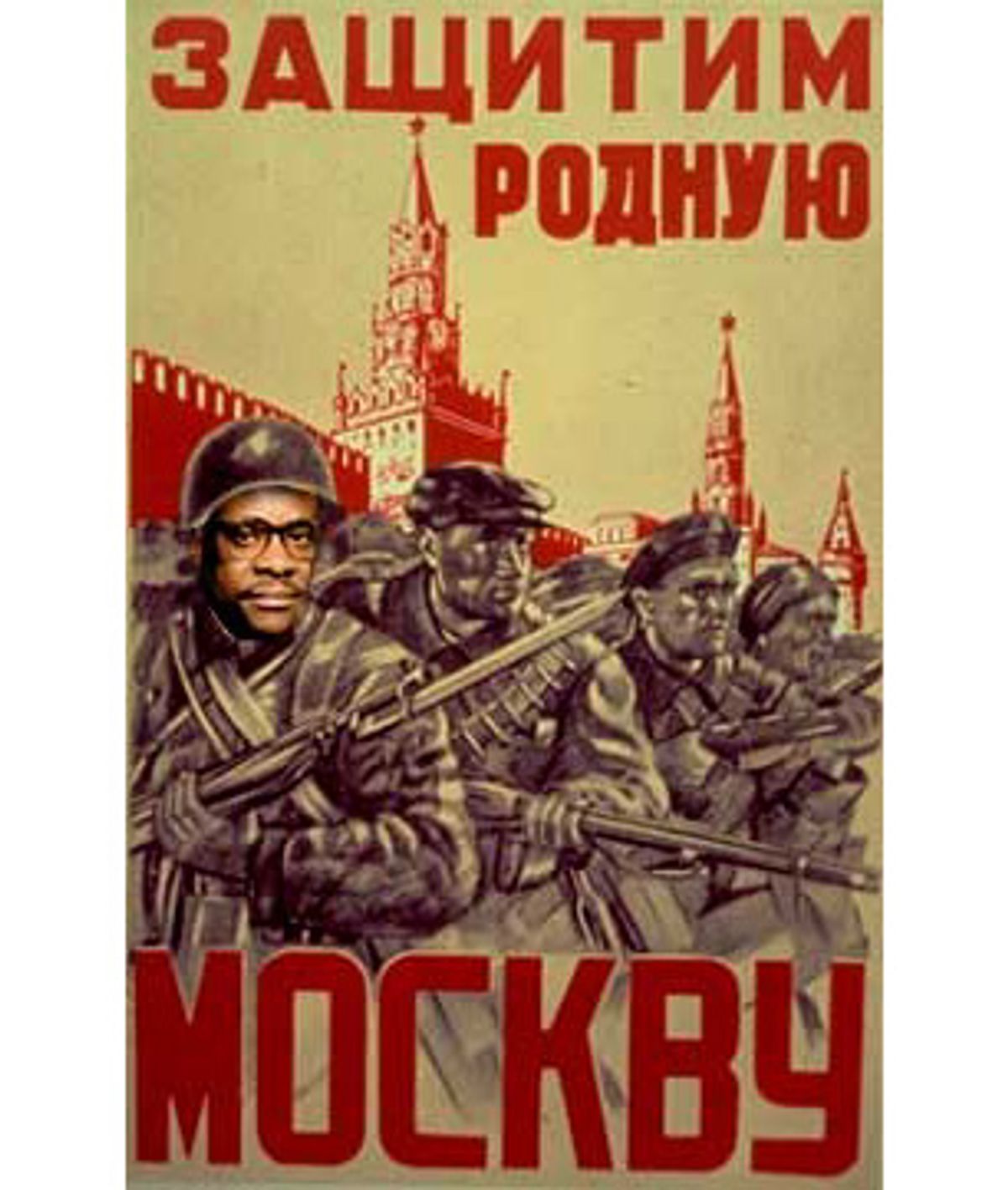 It was about 8 o'clock on a warm, sunny evening in July. Natalia, the young woman keeping pace with me along Leningrad's Nevski Prospekt, was easily the most beautiful woman on either side of the Urals. An associate something-or-other at the Smolny Institute, the Communist Party's local headquarters, she bore a striking resemblance to Julie Christie. But, alas, Natalia's pout was distorted by genuine anger. It was 1969, and she was holding me personally responsible for the war in Vietnam.

Not that I, a 21-year-old American college student, had much to do with the war effort. As even a casual perusal of the files of the Selective Service System will reveal, I sought to distance myself from both the war and the military as far and as fast as the torn ACL in my right knee would carry me. Besides, I had protested, I protested. But none of this mattered a whit to Comrade Natalia. This was her moment to defend the cause of international communism while practicing her English. So as any hopes faded that she might prove a deliciously corruptible Ninotchka, I looked for a path of retreat to beat.

Across the grand boulevard slicing through the heart of Russia's second city stood Dom Knigi, the House of Books. I made for the imposing building, the largest bookstore in Leningrad, with Natalia dogging my steps, saying things about Richard Nixon that I then thought quite paranoid but, years later, had to admit were oddly insightful. My hope was that the library-like atmosphere of a bookstore would, if not silence her tirade, at least mute its volubility. That worked, up to a point. She calmed down amid encyclopedic collections of the works of Marx and Lenin. She even asked what I intended to purchase. The prices were unbelievable. Everything was sharply discounted, presumably to move the merchandise to the masses.

Still, I had no intention of buying anything. For one thing, I had a train to catch early the next morning from the Finland Station. After 10 days visiting Kiev, Moscow and Leningrad, I was bound for Helsinki and a decent meal, and I planned to travel light. Moreover, my pocket contained but four rubles (then worth a handsome $4.40 at the official rate). And, even if I could have shaken Natalia, I had no desire to engage in any last minute money-changing on the black market. But then, glancing about, I was beckoned by a full-size poster of the founding father himself, V.I. Lenin, hanging in a back room down a dim corridor.

As I approached, it was evident the entire room was given over to posters that were nothing like the posters then common at home. There were no psychedelic montages idolizing a Lennon, a Hendrix or a Joplin. There were no Richard Avedons and no saccharine pleas for world peace adorned with daisies or the sentiments of Kahlil Gibran. And there was certainly nothing even vaguely reminiscent of Robert Indiana's insipid but wildly popular Love poster. No, what we had here were seriously classic works of agitprop, posters drawn in a range of styles from socialist realism to fantastic primitives. At least a score were variations on Lenin, whose waxy remains I had viewed days earlier at his Red Square mausoleum in Moscow. Most of the others showed brawny workers of both sexes building monstrous dams or reaping bountiful harvests. (In retrospect, it's remarkable how closely these selfless icons of Soviet industry resemble today's personally trained, buffed-up celebrities.)

Then there was the most striking poster of all. Against a dark red background stood a shirtless and exceptionally muscular black man of indeterminate nationality. In his right hand, he held an ancient rifle while a broken chain dangled from his wrist. In the lower right corner of the poster was a silhouette in white of the battle cruiser Aurora, the warship that had fired the shot signaling the start of the Bolshevik coup in 1917. Inscribed in Russian across the top (but needing no translation) was the famous command: "Rise up -- you have nothing to lose but your chains!" As propaganda, it was, even for that time, well over the top. As pop art, though, it was to die for.

I asked Natalia to inquire about the cost.

Natalia was puzzled. Had I suddenly undergone some revolutionary epiphany here among the icons of Soviet life?

"Why so many?" she asked hesitantly, not quite knowing what sort of answer she might receive.

"To bring home with me. This is a gold mine. A license to print rubles. You can't imagine how much these posters would be worth in America."

She was confused. Worth is a variable concept. But she had her suspicions. After all, to her I was already a warmonger.

"What do you mean? You would not sell them, would you?"

It wasn't clear whether it was anger or disappointment that hit her first.

"So you will give them to your friends?" she offered.

"No, Natalia. Sell. I'll sell them to friends and anyone else who wants to buy one."

Cautiously eyeing me, obviously praying to her socialist gods that I would redeem myself with charity: "Oh, you mean you will sell them for what they cost you."

Silly Communist. "No, you have no idea how much these will fetch. Maybe $10 each or more. The profit margin will be incredible."

Profit margin. The concept, of course, was as familiar to her as it was antithetical. She may have been the most beautiful woman east or west of the Urals, but the look she now assumed was horrid. Before her stood not only an agent of U.S. military aggression in Vietnam but a gold-plated capitalist.

I couldn't resist a last dig. "By the way, do they have any of Trotsky and Stalin in stock? I hear they were prominent here at one time. Perhaps there is something of them behind the counter for special customers?"

She was not amused. After all, this was 30 years ago, long before Gorbachev and Yeltsin came to Western attention. There was a Cold War going on globally as well as a very hot one in Southeast Asia. And just the previous August, Soviet forces fraternally seized control of Czechoslovakia from the Czechs. The Evil Empire was still open for business. So maybe if I waited until hell froze over, perhaps then Stalin, Trotsky or even Khrushchev -- giants of Soviet history -- would be sufficiently rehabilitated to be shrunk to poster size.

The next morning I took the train to Helsinki along with my thick roll of posters. From a post office there, I mailed the package via surface mail to my college address in Worcester, Mass., where I'd pick them up when I returned in early September. In all, my investment came to $5.60.

When I showed up for classes at Holy Cross just after Labor Day, the posters were awaiting me, only slightly worse for the trip. After retrieving the package from the post office on the first floor of the student union, I went upstairs to the cafe for a coffee and to inspect my booty. Within 10 minutes of unraveling the roll of posters, I had sold two at 10 bucks a crack and one for $8 plus a jelly doughnut. (It was all the guy had, and I happily took it.) Not only had I covered my initial investment, I was well on the way to paying for the entire trip to Russia.

That fall of 1969, in case anyone of a certain age recalls, I was the fellow selling Soviet propaganda posters from Worcester to Boston. As one would expect, sales were especially brisk in Cambridge, where I turned Brigham's ice cream parlor just off Harvard Square into something of a showroom. Also, as anticipated, the most popular poster by far was the one of the fearsome, gun-toting black guerrilla. Sales of that item, which made up nearly half my inventory, tended to divvy up about equally between guilty white liberals and black revolutionary manquis.

None of this story would amount to anything more than a mildly entertaining yarn were it not for a certain customer who turned up on my doorstep that October.

Knocking on my dormitory door one night were a couple of black Holy Cross students, one of whom I knew from a seminar on racism in American culture. Along with him was a shorter, stockier man who was a year behind us. Both were big in the college's small Black Student Union. The one I did not then know wore what appeared to be combat boots, a choice of footwear I did not take to be an artifact of a previous life experience but rather a Statement. So shod, he didn't need his skin color to stand out on a campus where nearly everyone else wore Chuck Taylor rejects or ancient Bass Weejuns held together with white surgical tape.

His name was Clarence, but he was introduced as Cooz -- a nickname he had appropriated from a decidedly white basketball player who years earlier had starred at the college and then achieved some notoriety with the Boston Celtics. Ironically, Cooz, I would soon discover, was also a devotee of Malcolm X.

They had come, they said, to check out The Poster. It was obvious which one they had in mind, and, as luck would have it, there was just one left in stock. I got it out of my closet and rolled it out across my desk. They looked. They hemmed. They hawed. We negotiated. Or rather, I told them I wanted 10 bucks for it, and they allowed as to how I was ripping off the BSU. How about I donate it? I demurred, telling them at great length of the great lengths -- not to mention the dangers -- to which I had gone to bring this work of Soviet art into the United States.

"Hey, this is contraband. I've probably got an FBI file because of this. What do the feds have on you?" In the battle of drawing room subversives, I had just trumped them.

In the end, we exchanged one poster for two $5 bills.

Over the next several months, I ran into Clarence a few times, most memorably that December when a campus protest against corporate recruiters got out of hand and a number of students were arrested. Those charged with failure to disperse were disproportionately black, leading to charges of racism. Clarence was not among those arrested, but, along with the rest of the BSU, he withdrew from the college in protest. For its part, the school suspended all normal activities for three days and went into the sort of collective soul searching that small, Jesuit colleges do best. In the end, Clarence and his colleagues returned, albeit hesitantly, to a chastened college.

After graduation the following June, I moved to California and never gave Clarence another thought. That is, until 20 years later when I saw him on television. He'd put on a few pounds. He was standing next to George Bush at the summer White House in Kennebunkport, Maine. The president was telling the press and the nation that this man, Clarence Thomas, my old customer, would be his nominee to replace Thurgood Marshall as an associate justice of the United States Supreme Court.

The rest is history. My part was prologue. But I can't help wondering what he's done with that poster.