The case against matrimony

If marriage is risky, doomed and expensive, why bother? 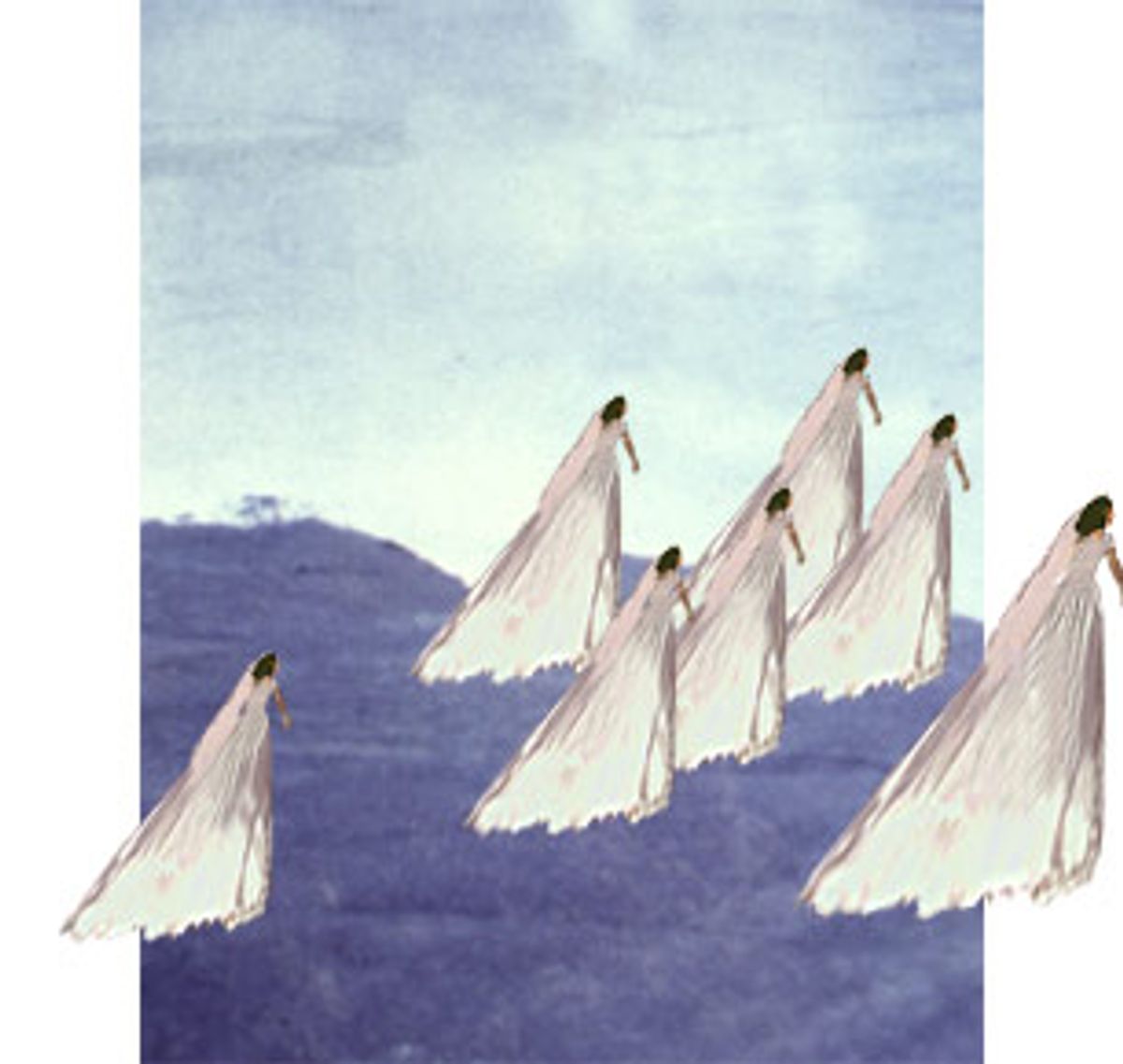 The National Marriage Project at Rutgers University recently announced the findings of a new study: The marriage rate has dropped 43 percent since
1960, and increasing numbers of young people are choosing to stay
unmarried. The U.S. Census Bureau came out with related big news last week:
The number of babies born to unwed parents has increased fivefold since the 1930s, owing, for the most part, to more and more couples rejecting marriage, even after the birth of a child.

Suddenly everyone is scrambling to understand.

Well, I get it, and I didn't have to scramble to understand. In fact, what interests me is not why the members of my generation (X, if you will) are getting married less, but why anyone is surprised. What did everyone -- i.e., the baby boomers -- expect?

As the unmarried mother of a new baby, I am the object of much
indignant scrutiny among the older generations, who seem to have
conveniently forgotten the past 30 years, in which almost everyone I know
has been emotionally pummeled in some way by divorce.

As my boyfriend asked at a recent family gathering, while playing a board game in which you have to prompt the other players to supply a particular word: "What must you do before you get married?" The answer, of course: get divorced. My father and his wife thought this was hilarious.

And yet aging boomers seem shocked and befuddled that someone would choose to avoid the whole swampy mess of broken vows and failed traditions that they've left in their wake.

People over 40 flinched with disdain when I first announced my pregnancy. "Oh," they would exclaim, barely masking their disapproval. "And ... what do your parents think?" They struggled to understand my lack of panic. "Are you going to keep it?" they asked, wide-eyed.

As if the '60s, '70s and '80s never happened. As if at least one-third of marriages don't fail. As if everyone in my family and my boyfriend's family, grandparents included, hadn't broken their marriage vows. At least once.

"What's with all these people in our family having babies without getting married?" my middle-aged uncle (who is divorced and recently broke up with his live-in girlfriend) asked my 40-ish aunt (who recently divorced her husband because he'd taken up with a married woman, who is now his third wife; my aunt is now living with her boyfriend).

The worst is from my parents. "Marriage is very important," my mother said. "It establishes a bond that you just can't get otherwise." I wanted to argue with her, but she was getting ready to leave the country with her new husband. They spend their summers at their cottage up in Nova Scotia, a good 20-hour trip away from the rest of us.

"Studies show that married couples are better off financially than single
people," my father's youngish second wife insisted. It's probably true that
she is better off financially since marrying my father, but I wasn't sure
how that applied to me. When my boyfriend and I looked into getting
married, we found out that we would pay an extra $2,000 each year in taxes.

If marriage is risky, doomed and expensive, well, why bother?

"You just should," my father offered in that magnanimous, ain't-life-grand
manner he developed shortly after re-entering the singles scene when I was
a teenager. My father is big on the "shoulds" of life, with some reason. He has always done everything he was supposed to, even as a divorced father; he never even bad-mouthed my mom (nor did she ever trash him, for that matter).

But the fact that my parents divorced well -- and they really did -- doesn't
grant them immunity from their actions. The fact that my uncles and aunts
and grandparents and family friends felt they had absolutely no choice
other than to divorce doesn't change the outcome. They still got divorced,
all of them. They still showed my generation, by example and by forcing us
to go along with their example, that marriage was something easily and amicably exited from.

Marriage, they said, was not that big of a deal. Premarital sex is fine. (Or at least that's what they implied when they presented their boyfriends and girlfriends at the breakfast table -- before we were even out of high school.) Families, they said, do not need to stay together if things become too boring.

I would have more sympathy for divorced people if their lives had improved by getting out of terrible marriages that (apparently) couldn't be survived for another moment. But the ones I'm familiar with continue to associate with flawed human beings.

These second and third marriages still seem to require work, and still have
shortcomings. My mother and father, for example, still struggle with the
same issues that plagued their marriage to each other. The only
difference is, older and wiser, they both seem more willing to compromise,
to sacrifice and to accept.

I am not whining about or regretting the events of the last three decades.
When my parents divorced in the late '70s, we children went along with it
like troupers. When they started bringing home boyfriends and girlfriends
in the '80s, we ultimately accepted these new people into our family.
Sometimes, the new people went away. And we dealt with the divorces and separations all over again. And accepted the new people all over again. Fine. Exhausting, but fine.

It's a wonder we 18- to 35-year-olds even have the energy to date. (And
maybe some of us don't.) But for myself, the scattered, patchwork concept
of family I grew up with has only increased my quest for commitment. I've
seen firsthand the pain and futility of divorce culture and I don't intend
to relive it, or to drag my children through the nightmare of watching
their parents flirt with strangers.

My decision not to marry does not indicate a desire for a life of
debauchery and half-formed commitments. Quite the opposite: With our new baby, our nightly sit-down dinners and our impending mortgage, my boyfriend and I are hardly bucking the system. But we also have no fantasies about coasting through the next 50 years on the coattails of a weakened and disparaged contract that, thanks to boomer innovation, now includes options like pre-nup clauses.

Considering everything we've seen, bearing the weight of our relationship on our own backs seems a hell of a lot wiser than leaning on the white-laced and satin-cummerbunded follies of our parents. Thanks, but we're looking for more than just a party, a round of toasts and a validity stamp from Uncle Sam to get us to that golden anniversary.

Our parents, on the other hand, seem to believe in marriage more than they
do in monogamy. Like I said, that's fine. Every generation has its torch to
carry. But when this particular generation, which grooved to its own beat
and stomped on every tradition that seemed too square, too inhibiting or just plain boring, turns around with nostalgia in its eyes and questions my choices, I have to protest.

My generation would just as soon steer clear of the fatuous, feel-good mess of getting divorced and remarried. The tradition that was passed down to us -- in which divorce is a logical and expected conclusion to a marriage -- is one we would just as soon pass by.

Boomers have as much of a right to get down on us for this decision as we would to criticize our offspring for not working hard enough or saving for retirement. What does everyone expect? For better or worse, you contribute to the culture you live in.

Of course marriage is on the decline. But don't blame us.

The boomers started it.

Larissa Phillips is a freelance writer in Brooklyn.