"All About My Mother" 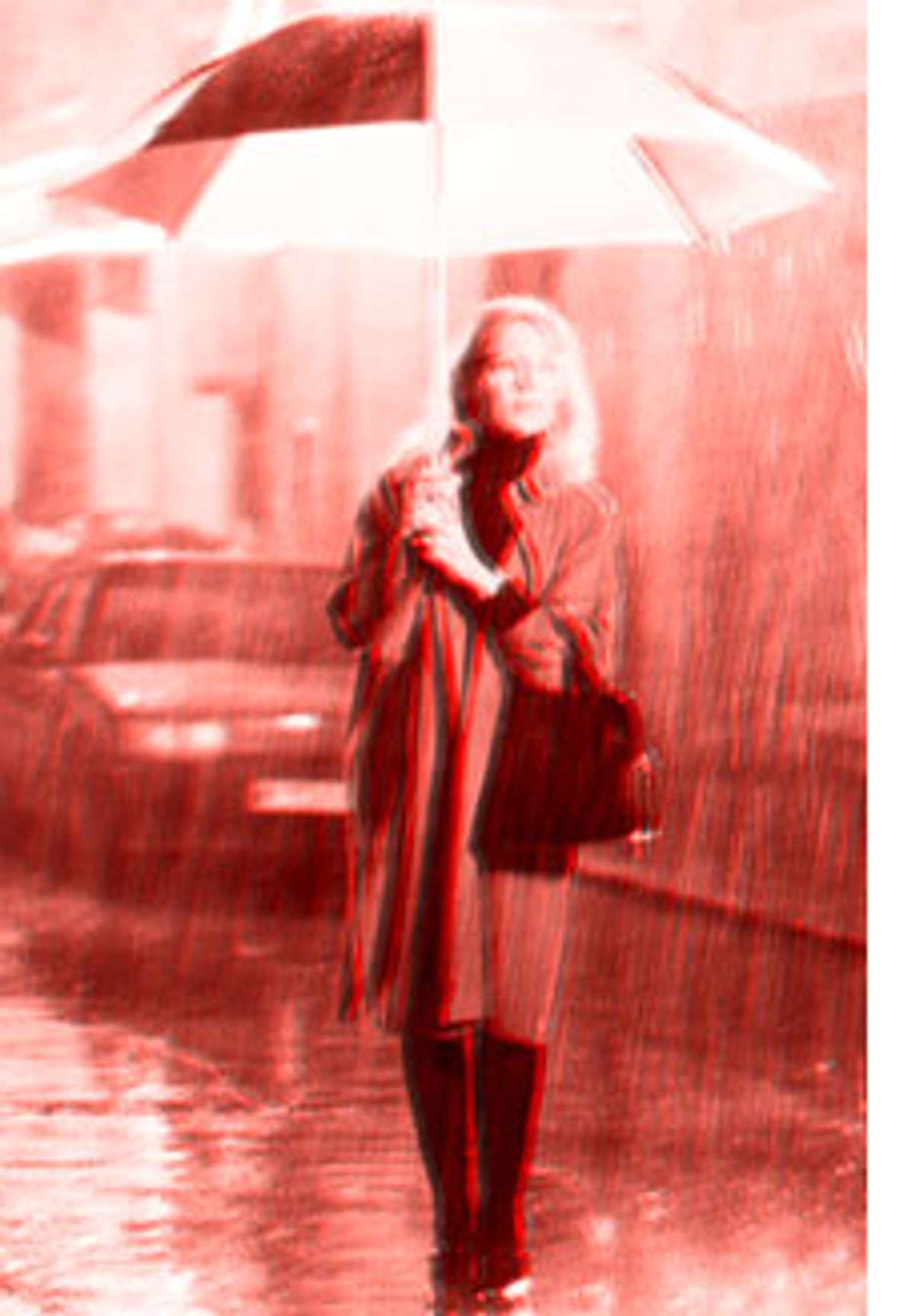 There's nothing so comforting as the florid straightforwardness of an Almodsvar movie. "All About My Mother," the Spanish director's latest, is unapologetically passionate in the manner of his early movies like "Matador" and "Law of Desire," and willfully unhinged like "Women on the Verge of a Nervous Breakdown."

But "All About My Mother" cuts deeper than any of those movies. Like classic women's pictures of the '40s, it's staunchly committed to the spirit of melodrama: There are tragic accidents that tear lives apart, impossible love affairs with dire consequences, people whose seemingly cold hearts reveal surprisingly warm recesses and, at the movie's center, a man whose natural charisma spells trouble with a capital T.

And mostly, of course, "All About My Mother" is about the essential nature of motherhood -- not the soft suburban American momhood in movies like "The Story of Us," pictures where frazzled women are constantly dropping their kids off at soccer practice, their commitment to life's chores like merit badges proving their love. In "All About My Mother," a 38-year-old woman (Cecilia Roth) watches as her teenage son is hit by a car; when she runs to him and crouches over him in the rain, we see her sideways, tilted and blurry, from his fading point of view. Her red raincoat, which had seemed monumentally cheerful just moments before, is already a reproach, a useless remnant of what her life used to be.

Her cries of grief, and her face, distorted into a tragic mask that's beyond beautiful, seem far away and knife-point immediate at the same time. They dissolve from our view just as they disappear from her dying son's. In the most basic sense, it's classic Hollywood melodrama done up stylishly, and yet there's something so timeless and direct about it that it catches you off guard. It has the power of Greek tragedy translated into the context of everyday modern life, summing up both the boundlessness and the limitations of a mother's love by charting the moment when she realizes that not even her fierce protectiveness can save the person she loves most in the world.

That early scene has to be one of the hardest moments in "All About My Mother," but it's also the one that sets us up for the movie's intense, undeniable joyousness. It is so emotionally multilayered that there are times when you're not sure whether you're more ready to laugh or cry, but in the end it is nothing but joyous. It moves deftly, partly because it's impossible not to get swept up in the current of its characters' lives: Manuela, played by Roth, is a devoted single mother who needs to come to grips with the death of her 17-year-old son, Esteban. She'd told Esteban nothing about his father, but when she reads the last lines of her son's journal ("I want to meet him, I don't care who he is, or how he treated my mother. No one can take that right away from me") she realizes she has to find his father, to explain to him what's happened.

Manuela leaves her home in Madrid for Barcelona, reconnecting with her old friend Agrado (Antonia San Juan), a transsexual who had also been close with Esteban's father. He, Agrado, and Manuela had lived together years ago -- Manuela had simply disappeared one day 18 years ago, pregnant with the young Esteban -- and the two are thrilled to have found each other again. Agrado introduces Manuela to Rosa (Penilope Cruz), a young nun in trouble, and Manuela also meets Huma Rojo (Marisa Parades), a brilliant actress whom young Esteban idolized. (She had, in fact, indirectly caused his death.)

Beyond that, the plot of "All About My Mother" is about as convoluted and magically inexplicable as those of Almodsvar's other movies. The story that unfolds is wonderful, but with characters like these, it almost doesn't have to be. They're so engaging, and so beautifully played, that it would be almost enough just to sit and listen to them talk for an hour and a half.

Marisa Paredes as Huma is brusquely cold at the beginning. At first we see her as the kind of 50-ish actress who can bring grandness and sensitivity to a role but who might look at a fan or a polite autograph-seeker with nothing more than devastating coldness. As her friendship with Manuela develops, though, we see her as something else. Her almost girlish smile seems to take 30 years off her finely sculpted face, and it's clear that she simply keeps her slow-burning warmth hidden behind a protective fagade.

Penilope Cruz, as Sister Rosa, with a face as fresh and open as a camellia, is the essence of purity (virginal or not) without being cloying. She can be hilarious. At one point the four women are gossiping about fashion and other stuff over a bottle of cava and some ice cream, and Rosa pipes up, "I think Prada is ideal for a nun." She also has a moment in the movie that takes you apart, when she encounters her Alzheimer's-addled father out on the street walking the family dog. The dog remembers her, but the father doesn't, and the wounded acceptance on her face tells you more about the character than any line of dialogue ever could.

Antonia San Juan is delightful as the transsexual prostitute Agrado, who claims she's so named because she's always tried to make life agreeable for others. And she does just that, constantly bitching and gossiping and kvetching -- at one point she itemizes how much each reengineered body part has cost her -- in a way that makes her irresistibly likable. In one scene, her face swollen and lumpy from a recent beating, she steps out with Manuela in a trim-fitting fuchsia suit: "Nothing like a Chanel to make you feel respectable." Her one-liners and acerbic asides illuminate the absurdity of the story that's unfolding but also act as a salve for it.

Critics at the Cannes Film Festival grumbled when none of Almodsvar's actresses took any honors, and as terrific as they all are, it's impossible to understand how Roth, at least, wasn't singled out. She's the heart of the movie, the one you worry most about, the one who always seems the strongest and most capable but whose fragility, given her recent experience, is always painfully apparent. The scenes where she's clearly struggling with Esteban's death get to you, but in some ways the moments not long after, when she's eagerly catching up with her long-lost Agrado, are even more deeply wrenching. Her potential for happiness can't be disqualified by sorrow, and you see it clearly in her face, in the way there's something both weary and boundlessly light-filled about it.

Almodsvar's storytelling is at its best here. I'm still not quite sure how he does it, over-dramatizing much of the time and yet still tapping into so much genuine feeling. After Esteban dies, Manuela -- who works as a transplant coordinator herself -- agrees to donate his heart to a man in need of a transplant. In a vignette that fools you into thinking it's going to become a major part of the story, we see the man and his wife getting the phone call in the middle of the night, and a shot of nurses and doctors emerging from a helicopter with a cooler. A few weeks later, the man emerges from the hospital, impossibly fit-looking and happy, flanked by his wife and some relatives. Manuela hangs in the background, huddled behind dark glasses, watching; in her grief, she needed to find out where her son's heart was going. The man walks toward the camera until, right at heart level, he simply blacks it out, and nothing more is ever said of him. It's Almodsvar's way of giving us comfort -- of reassuring us and Manuela that Esteban's heart has found a good home.

In "All About My Mother," the lavish colors do as much to draw you in as its emotional richness does. The picture, shot by Affonso Beato, is staggeringly beautiful to look at. Filmed in Barcelona, it uses the city's mosaic columns and spindly cathedrals to grand effect. Even the richly painted borders that adorn the hallways of the apartment buildings, or the clashing wallpaper in Manuela's apartment, have a quiet significance. All of these elements stand as glorious backdrops for the trauma of everyday life; Almodsvar may be reminding us that they'll remain long after his characters' hearts have been soothed.

"All About My Mother" is a movie so intrinsically rich that it doesn't need any metaphors. But the happy, confused hodgepodge of patterns and in situ architectural elements that Almodsvar uses suit it perfectly. Emotionally speaking, there's a lot going on in "All About My Mother": Unlikely characters connect in surprising ways; cold people turn out to have good hearts. Visually speaking, as well as in terms of its striking performances and its outlandish mode of storytelling, "All About My Mother" is all plaids and stripes, polka-dots and moonbeams, thrown together in ways that break all the rules -- and work like a charm.