Throw away the key!

Jesse Jackson has betrayed the civil rights movement by defending young thugs who need to be punished, not babied. 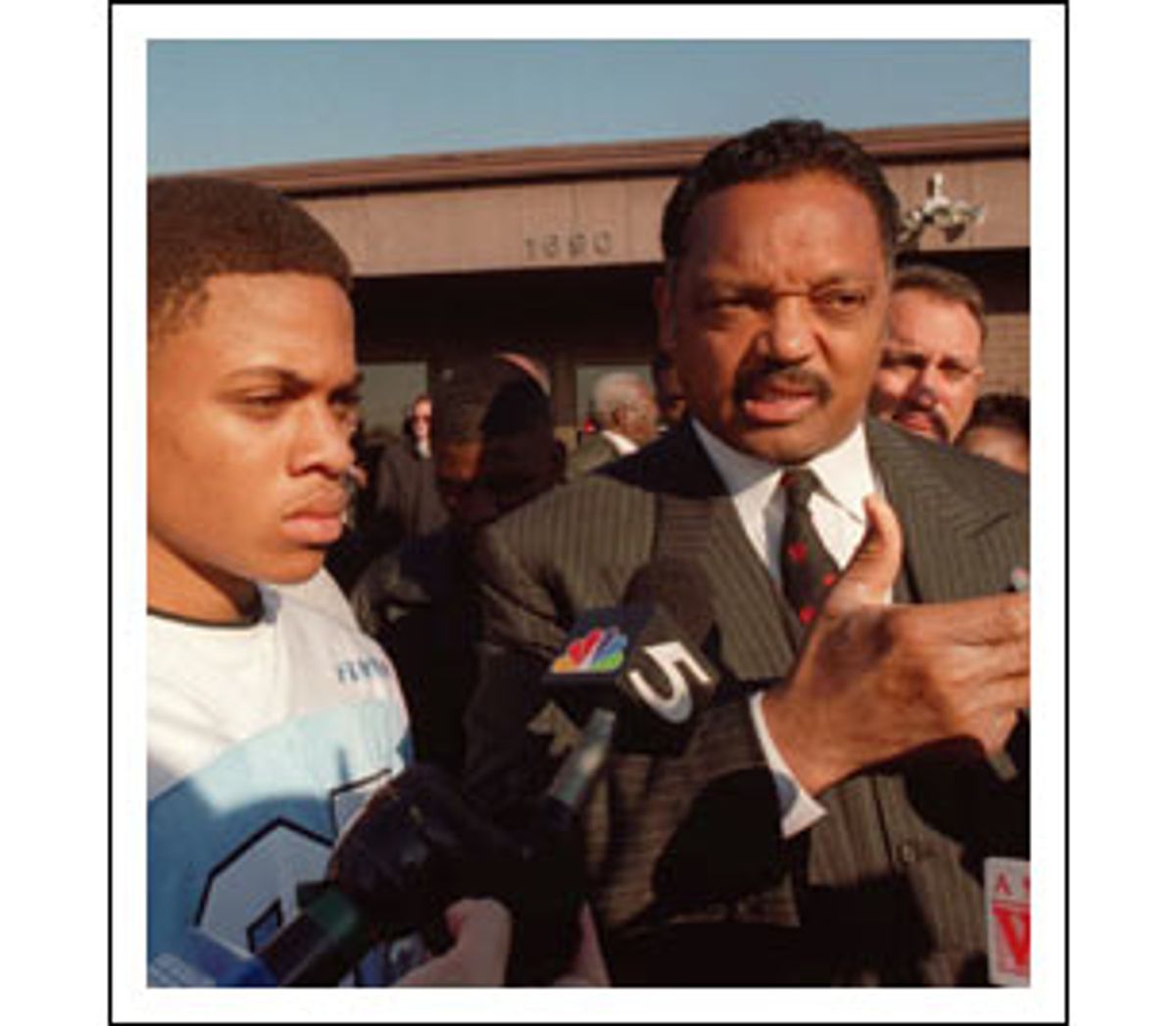 You could be forgiven for thinking that I'd hired Jesse Jackson to launch his campaign in behalf of the "Decatur 6" to promote my book "Hating Whitey and Other Progressive Causes." The book is about the moral degeneration of the civil rights movement into a hustle designed to keep "racism" alive.

The book opens with a tour of the National Civil Rights Museum, which is housed in the Lorraine Motel in Memphis, Tenn., where Martin Luther King Jr. was killed, and which features among its exhibits a large portrait of Elijah Muhammad, the racist kook who founded the Nation of Islam. It is as though a portrait of the leader of the Hale-Bopp comet cult were to be placed inside the Jefferson Memorial.

The Decatur 6 are a group of low-life gang-bangers who participated in an explosion of thuggery at a high school football game in the small town of Decatur, Ill., spreading panic through the stands and endangering the safety of innocent bystanders, including women and children.

Apparently, the incident was a rumble between members of the Gangster Disciples and the Vice Lords -- self-identifications which tell you more about who the Decatur 6 are and what they aspire to than you probably wanted to know. Yet, the Rev. Jackson refers to these predators as "our children," whom whitey is trying to persecute and keep from access to educational opportunity. He got himself arrested Nov. 16 to protest their expulsion and demand they be allowed to return to their school.

For their part, the villains in Jackson's case -- the seven white members of the Decatur school board -- reacted swiftly to the outrage, expelling the six delinquents in an effort to punish them and make them an example to others.

Like many other school boards, Decatur's had adopted a policy of zero tolerance for violence in the wake of the Columbine shootings and similar terrifying incidents. Discipline, it should go without saying (but can't, apparently, in the present racial context), is an absolutely crucial element in the creation of a productive educational environment. Youngsters who go to school in fear are not going to be able to focus on their studies. Youngsters who disrespect authority are not going to learn at all.

There is no sector of the population that needs to hear and heed this message more than young, inner-city African-American males. One in three among them is a convicted felon. Homicide is their No. 1 cause of death, and their killers are mainly other young African-American males. It doesn't take a rocket scientist to conclude that restoring social and individual discipline in the inner city (having a zero tolerance for violence) is one of the most crucial tasks facing this nation if it is to increase the opportunities and life expectancies of its most disadvantaged inhabitants.

Yet here is Jesse Jackson in Decatur, breaking the law and getting arrested Nov. 16 to support criminal rioters, and attempting to turn them into civil rights heroes. What a message!

Jesse Jackson has betrayed the civil rights movement. He has squandered the moral legacy that the movement inherited from its founder Martin Luther King Jr., and has turned it into a ritual of blaming whitey for every failure in the African-American community.

This is pure doublespeak like the Orwellian slogan, "Slavery is freedom." Quality education and equal protection under the law are what the members of the Decatur school board are ably defending. To sustain these principles it is absolutely imperative that Jesse Jackson be convicted and remain in a Decatur jail until he has served his time for breaking the law, which in his case is officially and appropriately called "contributing to the delinquency of a minor."

Let the punishment fit the crime.

What has happened to the civil rights movement? It has been clear for several decades, now, that "civil rights" leaders like Jesse Jackson have run out of legitimate causes. From Tawana Brawley to O.J. Simpson, from lawsuits against gun manufacturers (because too many blacks are killing each other), to racial preferences (because some black homes do not provide proper educational support for their children), the civil rights movement has become first a caricature and then an outright betrayal of its former self.

Under the new dispensation, Al Sharpton -- anti-Semite, freelance racist, convicted liar -- is now a "civil rights activist," and not just by self-appointment. He is accepted as a legitimate African-American spokesman by Democratic presidential candidates Bradley and Gore, and by first lady and senatorial aspirant Hillary Rodham Clinton. But Sharpton has merely trod the path that Jesse Jackson and other more mainstream leaders have carved out for him. Jackson and NAACP chief Kweisi Mfume embraced the race-hater Louis Farrakhan before Sharpton.

What a contrast this moral myopia is with the standard set by Martin Luther King. During his lifetime, King would not appear on any public platform beside Malcolm X because of Malcolm's virulent racism. King was not alone in ostracizing the Nation of Islam leader. NAACP head Roy Wilkins and Urban League President Whitney Young also refused to be associated with the Nation of Islam demagogue. The purpose of this ostracism was to draw a clear moral line between what the civil rights movement stood for and what it was against. If blacks like Elijah Muhammad and Malcolm X were racists, the civil rights movement was as opposed to them as it was to racists who were white. It was a matter of principle. As simple as that.

Their stand had an effect. Malcolm X himself became a convert. When Malcolm renounced racism in the last year of his life, King agreed to be photographed with him. But this picture has now become an icon, as though their conflict never took place. It has erased the distinction that King made. In the years since King's death, Malcolm X has been raised to canonic status as a patron saint of the civil rights movement, and his portrait now looms larger than life on the wall beside Elijah Muhammad in the memorial at the Lorraine Motel.

This blurring of distinctions between Martin Luther King and Malcolm is a template of the moral confusion that has overtaken the civil rights movement under the leadership of epigones like Jesse Jackson and Sharpton. Perhaps the most depressing aspect of all this dereliction is the absence of prominent voices within the African-American community (a handful of conservatives excepted) dissenting from this tragic betrayal. Not since the death of Rep. Barbara Jordan has there been an African-American figure on the left who has had the courage to call this wayward movement to account in the terms it deserves. In a memorable but un-honored keynote at the Democratic Convention of 1984 she declared:

"We are one we Americans, we are one. And we reject any intruder who seeks to divide us on the basis on race and color. We must not allow ideas like political correctness to divide us and cause us to reverse hard won achievements in human rights and civil rights. We reject both white racism and black racism. Our strength in this country is rooted in our diversity -- our history bears witness to that fact. E pluribus unum, from many one. It was a good idea when the country was founded, and it's a good idea today!"

To be sure, there are plenty of racial incidents in America today that require vigilant public attention. But these incidents are perpetrated by people of all colors and all ethnicities in the population at large. This may not be readily apparent to those who depend on a liberal media that likes to have whitey as the villain. A month ago, for example, even as the trial of Matthew Shepard's homophobic killer was concluding, two homosexuals -- one black, the other white -- raped and murdered an adolescent white youngster. There was little or no news coverage of this incident, no national hand-wringing over a politically incorrect hate crime. Do we need a white heterosexual civil rights movement to redress this injustice?

What we need, as Barbara Jordan so eloquently declared, is a single standard for all Americans when it comes to judging what is just and what is unjust. If discipline works for white youngsters, it should work for black youngsters as well, Jesse Jackson and his supporters notwithstanding. If it is wrong to hate "people of color" and to scapegoat them for every social problem, it is equally wrong to hate white people and scapegoat them for every problem that afflicts others.

Jesse Jackson is now the leader of the uncivil rights movement. It is the members of the Decatur school board who are the true heroes of this political hour. If they can only stand their ground, they will perhaps have produced a turning point in the battle over the nation's current hypocrisy on race. In particular, they will have struck a mighty blow for access to educational quality and to equal protection under the law.