What's luck got to do with it? 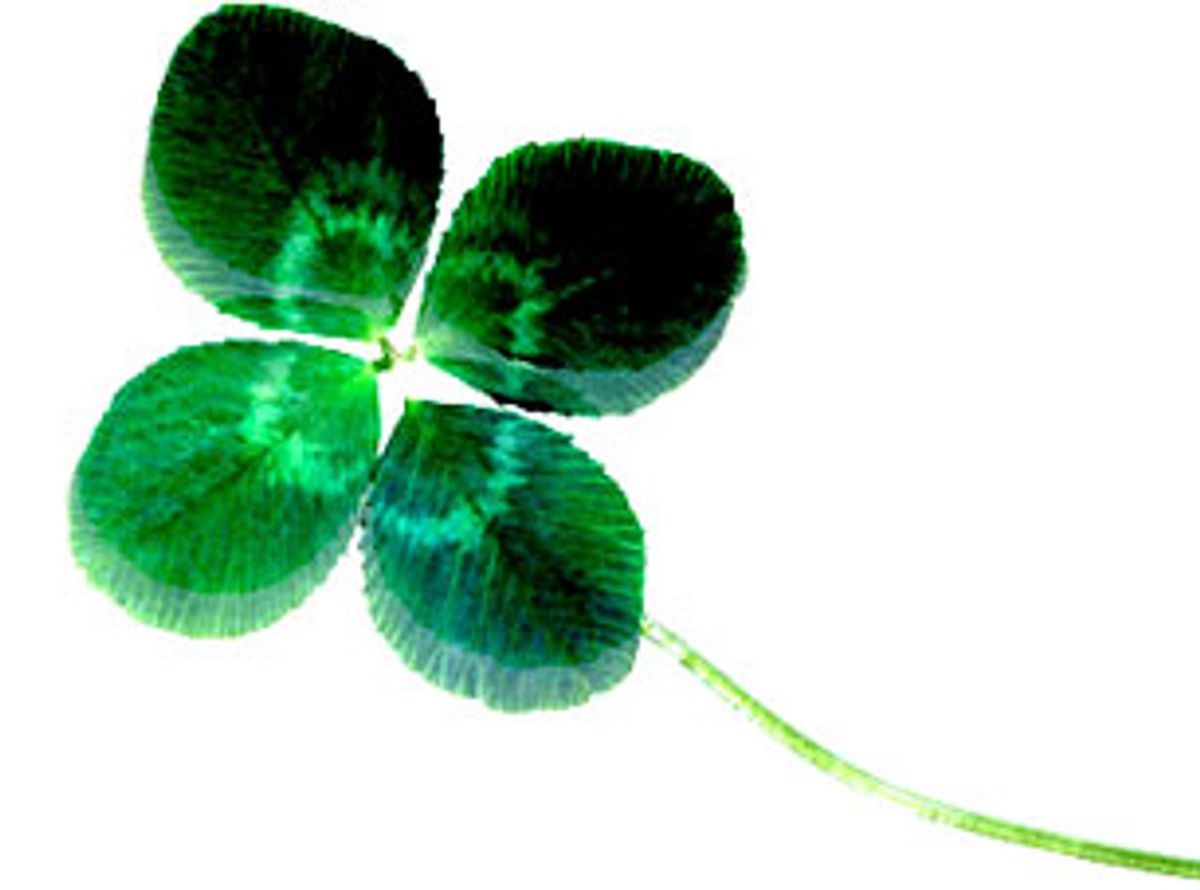 Denise Rossi knows what good luck is. Nearly three years ago she hit a $1.3 million lottery jackpot, divorced her older husband and started a new life with the winnings. Last week Rossi found out the meaning of bad luck: A Los Angeles judge ruled that she must forfeit every cent of the $1.3 million to her ex for concealing her good fortune in divorce proceedings. Coincidentally, also last week, Rossi's former husband discovered the meaning of good luck.

Tales of luck abound. I was lounging at a local cafe some months back when a neatly dressed older man nursing a heavily bandaged arm took a seat near mine. "What happened?" I asked him, expecting to hear about a tumble in a slippery tub. He'd been on a 747 landing in New York a few days earlier, he told me. The plane skidded off the runway, several people were killed, but he walked away slightly battered and boarded a flight to San Francisco. Not a bad piece of luck.

Nicholas Rescher, a University of Pittsburgh philosophy professor, has spent a good part of his career trying to clarify our fuzzy notions of luck, authoring what may be the definitive book on the topic: "Luck: The Brilliant Randomness of Everyday Life." Rescher points out that a traveler, like the man in the cafe, would have to jump on one flight daily for 4,000 years before the odds of an accident caught up with him.

Rescher's inquiry into luck led him from an examination of common expressions that invoke luck, to cutting-edge ideas in mathematics and physics. But, just what is luck or chance? Statisticians and actuaries would simply assign a number to the probability that you will be hit by an asteroid or win a hand of blackjack, and be done with it. Carl Jung stretched the imagination with the "meaningful coincidence" he called synchronicity. But, the lady who lost her wedding ring and found it 40 years later inside a potato would probably just call it "dumb luck."

"Much of what happens to us, where people meet their spouses for example, happens to us by luck," Rescher explains. "Often it's a matter that they just happen to attend the same party or wedding. The most concise way of putting it is, when something happens that affects a person for good or for ill, that occurs by chance rather than that person's design or some other person's contrivance. Luck is closely allied to the idea of fate, but the question of whether it's part of the grand plan or is really a matter of chance and happenstance seems to be the critical difference."

Chaos theory, which posits that tiny occurrences can have far-reaching consequences, also overlaps with Rescher's ideas about how luck operates in our lives. "The beating of a butterfly wing causes a rainstorm," Rescher says, by way of example.

Consider: A truck driver in Newark gets a head cold forcing him to miss a day of driving and thus sparing your life in a fateful meeting that would have sent your Oldsmobile skidding into the path of his 18-wheeler had he been on the road, and you get the idea.

"Causes so small that we can't see them, as it were, can have these big effects," Rescher says. "And so luck has a kind of secondary sense -- that is, even if the processes at work are not chance driven, they can be chance driven as far as the individual is concerned because the individual has no way of finding out about those processes."

Whatever you call it, Rescher insists, we are all at the mercy of the great invisible combine of luck. "Fat Man," the second atomic bomb to land on Japan, was originally destined for the city of Kokura. The pilots switched to a secondary target, Nagasaki, because clouds covered Kokura obscuring their original drop zone.

"Once you stop to think about that sort of thing you realize that the word 'chance' is a fairly complex concept," Rescher says. "There are some things that are purely chance phenomena. But if you're a philosopher you start thinking about fate. The idea of luck: being in the right place at the right time. You start working out the threads and it gives you a kind of rich fabric of ideas that are interesting to think about."

Rescher differentiates luck from fate ("inexorable destiny") and suggests that, elusive as it is, "the tiger of luck can be tamed." One way to make a pussycat out of that tiger is by simply putting yourself at risk. In other words, you have to be in it to win it. "Even an Irish Sweepstakes or one of these Spanish lotteries -- somebody's got to win," Rescher says. "And that individual is lucky and the others who don't, to that extent, are unlucky. There is nothing in particular that you can do, but if you don't buy a ticket you aren't going to win. You can't determine whether or not you're going to win but you can put yourself in a position to be able to win. That's a way in which people can influence their luck," Rescher says.

Which may explain why some people, even "bad" people, can come up luckier than others. In the end, luck is a thoroughly democratic force, the professor says. "It rains on the just and the unjust alike. A world that went by desert -- where people always got what was coming to them -- would be a very different sort of world. It would make for conditions of life that are very different. I think the fact that much of our fate is driven by chance is an important aspect of the human condition. It's a kind of equalizer between the deserving and the undeserving, and also, more significantly, an equalizer between the talented and the untalented. By getting the breaks, even a person born without the natural resources of superior beauty or intelligence can luck out. In a certain sense it makes life more or less fair."

Napoleon, a brilliant military tactician and planner, always asked his marshals whether they believed they were lucky or not. Unfortunately for Napoleon, he didn't have Rescher's book on hand when de decided to march into Russia all those centuries ago: "Luck: The Brilliant Randomness of Everyday Life" includes a handy, but imposing equation
(

(E) x pr(not-E) )
that he says can measure the variable. It only looks like a calculus equation, Rescher claims. "It's extremely easy to understand."

"The improbability of the outcome is one factor," he says. "You are obviously luckier if you win a 1-in-1,000 shot than if you win a 1-in-2 shot. But the other factor is the extent to which you gain. You're luckier if you gain a $1,000 than if you gain $2. That's the idea. One very rough measure of luck is just to multiply the probability by the gain. The luckiest outcome would be to have a very long shot for a very great amount: that is, to win something like an awfully big lottery."

Like Pasquale Benenati, who's taken home five California lottery jackpots totaling $5.18 million -- a feat of luck that even Rescher calls "phenomenal." Benenati credited his good luck to "faith in myself."

Of course, just because you haven't won five jackpots doesn't mean you're jinxed. "We don't always realize how lucky we are," Rescher reasons. "If you close your eyes and walk across the street and don't get hit, you may not realize how many narrow escapes you had. You don't appreciate the extent of your luck."

The paradox of luck is that even if you're unlucky, like that gentleman at the coffee shop, you may be luckier than you think. The National Weather Service reported that on average three people per year are killed by lightning. Marjorie Cox, an Ohio housewife was hit twice in 1996. Unlucky? Sure -- who wants to live in Ohio? But on the other hand, Marjorie is still alive, and that's not a bad bargain.

Rescher dismisses the idea that some people might possess a magnetic quality that attracts good or bad luck. "Low probability events do have to happen. Once good fortune has come your way, it's easy to think of yourself as having, in some sense, deserved it. I think that's something that reflects the human tendency to want the world to be rational to an extent that in all likelihood it isn't."

Jon B. Rhine is a writer living in San Francisco. He has written for Time, Newsweek and the San Francisco Chronicle, among other publications.

MORE FROM Jon B. Rhine