A communications authority eyeballs the current media merger mania and offers some hard and fast suggestions for doing better. 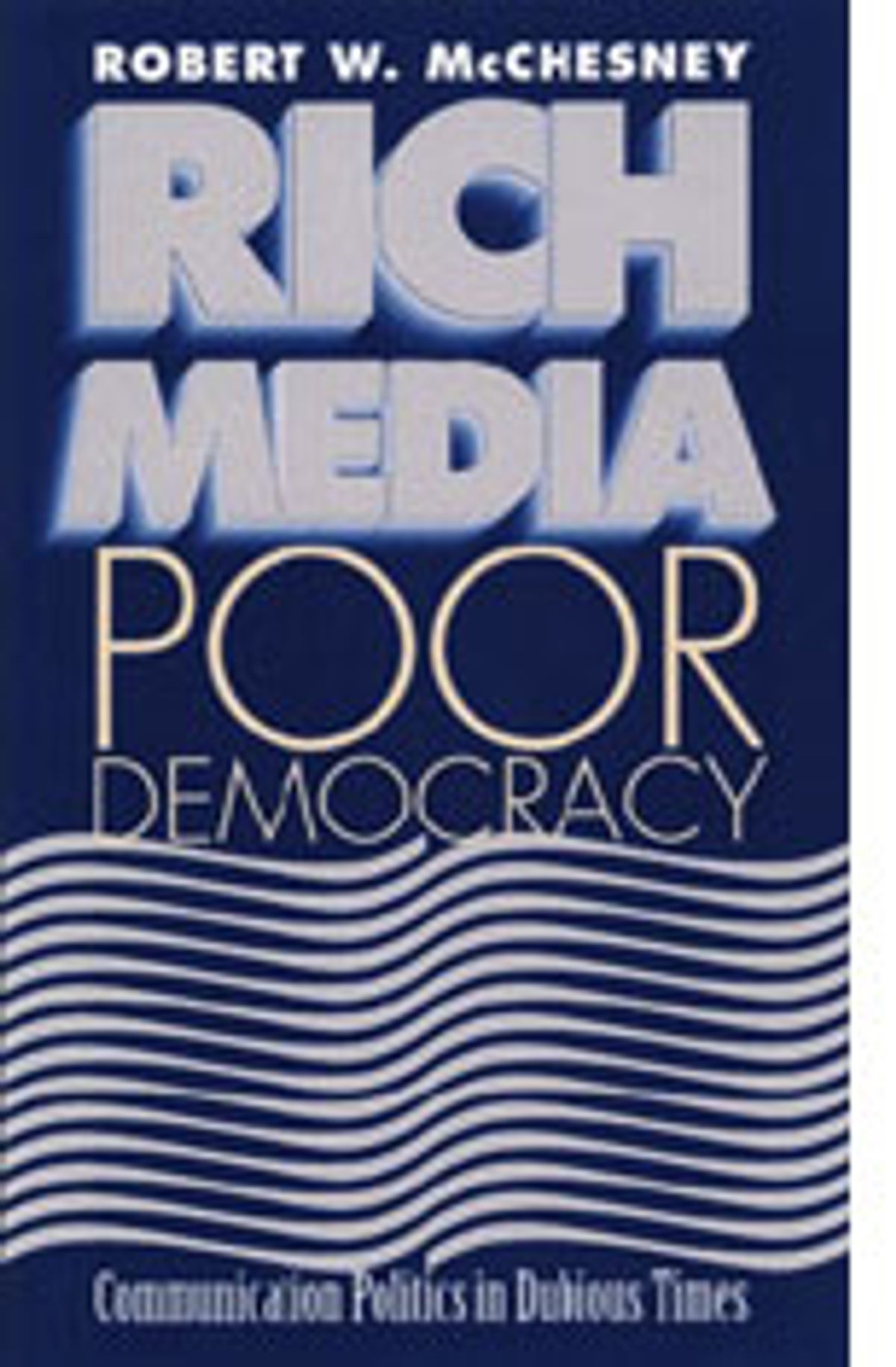 Robert McChesney, a mass-communications professor at the University of Illinois, isn't the first commentator to notice that the mainstream news and entertainment industries consistently fail to inform, educate and enlighten the American citizenry, and he certainly isn't alone in theorizing that these failures are at least partly to blame for a poorly functioning democracy and a debased political and intellectual culture. Such criticisms are almost obligatory no matter who you are or where you fall on the political spectrum. The rest of the litany usually goes something like this: The media give people what they want to see, and if everyone else were more like me, then there would be better programs and better news sources for smart, tasteful, discriminating people.

It's in regard to this last notion that McChesney's new book, "Rich Media, Poor Democracy" -- a meticulously researched, relentlessly argued, wonderfully populist rallying cry for media reform -- is a welcome departure from the media criticism we have come to know.

Basic market logic tells us that where there are monopolies or oligopolies there is less incentive to improve a product or service and more ability to control prices and increase profits. A handful of media giants compete with one another for market share, but they all know their mutual survival is assured. They also know they will continue to get fatter as long as nothing shakes up the status quo. In a one-on-one battle, one corporation would die and the other would likely suffer serious wounds; better either to merge or to find a peaceful coexistence in which both can prosper. (It's a fascinating coincidence that on the day "Rich Media, Poor Democracy" was released, MCI WorldCom and Sprint announced their $115 billion telecommunications merger, the largest corporate takeover in history.)

The speed and global nature of the buyouts, takeovers and mergers makes keeping up a dizzying impossibility. This isn't to say that nothing of value gets produced by the large media corporations and the smaller ones that haven't yet been devoured or subsumed by the giants. Time magazine's excellent three-part series in the fall of 1998 about corporate welfare is both an example of what the press is capable of and an increasingly rare exception to the new rule dictating a near blackout when it comes to reporting on labor issues or the inner workings of corporate America. And yet, surprisingly, McChesney found most of the revelations in "Rich Media, Poor Democracy" in the mainstream media, for the business pages of newspapers and magazines regularly report on what is really happening in our world. Here the ugly truth about the global market -- the upsides of low wages, downsizing and plant closings, for example -- appears in the plain language of investing advice.

Not content to merely demonstrate the extent to which almost everything we see, hear and read is controlled by a few monolithic firms, McChesney gives over his final 40 pages to a manifesto for reform. In his view, it's time for progressives to stop looking down their noses at mass media and start putting their energy and their money into building nonprofit mass-media sources. He calls for the establishment of a fully independent public broadcasting system funded at $5 billion to $10 billion a year rather than the current $260 million; a ban on all political advertising on TV; regulations requiring broadcast stations to give away at least four hours a day for noncommercial children's and news programming; and enforcement of the antitrust laws to break up the oligopolies.

These goals may sound fanciful, but when it comes to media we are accustomed to seeing huge changes in short periods of time. Ten years ago, who would have thought you'd be able to count on your fingers the number of companies that control almost all of the world's communications? Without some radical reforms, 10 years from now there might be fewer still.

Dustin Beilke has written for the Nation, the Progressive and Newsday, among other publications. He lives in Madison, Wis.