Two books about the history of coffee, already a subversive beverage in the 16th century. 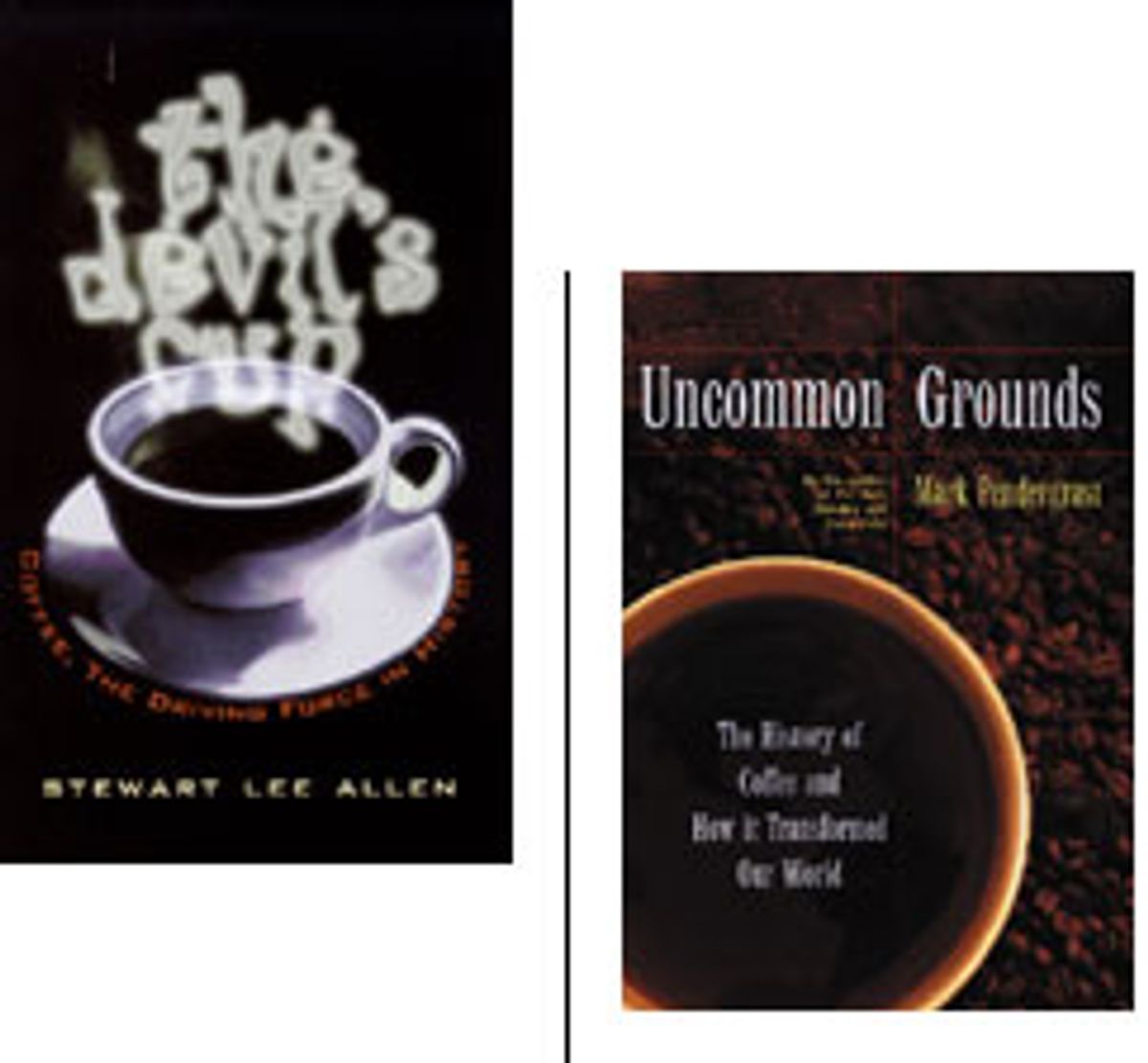 Coffee was first banned in 1511, by the head of Mecca's religious police. In 1675, Charles II banned coffeehouses from England. Frederick the Great followed suit in 1777, forbidding coffee roasting in Prussia except in official government establishments.

Since its discovery some 2,000 years ago, coffee has given the authorities pause, for wherever people gather to drink it, you will find controversy, political debate and innovative ideas. (The modern insurance industry was born in a London coffeehouse that grew into Lloyd's of London.) The world's most widely consumed psychoactive drug has also fueled artists, musicians and writers -- and inspired a plethora of books on coffee itself. Recently that literature has seen two notable additions.

Stewart Lee Allen's "The Devil's Cup" is one-third history of coffee, two-thirds gonzo travelogue. This is the work of a traveler who braves bandits, border skirmishes and life-threatening sea voyages to sample exotic (and often wretched) brews that have played a role in the history of coffee. The reader joins him on a caffeinated trip from Harrar, Ethiopia, where coffee was discovered, to Adrien, Texas, where Allen finds what he dubs the "all-American joe ... awful and terrifying and beyond compare." He traveled 20,000 miles in researching this adrenaline-filled book, wading into his subject neck-deep and capturing its mystique.

In Harrar, Allen spends an afternoon drinking kati (a precursor to coffee made by steeping the coffee tree's leaves) and chewing qat leaves (the addictive "evil sister to coffee"), then bribes his way into a Zar healing ceremony, an ancient mystical ritual involving the roasting of green coffee beans, whose roots go back to the earliest days of coffee. He sets off for Al-Makkha, Yemen, in a 30-foot dhow that proves to be seriously overloaded with "booze and AK-47s" and nearly sinks in the Red Sea. It was in Al-Makkha, or Mocha, that the first coffee is said to have been brewed from beans, and Yemen controlled the world's supply for centuries.

Traveling by train, dhow, rickshaw, cargo freighter and donkey, Allen follows the trail the coffee tree took as it spread around the planet. Along the way he offers a running commentary on (and makes an intriguing case for) 19th century French historian Jules Michelet's theory that Europe's transformation into a coffee-drinking society led to the birth of enlightened Western civilization.

Allen takes everything in stride, and he has the rare ability to capture his characters' unsavoriness without denigrating them. (He seems almost fond of Yangi, an Indian who swindles him out of $1,200 in a bizarre scheme to smuggle fake antique Rajasthani paintings into France.) When he reaches Campo Grande, Brazil, his journey comes full circle as he discovers a Western equivalent of the Zar ritual he attended in Harrar -- presumably carried to Brazil with the 8 million African slaves who for two centuries tended that country's coffee and sugar plantations.

Mark Pendergrast's "Uncommon Grounds" passes over the early history that is the subject of Allen's book in a few quick chapters, then focuses on its central topic: the coffee business in the 20th century. It is a weighty tome, with nearly 100 pages devoted to footnotes, a bibliography and other back matter. Pendergrast previously chronicled the story of Coca-Cola in "For God, Country and Coca-Cola," and he brings a similar thoroughness to this examination of the "second most valuable exported legal commodity on earth (after oil)."

Brazil, which has long been the world's largest exporter of coffee, also plays a central role in Pendergrast's book, and the picture he draws is not a happy one. Especially painful is his account of the relentless destruction of Brazil's rain forest to produce a massive overabundance of mediocre coffee.

Pendergrast details the cutthroat history of the giant coffee companies whose colorful cans dominated the supermarket shelves for decades: Chase & Sanborn, Maxwell House, Folgers, Hills Brothers, MJB and the rest. The advertising industry also receives a good deal of scrutiny as he explores the groundbreaking marketing campaigns the industry developed to sell the wretched stuff our parents brewed in their percolators.

If you want to understand the coffee business, "Uncommon Grounds" is a must-read. Pendergrast did a huge amount of research -- the list of people he interviewed totals 246 -- and his level tone inspires trust in his information. But at times there's an academic quality to "Uncommon Grounds." Pendergrast toured Central America and visited various coffee operations there, but if he left his study at any other time during the writing of the book, there's little evidence of it. "The Devil's Cup," on the other hand, manages to convey a surprisingly thorough basic history of coffee in an entertaining package that no one could mistake for a textbook.