I play him nice, but stupid. 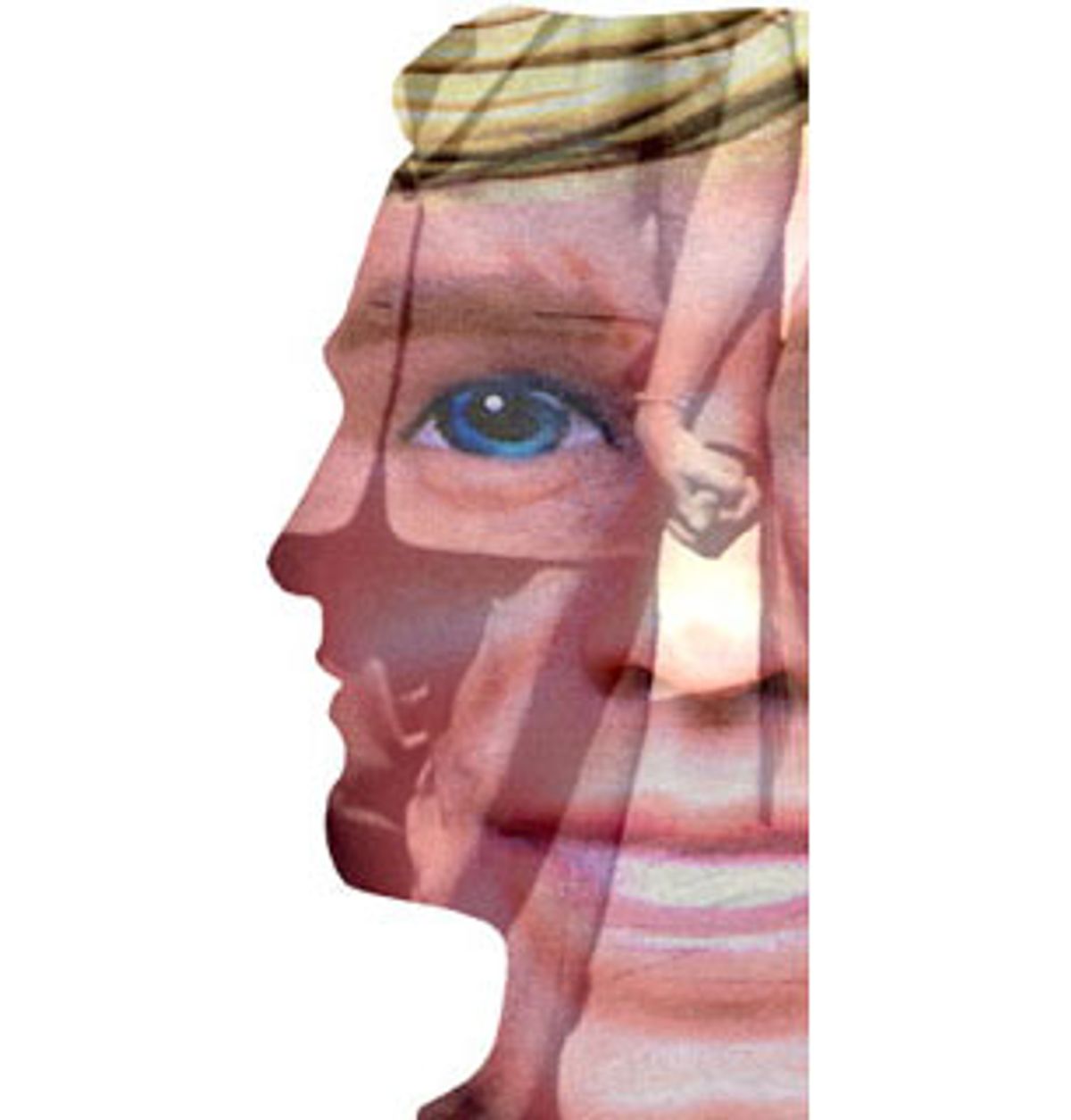 The queen of China is knocking at the door, tall and stately in a red
velvet robe, which is offset by hair the color of tomato soup. Ken is scurrying about, getting the family ready. "Quick, the queen is coming! The girls must have their dresses on! They must take their seats facing the door!" Whitney, the youngest, is trouble as usual, jumping up and down on her jointed legs, flouncing her long frizzy hair, whining and generally giving Ken hell.

Ken is nice, but stupid. The queen takes off her robe. She's an orphan
girl with no home. Ken offers her some dinner -- she must be starving -- and Whitney's bed for the night. She tells him her name is Ariel, and asks, "Can I call you Dad?" Ariel finds her long-lost mother. But the children are
jealous. Whitney throws a tantrum, then tries -- literally -- to kick Ariel
out of the house. Ken does his ineffectual best to keep the peace.

We never wanted Barbies in our house. But they infiltrated our family
as ruthlessly as ninjas, smuggled in as birthday gifts from less discerning
friends. We acquired a neighing Barbie horse, then were loaned a Barbie car. (I lost my fear of Barbies on a camping trip, when it became a prime sport for my two young daughters to hurl them up a steep rock face and watch them scrape and slither down.)

Our Barbie family begins with three brunet babes,
indistinguishable chorus players whose characters and names rotate. Mostly, they play the role of sisters, good or bad, to Ariel, the Little Mermaid, and the looker of the family. She has -- for the uninitiated -- bright red hair, wide sparkling blue eyes and a perky white smile. I couldn't tell you if she's the genuine Barbie or a Disney offshoot.

Then there's Michelle, a blond punk, her hair shorn off one experimental day with a pair of scissors. Whitney, the angry little sister, arrived in a purple helmet on a bicycle. Ken drifted in, I don't know when, as a hand-me-down from the older sister of a school friend.

With the arrival of Ken, a wussy Malibu type not at all like the British action men of my youth, I have been much in demand on the Barbie front. For our 4-year-old daughter Eliza, there is something indescribably attractive about a grown man playing Barbies -- and in particular, there is great attraction for me in playing Ken.

I read somewhere that a child needs just 20 minutes a day of
personal parental time, on the game of his or her choice, to grow into a
well-rounded American adult. I reckon I can Barbie for an hour.

True, I often groan inwardly when they bob their little heads, clutched in
my daughter's hands, imploring me to join the party. The mere prospect of the game can induce a heavy urge to go to sleep, surf the Web or reach reflexively for the liquor cabinet. I will ask to play cards or a board game, anything but Bar ... then pinch myself awake, summoning my daddy conscience. This is, after all, a passing moment of childhood, one I should cherish. In years to come, utters my better self, I will long for the days when a little voice cried out for me to play Barbies.

And on occasion, a kind of magic ensues, and the little plastic faces
come alive for both of us, laughing, crying, snorting in anger. They are contract players in a studio where we pull all the strings, Eliza as
director and screenwriter, while I manage the talent. She sets the parameters for the play,
selects a part and a premise and then calls for action.

Now I realize that the game carries a particular responsibility. Here, I am defining for
my daughter the relationship between homme and femme. It is, of course, part of the father's broader job description to cultivate a healthy
relationship with his daughter, to lay a steady groundwork for her future relationships with men.

So I play my part with a mind to showing her how to get along with a guy, with perhaps some subtle indication of the kind of guy she might want to get along with. This amounts to making women equal, even dominant, partners in the scheme of things. In the Barbie world, the women must be able to tell a man what to do.

So, my Ken is, by popular and persistent demand, nice, but stupid.

Sure, he has $20 good looks, but his cheek has two inky scars from an instant marker and his forelock, after many washings, shoots straight up off his head, giving him a permanently surprised look. He's got hunky shoulders, but he moves stiffly, stoopingly, stupidly.

Nice, but stupid. I tend to defend Ken as well-meaning, but overloaded;
well-intentioned, but a little goofy. For Eliza he's simply nice, but stupid.
Sometimes, he is straightforwardly a bumpkin, a clown. The children run
circles around him. He is made speechless by beautiful women and is apt to
take refuge in the kitchen.

He's a man in a woman's world, constantly surrounded by at least four or five of them, with busts and buns of exceptional dimensions. He loses his
trousers and finds himself naked in public places -- in fact, he lost them long
ago, somewhere in the back of the toy cupboard.

Our early stories were borrowed from movie scripts. The Barbies ran
shrieking from dinosaurs, then challenged the beasts, mostly by bonking their heads with a small toy drum. But lately, our scenarios are family dramas, featuring the kind of dysfunctional families long cherished by the best storytellers, from Roald Dahl to the Brothers Grimm.

In a recent fit of pique, Whitney moved all her plastic animals -- an entire zoo -- into the doll house, backed up by Ariel, over Ken's desperate protests. Ariel, meanwhile, is frequently an adopted daughter with a mysterious past. She arrives at the door, pursued by taunting, invisible boys who taunt and shout, "Redhead! Redhead!" Ken runs to the rescue and shoos them away.

She recently urged her parents to put salt in the backyard pool,
but she won't go swimming with her sisters. Instead, she sits demurely at the
side. Played by Eliza, Ariel is silent and elusive, righteous and well-behaved. And she has a stunning secret. At the beach one day, Ken stumbles upon his daughter swimming; it turns out she's a mermaid, with a fishy tail. Her sisters know her story, but when Ken tells his wife, she doesn't believe a word of it. He falls in the sea and begins to cough and drown. Ariel saves him.

At one point, Ken is encouraged to break all the rules of a civilized
family and tell Ariel that she's more beautiful than the rest of his
daughters. The family erupts; Whitney is in an absolute fury, and so are her
siblings. But my Ken is never, never tough on his daughters. Once, he sent Whitney to her room when, by common consent, she was being particularly bad. On rare occasions, he rises to a challenge and asserts himself as head of the family; at times, he's a calming influence.

The ruling authority in my childhood, as our parents divorced and added two half-brothers, was my mother. She didn't kick a ball around with us; I remember her, perhaps mistakenly, as determinedly unathletic. But I loved to cook with my mother, and I love to have my daughters cook with me in the old-fashioned way, baking hot, buttery English dishes in a California kitchen.

So Ken, in one of our better stories, is a baker. A busy but gifted chef whom the Queen calls upon every morning for fresh croissants. Two sisters of ravishing beauty move in upstairs. Ken, unable to express himself
in words, delivers gifts of bread and coffee cake, but starts to get his
orders mixed up.

And then life starts to get on top of him. The Queen orders a
chocolate cake, a great honor, but it must be ready for tonight or she'll
cut off his head. Ken's mother, Michelle (with the shorn head) pays a
visit and announces she has sold her house. She's moving in, and she'll
take Ken's bedroom, thank you. He'll sleep in the bakery. Ken's mother
declares her love for Ariel; Ken nervously puts a stop to the plot line.

These days, Ken has been sitting around with the stuffed animals, listening to showtunes. He's found something to wear: an old bra, wrapped around him like a toga.

Just the other day, he actually got to be king, attired for the first time ever in a green, fur-lined robe. Eliza's older sister stepped in, prepared to be Ken. "No," said Eliza. "Dad's Ken, because he's stupid."

I am presuming that she meant that my stupid Ken is the best Ken of all. After all, not everyone can do Hamlet, either.

Tim Cornwell is a writer and reporter who covers the United States for the Scotsman in Edinburgh, as well as other newspapers and magazines.