Not this year, dear

I have very little interest in sex -- and neither do millions of other Americans. So where are our support groups? 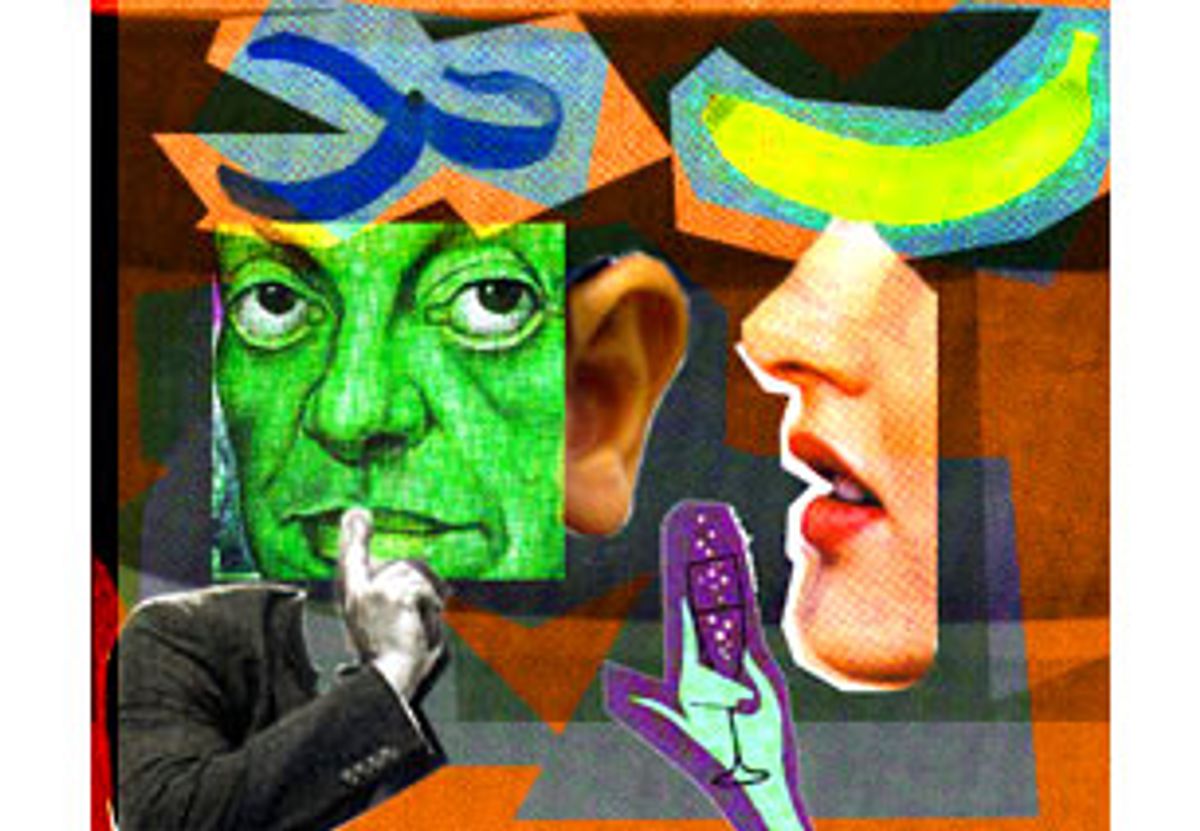 I've never had much of a sex drive. When other teenagers were doing it
three, four, dammit even five times a night, once was enough for me. And
after starting to live with my wife, once a night quickly yielded to once
every few days, once a week, and now, at age 49, it's basically an annual
event.

What is low sex drive? It's a lack of lust, a difficulty in getting turned on.
For example, although you may find a woman attractive, you rarely feel the urge,
the craving to make love to her. This lack of desire is altogether distinct
from impotence or performance anxiety or myriad other afflictions that our
psychologists have cataloged under the rubric of sexual dysfunction. For
instance, men who suffer from low sex drive don't necessarily have trouble
getting erections. On the other hand, a man suffering from erectile
dysfunction could still feel a powerful sense of lust toward his partner,
but his body might betray this desire.

I'd always thought I was something of an aberration, that most guys were in a nearly constant state of semi-erection.
But this year I learned I have plenty of company. According to a major
survey reported in the Feb. 10 Journal of the American Medical Association,
approximately 15 percent of men 18-59 have low sexual desire.

Yet the prevalence of low sex drive remains largely undiscussed. Bernard Apfelbaum, director of the Berkeley Sex Therapy Group in California, says that
most guys don't like to talk about it, even in therapy. "Men are ashamed. They're embarrassed to talk about anything that smacks of their being inadequate."

But now with my newfound statistics and a growing acceptance of my fate, I'm ready to tell my story -- albeit under the protection of a pseudonym, largely for my wife's.

I feel sorry for my wife, a good and attractive woman who deserves a sex
life. Who knows, she may have one, just not with her husband. She might be
having an affair. Contemplating this scares me
because an affair might make her more likely to leave me. And as a balding
49-year-old with minimal sex drive, I worry that I'd have trouble finding a
good woman to grow old with. That's especially likely with today's older
women, who rightfully feel entitled to a rich sex life.

After just a year together, my wife was hotter-to-trot than ever, but I
already regarded sex as more of an obligation than a pleasure. So we started a
years-long effort to stir up my juices: going to bed early, varying
positions, watching porn flicks, reading marital manuals. There was nothing
for me in books, no matter how optimistic the title: "Rekindling Desire"
rekindled nothing. Never did I have the urge to thrust her on the bed and
make mad passionate love. The books recommended romantic getaways, so my
wife and I lolled in bed-and-breakfasts to the sounds of ocean waves rolling
ashore -- but desire never seized me. The books urged me to communicate my
emotional needs, sexual desires and fantasies to my wife. I did this -- in fact, I
was the much more emotionally open lover -- but even all the kinky
confessions and heart-felt talks never stirred that ineffable hunger to cross
into the animal netherworld of the libido. Sex seemed like a big bother -- nothing more, nothing less.

I was wracked with shame and guilt. "Even that can't turn me on," I'd
lament after each attempted recipe for lust.

We saw a big-shot sex therapist but were helped neither by the
psychoanalytic explanations (e.g., a dominating mother) nor the exercises
(20 minutes of non-genital touching with and without peacock feathers). The
therapy's main positive effect was that as soon as we'd leave the
therapist's office we'd laugh at his beside-the-point nostrums. His
$115-per-hour fee wasn't as funny.

More recently, I've searched the Net's most powerful metasearch engines on
such terms as "low libido, "low sex drive" and the official term for my
disorder, "hypoactive sexual desire disorder." But I find only the
aforementioned advice or advertisements for "aphrodisiacs," none of which
have good data supporting their effectiveness and safety. Bernie
Zilbergeld, sex therapist and author of "The New Male
Sexuality" (Revised edition, Crown, 1999), concurs. "Unfortunately, there is
no Viagra for low sex drive," he says. Viagra may give you an erection but it
doesn't create the desire to use it.

I thought that maybe our problem was sexual incompatibility, and that with
the right woman, things would be different. So I had affairs, but after a
short time with each woman, I found my lust for her waning even more
quickly than it had with my wife, so I resumed monogamy. Now, except for
that get-together with my wife once in a very blue moon, I'm celibate. I suspect that even if Heather
Locklear stood three inches in front of me in a lace negligee, nothing
would stir inside of me.

I know what you're thinking and no, I'm not gay. While intellectually, I
respect the rights of people to sleep with whomever they please, the thought of getting busy with a man
doesn't appeal to me in the least. I do like women -- especially my wife.
I even love them. But not in such a way that when faced with the
possibility of our bodies merging in a love-drunken tangle, no lust rises within me.

The confounding thing is that there's nothing wrong with my plumbing. I've
been cardiovascularly and neurologically checked out, I still play full-court basketball and can
masturbate quite well, thank you. (Although such self-pleasuring always includes fantasies of women, it never translates to an urge to make love with real women. The work of turning a woman on usually is enough to dissipate what little lust had been aroused.) Even so, I was tempted to try Viagra
until my friend complained that it made his head throb more than his penis.
And I knew that Viagra was really beside the point -- even if it could
give me a hard-on, it wouldn't alter my abiding sense of apathy to
the act of making love.

Nor does anything psychological inhibit me from enjoying sex. As an
atheist, there are no religious strictures tugging at my unconscious. And
so far as I know, I have no sexual trauma buried in my childhood despite a
good shrink's efforts to unearth one.

Is the problem that my wife and I have simply grown stale? Or that my wife has some particularly unsettling sexual predilections? No on both counts. My wife, if I give her half a chance, is a good lover. And our marriage,
outside of bed, is better than most. After 25 years together, we still
would rather hang out with each other than with anyone else.
Yet I have more interest in anything than in sex -- I'd rather clean out
the basement than make love.

After years of contemplating my libido, I'm absolutely convinced that my problem is physiological: I simply have a low sex drive. And until I started to do the research for this article, it felt
completely hopeless.

Apfelbaum suggests that the best solution is to "accept it." If you feel you're
not going to be an ace performer (strong sexual urges, erections and
orgasms), you should trust your instinct and redefine sex as primarily
cuddling and closeness. He advises his clients to admit to their
partners that they don't get turned on anymore and acknowledge any
feelings of guilt and anxiety. Apfelbaum has
found that the partner will often respond with acceptance of a sensual life
in which cuddling and touching are ends in themselves. And with the
pressure off, some couples even find that their desire to "do it" increases.

Unfortunately, that prescription was virtually the same as our sex
therapist gave us 20 years ago. Yeah, we accepted the lack of sexuality,
but it didn't motivate us to cuddle. It motivated us to spend our
recreational time reading novels and watching TV. Indeed, sex therapy fails
for plenty of people with low-sex desire. Zilbergeld says that what Masters &
Johnson found 20 years ago is still true today: Low sexual desire has the
lowest cure rate of all sexual dysfunctions.

But there is a ray of hope. Of late, molecular medicine has made
truly extraordinary progress; for example, scientists have recently found a
gene that when inserted into mice, increases their intelligence. If medical
science can do that, I'm hoping they can find a molecular aphrodisiac to
awaken me.

In fact, scientists are optimistic about that very thing. Zilbergeld
says, "What they're doing with physiological research is incredible. I
wouldn't be surprised if there's something on the market in the next 10-15
years that will light people's fires."

Dr. James Fallon, professor of anatomy and neurobiology at the University
of California, Irvine, is more specific. He predicts that within 10 years,
we'll have a hormone cocktail that will increase sexual ardor. "We're very
close. And that's not just happy talk ... We're like giddy kids at the
possibility."

The author would welcome hearing how other men have dealt with their low sex drive. Reach him at thinker1@hotmail.com