Put your paws together for the master of morphic resonance. 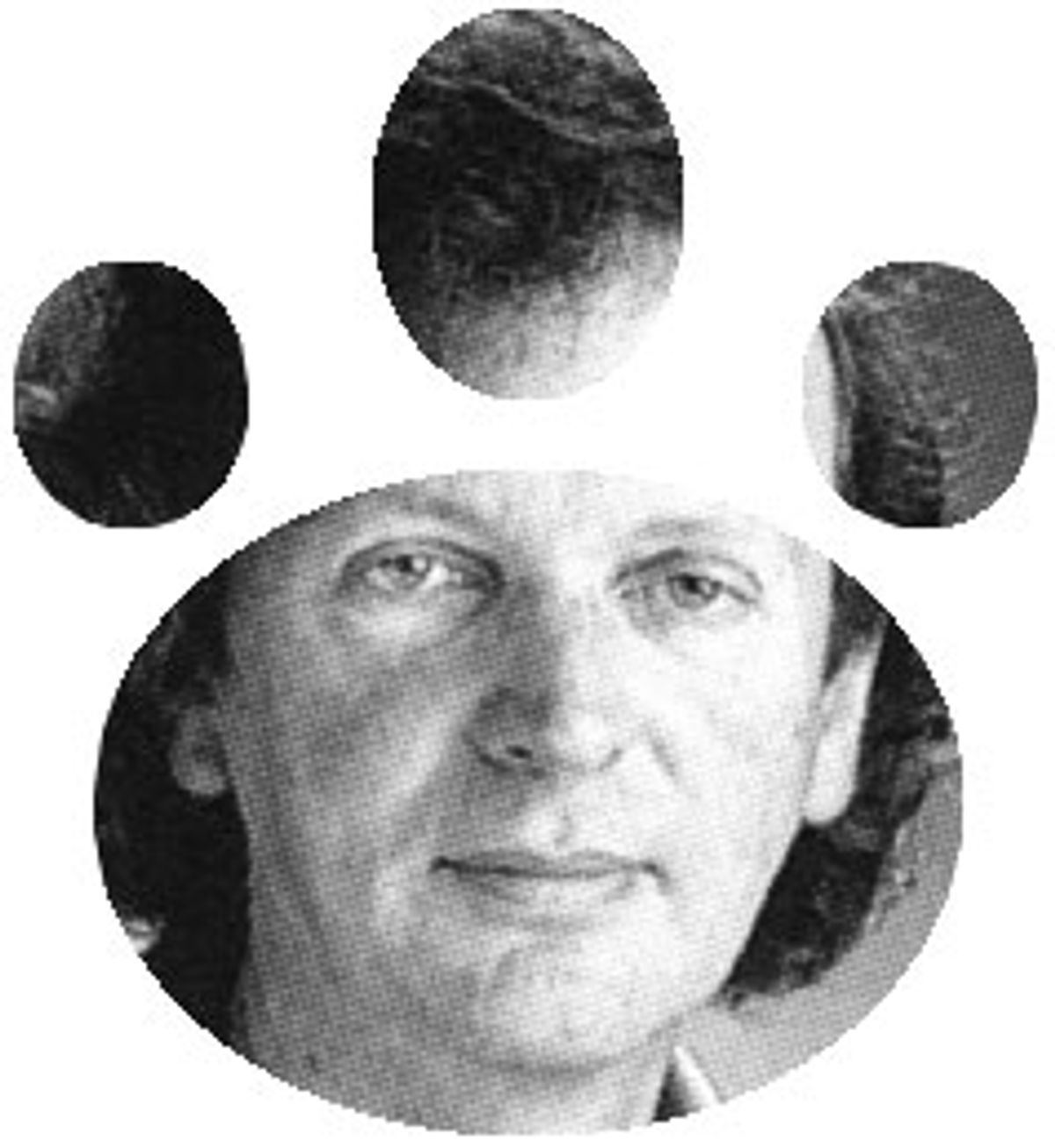 If you've seen Rupert Sheldrake plugging his book "Dogs That Know When
Their Owners Are Coming Home: And Other Unexplained Powers of Animals" on
your television, you may assume he's just some new-age Dr. Dolittle,
exploring your pooch and kitty's potential as mind readers. There's much more
to Sheldrake than animalistic ESP. He is as brilliantly "out there" as
Wilhelm Reich or Ludwig Wittgenstein. Nearly 21 years ago, Sheldrake postulated
in his first book, "A New Science of Life," that there is no such thing
as natural "laws." What the universe is, in fact, is an evolving system of habits.

And habits can be broken.

Before we examine Sheldrake's theory, know that he was born in Newark-on-Trent, Nottinghamshire, in the English Midlands. He went to an
Anglican boarding school and then took biology at Cambridge, studying "life" by killing animals and then grinding them up to extract their
DNA. This was troubling. Rescue came when a friend turned him on to Goethe.
This old German's 18th century vision of "holistic science" appealed to
the young Brit very much. Sheldrake used Goethe to investigate how the lilies
of the field actually become lilies of the field.

"The instructors said that
all morphogenesis is genetically programmed," Sheldrake says now. "They said
different species just follow the instruction in their genes. But a few
moments' reflection show that this reply is inadequate. All the cells of the
body contain the same genes. In your body, the same genetic program is
present in your eye cells, liver cells and the cells in your arms. The ones
in your legs. But if they are all programmed identically, how do they develop
so differently?"

Sheldrake discovered that around 1920, three biologists -- Hans Spemann,
Alexander Gurwitsch and Paul Weiss -- independently proposed that morphogenesis
is organized by fields. (Albert Einstein extended this field concept to include the
gravitational field that holds the universe together.) After Sheldrake took
several extended trips to India, he developed his theory of "morphic resonance." He put forth the notion that morphic fields influence everything from plant growth to migration patterns to what C.G. Jung called the "collective unconscious." He wrote, "As time goes on, each type of organism forms a special kind of cumulative collective memory. The regularities of nature are therefore habitual. Things are as they are because they were as they were."

He discovered data that backed him. For example, when mice in a research
facility in London were taught to improve their maze-running skills,
"unschooled" mice in a Paris lab began better navigating their mazes as well.
On a South Pacific island, a gourmet monkey discovered that washing the dirt
off his raw potato was healthy and made the spud taste better. On
islands throughout the archipelago, monkeys simultaneously began washing their
potatoes. This means the truism that ideas are "just in the air" has
validity.

"The whole point about morphic fields is that nature as we know it is
probabilistic," Sheldrake says. "It could go one way or it could go
another. Anything which influenced or imposed pattern upon chance could bring
about a causative influence in nature not violating any law of physics." He
then mentions how a flock of day-old chicks can imprint a random-movement
robot and then will it to stop moving randomly. Indeed, he tells how a random
noise generator ceased producing random noise during the five minutes the
O.J. Simpson trial verdict was broadcast.

If Sheldrake sounds like a crackpot, he
is. But delightfully so. Mad scientists are a thing of the past. Sheldrake
makes an off-the-cuff comment that he discovered from old radar records that
the speed of light slowed during the 1940s. Then he points out that it was
Francis Bacon who believed scientists should be the new priesthood. And
that's how science has functioned ever since -- most of our modern priests are
"busy doing genetic research for Monsanto." Indeed, the former editor of
Nature, John Maddox -- "the 'pope of science,'" Sheldrake laughs
-- called Sheldrake a "lapsed Jesuit attacking the church of science."
Maddox advocated literally burning Sheldrake's books as heresy,
yelling, "He deserves to be condemned for the exact same reasons the pope
condemned Galileo."

It figures that California became a haven for Sheldrake in the early 1990s.
His views were embraced by Terence McKenna -- co-author of "The Invisible Landscape: Mind, Hallucinogens, and the I Ching" -- a man who believes
Mother Earth (aka Gaia) speaks to us through hallucinogenic mushrooms that
came as spores from outer space. Privately, Sheldrake enjoyed partaking in a
chemical trip or two himself, so he was sympathetic to McKenna's ravings. But
publicly, the Brit always seemed stiff whenever the two shared a podium (or
toadstool).

In the mid-1990s, Sheldrake began to distance himself from the California scene and just studied the pooches. After being urged for years to find more "empirical evidence" of
morphic fields, he became a Captain Kangaroo of sorts, encouraging hundreds
of schoolkids worldwide to document how the family pet tuned into morphic
fields. He's collected irrefutable evidence that Lassie almost always knows
when her master is returning home. Spot can sense forthcoming epileptic
attacks. Rover sniffs out cancer. Canines even forecast earthquakes. "In China, the government monitors earthquakes by dogs," Sheldrake says. "But when I ran
this by the American insurance industry, they said, 'You know, you could maybe
save lives with earthquake-sensing dogs, but we're a general insurance
company. Go talk to the life insurance people.'"

In 1996, Sheldrake paused in his dogged research to hook up with renegade
priest Matthew Fox and hold public discourses on God (which is you-know-what
spelled backward). After all, the Almighty seems to be where the larger
implications of morphic resonance head. What if morphic resonance encompasses
the narrative direction of our lives? Perhaps destiny is more than just some
literary conceit. Maybe karma is not only instant, but real as well.
Perhaps we can even actually influence God herself as easily as chicks can
stop random-movement robots.

Ah. These ideas just bounce off Sheldrake. He doesn't bite. After all, his
God is, well, British. "I belong to the Church of England," he says. He talks
about his beliefs, and he buys the whole thing -- Father, Son, Holy Ghost.
Rupert Sheldrake is only a heretic in the Church of Science.

But in the end, Sheldrake successfully defends the profundity of his current
animal work. "The thing about dogs," he says, "although some people might
think this is trivial from a scientific point of view, it's actually exactly
the opposite. Science believes animals and plants are all just unconscious
automatons. The whole of nature is unconscious except for human beings. We're
the only smart guys in the whole universe and somehow figured out how
everything works. And that means through science we can manipulate nature and
improve products for corporations."

Then Rupert Sheldrake pauses and says,
"Descartes believed the only kind of mind was the conscious mind. Then Freud
reinvented the unconscious. Then Jung said it's not just a personal
unconscious but a collective unconscious. Morphic resonance shows us that our
very souls are connected with those of others and bound up with the world
around us."