"As Good as It Gets" goes downtown in a lame stab at indie credibility from hack director Joel Schumacher. 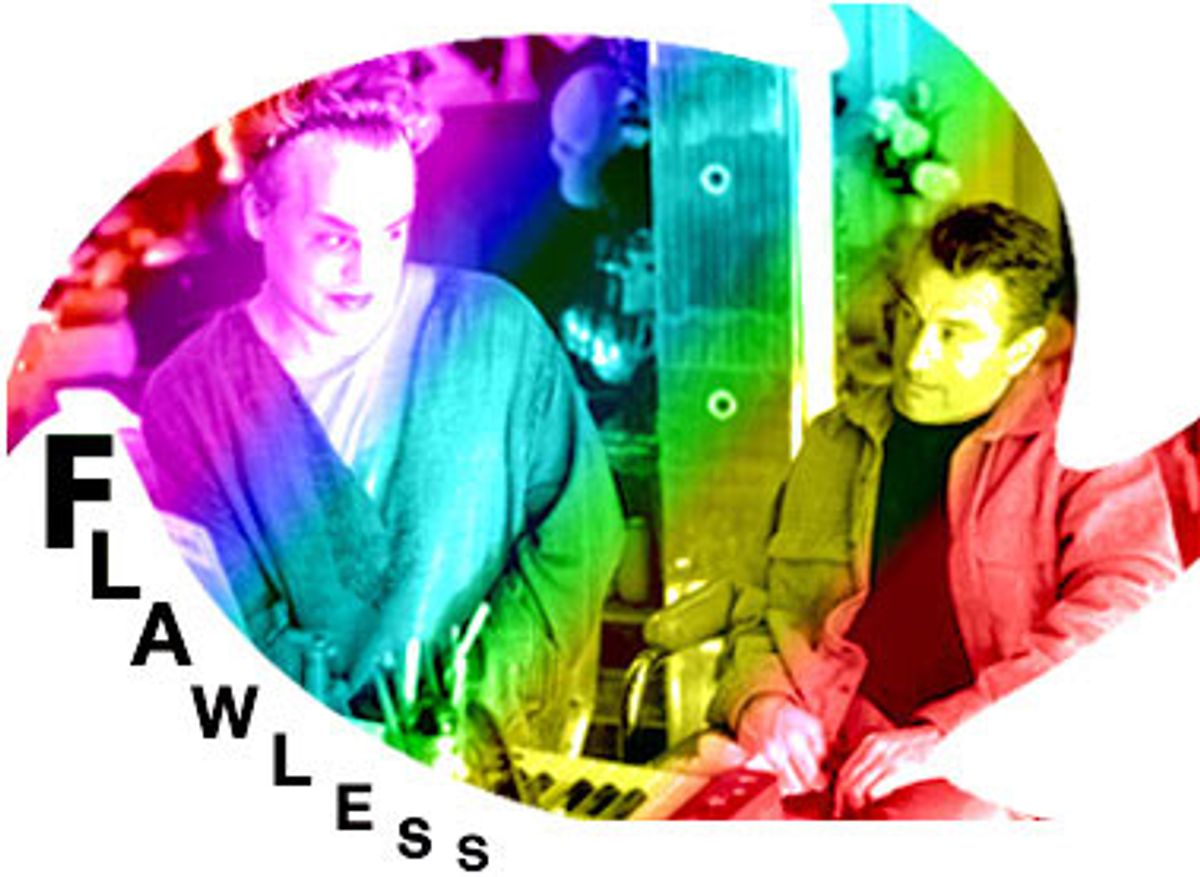 In a movie obsessed with the question of what kind of man has balls and what kind doesn't, Joel Schumacher shows he's got what it takes. You need a pair of huge, hairy ones to make a picture this bad and call it "Flawless."

From the opening hand-held camera shots and jagged editing, "Flawless" plays like Schumacher's bid for indie credibility. The director appears to want to disassociate himself from the big-budget pictures that have been his recent work, "8 Millimeter" and the jaw-droppingly awful pair of films that killed off the "Batman" franchise. (Thanks, Joel. Batman fans the world over salute you.) But it takes more than hand-held cinematography and scene after scene set in dingy New York apartments to shake the formula out of a filmmaker who's pretty much made it the basis of his career.

"Flawless" is built on a formula -- several formulas. There's the high-concept one about the unlikely buddies. A retired security guard (Robert De Niro) suffers a stroke and, for physical therapy, takes singing lessons from a drag queen (Philip Seymour Hoffman) who lives in his building. When it's not trying to be the downtown "As Good as It Gets," it's alternately a gritty urban crime thriller and Joan Crawford-with-a-dick melodrama.

De Niro's Walt is your standard-issue dem, dese and dose regular guy, given to yelling "Shut up, you fucking faggot!" out the window when Hoffman's Rusty and his "girlfriends" are singing. Once a week or so, Walt hangs around a dance club and goes home with a hooker (Wanda De Jesus), kidding himself that the money he gives her for "rent" doesn't make her a whore.

Rusty is the compendium of every self-pitying sentimental clichi about homosexuals you've ever encountered. He wants to think of himself as an artist, but he's really just a lonely queen, filling his life up with glitz and catty remarks to disguise the emptiness within. So desperate for companionship is he (listen to me, I sound like a '30s radio soap) that he allows himself to be beaten by his (married) boyfriend, whom he supplies with money to boot. It turns out that Walt and Rusty are both suffering, lonely people in the big city who -- surprise! -- have more in common with each other than they know. Essentially it's a story about how well a can of Schlitz can go with Dubonnet.

Schumacher, who wrote the film as well as directed it, seems to realize how sentimental this is. There's a subplot about a drug lord who's been ripped off and is convinced someone in the building has his stolen loot. Every few minutes we get to see this guy's goons harass a tenant or kill an old woman's canary, apparently to give the film some "edge." Given these distractions, the friendship isn't so much developed as presented in seemingly disconnected stages.

Schumacher started in films as a costume designer; he clearly has a fondness for the world of drag, and he's cast a trio of real drag performers (Raven O, Joey Arias and Jackie Beat) as friends of Rusty's. But he hasn't given them, or Hoffman, anything beyond third-hand bitchery -- "Miss Thing, shove a land mine in that hole you call a mouth" and the like -- as character. Schumacher doesn't allow these performers time to find a rhythm or space to project a persona. He shoves them and the calculated outrageousness of their dialogue at the audience the way "blue" Broadway comedies used to shove naughty jokes at tourists. He pushes them to go over the top, to become screeching and hysterical until we might be seeing them as Walt does: a group of screeching, whiny faggots.

De Niro doesn't overdo the stroke stuff -- the stilted walk, the choked voice coming out of the side of his mouth -- but he doesn't have to in order for it to be a bummer drag. It's not his fault. It's meant as a gag when one of the drag queens gives Walt a videotape of "My Left Foot," but the gag blows up in the movie's face. Daniel Day-Lewis' transcendent performance in that movie is the quintessence of playing the person and not the handicap. By contrast, Schumacher has conceived of Walt as nothing but a handicap. His stunted physical condition is meant to be a symbol of his stunted inward condition: He's a representative of middle-class bigots and conservatives who make judgments without personal knowledge of the people they're judging. But you can't make that point when you conceive of people as types.

As Rusty, Philip Seymour Hoffman is such a game, adventurous actor that he manages to be inventive despite the material. Speaking in a breathy voice in which the "sweeties" and "hmms" sound like little musical refrains, and using his hands to trace the lyricism his pudgy body can't quite manage, Hoffman turns in a performance unlike anything he's ever done. He's the most maternal of queens. When he gets to speak in a normal tone of voice, Hoffman finds a warm, lulling rhythm, without smothering the anxiousness underneath.

The monologues about the hardships suffered by his beloved mother or his lousy, masochistic love life don't do Hoffman any favors. They're drama-queen moments, directed as if they were the hard truth but feeling as if they'd been lifted from a Susan Hayward movie. Hoffman gets through them, somehow still managing to sound like a real person. Drag has sometimes been written about as a masquerade that tells the truth. The writers who've said that might have been predicting what Philip Seymour Hoffman does here. What's underneath his nail polish and kimonos is a lot more real than what's behind Schumacher's ersatz grit.